Did someone say International Bacon Day? You mean that’s just one special day and not every single pork-loving day? Celebrate with this blast from the past: Bacon Jam. It’s spreadable bacon, friends. Yes. We know. You’re welcome. 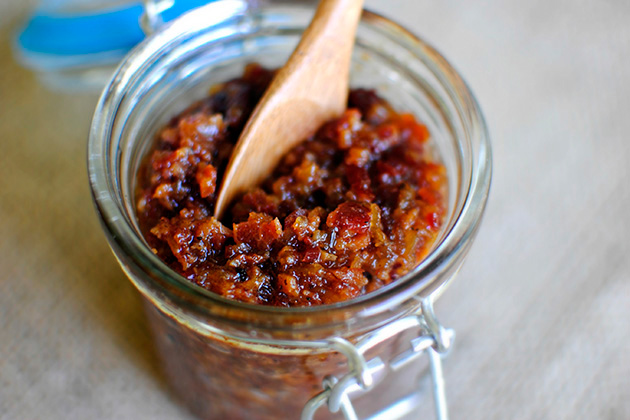 From the very second my eyes laid upon Rebecca’s recipe for Bacon Jam aka “Ooh Mommy” Jam, I was extremely curious and extremely hungry. Over a few days I found myself always coming back to her recipe wondering what it could possibly taste like. Is it an overly sweet jam with chunks of chewy bacon? Is a savory jam that would work slathered on cornbread or smeared on toast with a fried egg on top?

So I told myself to get on with it and make it already, and I’m so glad I did. In Rebecca’s recipe, bacon is slowly cooked with onions and garlic in a delicious concoction of coffee, maple syrup and brown sugar with some tang from cider vinegar until the sauce is thick and the bacon and onions melt in your mouth (just be careful not to burn your tongue when taste testing). After it’s quickly blitzed in a food processor, it’s ready to be served or spread! 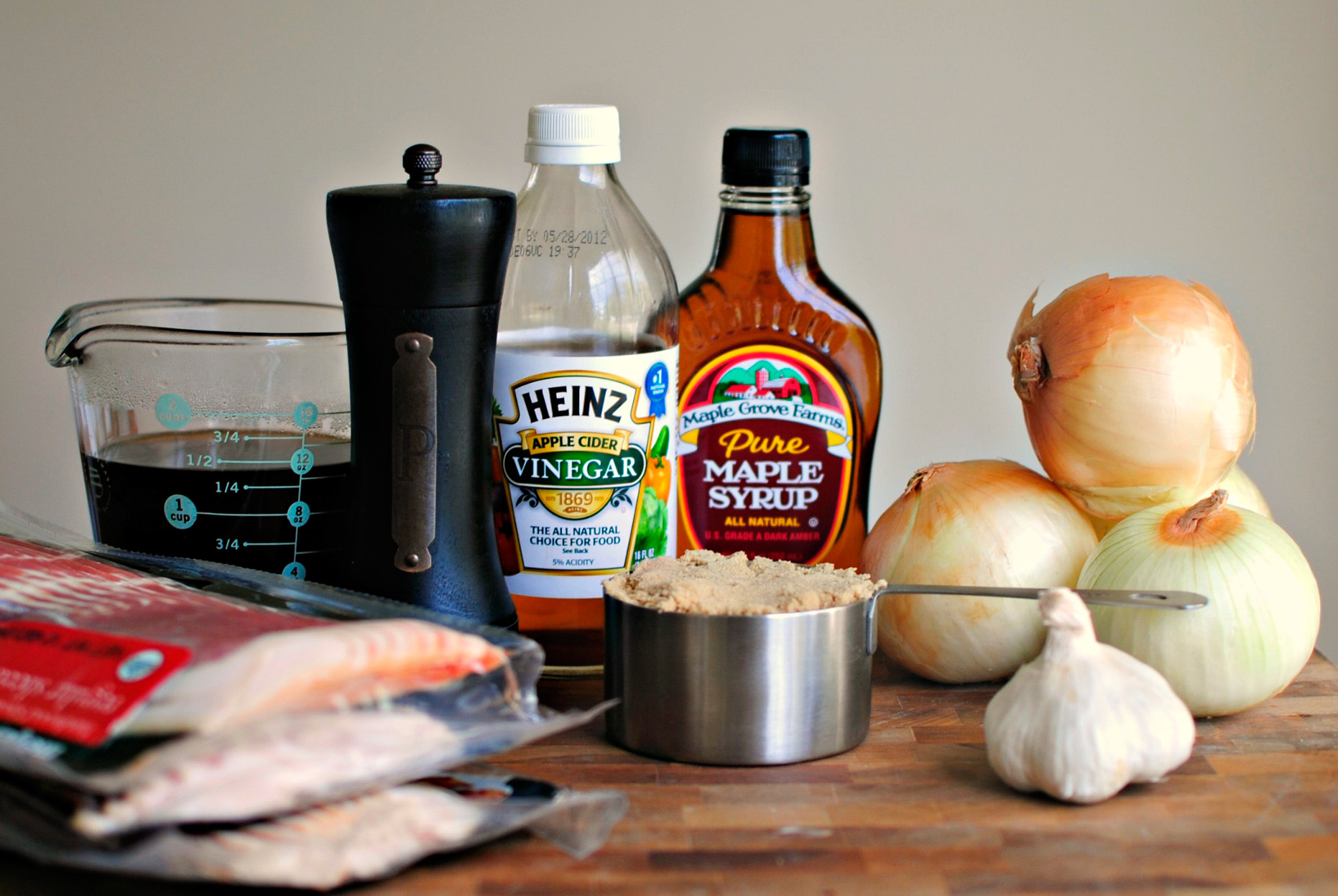 The recipe calls for onions, garlic, brown sugar, maple syrup, cider vinegar, pepper, some strong coffee, and of course, bacon. Three whopping pounds of bacon will be needed. It sounds like a lot but this makes a lot of jam! 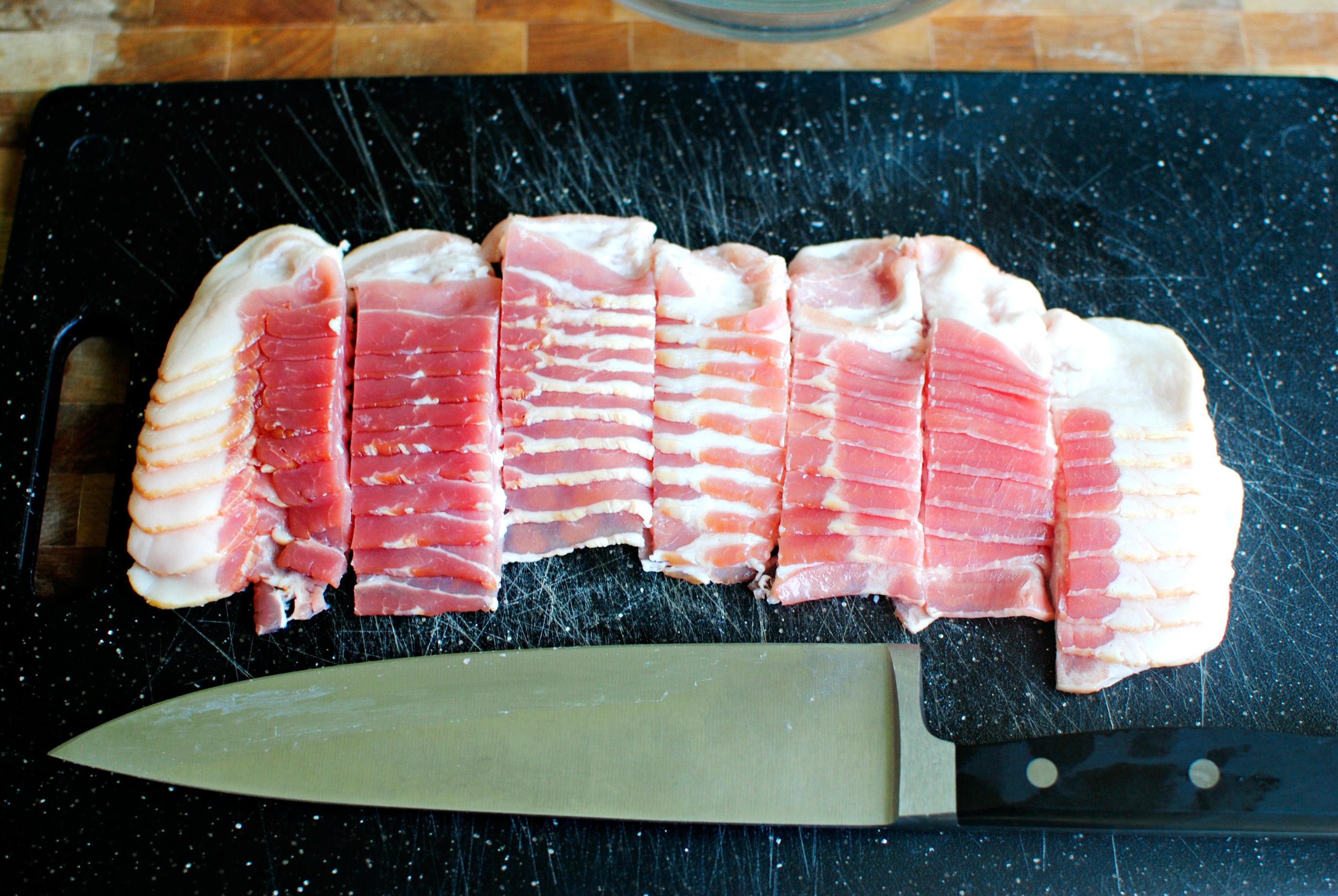 With a sharp knife, slice the bacon into one-inch pieces. 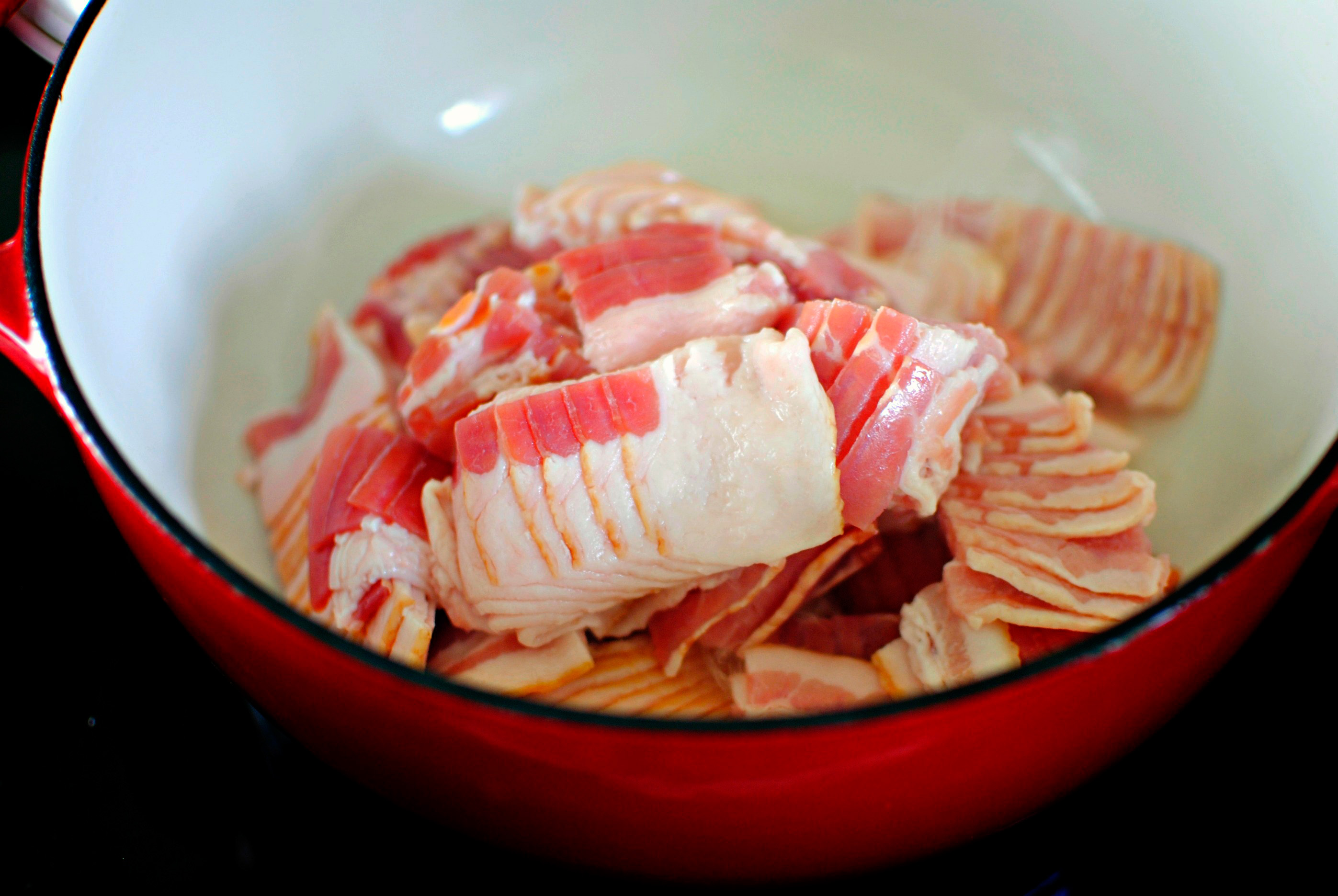 In a large pot or Dutch oven, cook the bacon in its own drippings until crispy and fully cooked. 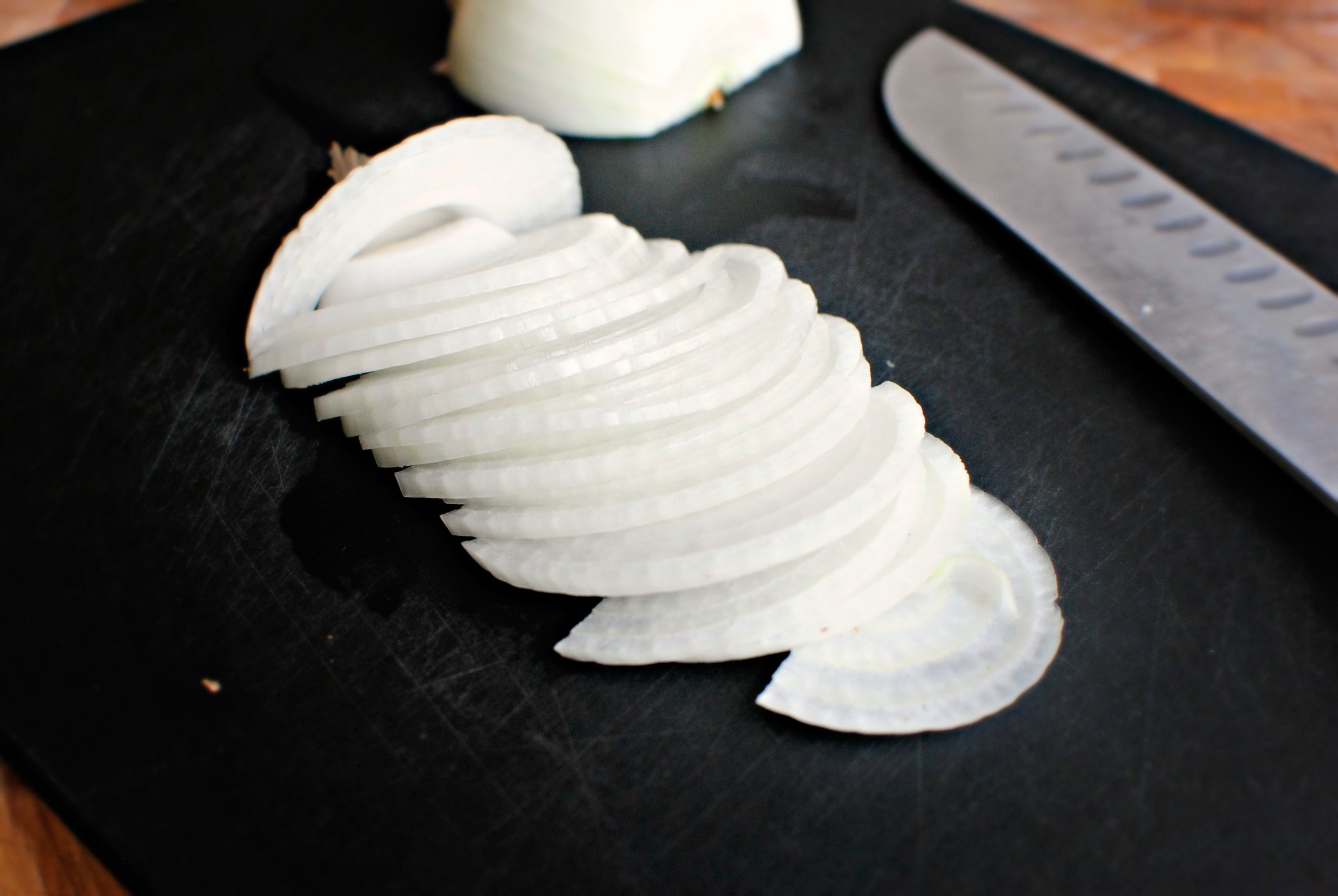 In the meantime, thinly slice up the four onions. Rebecca’s recipe calls for yellow onions, but I had a big sack of sweet onions so I used those instead. But either type of onions will work in this recipe. 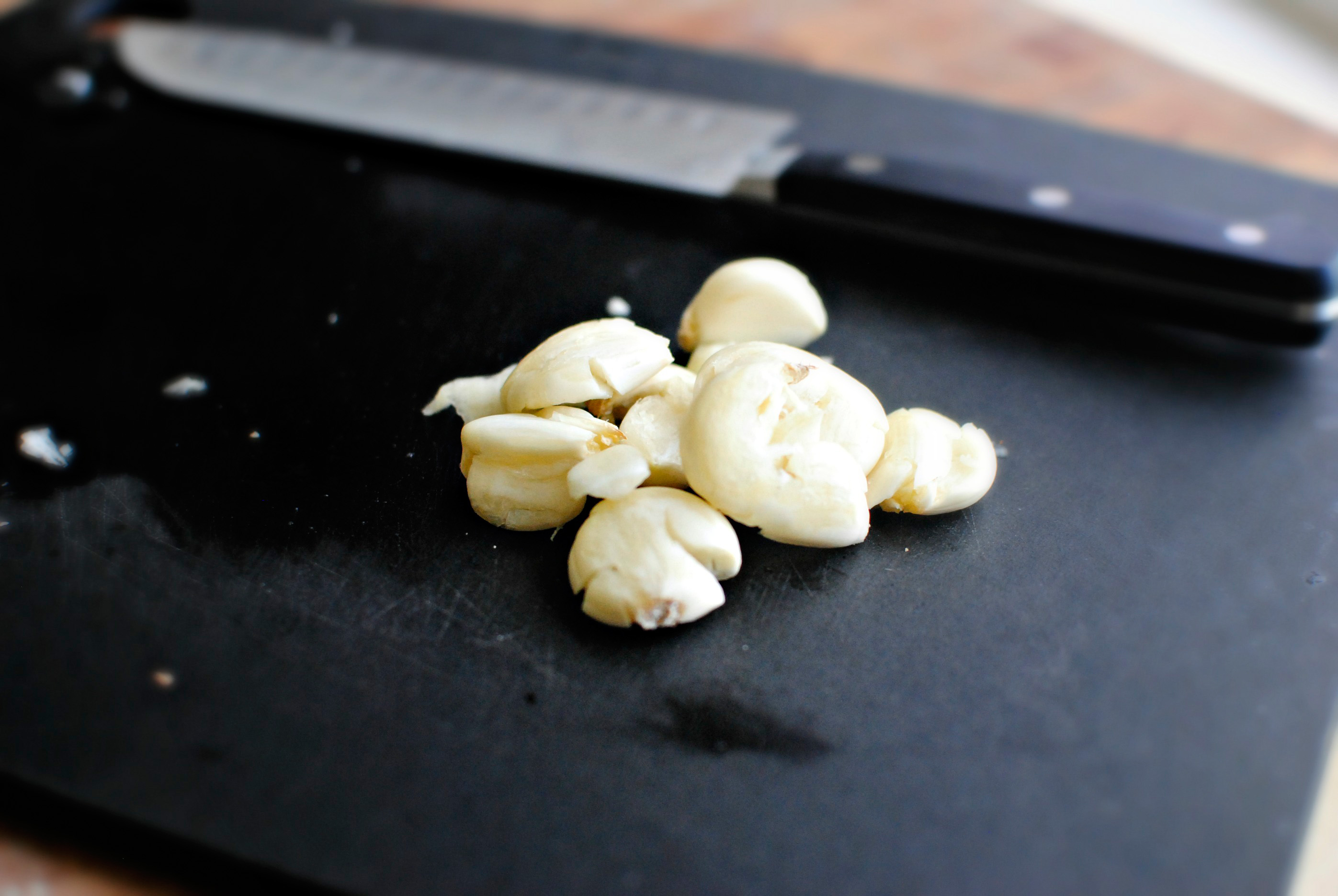 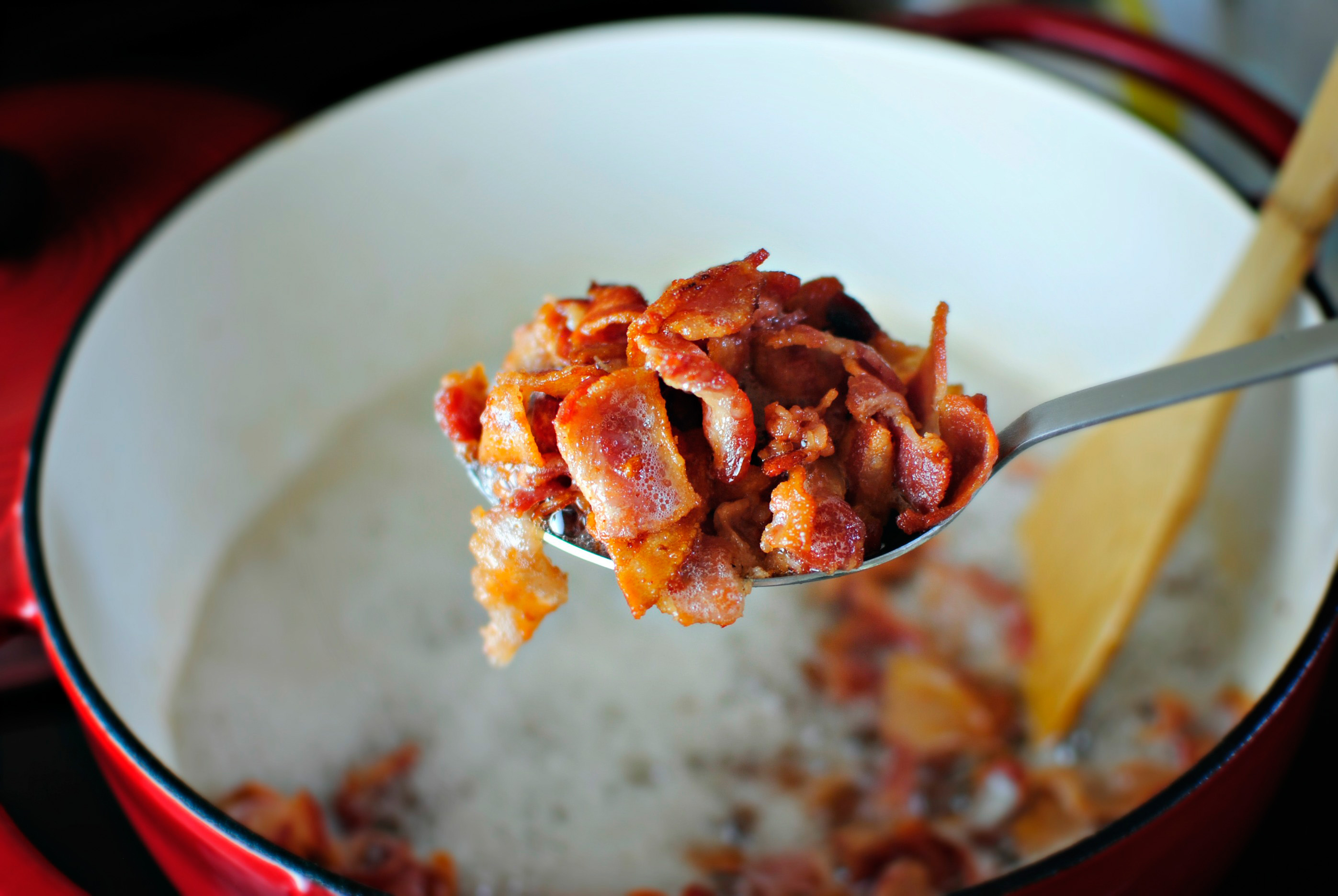 Remove the bacon with a slotted spoon once it’s golden. 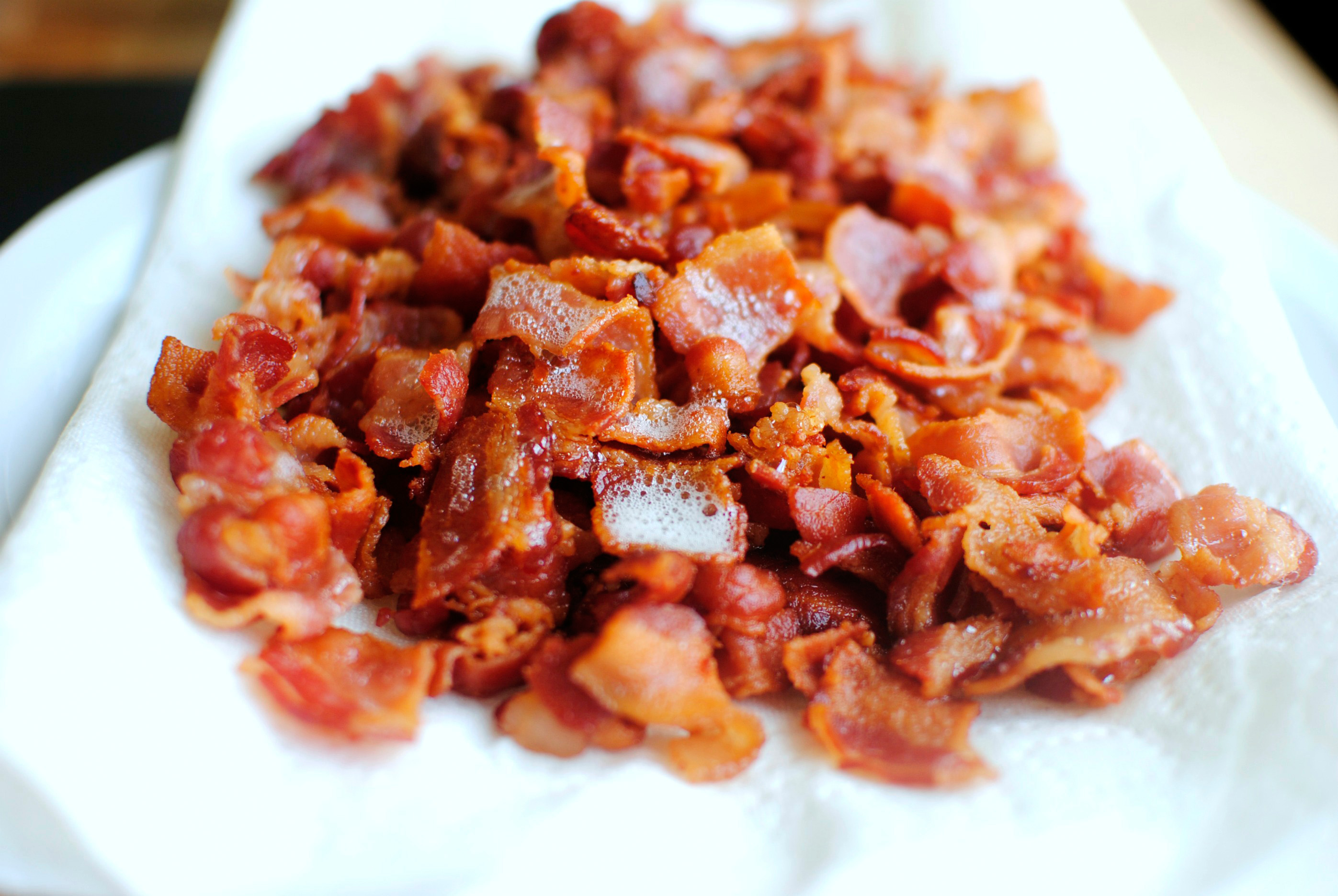 Drain it on a plate lined with paper towel. 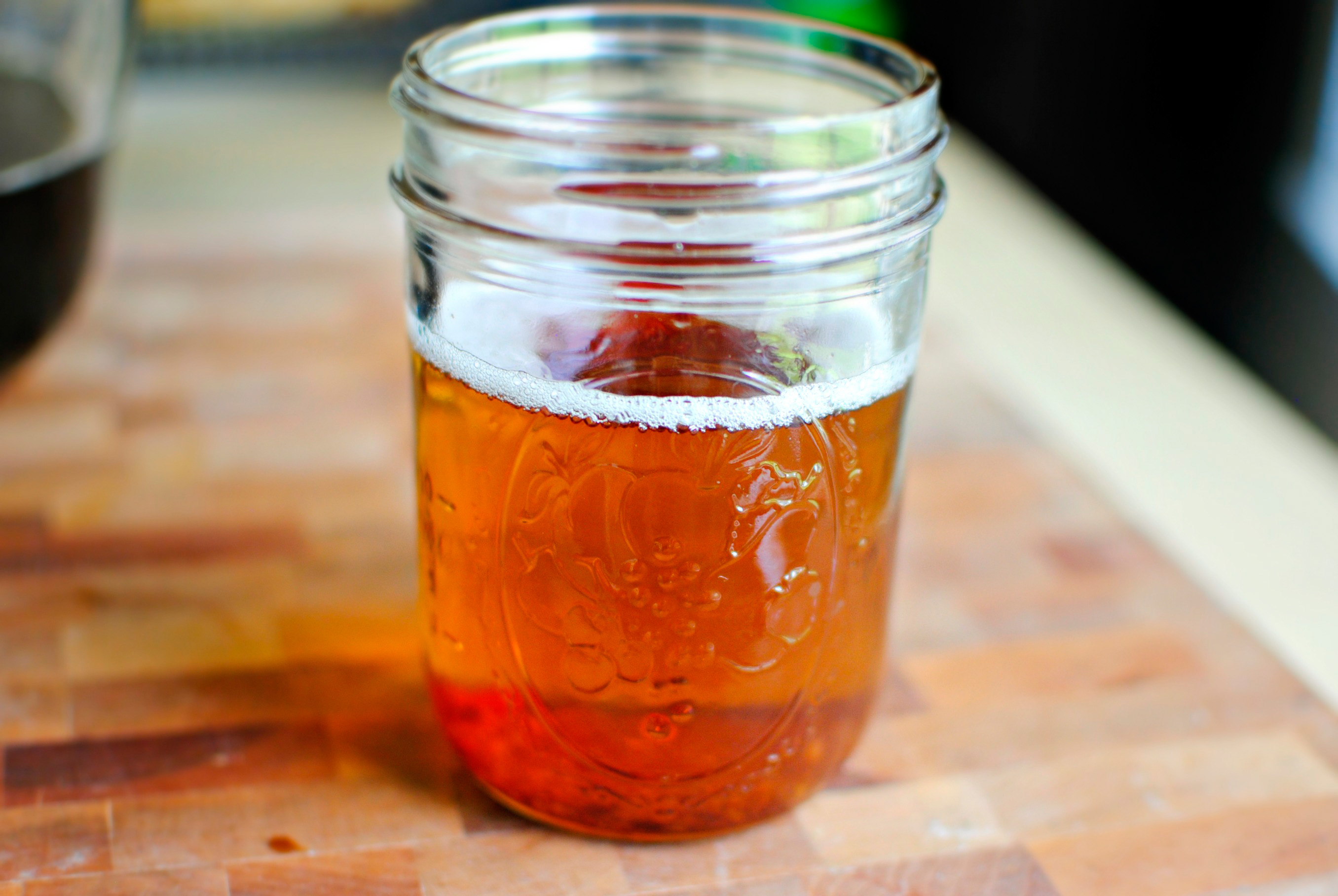 Spoon most of the bacon fat into a heat-safe container with a tight-fitting lid and once the drippings have cooled, store it in the fridge. To quote Rebecca, “That’s too much flavor to trash!” Agreed! 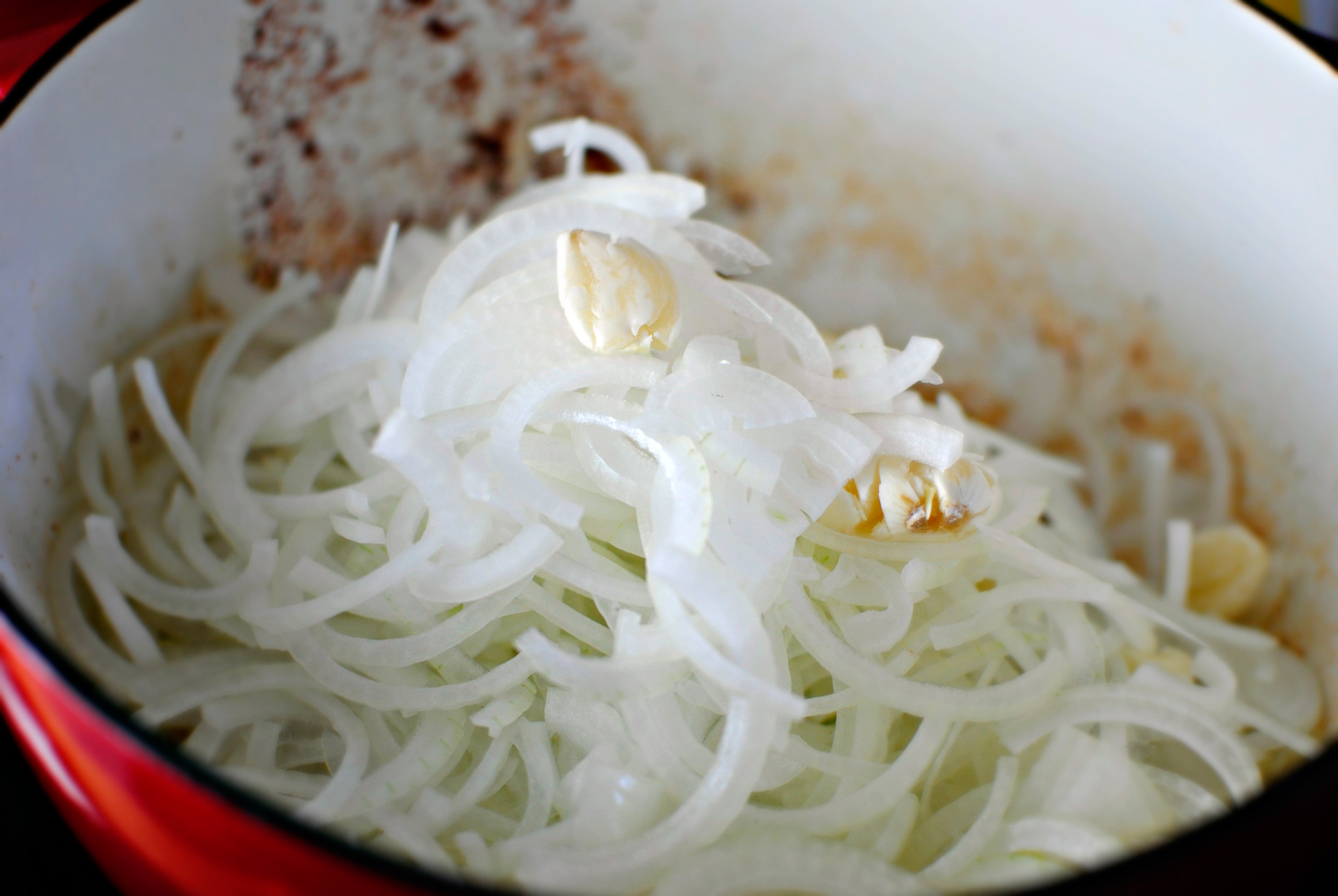 After most of the bacon fat has been removed, place the Dutch oven back over medium-high heat and add in the sliced onions and smashed garlic. Reduce the heat to medium and continue to cook low and slow, stirring occasionally. 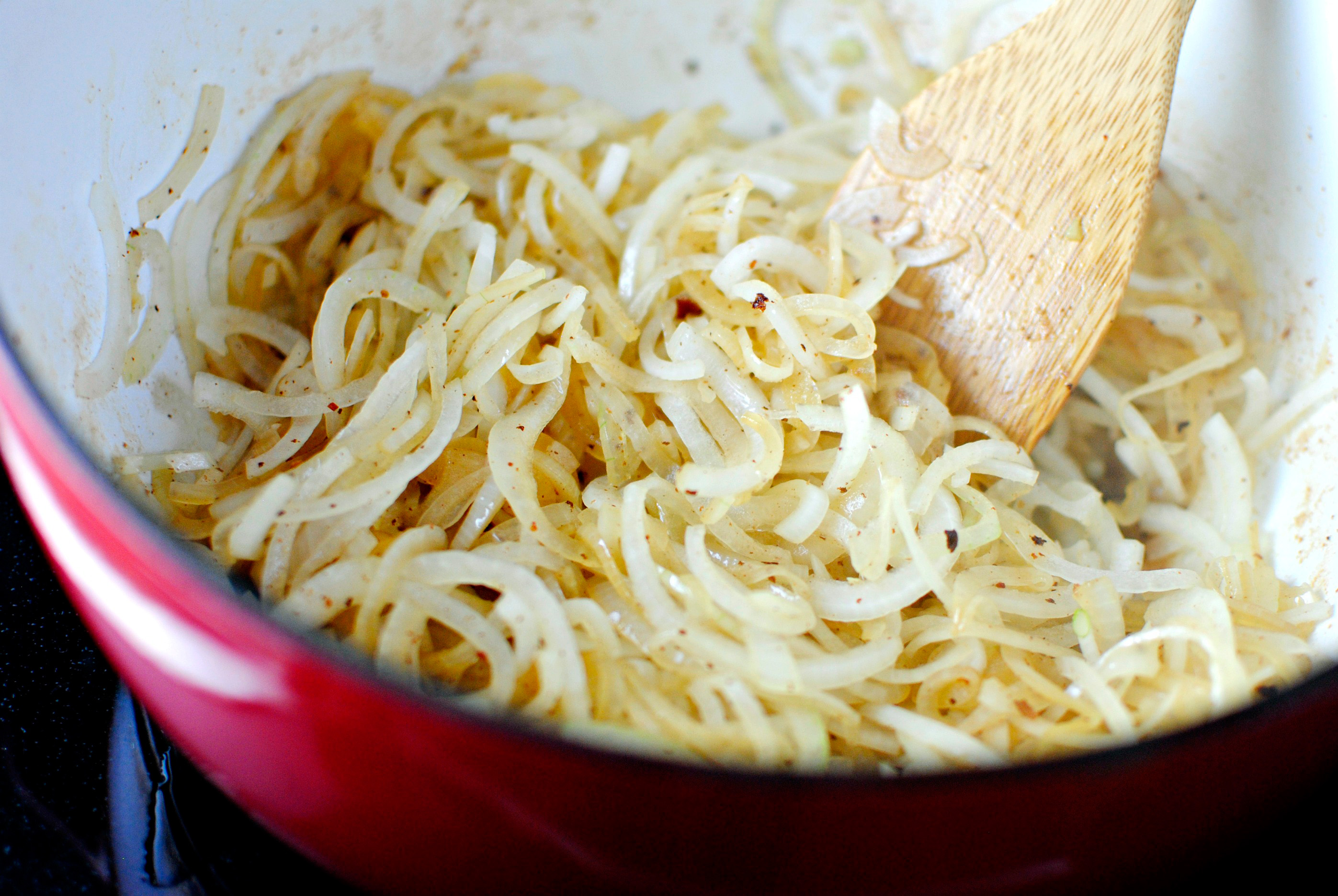 You’ll want to continue to cook the onions down until they are pretty translucent and soft. While that was going on, I made the glorious cooking liquids. 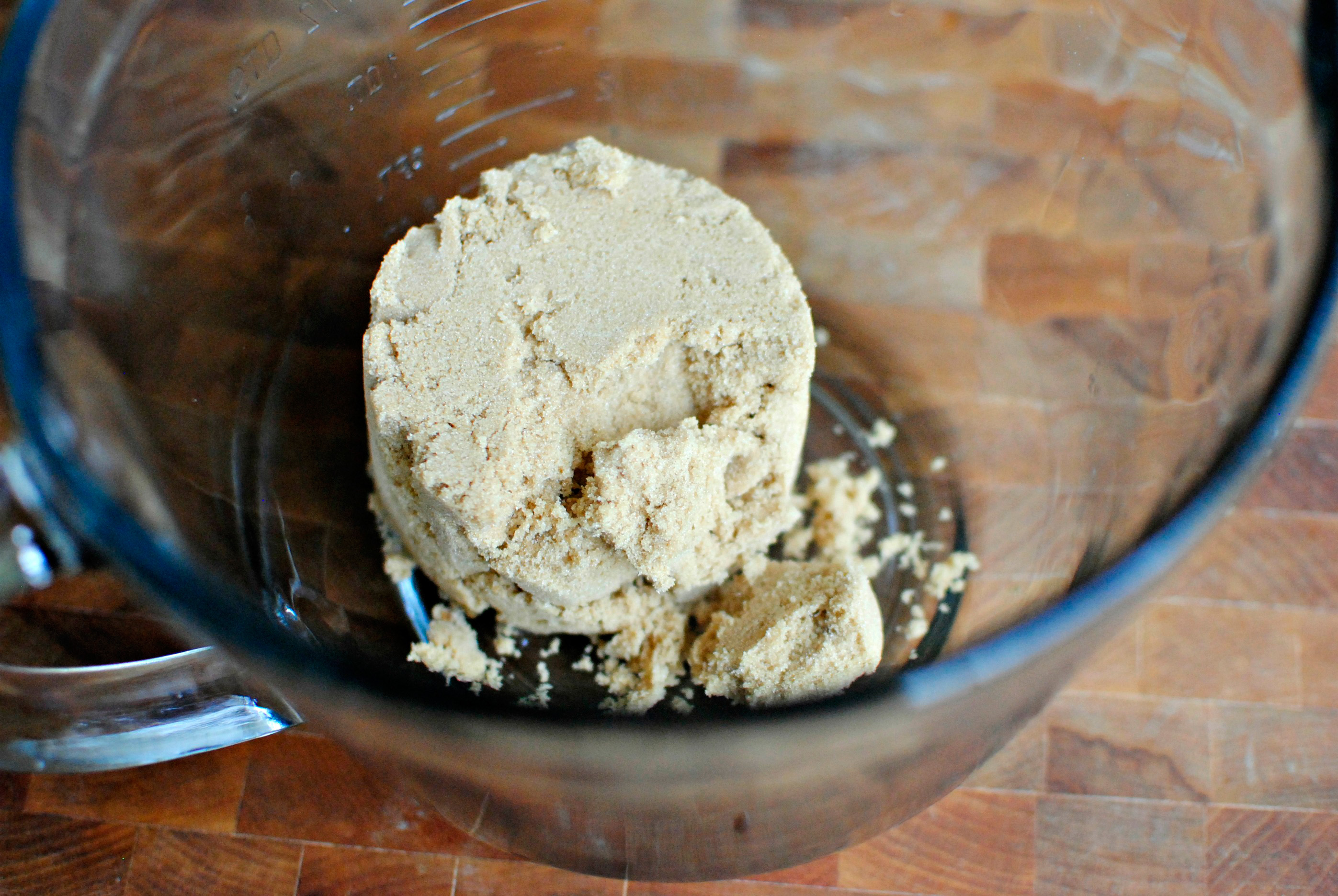 In a large bowl measure and add in the cup of brown sugar. 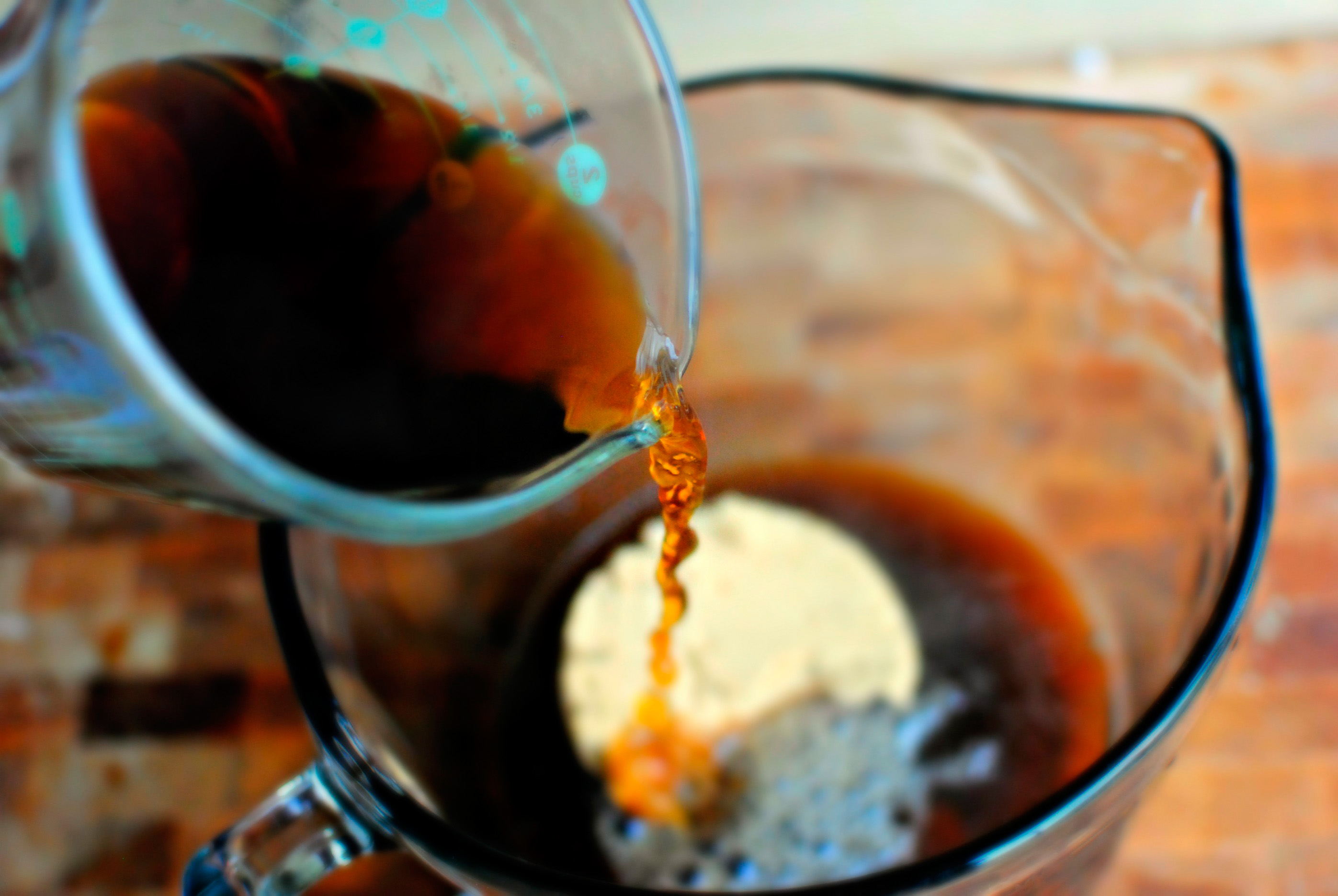 Pour in a cup and a half of strong coffee. 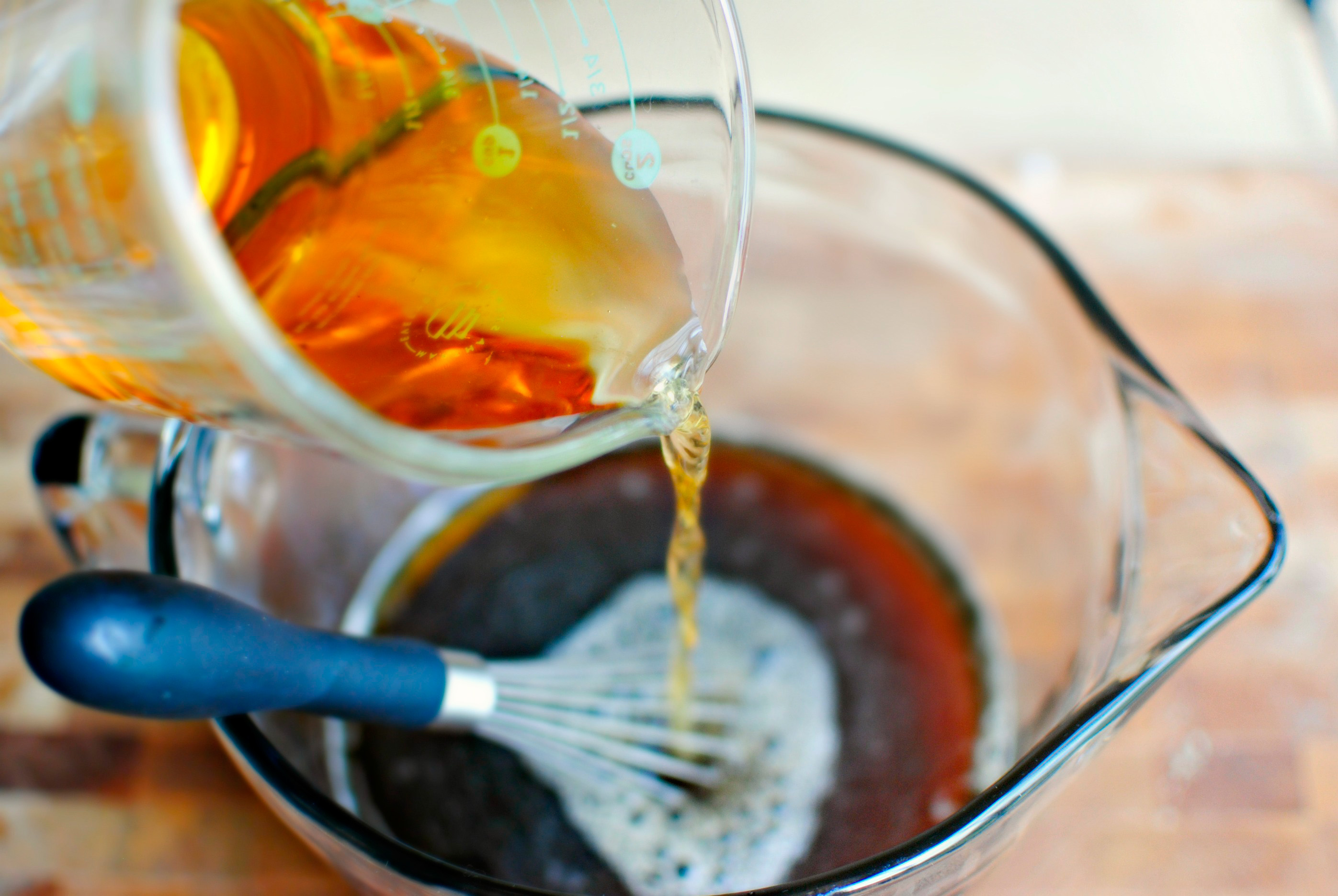 Then the cup of cider vinegar. 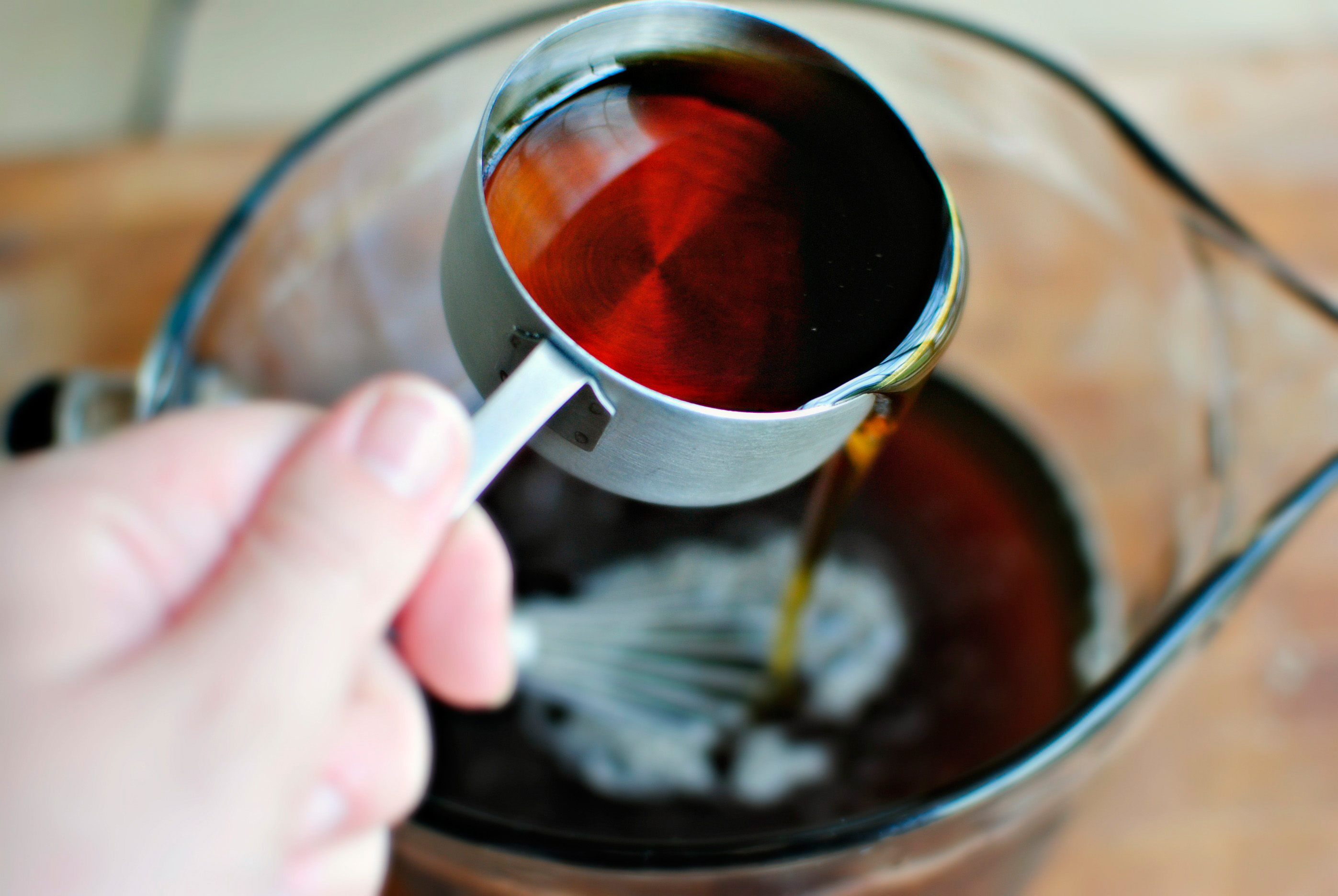 Measure and add in the 1/2 cup of pure maple syrup. This is the real-deal PURE maple syrup kind, so please none of that artificial stuff! 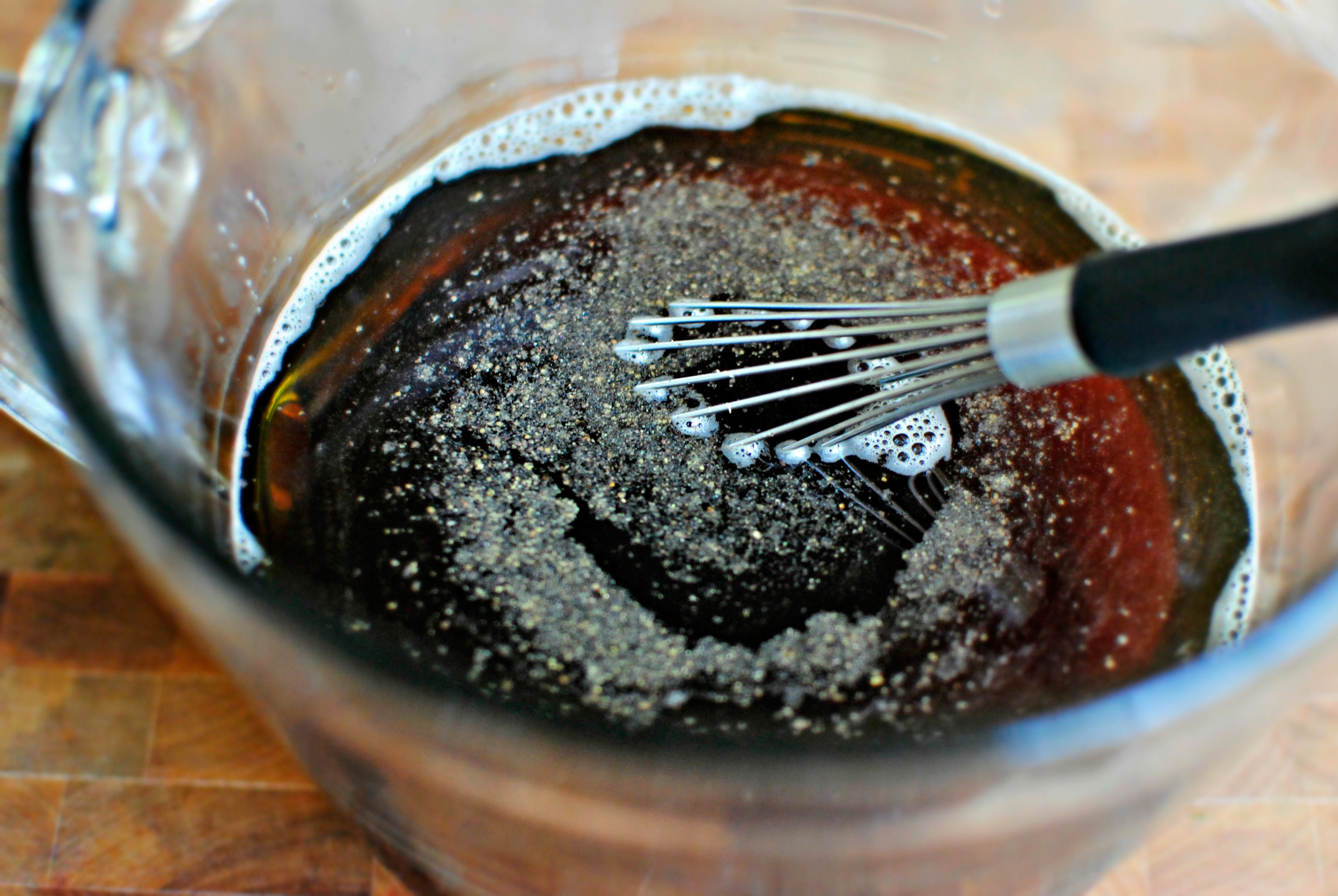 Season with a teaspoon of black pepper. And that’s it! 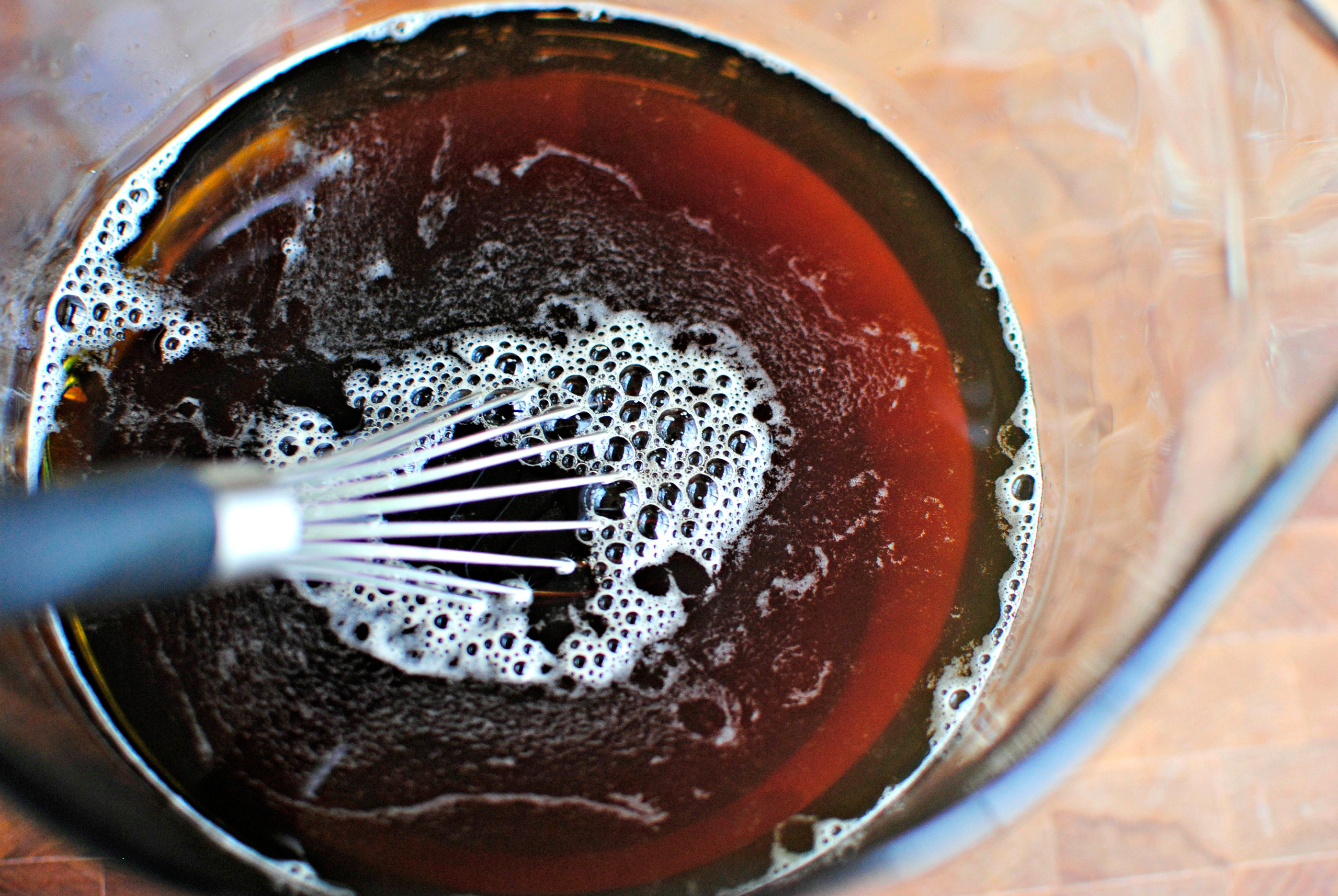 Give it a good stir to get the maple syrup and brown sugar mixed well together. 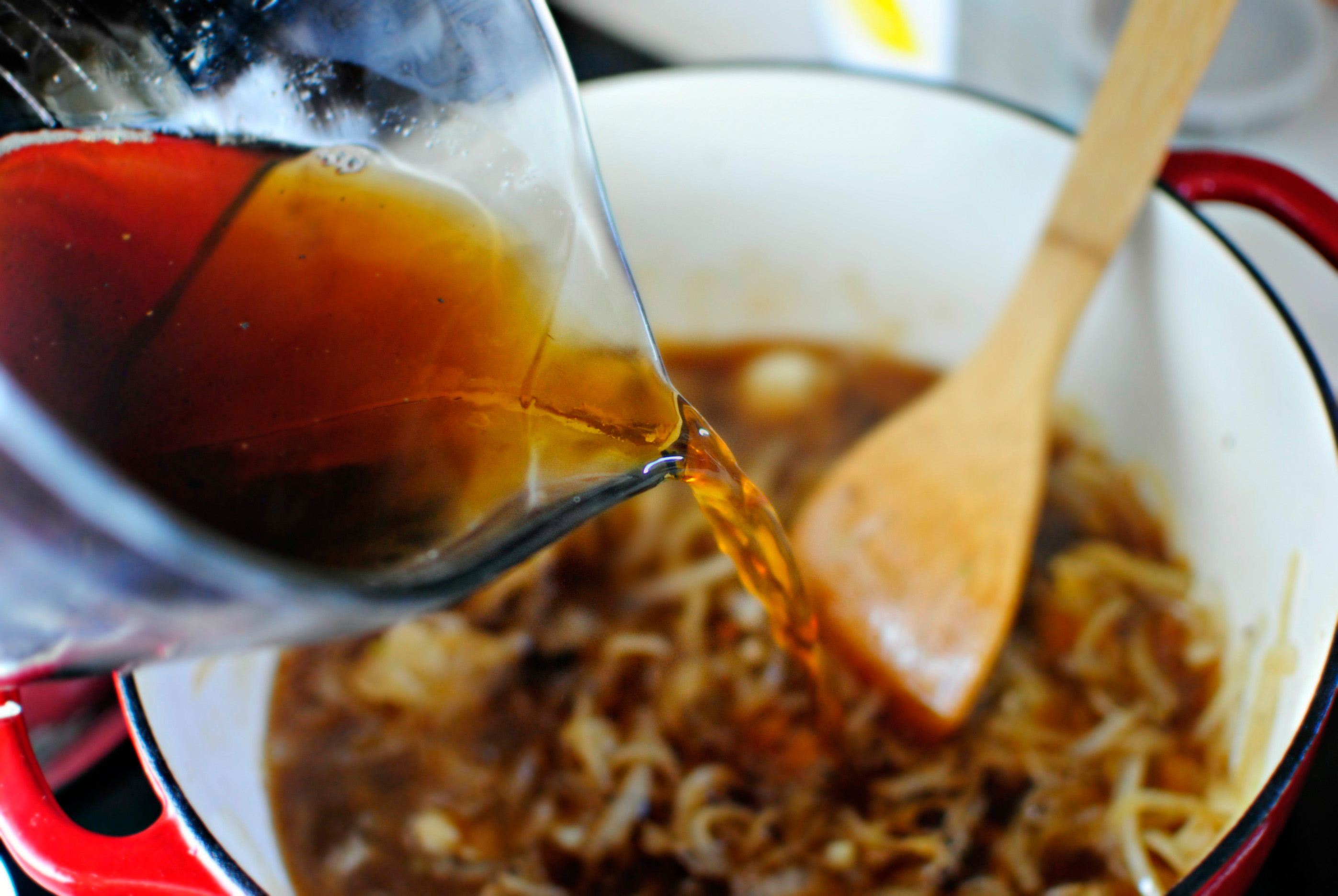 And then just pour it over the onions and garlic and give it a good stir as well. 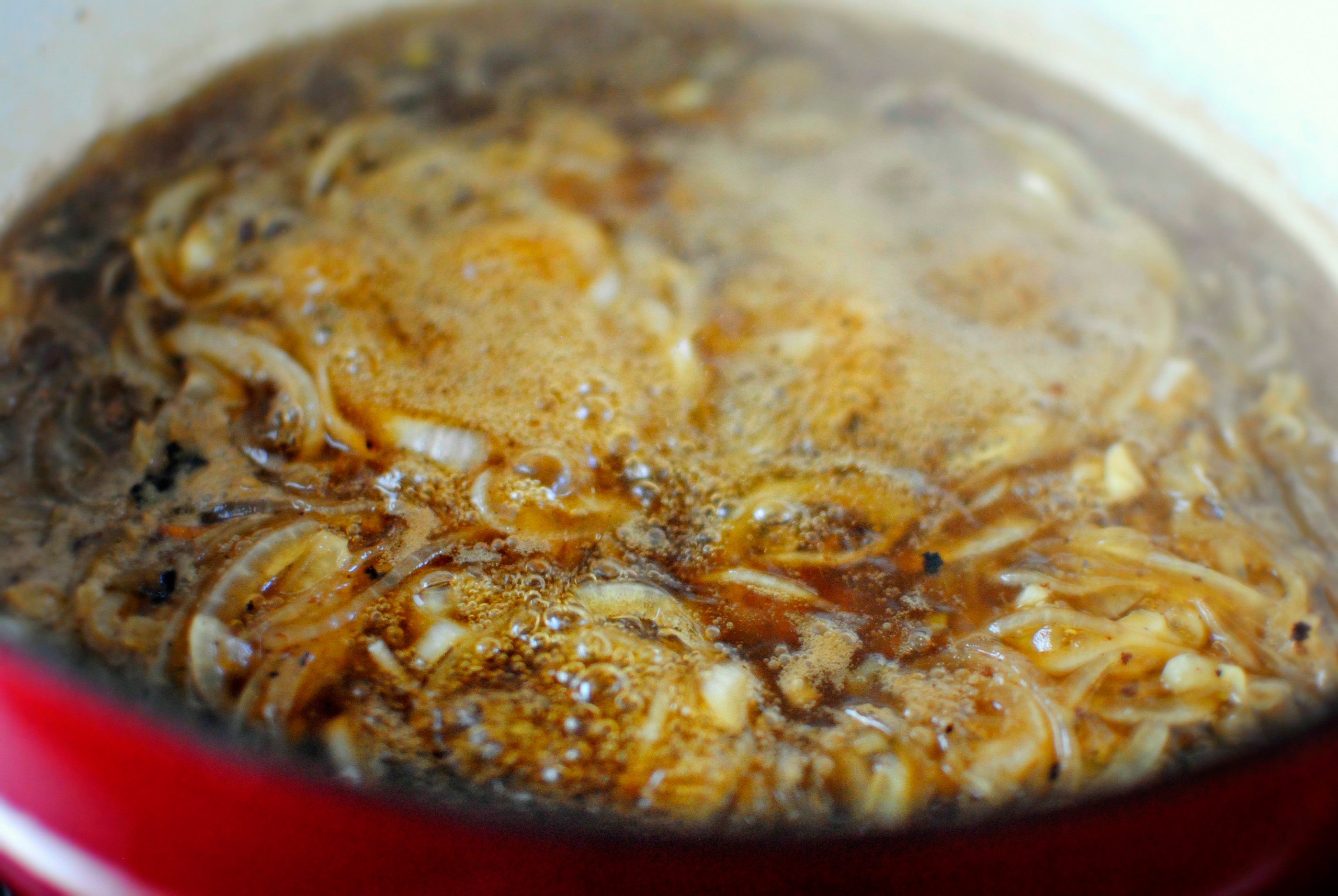 Then I just brought the mixture up to a hard boil for about two to four minutes before adding in the bacon. 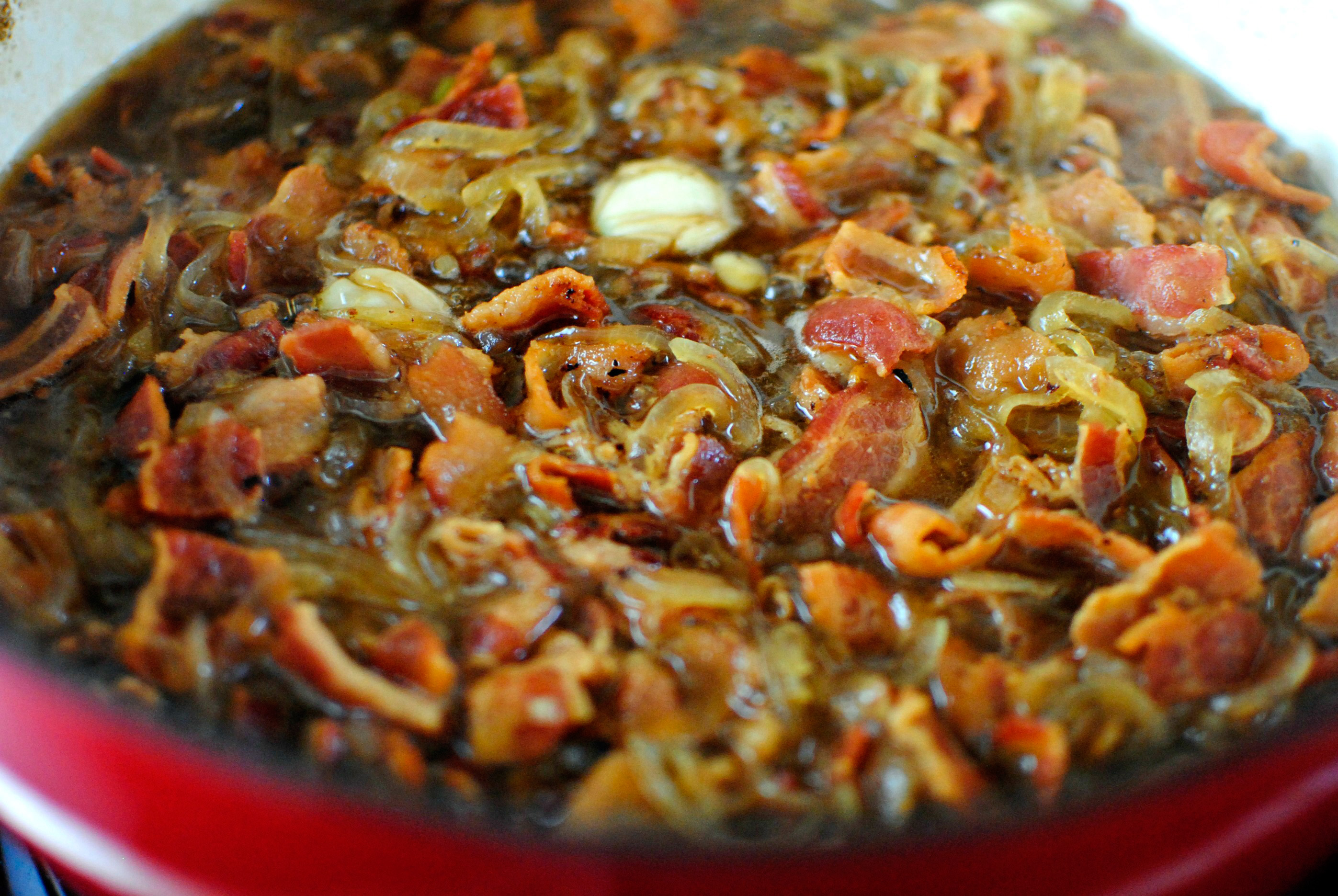 Then I reduced the heat down to low to simmer, with the lid off, until the sauce was thick and the onions started melting. It takes a good hour to an hour and a half for this all to happen. But my house filled with a smell I can only describe as a bacon-y barbecue smell which I hope heaven will smell like. 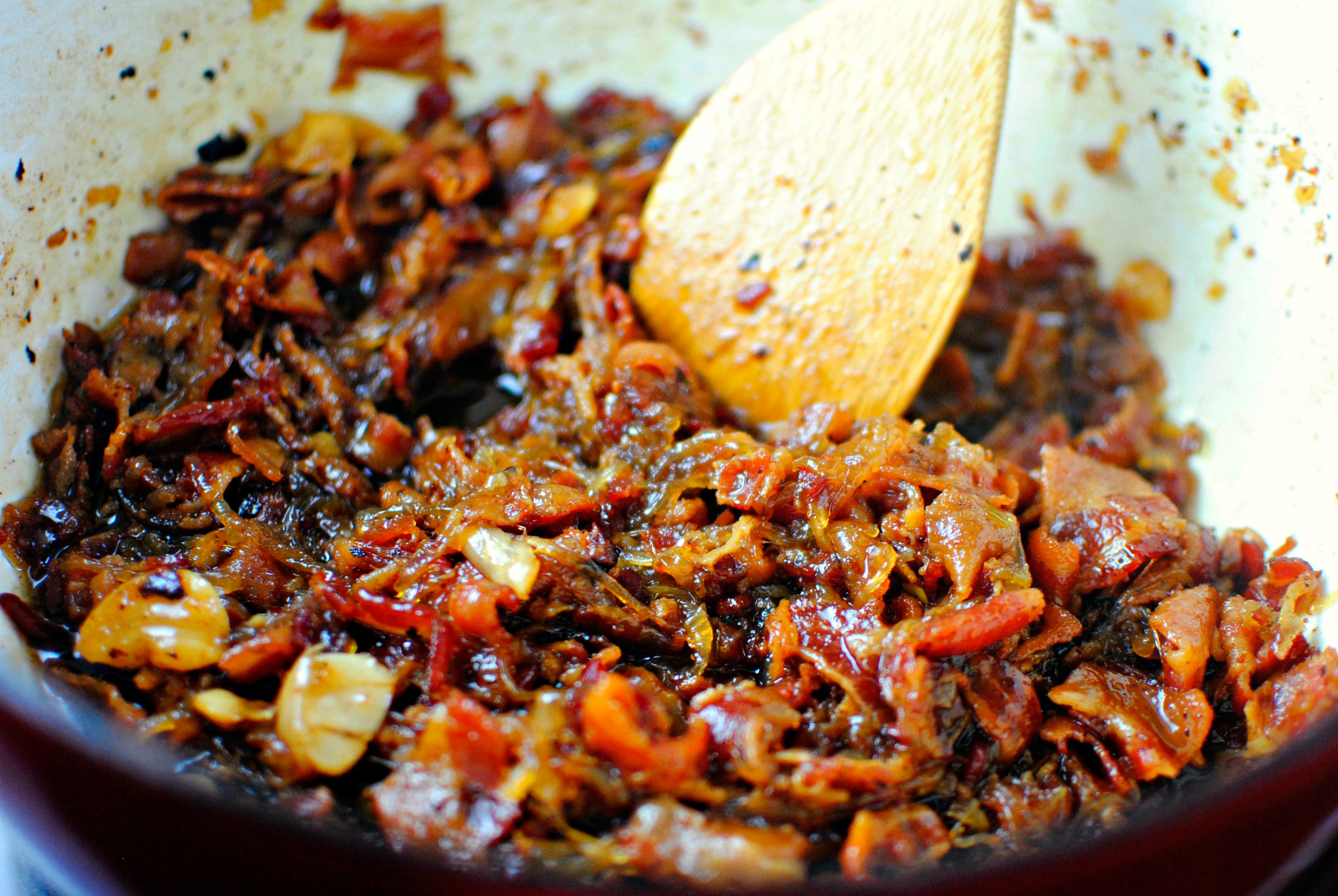 When all is said and done and the liquid has reduced, this is what it should look like. Fabulous! I could’ve stopped here and ate it all by spoonful. 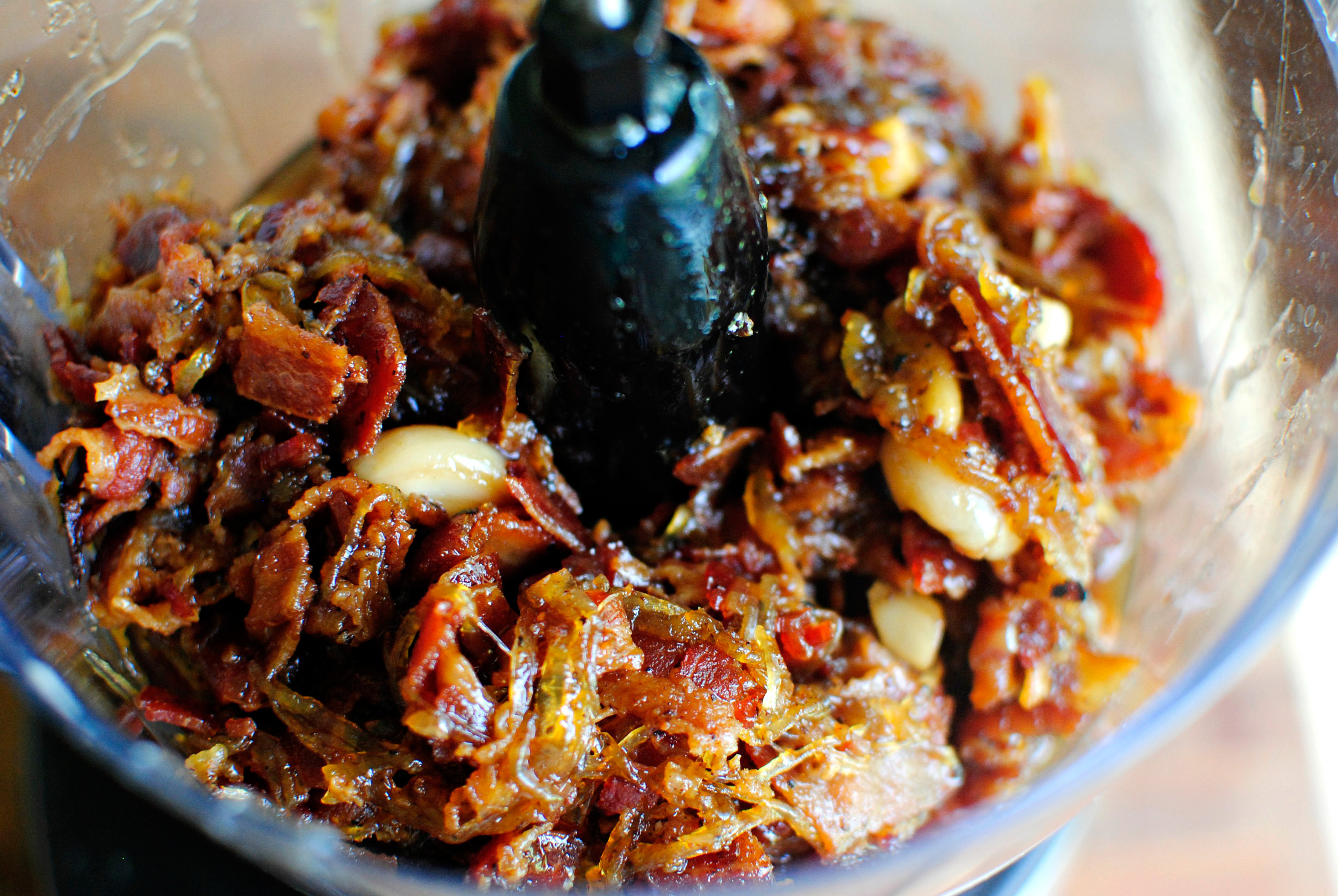 But instead I added it all into my food processor, placed the lid on tight, and pulsed it until it resembled jam. 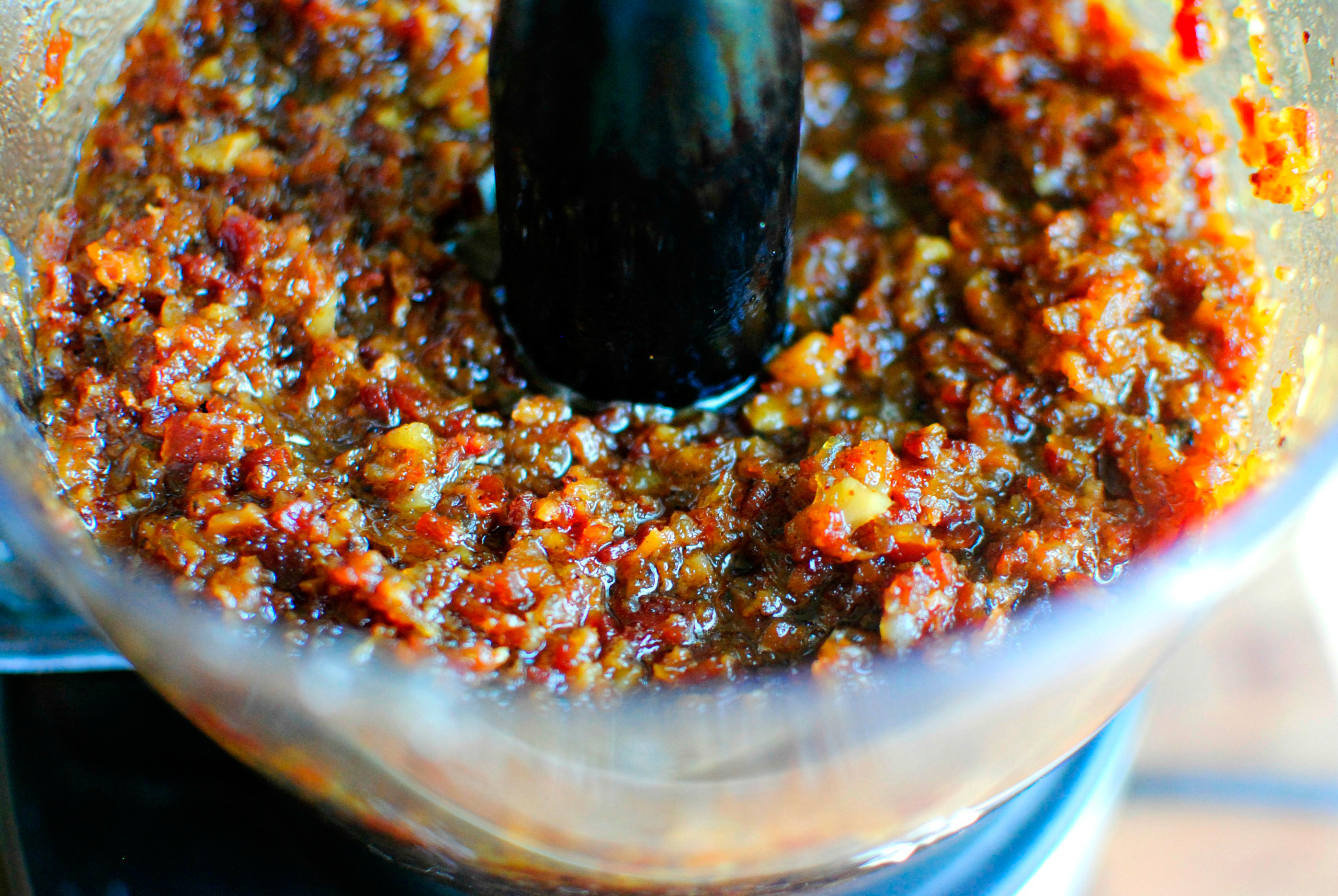 You could keep going for a smoother consistency but I like texture. So I stopped right here. 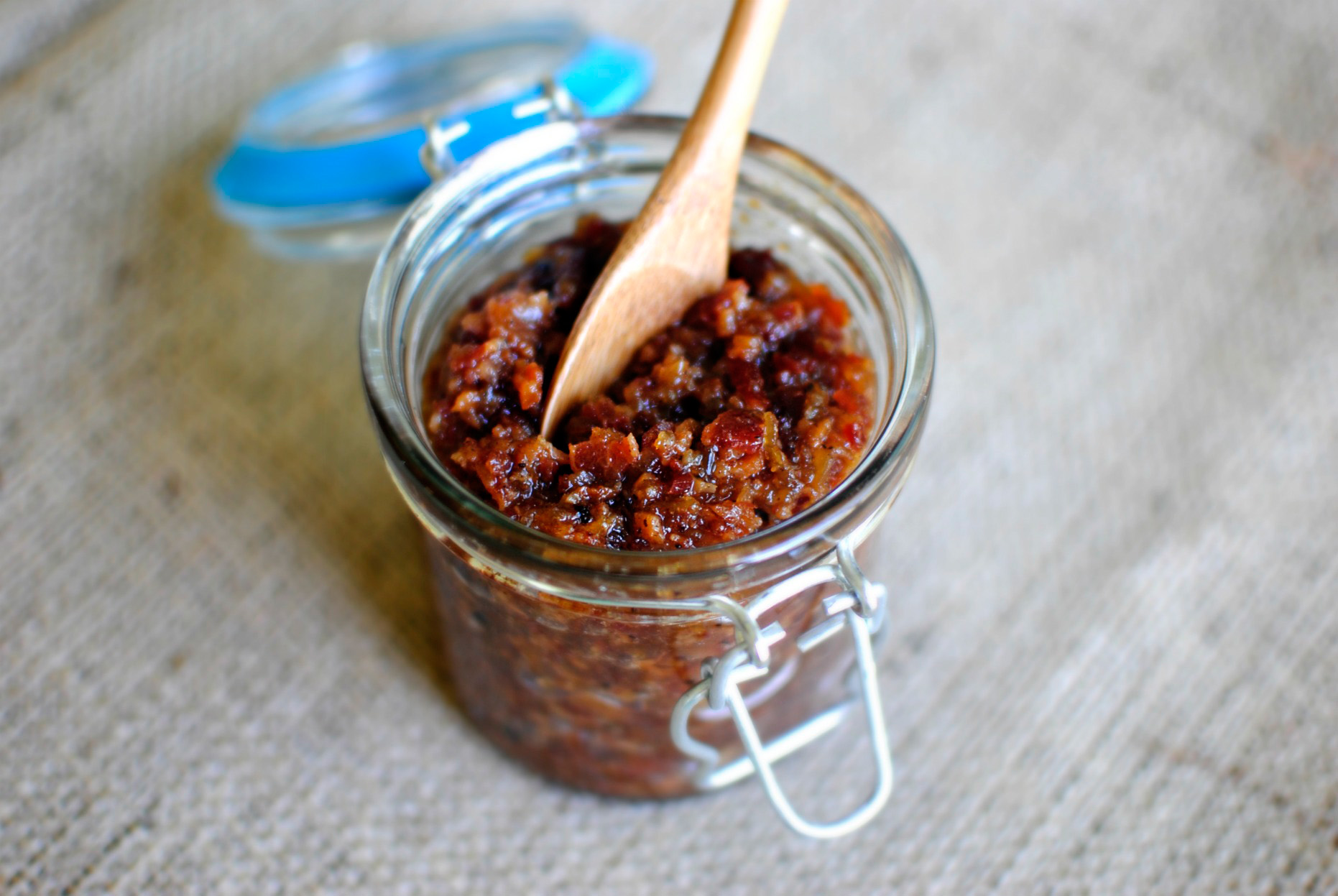 After it cooled, I stored it in jars in my fridge.

And sometimes I sneak and take a spoonful out at night. But that’s our secret, k? 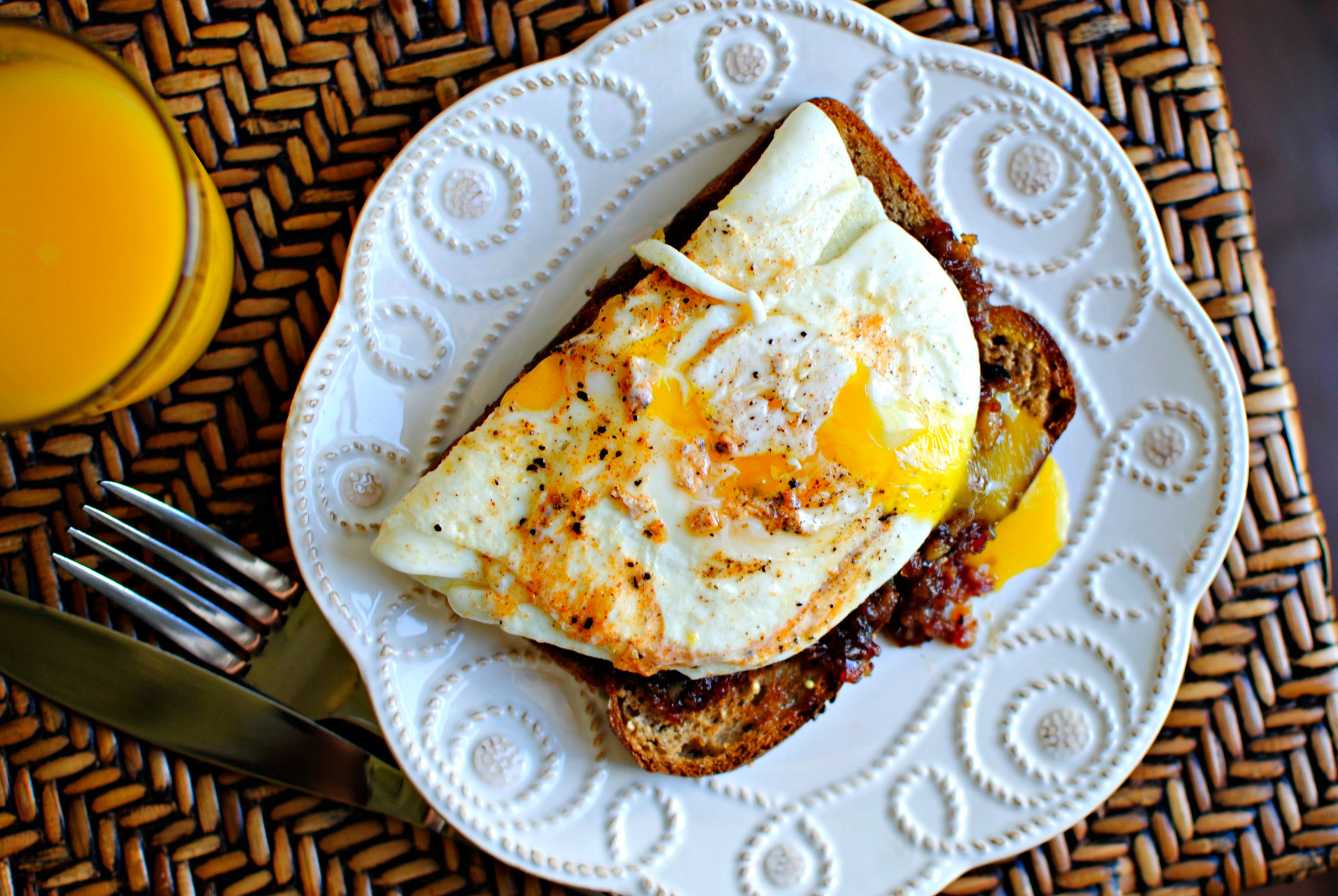 My favorite way to eat bacon jam (besides by the spoonful) is to heat a little up and spread it over whole grain toast with a fried egg (over medium) on top. Oh, it’s to die for! Really, my life is forever changed!

A big ‘Thank you’ to Rebecca for sharing this recipe with all of us here on Tasty Kitchen. With over a hundred recipes on TK alone, Rebecca has even more amazing stuff on her blog Foodie with Family. So be sure to stop by her TK recipe box and her website to check it all out! I promise you won’t be disappointed.

This jam also makes for an excellent gift, so go on and share the deliciousness!

Also check out these versions of bacon jam, like Beer & Bacon Jam by Jackie Dodd or, for a spicy version, try Dax Phillip’s Bacon Jam! You can also check out cookincanuck’s TK Blog post where she makes fellow contributor patiodaddio’s amazing Onion and Bacon Marmalade. All of these are on my list to try as well! 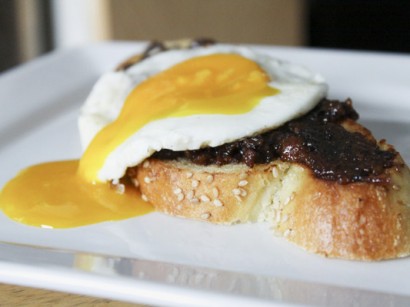 Salty, sweet, meaty, and pure umami (or “Ooh Mommy!”), this is going to make you rethink breakfast. Smoky with bacon flavor, tinged with coffee and maple syrup, this spread transforms toast or sandwiches with very little effort.

Place the Dutch oven back over the medium-high heat and add the onions and garlic. Stir well and reduce heat to medium. Continue to cook for about 8 minutes, or until the onions are mostly translucent. Add the remaining ingredients, stir well, and drop heat again, this time to low.

Bring to a boil, stirring frequently, and boil hard for 2 minutes. After 2 minutes, stir the browned bacon into the onions and liquid.

Simmer uncovered, stirring occasionally to make sure things aren’t sticking, adding 1/4 cup of water if it seems to be drying out. When the onions are meltingly soft and the liquid is thick and syrupy, remove the Dutch oven from the heat and let stand for 5 minutes.

Transfer the contents of the Dutch oven to the work bowl of a food processor that has been fitted with a blade. Fit the lid in place and pulse several times or until the bacon jam is a spreadable consistency. Scrape into a jar (or jars) or a container with a tight fitting lid. Store in the refrigerator for up to one month.

Can be served cold, room temperature or warmed.