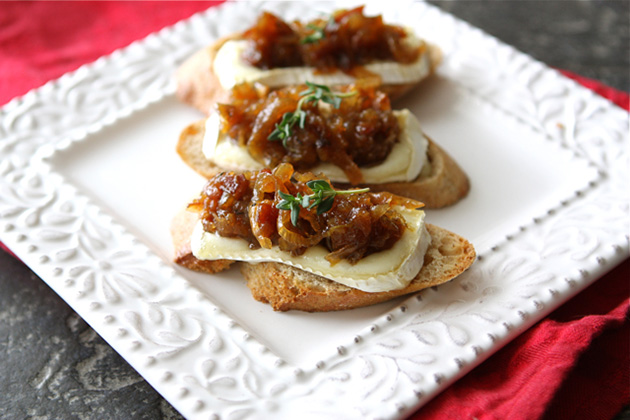 New Year’s Eve is always a time of celebration. For one, it is the “last hurrah” of the holiday season, one last chance to pull out the finery and raise our glasses to family and friends. Well, it’s also about the food. I would be lying if I said otherwise. New Year’s Eve celebrations are a time to pull out all of the hors d’oeuvres recipes in my recipe box and get to work preparing little tastes of multiple flavors. We are always looking for new recipes to shake things up a bit and, as soon as I saw this Onion and Bacon Marmalade by Tasty Kitchen member patiodaddio, I knew it would hit the mark. That would be an understatement.

If you watch the daily featured recipes regularly on Tasty Kitchen, you have likely seen John’s recipes flash across the screen. And you know what? Every single one of them looks good. Really good. This recipe mixes the saltiness of thick cut bacon and the brightness of fresh thyme with the sweetness of onions slowly caramelized in apple cider, sherry vinegar and brown sugar. The beauty of this recipe is that it can take on many forms. I served it on toasted baguette pieces with melted brie, while John suggests pairing it with goat cheese or mixing it into a bowl of grilled brussels sprouts. Really, you can’t go wrong any way you choose to serve this wonderful mixture. 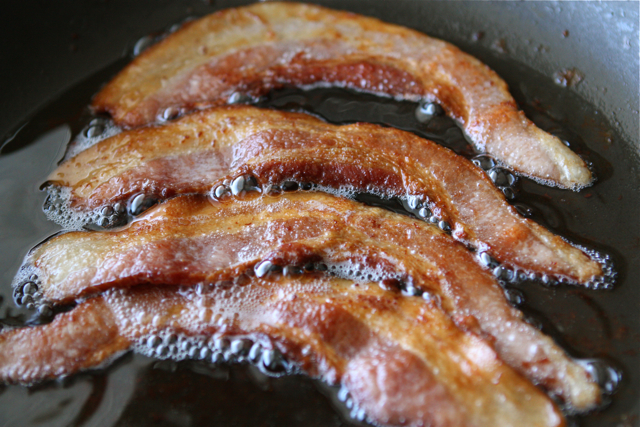 Place the bacon in a large saucepan set over medium-high heat. Cook until the bacon is just crisp. Remove from the pan, drain on a piece of paper towel and set aside. Do not discard the rendered fat in the pan. 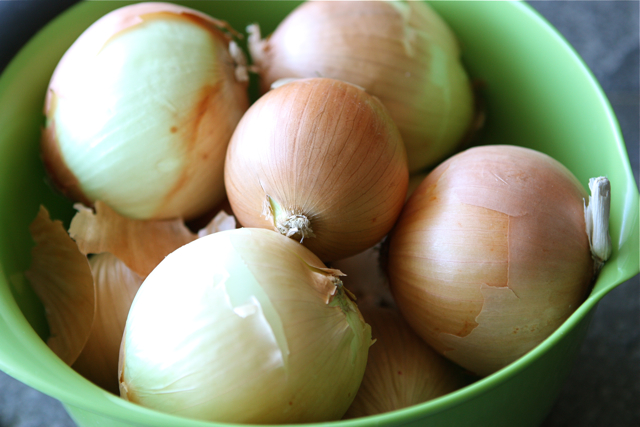 This recipe uses 4 pounds of onions. That may seem like a lot but they will cook down significantly. And, believe me, you are going to want as much of this marmalade as you can get your hands on. 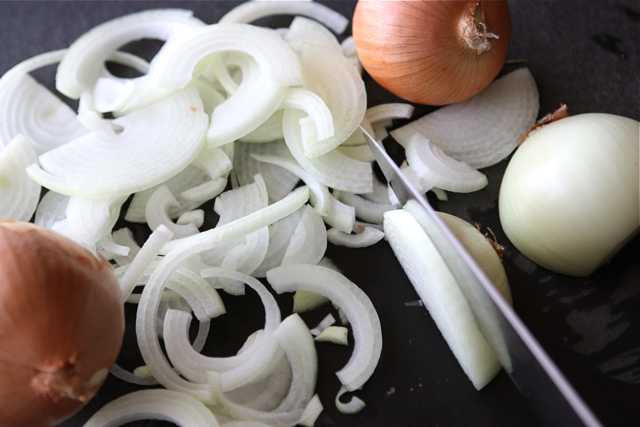 Cut the onions in half, peel them and cut into ¼-inch slices. Keep a tissue nearby for the inevitable running-of-the-mascara and burning eyes. Ahh, but it is worth every tear. 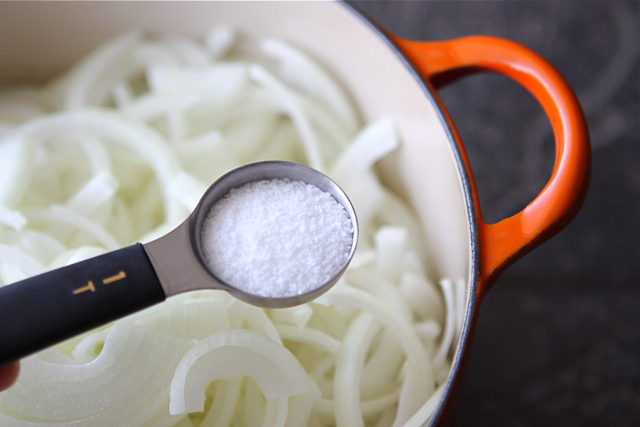 Add the onions and salt to the fat in the pan. Reduce the heat to medium, cover the pan, and cook until the onions are soft, about 15 minutes. 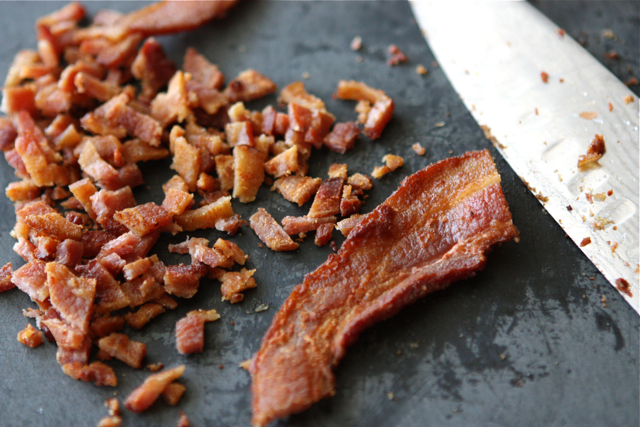 Chop the bacon finely and add it to the pan. 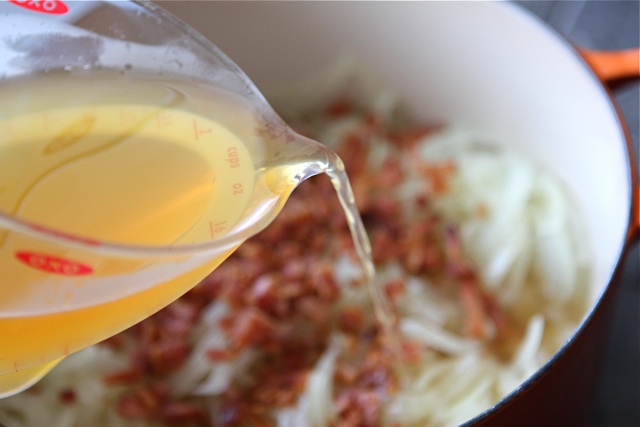 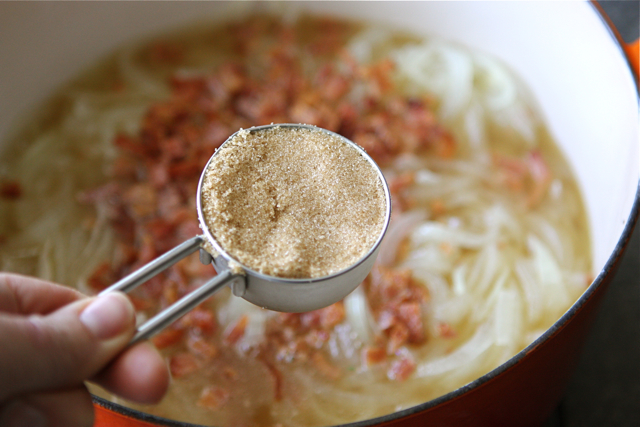 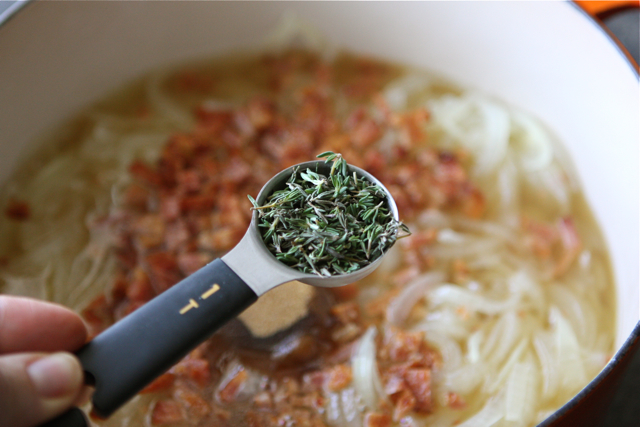 Stir well and cook, uncovered, until the liquid is almost completely reduced, stirring occasionally, about 1 hour. 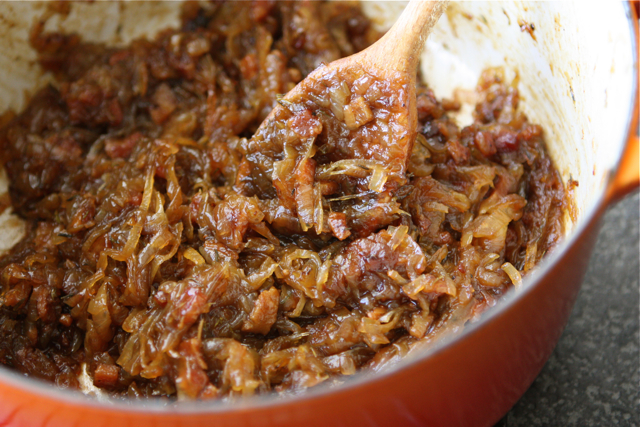 Reduce the heat to low and continue to cook, stirring frequently, until the onions are a deep brown color, about 10 minutes. If the mixture begins to looks dry, add water, ¼ cup at a time.

Remove the pan from the heat and allow the mixture to cool. Serve on crostini, in sandwiches, on pizzas or mixed in with roasted veggies. 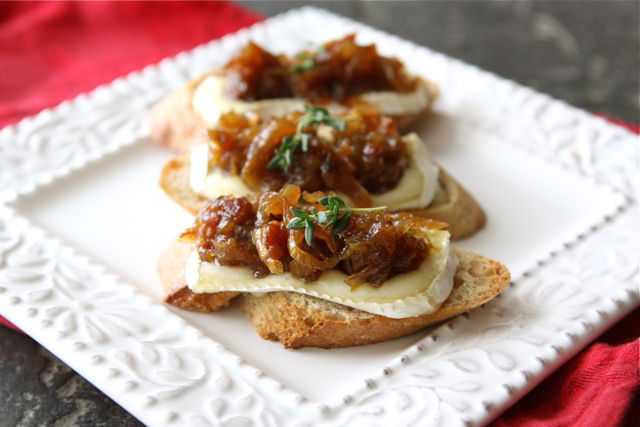 Thank you so much to patiodaddio for this amazing recipe. Besides serving the onion marmalade as crostini with brie cheese, we have also layered them into sandwiches and eaten them straight off a fork. Yes, they are that good. Be sure to check out his blog, Patio Daddio BBQ for more of his mouthwatering recipes. Want to read even more about him? Head over to his Tasty Kitchen Blog feature! 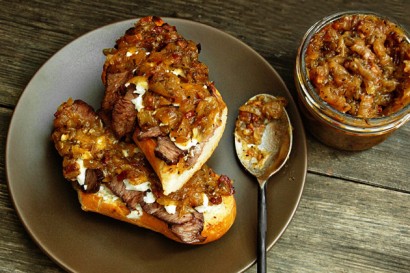 This marmalade is very versatile, and it’s also just this side of addictive. It’s amazing on a warm slice of baguette with some goat cheese, as you see pictured here, but with the addition of some thinly-sliced leftover steak. It’s also wonderful tossed into roasted potatoes.

This takes a while to make, but your patience will be richly rewarded.

Cook the bacon until it’s just crisp, then remove the slices and set aside, leaving all of the rendered fat in the pan.

Add the onions and salt to the pan, reduce the heat to medium, cover the pan, and cook until the onions soften (about 15 minutes).

Chop the bacon fine and add it and the remaining ingredients to the pan. Cook uncovered until the liquid is reduced to almost nothing, stirring occasionally (about an hour).

Reduce the heat to low and continue cooking until the onions are a rich medium brown color, stirring frequently (about 10 minutes). If it starts looking too dry, add water 1/4 cup at a time.

Remove from the heat, set aside, and let cool.

It looks great. Can’t wait to try it out

Dara, thank you for the clarification. I’m about to start peeling onions. Nice activity on New Years Day.

Just finished making this and can’t wait to try it with brie and bread tonight as a NYE appetizer!! It tastes soooo good straight out of the pan! Thanks for a great recipe!!

Jen – Sparkling cider will be fine. Git on it, grrrl!

Any idea how sparkling cider would do in this? It’s all I have on hand and I want. to. make. this. now.

Suzanna, you are going to love this recipe! Sorry about the vinegar omission in the photos. Just add it with the rest of the ingredients where stated in the actual recipe (i.e., when you add the bacon, apple, cider, etc.)

Onions are my world! I can’t wait to get to the grocery store to buy more so I can try this recipe.

I have one question. When do we add the vinegar? I can’t see it in the pictorial recipe?

Thank you for what appears to be the closest thing to heaven.

Made homemade pizza for supper last night. Was a white sauce version with lots of whole milk mozzarella and Romano cheeses. Used some of the onions on it. Words canNOT describe how good it was!!!! Thank you so much for this recipe!!!!!

Oh my goodness, I’m so excited. I’ve been looking for a recipe like this for years! Can;t wait to try it – on everything!

(Any home canners out there know if this is “can-able”?)

Helen, I don’t know the maximum amount of time you could keep it, but we were using ours up to a week after we made it. Heat it up in the microwave to loosen up the onions a little when it comes out of the fridge.

PatioDaddio, it was my pleasure. This recipe is a keeper and my husband has already asked me to make a second batch. Thanks so much for such a wonderful recipe!

how long does this keep for in the fridge?

Thank you so much for such a beautiful treatment of my recipe, and for your very kind comments. I’m very flattered and humbled.

I make this but use balsamic vinegar instead. It is to die for and you can use it on so many things. Try it on a burger or a pork chop. It is delicious in brussel sprouts too.

A Mandoline makes quick work of this many onions… and greatly reduces the mascara running!

This sounds yummy! I’m gonna save it and also forward it to a bacon-addict friend!

I make an onion version, but have never added bacon. Yum.

Just the name of this recipe started my mouth watering!!! Can’t wait to try this!

Made this for tonight’s supper to go with the grilled burgers…..yup, grilled out in S.E. MN! Was almost 50F and no snow on the ground!!! Will use the rest of the onions on homemade pizza tomorrow night. They are absolutely awesome!!!!

This looks wonderful! I am allergic to apples. Do you have a substitute for the cider?

Oh heck yes! Figuring out now when to make this!

If you keep your mouth closed – and do NOT open it – you will not “cry” when slicing onions.

you had me at bacon