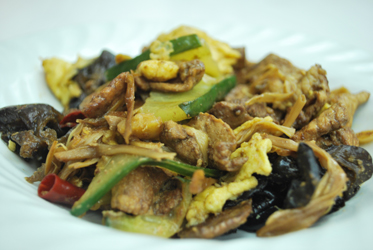 This dish is a basic stir fry that combines sliced pork in a simple marinade with fragrant pepper flower oil, savory wood ear mushrooms, dried lilies, and the cool crunch of fresh cucumber. Served with rice or a cold salad, this makes an excellent main course.

Phase One: Flower Pepper Oil and Rehydrating the Dried Ingredients

Flower pepper oil is a key ingredient in many Chinese dishes. By infusing the spicy aroma and flavor of flower peppers into a simple base oil, such as canola, peanut, or soybean, you can kick your stir fry dishes up a notch. Pour at least 2 cups of oil into a wok, or deep skillet, followed by 2 tablespoons of dried Sichuan flower peppers. Warm the oil over medium heat for 15 – 20 minutes, or until the pepper browns completely. This process will fill your kitchen with the sweetly spicy aroma of flower peppers. Yum yum yum. Remove the pan from heat and allow it to cool completely. Once it is ready, strain the oil through a cheesecloth or fine mesh strainer to remove the flower peppers. Keep the oil in a sealed bottle or container until it is used.

Wood ear mushrooms are also known as brown wood fungus, Judas ear fungus, and jelly ear fungus. In your Asian grocery they may be called 木耳 mù ěr or 黑木耳 hēi mù ěr in Chinese or キクラゲ kikurage in Japanese. It is one of about a zillion edible mushrooms so be cafreful when you try to pick it out.

Chinese day lily buds are yellow. They are called 金针菜 jīn​zhēn​cài​ in Chinese and are available at most Asian groceries. If you have trouble finding them, take a simple approach and just ask for “dried lilies.” Both the wood ear mushrooms and the lilies will need to be re-hydrated before they can be used. This will take at least 30 minutes, so it’s not a bad idea to get this over with the night before if you know you’ll be short on time the next day. Pop about 1 cup of each into bowls of cold, salted water and let them sit for 30 – 90 minutes. Any less and they’ll remain dried out. Any longer and they can begin to wilt. When they have had enough to drink, drain them and set them aside, covered and refrigerated if you’re cooking them the next day.

The first thing you’ll need to do is to slice and marinate the pork. Start with a lean pork medallion and a very sharp knife. Slice the pork as thinly as you can, and then chop the slices into bite-sized pieces. You can use between 8 ounces and 1 lb. for this recipe depending on the size of your crowd and your fondness for meat. When the pork has been all cut up, toss it into a bowl followed by 1 tablespoon of dark soy sauce, 1 tablespoon of malt vinegar, and 1 tablespoon flower pepper oil. This special soy sauce can be found at the Asian Grocery, but if you’d rather not add another odd bottle to your collection of household sauces, go ahead and use regular soy sauce. It won’t affect the flavor all that much. Add a little salt, an egg white, and a teaspoon of cornstarch. Mix the marinade and pork well to make sure it is totally coated, then set it aside.

Now comes the chopping. In this dish, garlic and ginger play a major role. You can go by your own taste on how much to add. For me, I don’t hold back. I chop up about 4 – 6 cloves of garlic, and about 1/2 thumbs worth of fresh ginger when I cook this dish. Peel the garlic and chop it into coarse, vertical pieces. Shave the ginger, then slice it into large chunks. These large cut chunks will add flavor, but are not meant to be bitten into during every bite of the meal. As an added bonus, for those who don’t enjoy chomping into straight garlic or ginger, these large slices are easy to avoid.

Next, you’ll need to prep your re-hydrated ingredients. Make sure your mushrooms are totally drained, then carefully pull each one apart with your fingers, creating bite-sized pieces from the giant individual mushrooms. To prep the lilies, pick them from the pile one at a time, and feel each end of the stalk. If you feel a very hard nub at either end, chop it off and discard it. You can leave the remainder of the lily whole, chop it in half, or even tie it in a knot if you want to get fancy.

The cucumbers are next. Get yourself a good-sized English cucumber, nice and long, but not too skinny. Chop that sucker into 3-inch sections, discarding the round nubs on either side. Next, tip each section onto its flat side and cut it into 1/8 inch slices, and set them aside for later.

At some point it would be a great idea to throw on a pot of rice. Long grain, basmati, whatever your pleasure, it’s best to have it steamed up, hot and ready when the dish is completed. So get on it before you get cooking. If you want to make your rice extra nutritious and delicious, not to mention extra interesting, toss in the following ingredients once the rice is finished cooking: 1 tablespoon Goji berries, 1 tablespoon raisins, and 1 tablespoon black sesame seeds.

(What’s a Goji berry, you ask? Sheesh. If you must know, Goji berries are small, red berries found throughout China, the Himalayas, and Tibet. They grown on teeny little evergreen shrubs, and contain a boatload of goodies, such as antioxidants, beta-carotene, and the lesser known but very good for you cartenoid, zeaxanthin. They are dried, and kind of look like pointy red raisins. By the way, they are delicious in ramen.)

So you are finally ready to rock the wok. Get the largest, most wok-like pan at your disposal and fill it with at least 1/2 cup of flower pepper oil. Heat that bad boy up over medium to high heat while you whisk together 2 – 3 eggs (depends on the size of your eggs, your appetite, and the amount of meat you’re using). When the oil is hot, whisk the eggs like crazy to bubble them up, then drop them on in and watch the magic. As a Westerner, the idea of deep frying scrambled eggs probably sounds completely crazy, but you’ll soon see the merit in this method. Soon after your eggs hit the oil, they will bloom into puffy delicious clouds. Use a slotted spoon, or better yet, one of those round spatulas full of holes to nab the eggs out of the oil. Once you’ve got them, drain them on a plate with a little paper towel and set them aside.

Now it’s time for the meat. Are you ready? Take a look at your wok first to assess the state of your oil. It must be piping hot and plentiful. Cooking the eggs may have reduced your supply, so go ahead and add some more if you think that your wok has less than 1/2 cup left. Don’t be shy with the oil, you are cooking Chinese! Trust me, no matter how much you add, they are adding more in China. You really can’t overdo it. Just make sure it is HOT. Depending on your stove, you may need to set it on high.

Once you are ready, drop your marinated pork into the wok. Right after adding the pork, take advantage of the slightly cooled oil by adding your chopped garlic, ginger, and hot peppers. Continue tossing the pork until it has cooked. Now, add 2 tablespoons of Chinese cooking wine followed by the mushrooms and lilies. Cook these for a couple of minutes, stirring and tossing all the time. Next, add the scrambled egg. As you continue to stir, try to deliberately break up the egg. Finally, add the chopped cucumber and continue to stir-fry just until the last ingredient has become hot. Remove the mixture from the heat and serve it immediately along with your delicious, Goji-berry-enhanced rice. 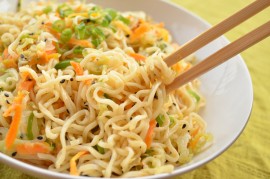 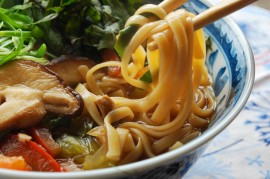 Our members have the best ideas for food gifts. Like this one!
END_OF_DOCUMENT_TOKEN_TO_BE_REPLACED

Put that slow cooker to work and rest easy knowing you have a warm meal waiting for you at the end of the day!
END_OF_DOCUMENT_TOKEN_TO_BE_REPLACED