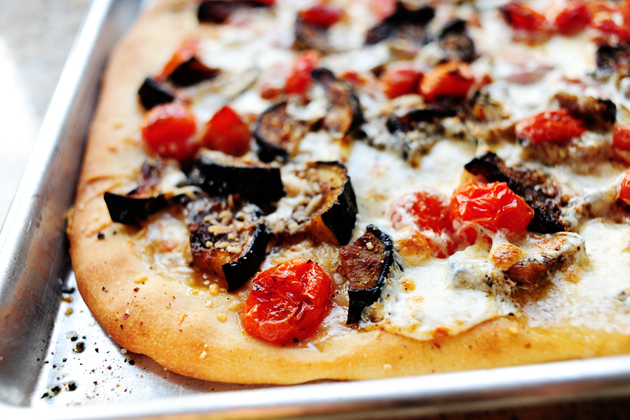 Let’s face it: I have a long list of favorite pizzas. This one’s delicious, thin, and loaded with eggplant and grape tomatoes. Chick food to the max!

TO MAKE THE CRUST:

Sprinkle yeast over 1 1/2 cups warm (not lukewarm) water.
In a mixer, combine flour and salt. With the mixer running on low speed (with paddle attachment), drizzle in olive oil until combined with flour. Next, pour in yeast/water mixture and mix until just combined.

Coat a separate mixing bowl with a light drizzle of olive oil, and form the dough into a ball. Toss to coat dough in olive oil, then cover the bowl tightly with plastic wrap and store in the fridge until you need it. ***It’s best to make the dough at least 24 hours in advance, and 3 or 4 days is even better.

TO MAKE THE PIZZA:

Slice the eggplant thinly. Sprinkle both sides with kosher salt and place into a strainer in the sink. Allow to sit for 20 to 30 minutes. Rinse eggplant lightly in cold water, then pat the slices dry between layers of paper towels.

Slice grape tomatoes in half lengthwise and toss into a bowl with minced garlic.

Cut eggplant slices into fourths, and toss with olive oil. Arrange on a baking sheet and place 8 inches under the broiler.
Broil for 3 minutes, then toss around and broil another 3 minutes. Remove pan from oven and add tomato/garlic mixture. Broil for 2 to 3 minutes, then remove and set aside. (May do this 1 hour in advance.)

Drizzle olive oil on a large baking sheet and use fingers to coat thoroughly. Remove HALF the pizza dough from the bowl. Stretch pizza dough into a large rectangle, pressing with fingers to finish forming. Dough will be very thin.

Bake for 10 to 12 minutes, or until crust is golden brown and the cheese is bubbly. Remove from pan and slice with a pizza cutter. Serve immediately!

This is now my go-to crust! I made the pizza, but left out the tomatoes and it was delicious.

WOW! This really is the best crust! I will use it for everything. I just made it as specified in this recipe (maybe my favorite too). The other night, I made the BBQ chicken pizza with a different crust. Never again! This will be my go to pizza crust! Thanks Ree!!

I made the dough last night and had the kids make individual pizzas, while I made a hawaiian and sauteed veggie pizza – the crust was fabulous! Thanks for sharing!

Wonderful recipe, I have used roasted cherry tomatoes and eggplant as a pasta sauce for years, but tonight I am making this pizza!

i can totally see why this would be your fav pizza. so delicious, and that step with the eggplant really makes all the difference. i’ve even just use the eggplant tomato and garlic for some quick simple pasta!

I love this recipe. Definatly a great summer pizza! I’m getting hungry now just thinking about it. I roasted the tomatoes a bit longer til they got a little caramelized and they were so sweet on the pizza. I also added the minced garlic directly to the pizza crust with a little olive oil instead of roasting it with the tomatoes cause it burns pretty quickly.

AMAZING!! This is seriously the best thing I have ever made. I literally closed my eyes after the first bite so I could savor the amazingness of this pizza!

I had been in search of a basic pizza dough recipe. This one is one I build on as my “base” (I have tweaked it and how I use it).

It is so easy to make and does get better with age. I have never used it after 24 hours. You should plan ahead as it takes 4 days for the best flavor.

It may be tough to agree on which movie to watch, but an incredible snack is something everyone will love!
END_OF_DOCUMENT_TOKEN_TO_BE_REPLACED

Here's a quick and easy dish for those busy nights. Be a hero in 30 minutes or less!
END_OF_DOCUMENT_TOKEN_TO_BE_REPLACED