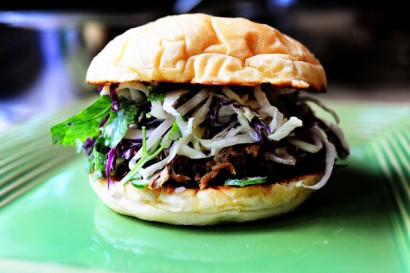 Spicy pulled pork sandwiches made extra divine with a generous topping of cilantro slaw. The combination of cool and hot is to die for. (I’m using my Dr Pepper shredded pork, which I’ve posted previously, but any shredded pork or brisket recipe will do!)

Generously salt and pepper the pork roast, then set it on top of the onions in the pan.

Pour the can of chipotle peppers over the pork (include the sauce.) Pour in both cans of Dr Pepper. Add brown sugar to the juice and stir in.

Place lid tightly on pot, then set pot in the oven. Cook for at least six hours, turning roast two or three times during the cooking process. Check meat after six hours; it should be absolutely falling apart (use two forks to test.) If it’s not falling apart, return to the oven for another hour.

Remove meat from pot and place on a cutting board or other work surface. Use two forks to shred meat, discarding large pieces of fat. Strain as much of the fat off the top of the cooking liquid as you can and discard it. Return the shredded meat to the cooking liquid, and keep warm until ready to serve. (You can also refrigerate the meat and liquid separately, then remove hardened fat once it’s cold. Then heat up the liquid on the stovetop and return the meat to the liquid to warm up.)

Before serving, toss in cilantro leaves.

Butter both halves of Kaiser rolls, then brown them on a griddle or skillet until golden and crisp on the surface. Load up each sandwich with shredded pork, then REALLY load them up with the slaw.

We made these and loved them. The slaw is awesome.

Wow, the spices and vinegar in this dish sound like they taste great together. I love sandwiches with slaw in them. And as always your picture of the food looks amazing!

Not my favorite coleslaw recipe, but pretty good otherwise.

This is great and my family loved it. I made the recipe as written with one change…I used bagged coleslaw mix instead of cutting up my own cabbage. Summertime laziness I guess. I’ll definitely be making this one again. Thanks for the great recipe!

Drop dead fabulous. I did it in the crock pot as well, and I used ~3/4 of a 7 oz can of chipotle peppers as my husband doesn’t like spicy food, and it was still flavorful and tangy with a warm heat.

We thought this was wonderful! My hubby and in laws kept raving on and on about it! So good! I did it in a crock pot because I did not have a dutch oven and it worked well.

Our members have the best ideas for food gifts. Like this one!
END_OF_DOCUMENT_TOKEN_TO_BE_REPLACED

Put that slow cooker to work and rest easy knowing you have a warm meal waiting for you at the end of the day!
END_OF_DOCUMENT_TOKEN_TO_BE_REPLACED