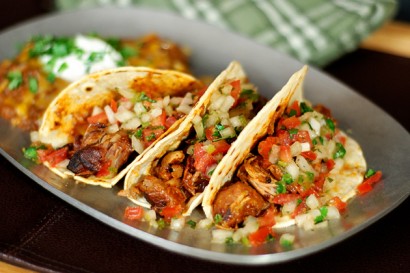 Chunks of pork braised long and slow in a rich liquid of chicken stock and enchilada sauce. I wanted to skirt the line between ease of preparation and authenticity.

Cut the pork into 2-inch cubes, removing any heavy fat.

In a large mixing bowl, combine the marinade mixes, oil, vinegar, and paprika, and whisk to combine. Add the pork, toss to coat well, cover with plastic wrap and set aside for 30 minutes.

In a large heavy pot (preferably an enameled cast iron Dutch oven), combine the chicken stock, one can of the enchilada sauce, onion, garlic, and cilantro if you want it (I left it out because we’re cilantro-senstive). Bring the liquid to a simmer over medium-high heat.

Gently add the pork and the marinade to the simmering liquid, cover, and bring back to a light simmer.

Reduce the heat to medium-low and let simmer until the pork is fork-tender, about three hours.

Heat your oven to broil.

Using a Chinese wire strainer or slotted spoon, remove the pork and onions to a large roasting pan. Spread the meat evenly throughout the pan, breaking the pieces of meat in half into smaller one-inch chunks.

Drizzle the pork with the remaining can of enchilada sauce and put it in your oven so that the the pork is about six inches from the broiler.

Note: I used a disposable foil pan so for ease of cleanup for the family I was serving.

Paying close attention, cook the pork under the broiler until the outside just starts to brown and crisp, about five minutes. 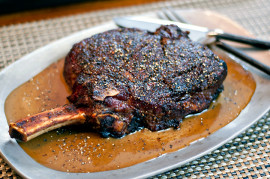 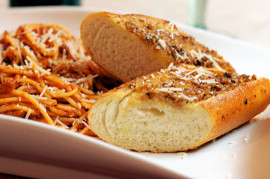 Find patiodaddio elsewhere on the web.

my daughter has been wanting me to make pork carnitas. this looks like a good recipe to try. thanks for posting.

I’m not sure how they taste, but they look and sound wondeful, I think I’ll share this recipe, and thank you for sharing!!!

Takes a while to make, but easy and delicious. Your recipes are always great.

This was delicious. I will definitely be making this again.

Our members have the best ideas for food gifts. Like this one!
END_OF_DOCUMENT_TOKEN_TO_BE_REPLACED

Put that slow cooker to work and rest easy knowing you have a warm meal waiting for you at the end of the day!
END_OF_DOCUMENT_TOKEN_TO_BE_REPLACED