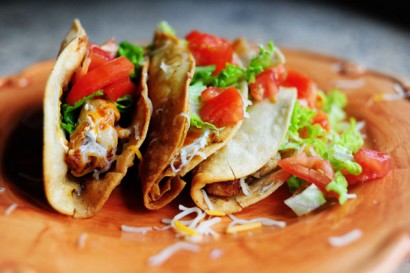 A little messy, but a fun, crunchy way to get your taco fix!

*Be careful frying with hot oil!*

Season diced chicken liberally. Heat 2 tablespoons oil in large skillet over medium-high heat. Add the chicken and cook for a couple of minutes. Dump in the diced green chilies. Stir and cook until chicken is totally done inside. Turn off heat and set aside.

Also have a plate ready, as well as a stack of five or six paper towels to hold in your hand.

To fry the tacos, heat a couple of inches of canola oil in a heavy skillet over medium-high. Place some chicken in the middle of a tortilla, then fold tortilla in half. Clamp the tortilla shut with a pair of heat-proof metal tongs, then carefully lay the taco—one side down—in the oil. As you lay it in the oil, use the tongs to hold the top side down for a few seconds to form it in place. Once it stays put, repeat with two other tacos. Turn tacos after 30 to 45 seconds, or when each side gets light golden brown (not too brown.)

One at a time, remove tacos from the pan with tongs, holding sideways as you remove them to allow oil to drip out of the sides. Place the taco in the stack of paper towels. Fold the sides and corners around the taco to tightly hold it, then give it three or four shakes to remove excess oil. Remove it from the paper towels and place on a plate. Repeat with other tacos in the pan.

As you continue frying the other tacos, have someone carefully place some grated cheese inside the tops of the tacos (gently pry them open just enough to place the cheese in). Then just let them sit until ready to serve—the cheese will melt as it sits in the warm taco.

To serve, garnish in this order: a smear of sour cream, dashes of hot sauce, shredded lettuce, diced tomato. You’ll need to slightly open up the tops of the tacos to get all the garnishes in there.

Tacos will be hot for a minute or two after frying, so don’t rush into eating! They’ll stay nice and warm for a little while after frying.

These tacos were delicious! I don’t think I had the oil hot enough though, as they did come out a little greasy. I should have known something was up when the shells took longer than expected to crisp and brown. The flavor and method was fantastic! I’ll try this one again soon!

These were so good. A little messy, and it helps to have an extra set of hands when it comes time for the frying, but worth every calorie.

These were the best tacos ever!!

Really good, and totally worth the extra effort of frying. Definitely use the hot sauce, it made them!!

these are amazingly addicting. i have made them 4 different times in one week before. so so so good!

I couldn’t get the tortillas to close without ripping…so I just used my typical method of folding tacos after they’ve been in the oil. I need to get better tortillas. This was very tasty, and my kids and husband loved these tacos!

Our members have the best ideas for food gifts. Like this one!
END_OF_DOCUMENT_TOKEN_TO_BE_REPLACED

Put that slow cooker to work and rest easy knowing you have a warm meal waiting for you at the end of the day!
END_OF_DOCUMENT_TOKEN_TO_BE_REPLACED