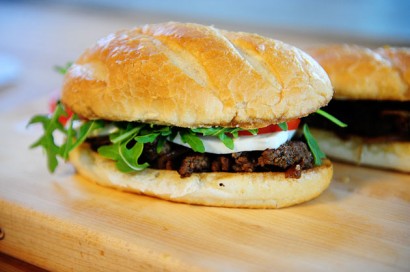 Season meat with salt and pepper. Set aside.

Melt 1/3 stick of butter in a heavy skillet over medium-high heat. Cook onions for several minutes, until golden brown. Remove to a separate plate and set aside.

Return skillet to stove and increase heat to high. Add another 1/3 stick of butter. When melted, add meat to pan in a single layer. Do not stir. Allow meat to sit, undisturbed, for a minute in order to brown. With a spatula, flip meat to the other side and allow to brown. Reduce heat to low. Add onions back into pan, then add Worcestershire, Tabasco, and remaining 1/3 stick of butter. Stir and allow to simmer, adding more Worcestershire or Tabasco as desired.

Melt 1/2 stick of butter on griddle or in a separate skillet. Place roll halves, cut side down in butter and brown over medium-low heat until golden brown.

To serve, spoon meat/onion mixture over bottom half of rolls. Spoon 1-2 tablespoons pan juice over the top. Lay two mozzarella slices on each sandwich, followed by two tomato slices. Top with a generous amount of arugula, then press the top half of the roll on top. Cut in half and serve immediately.

This turned out great! We really enjoyed it!

The MM sandwich is outstanding, and you may have to just call this one the “mmmm” sandwich. Or did you already think of that?

Yum! A super easy and delicious supper! Needed something fast and this fit the bill and then some. Cutting up the meat and then simmering it in the sauce helped it from being tough. Loved the addition of cheese, tomatoes & arugala! LOVE this! (As did my 18 year old son & hubby!)

Well, Ree, you’ve done it again. You’ve made my boyfriend love me even more with this recipe. Super tasty as he would say. Wonderful flavor, fresh veggies, and creamy mozzarella…how come I cannot come up with this stuff? Hats off to you for this delicious sandwich!!

This is my favorite version of the MM sandwich!

We loved this!! I wasn’t so sure as I am not a fan of chopped steak. But these sandwiches are so good! My family loved them! I made the mistake of draining a little of the liquid at first as I was worried the meat was boiling rather than browning. ha Wish I hadn’t done that and kept more liquid! That makes all the difference having enough to drizzle on top of the meat on the bread. I also used Pepper Jack Cheese to give it a little more spicey kick. The kids had the mozarella. Either way it’s delish!! And for the rolls. I sliced, butter and broiled them. It would take too long to brown that many rolls in a skillet so it was just faster for me. And they turned out delicious.

I made these for my friend, her daughters and my husband. The deliciousness has snowballed from there as everyone keeps talking about it and passing on the recipe. I’d say the veggie lovers (like me) really appreciate the freshness of of the arugala, tomato while the meat lovers left it in its “natural form”. Thanks so much for sharing this it is already a new favorite!

It may be tough to agree on which movie to watch, but an incredible snack is something everyone will love!
END_OF_DOCUMENT_TOKEN_TO_BE_REPLACED

Here's a quick and easy dish for those busy nights. Be a hero in 30 minutes or less!
END_OF_DOCUMENT_TOKEN_TO_BE_REPLACED