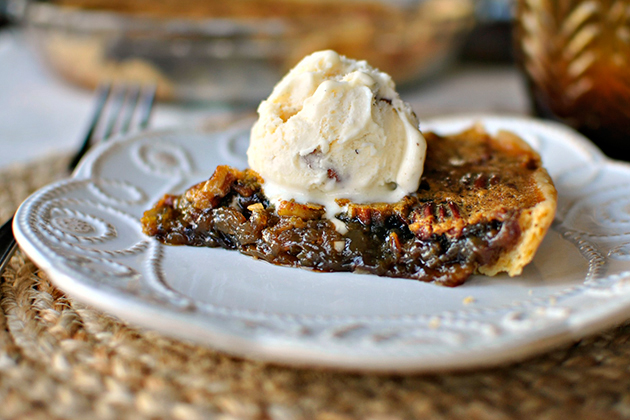 It’s pie season. (Then again, when is it ever NOT pie season?) And this, my friends, is one extremely special pecan pie.

Thanks to Megan for sharing her recipe for Nutella Pecan Pie, because I have officially died and gone to heaven. Get this: Nutella is spread on the bottom of a homemade, pre-baked pie crust before adding in the gooey pecan filling and then baking it to perfection. It’s an absolutely brilliant idea, if you ask me.

I’ve had my eye on this recipe since she posted it last year around Thanksgiving. However, this pie doesn’t need a holiday in order to be made. Make it for a friend, or because it’s Saturday, or because you just need to eat a really good pie. I promise you won’t be disappointed. 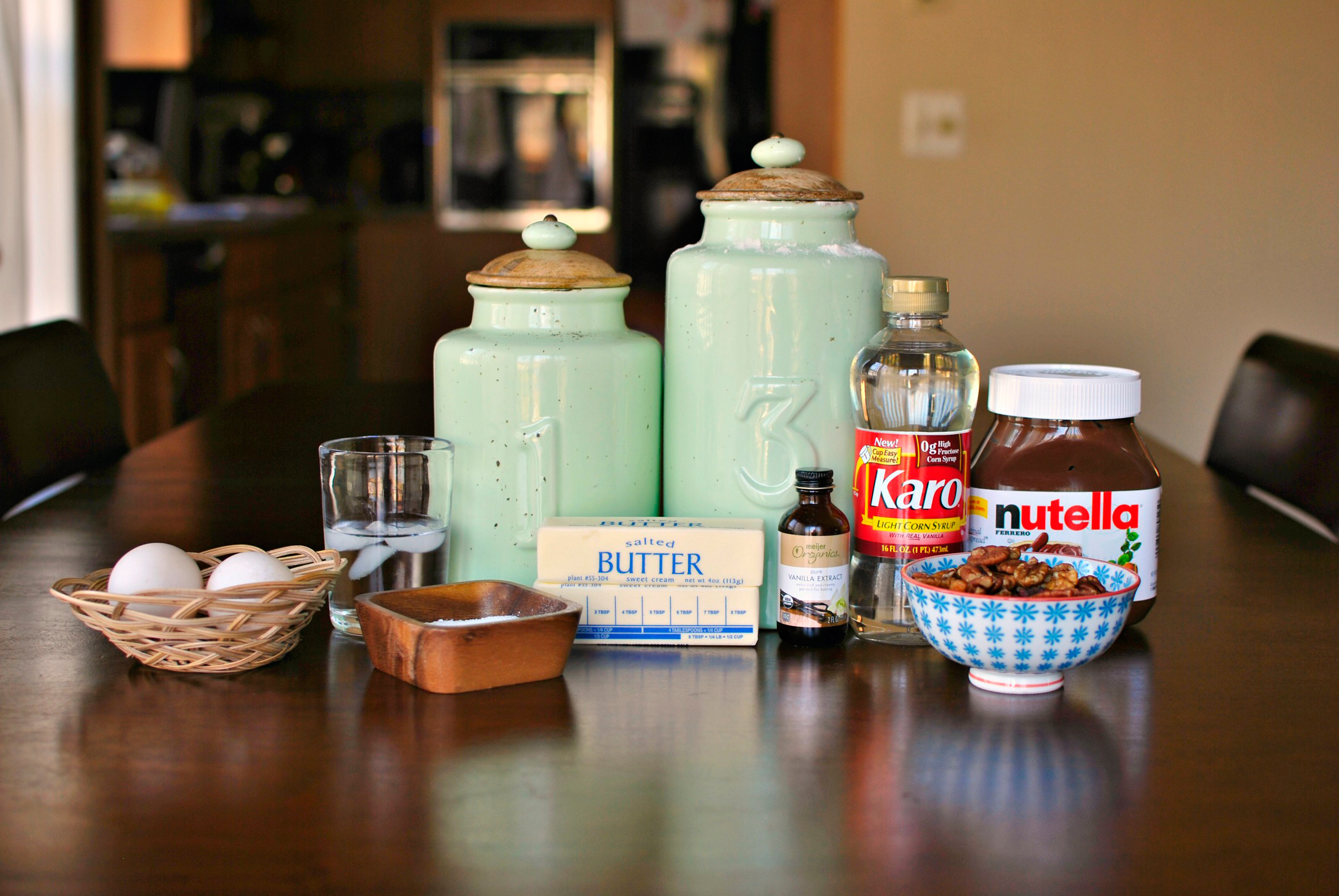 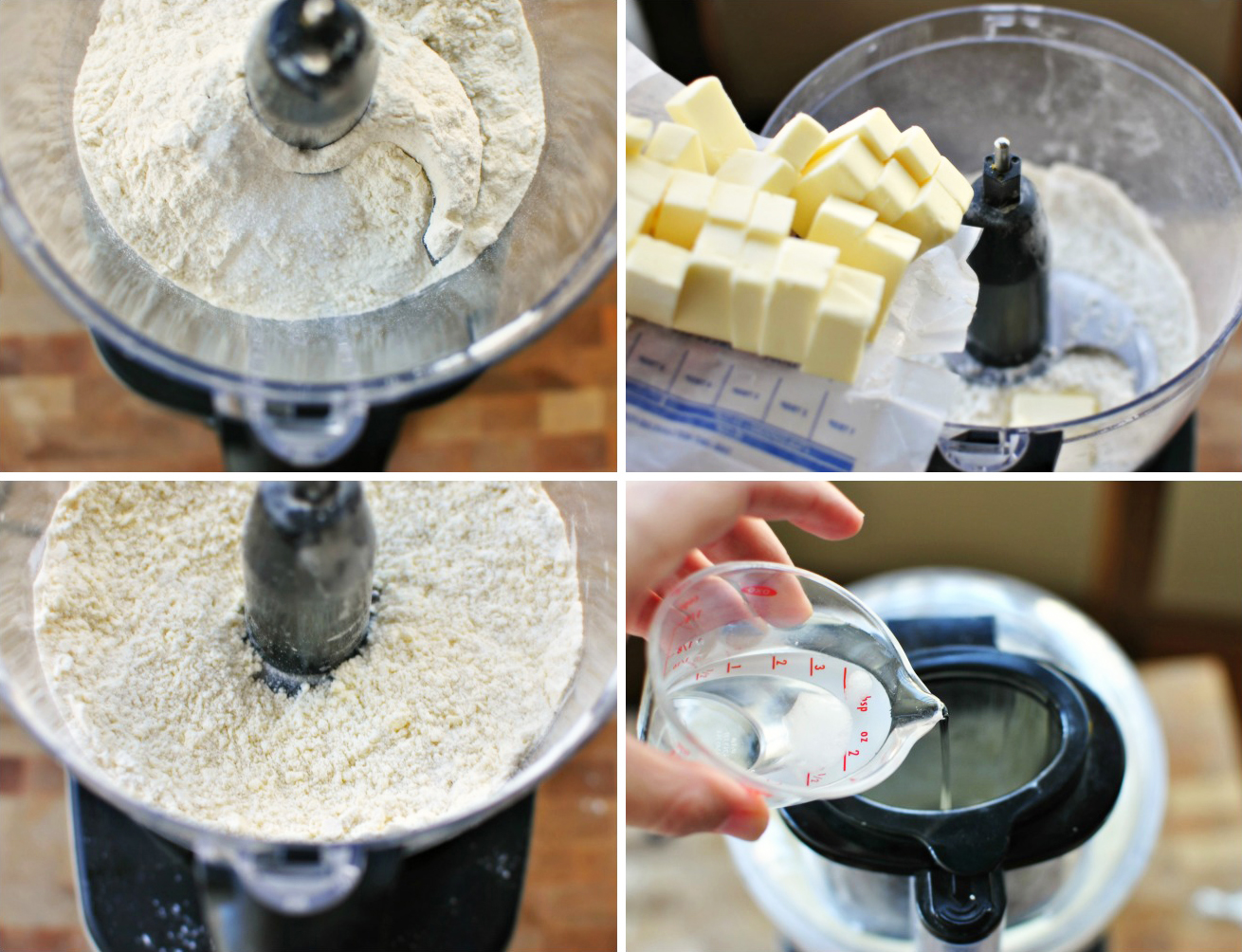 Start with the pie crust. Add the flour and salt into the bowl (fitted with the blade) of a food processor. Give it a quick pulse to combine the ingredients. Then add in the chilled butter and pulse it some more until you see little beads of floury-butter. Then with the food processor on high, slowly drizzle in ice cold water.

For me, I only need three tablespoons of water and not the four. 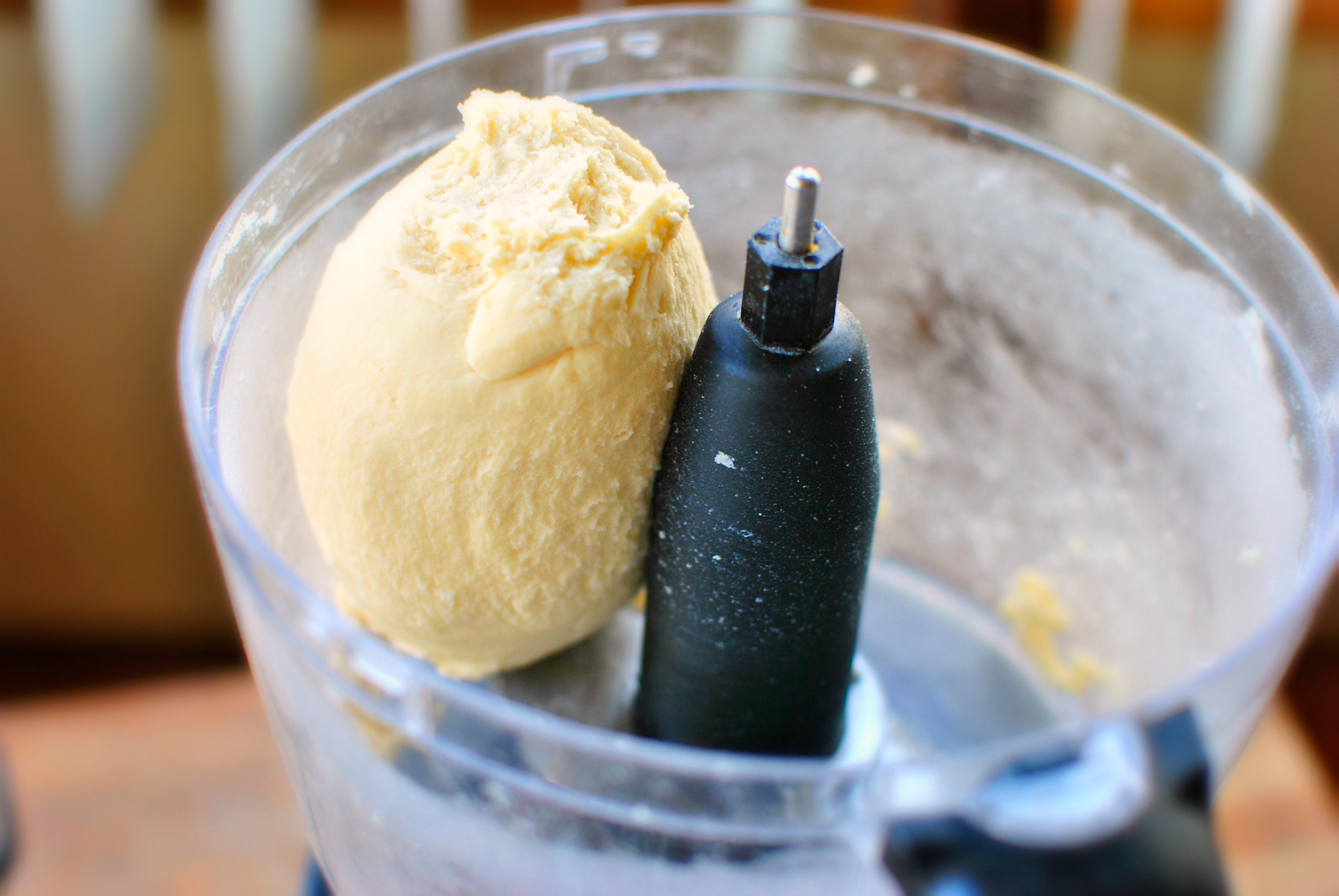 Stop immediately once the big ball of dough forms. 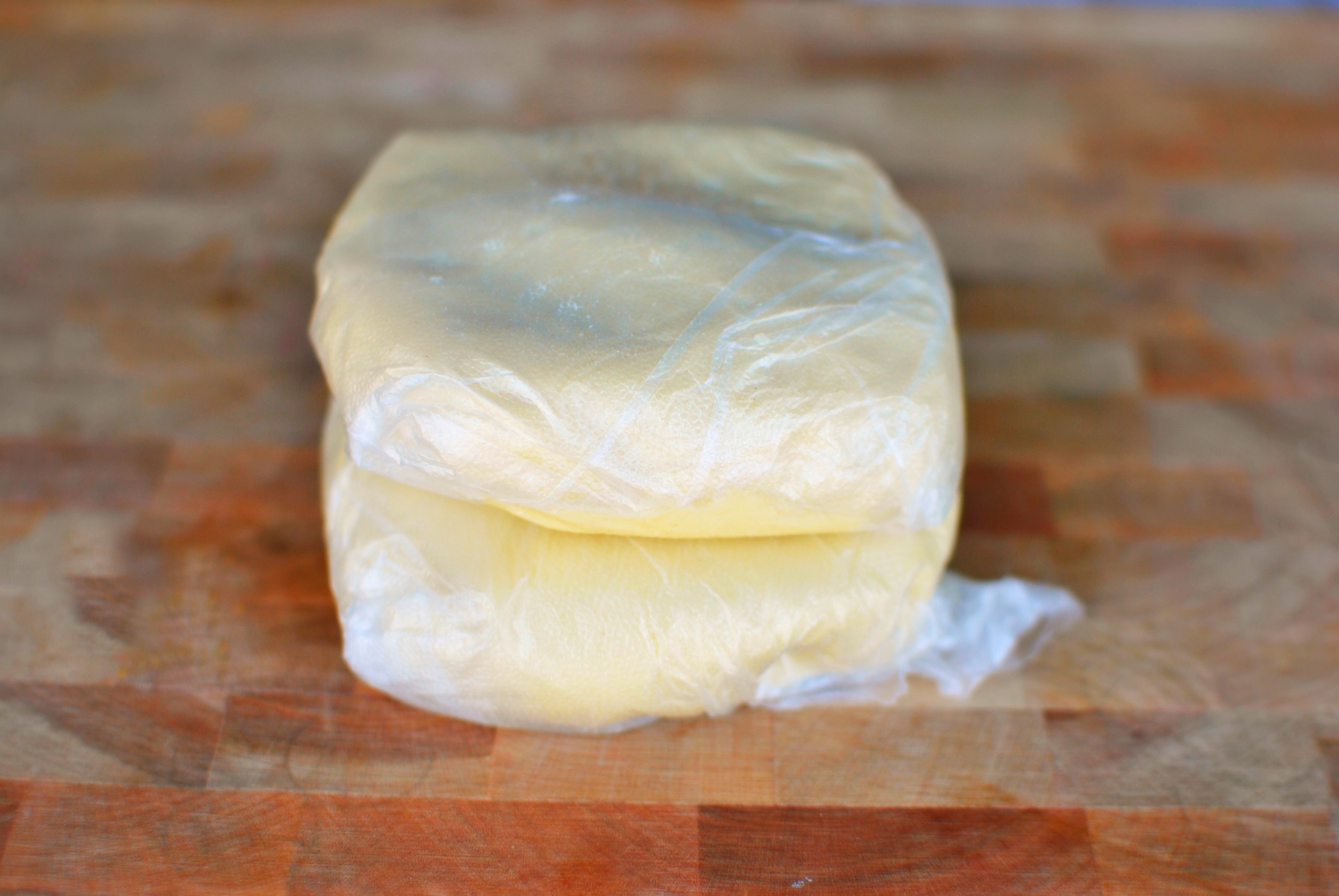 Then divide the dough in half, wrap it in plastic wrap and pop them into the fridge to chill for 30 minutes. You’ll only need one of these discs, so freezing the other half for another recipe down the road is a good idea. 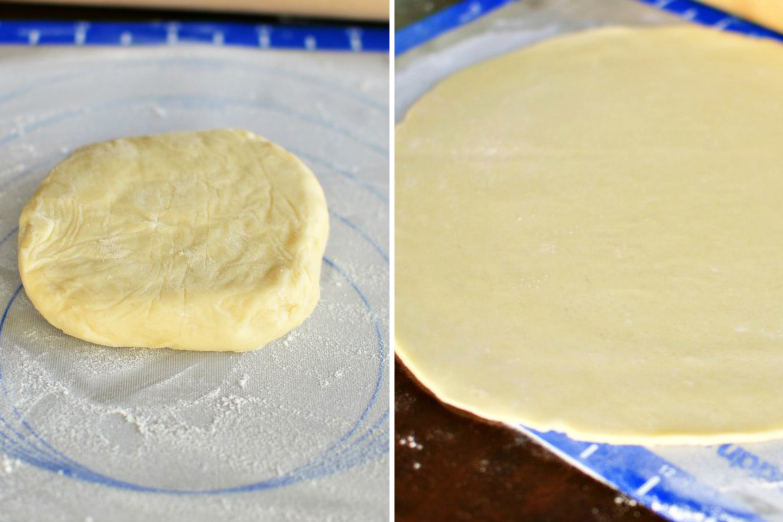 Then, on a lightly floured surface, roll it out so it is large enough to fit a 9-inch pie plate. 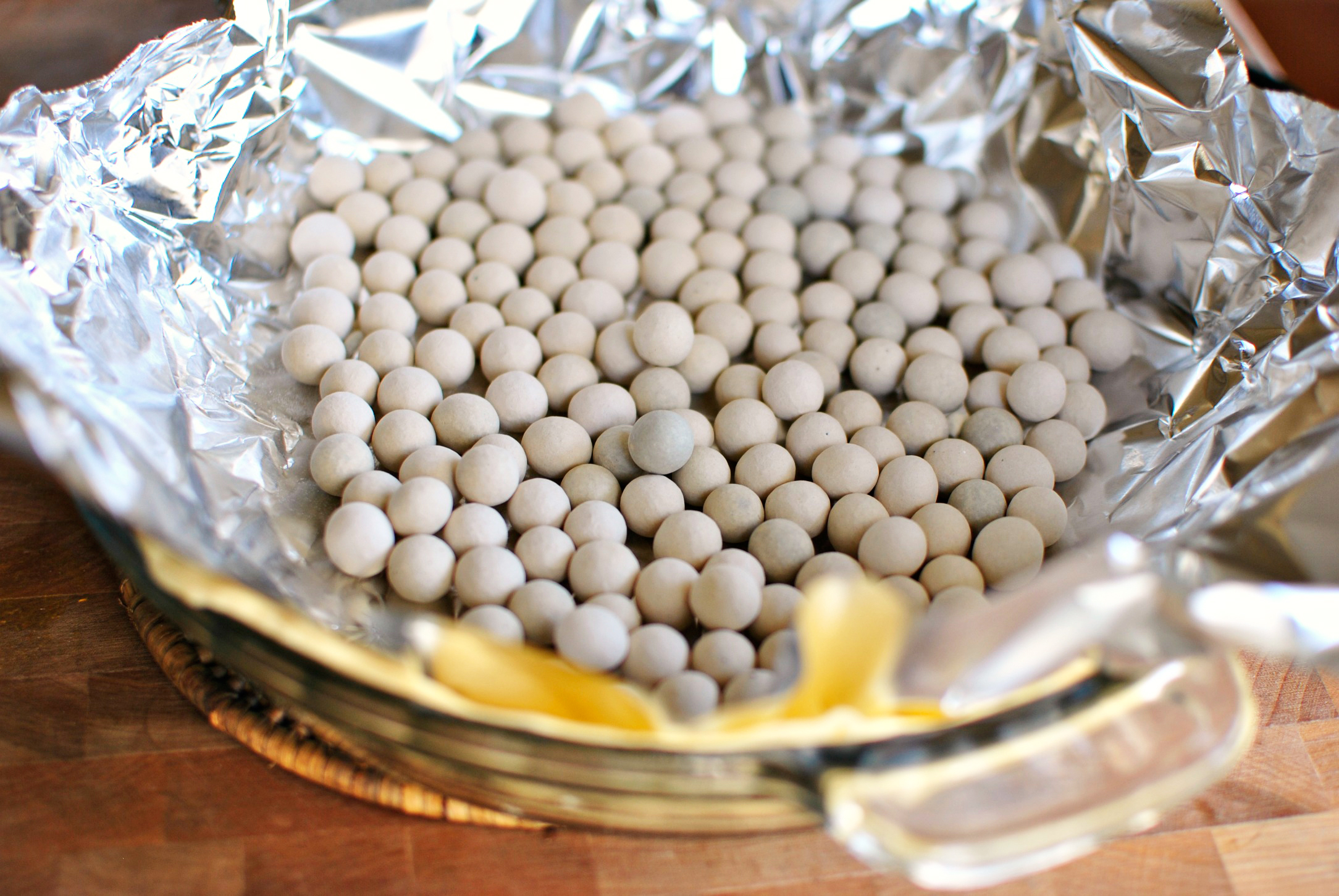 Drape the dough over the pie plate, gently pressing it into the sides. Then cover the dough with tin foil and fill the foil with pie weights (dried beans work well here too!).

Chill the pie crust again for 20 more minutes before sliding the pie crust into a preheated 375ºF oven for 25 minutes. When the time is up, immediately remove the crust and decrease the oven temperature to 275ºF. 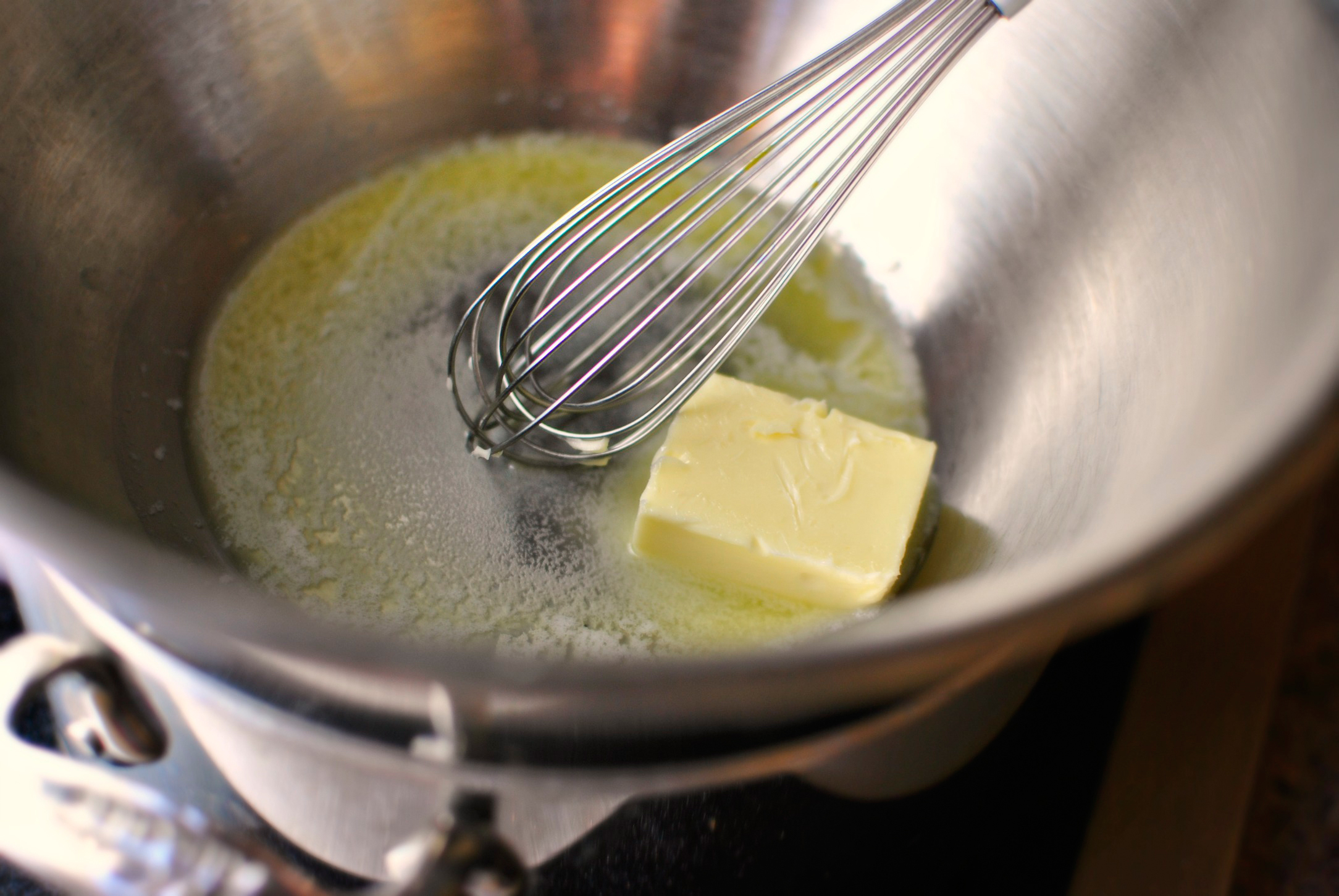 With the pie shell still warm on the counter, make the pecan filling. Start by bringing a sauce pan halfway filled with water to a simmer. Place a metal bowl over the simmering water and add the three tablespoons of butter and wait for the butter to melt. 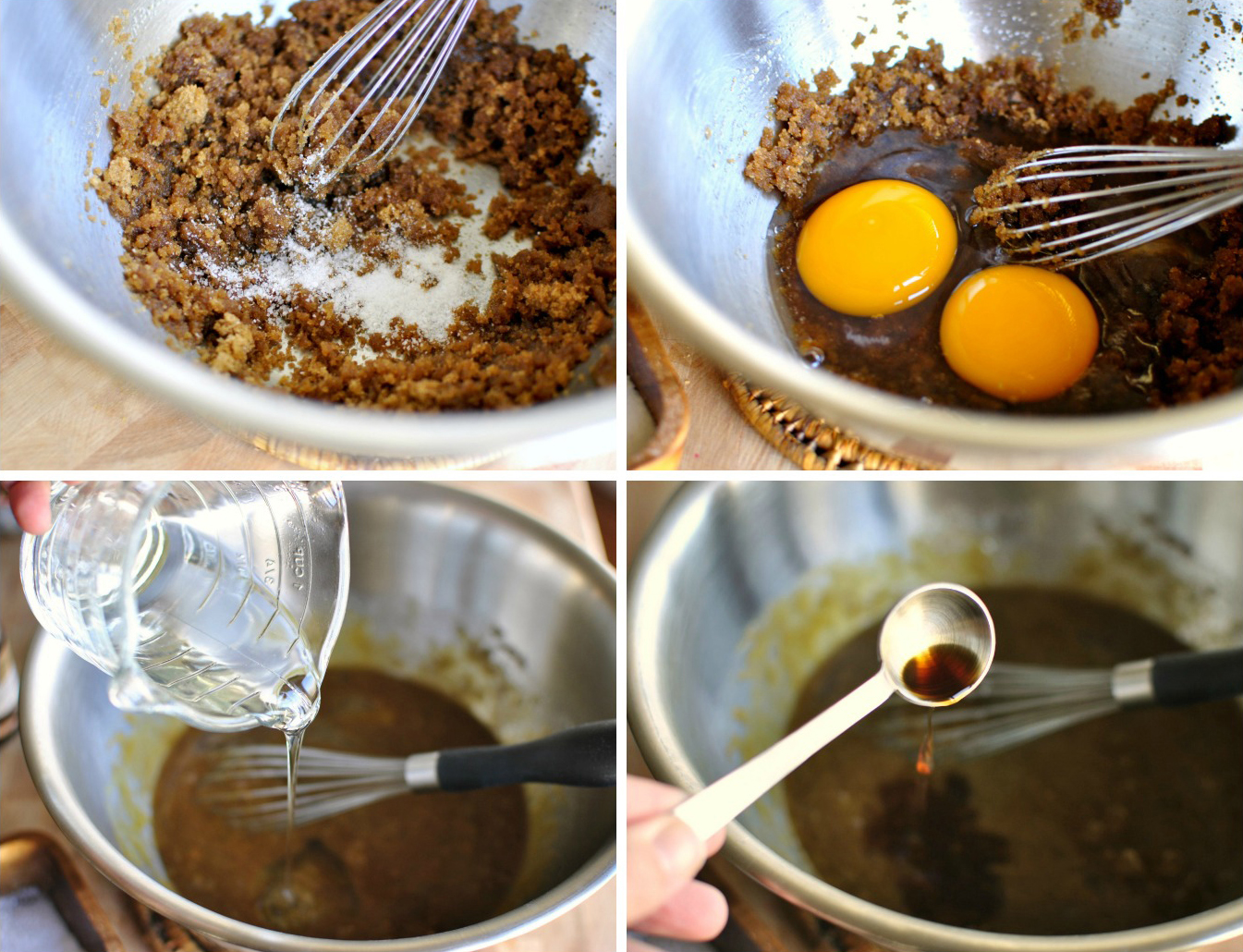 Then remove the bowl from the simmering water and whisk in the brown sugar, salt, eggs, corn syrup and vanilla. 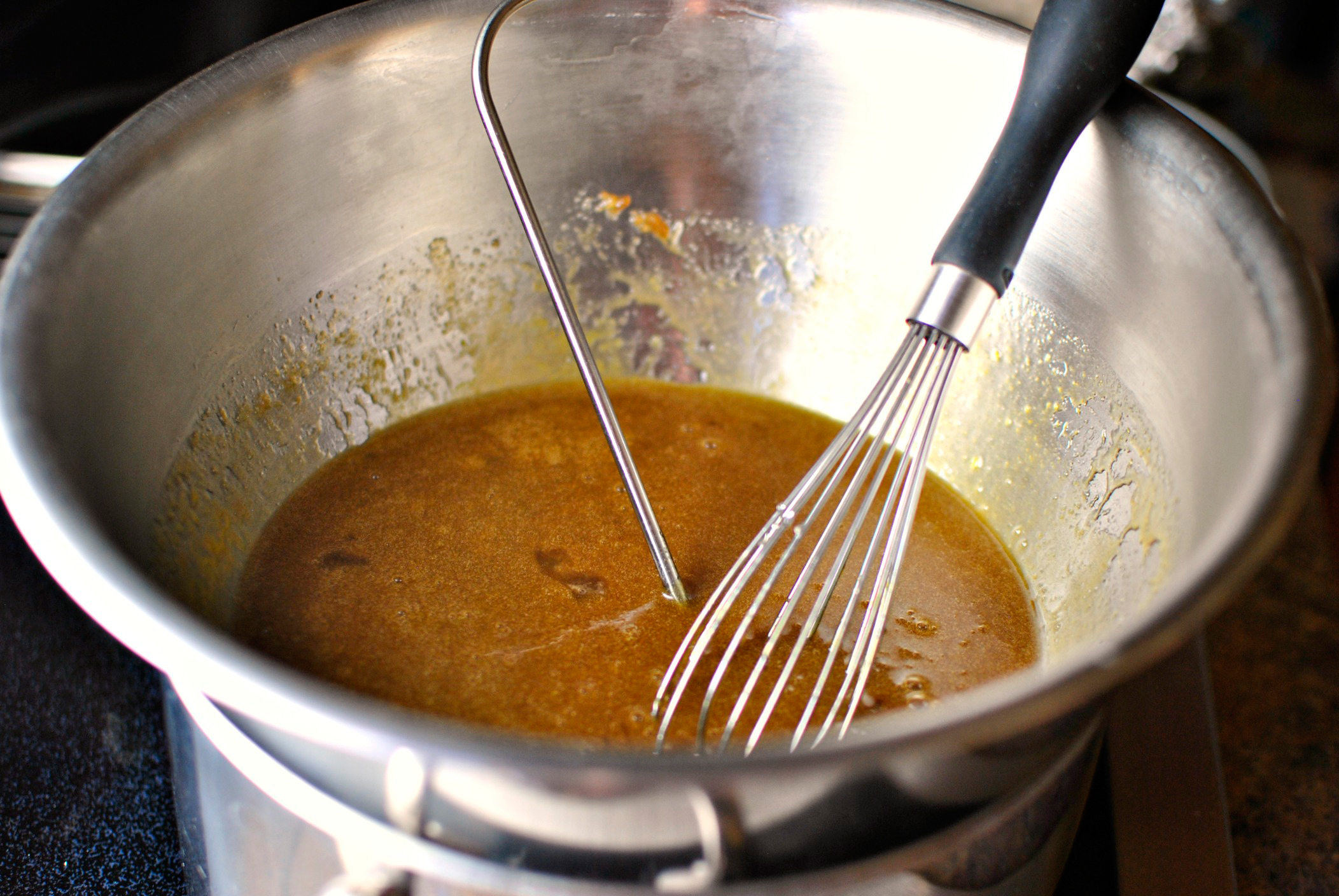 Then place the bowl back over the water and, using an instant-read thermometer, heat the filling up to 130ºF. 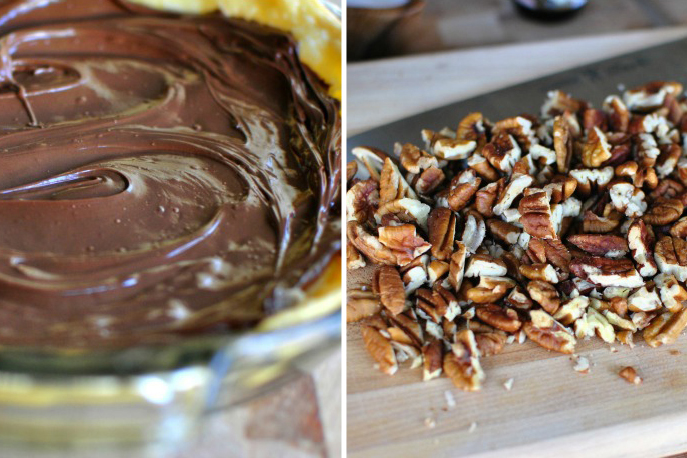 While that’s going on, spread the half cup of Nutella on the bottom of the pie shell and roughly chopped up the pecans. 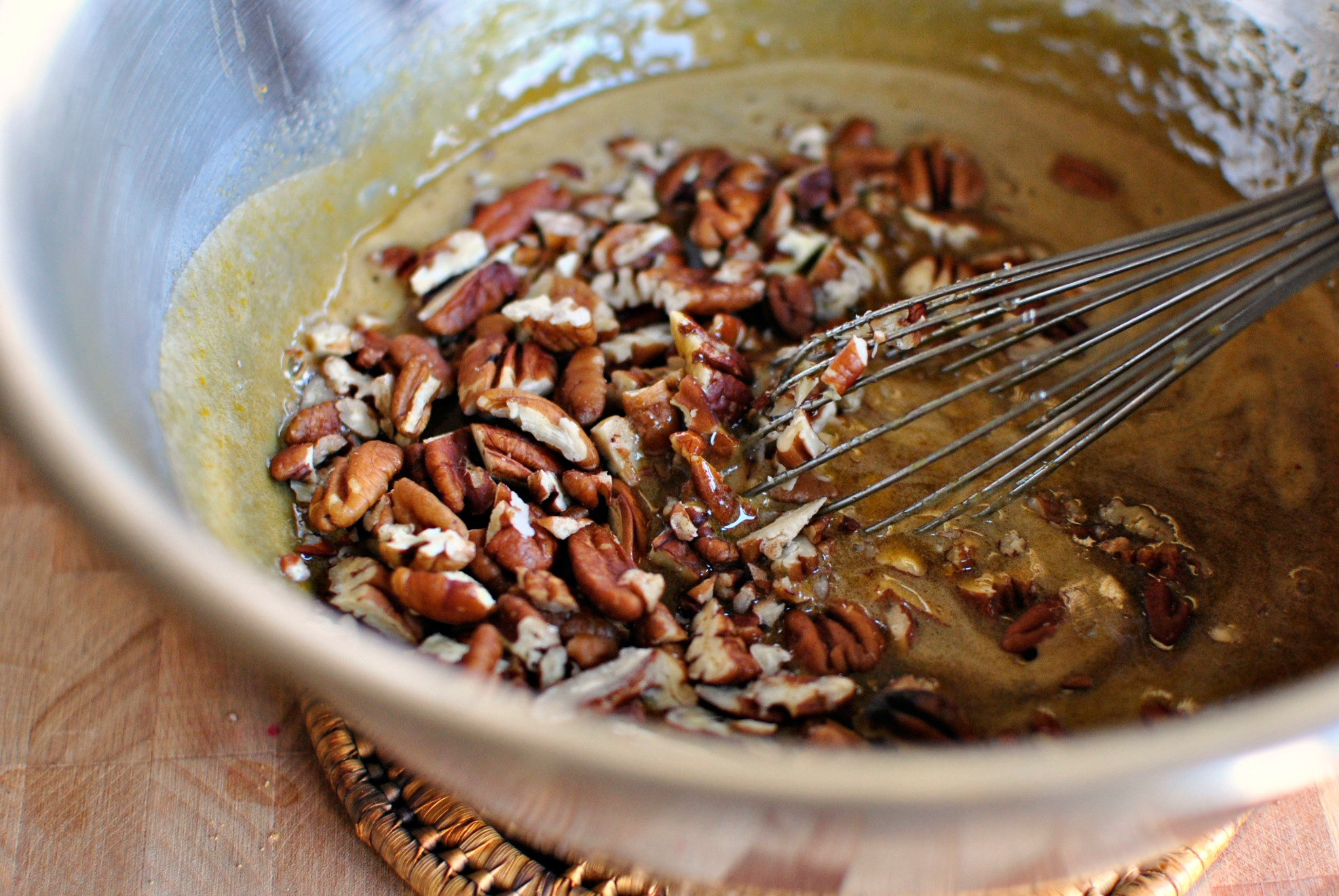 Once the filling is at the 130ºF mark, add in the cup of chopped pecans. 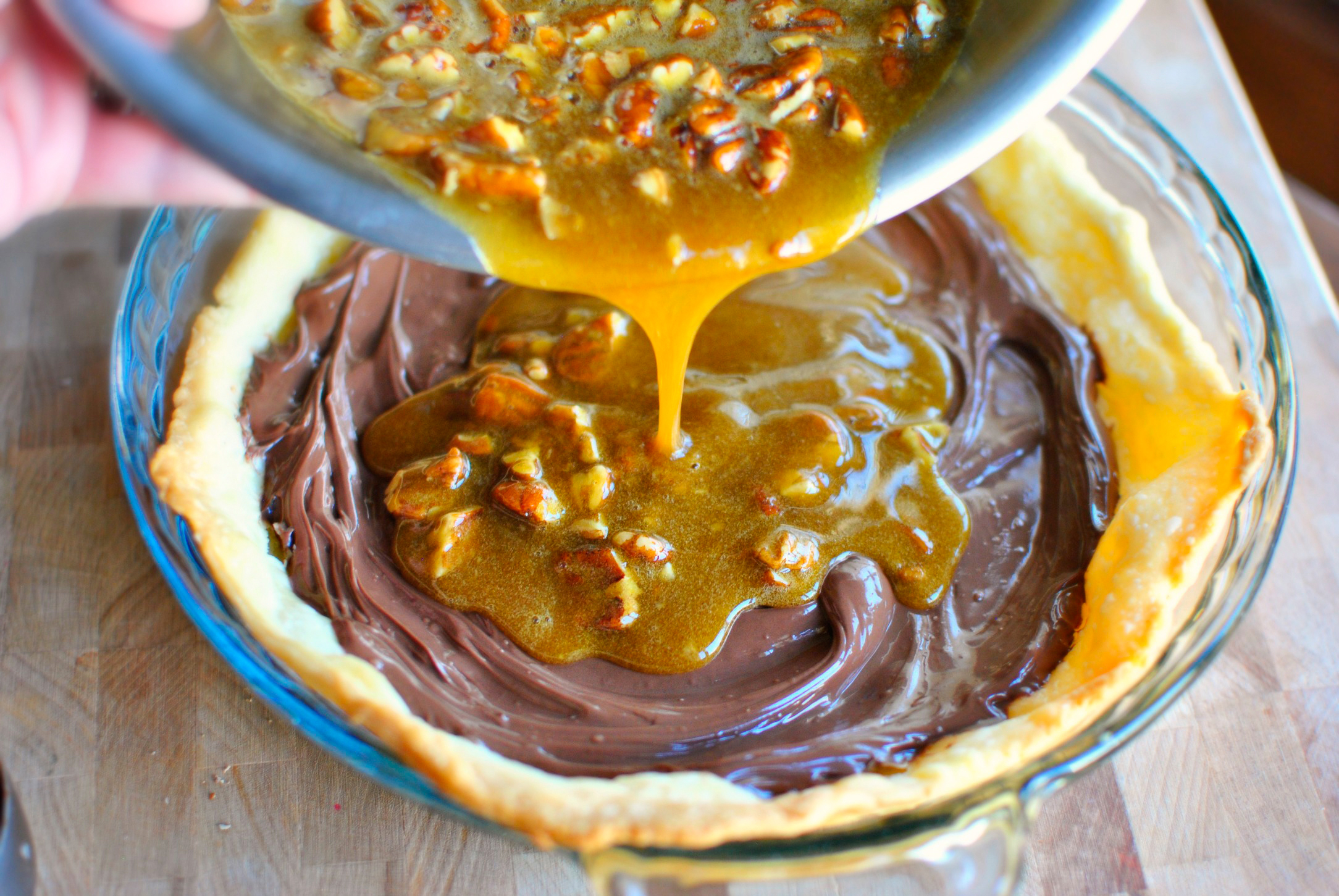 And then pour all that goodness into the Nutella-lined pie crust and carefully slide it into the oven. Bake for 55 minutes. 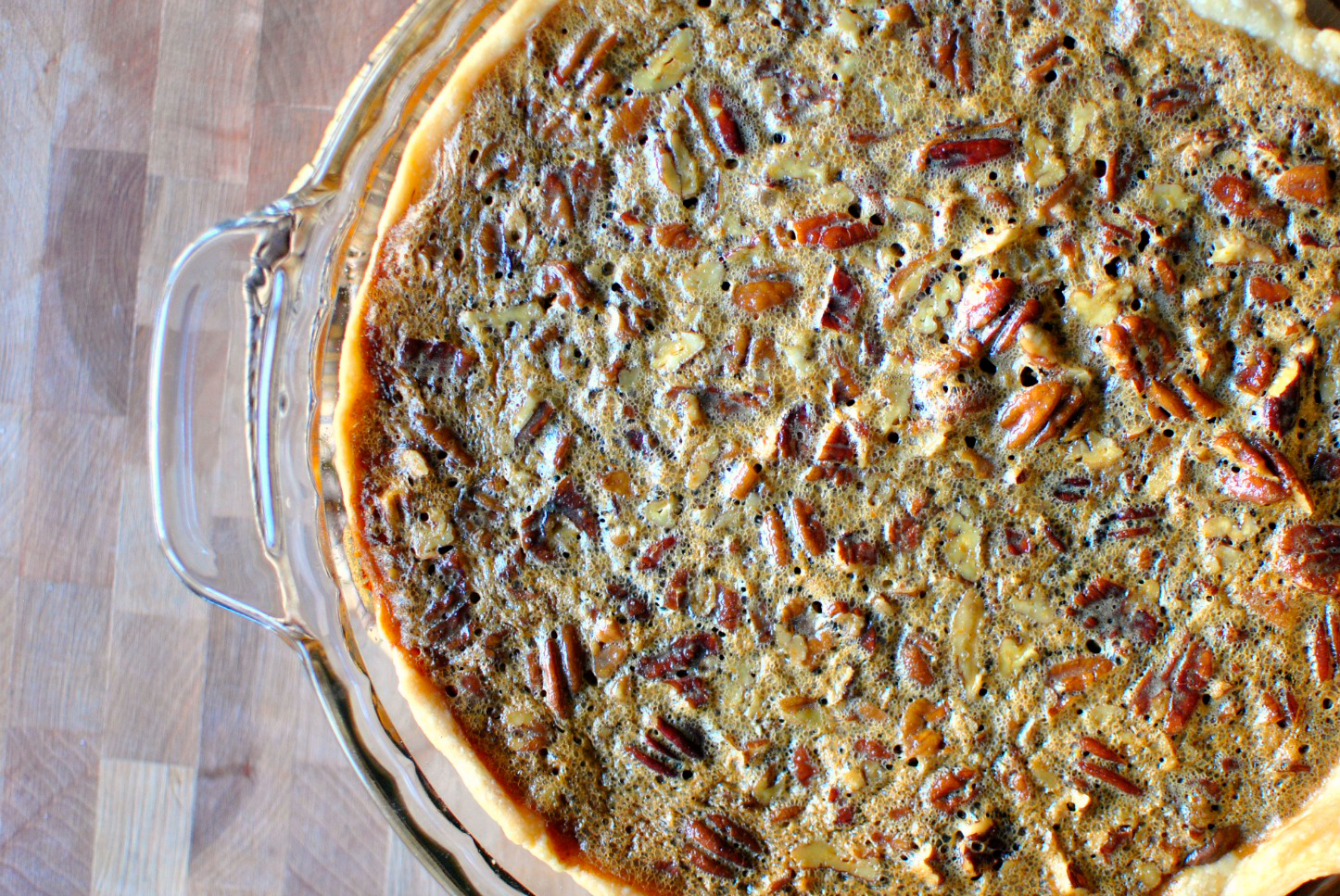 After the pie is finished baking, painstakingly wait for the pie to cool before slicing. (It’s hard to wait, I know.) 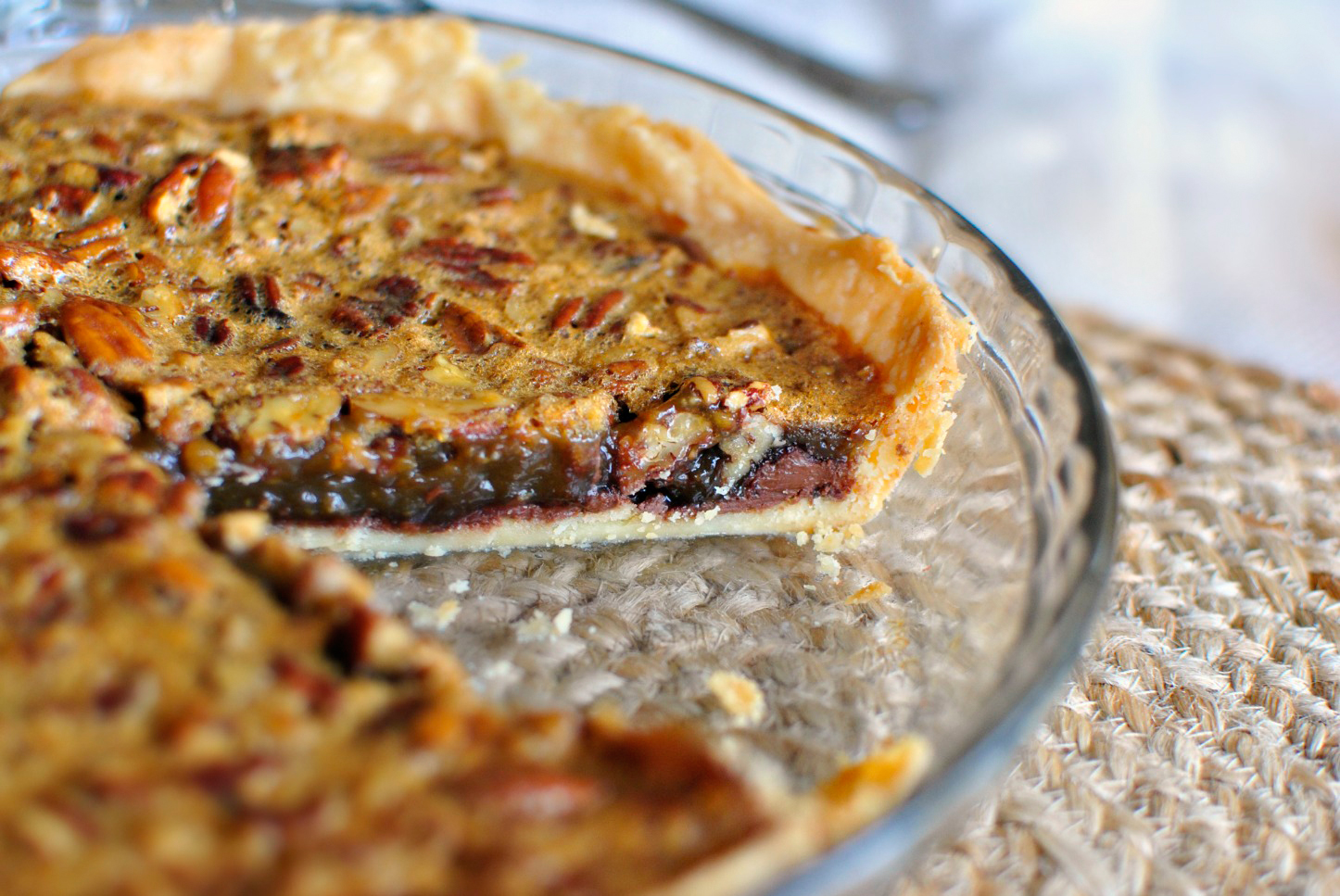 I had no qualms about serving myself a generous slice nor about topping it with a scoop of butter pecan ice cream. It was outrageously delicious. 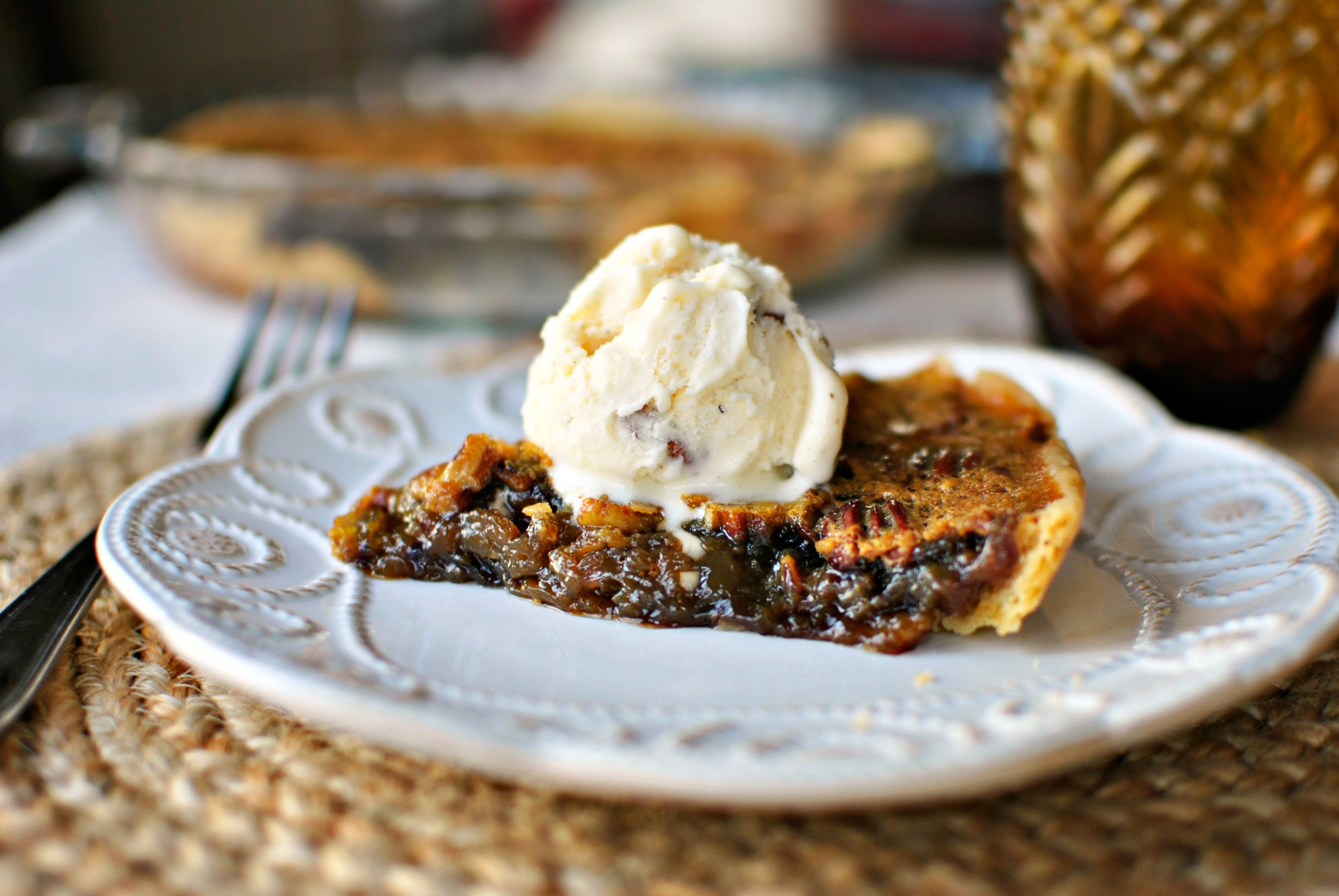 This pie is truly amazing. The pie filling tastes like a traditional pecan pie and then you taste the Nutella and it’s a sensory overload, but in a good way. 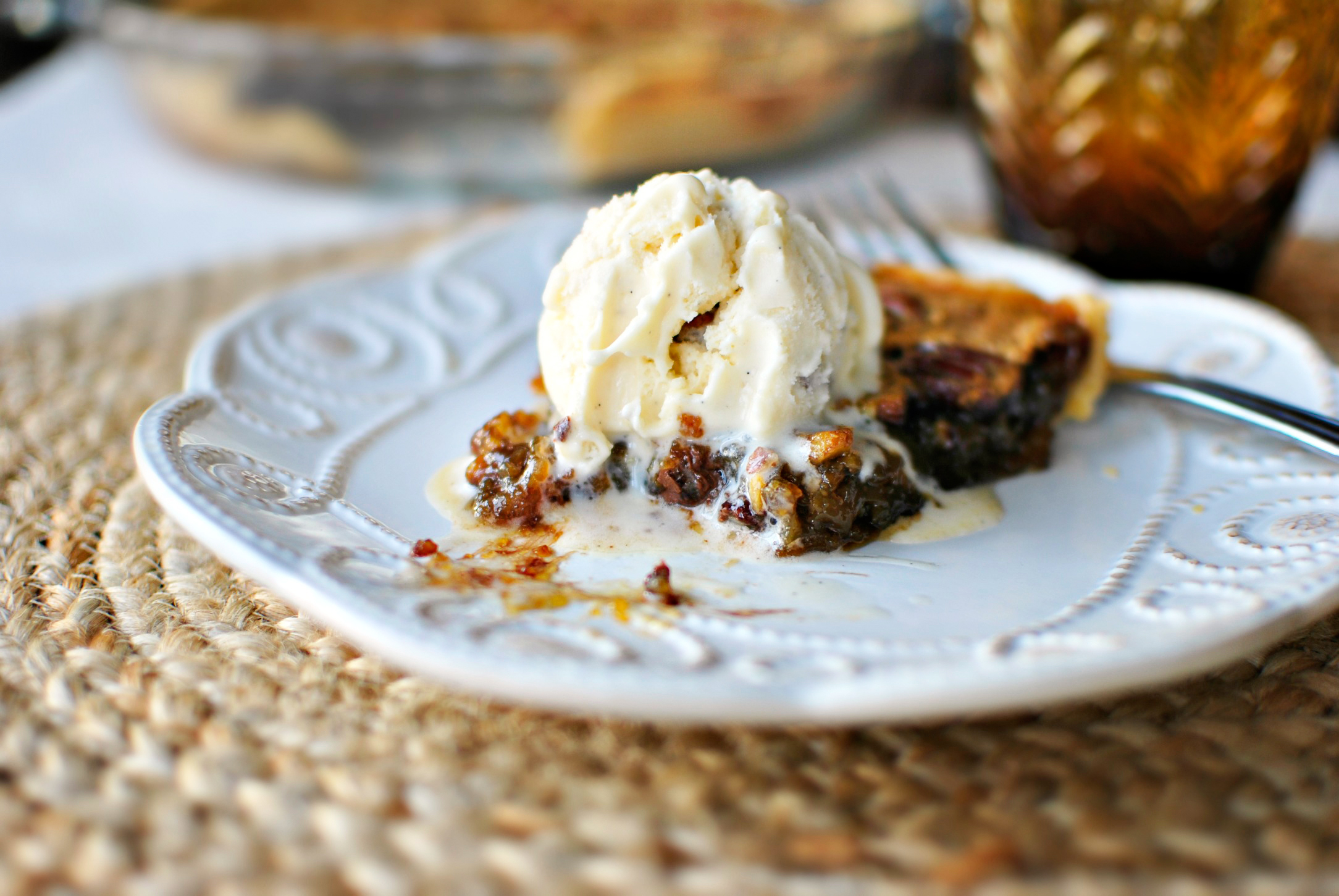 Thanks to Megan, I have a new pie recipe in my pie rotation. And I can bet you guys will love this pie as well!

Please take the time to make Megan’s delicious Nutella Pecan Pie, and while you’re eating it, stop by her blog, Wanna Be A Country Cleaver, for more incredible recipes and a lot of great laughs. You also can find her recipes right here on Tasty Kitchen in her recipe box.

Thanks again for another great recipe, Megan! 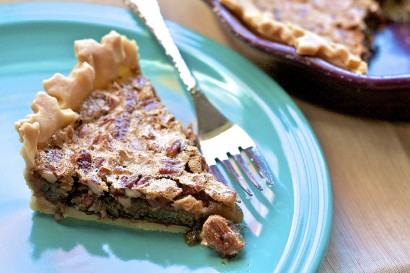 A chocolately and sinful twist on a classic!

In a food processor, pulse together salt and flour until combined. Add in butter and pulse until small beads form. On high, add in cold water until dough starts to ball. Wrap in plastic wrap and chill for 30 minutes before rolling out. Split the dough into two and wrap both halves in plastic wrap. Place one in the fridge to chill before rolling out and reserve the other one for a later date by freezing. Once the one in the fridge has chilled for a half hour, roll out on counter covered with flour large enough that it fits your pie pan. Place the dough into the pan.

With 1 pie crust in pie pan, chill the crust for 20 minutes. Then place a layer of foil into pan over crust and fill with pie weights. Bake for 25 minutes. This will help begin to cook the crust before the filling goes in.

After your pre-baking is done, remove the crust from the oven and turn oven temperature down to 275 degrees F. Make sure that the pie crust is kept warm by sitting it on top of your stove while you prepare the filling for the pie.

For the filling: Melt butter in a metal bowl set in a skillet of water that is just below a simmer (or use a double boiler). Remove the bowl and from the water when butter is melted, whisk in sugar and salt. Whisk in eggs, corn syrup and vanilla. Place bowl back into the water and whisk until hot and the temperature of the mixture registers 130 degrees F on an instant-read thermometer. Remove from the heat and whisk in pecan pieces.

Into the bottom of the pre-baked pie crust, smear the ½ cup of Nutella over the bottom evenly. Pour in the pecan mixture. Bake entire pie at 275F for 55 minutes. Cool on a wire rack for at least two hours or devour at room temperature.

i am a pecan pie fanatic! this looks so good. i guess we are thinking alike today. i just posted a recipe for nutella hazelnut bars on my blog. nutella is a staple in our pantry!

I make pecan pies for Christmas every year. This year, I will make one of these and one of the regular ones and let my family try them both. This sounds so good, and I always have a jar of Nutella in the pantry for my granddaughter.

You got me at Nutella. Nutella is god on anything. Even steak and pizza. I haven’t tried that but I’m pretty sure it’ll be good.

and to think, just yesterday at the grocery, I picked up and set back down a jar of Nutella.
sigh, I need to make another trip back to get it now!

Sounds insane — in the very best way of course!