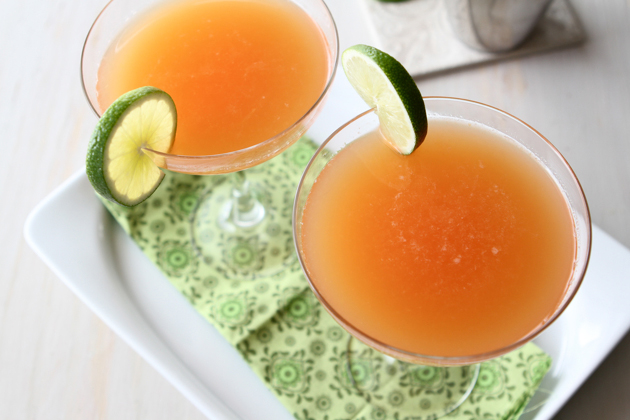 One of the joys of late spring and early summer is the abundance of rhubarb at the markets and in my neighbors’ backyards. Okay, those neighbors haven’t actually offered to share their rhubarb with me yet, but perhaps I could bribe them with a couple of rhubarb desserts or, better yet, one of these knock-you-on-your butt, tasty Rhubarb Margaritas.

Tasty Kitchen member Gaby (who is also a TK Blog contributor) knew what she was doing when she made a simple syrup out of fresh rhubarb and mixed it with fresh orange and lime juices, and kicked it up with tequila and cointreau. Quite honestly, these are some of the best margaritas I’ve ever tasted. They are not to be missed. 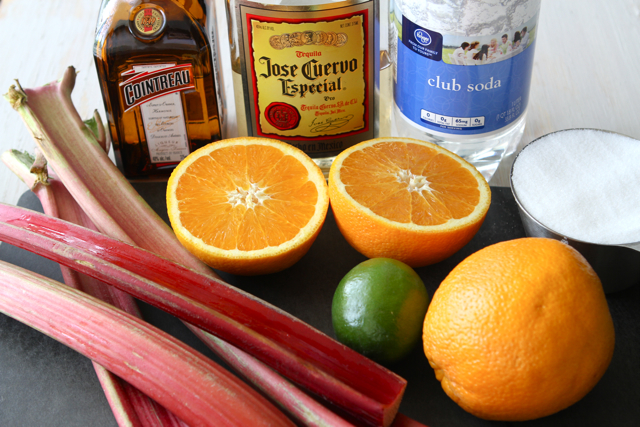 These are all the ingredients you’re going to need to mix up this naughty little concoction. 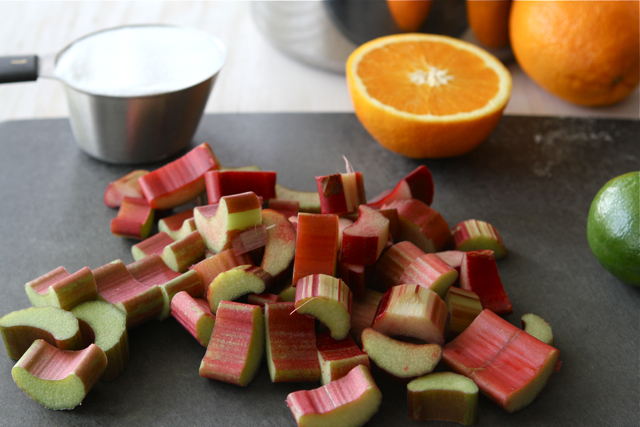 The first step is to make the rhubarb simple syrup. Just wait until you see how pretty it is! Chop up the stalks of rhubarb. 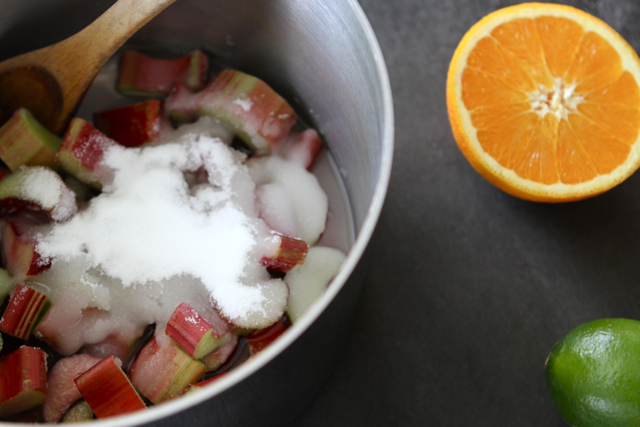 Toss them into a saucepan, along with some sugar and water. Bring the mixture to a rolling bowl, stirring occasionally. I actually turned down the heat to medium (though Gaby doesn’t require that in her recipe). Cook for 10 minutes, or until the sugar is dissolved and the rhubarb releases all of its color. 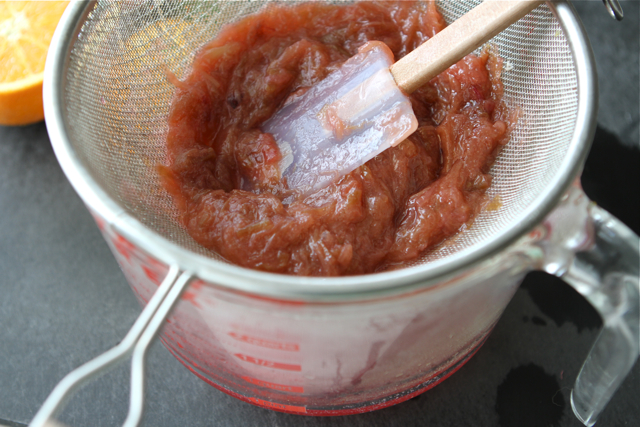 Strain the mixture through a fine-mesh sieve, pressing down on the rhubarb to release all of the syrup. 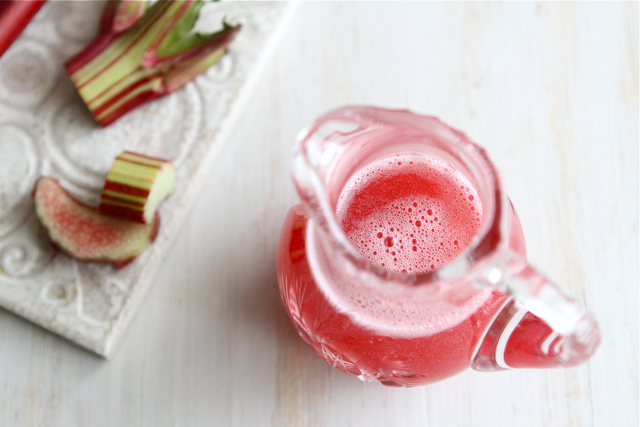 Just look at that syrup. Didn’t I tell you it was pretty? 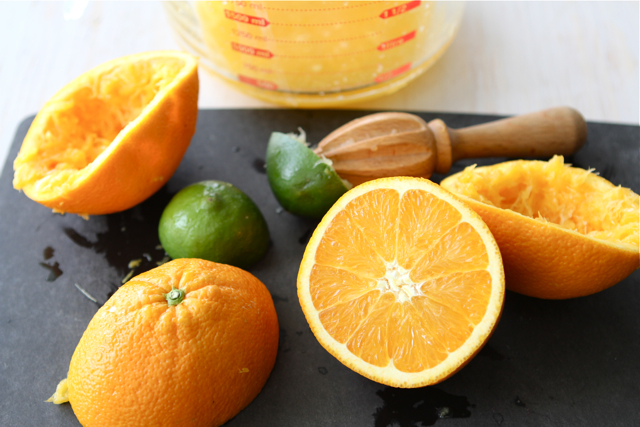 Squeeze the oranges and a lime and combine the juice into a martini shaker. I strained the juice first to get rid of the pulp but that step isn’t absolutely necessary. 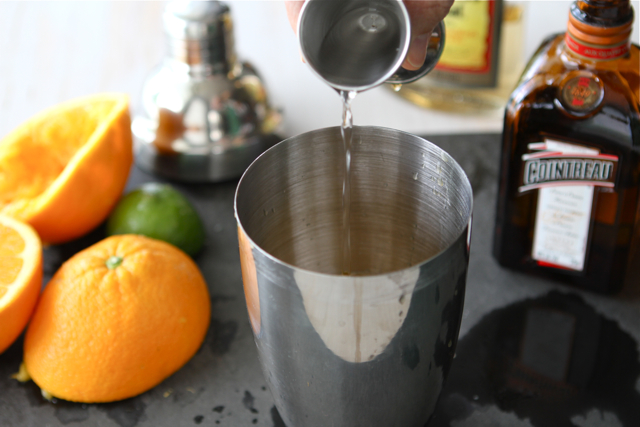 Now here’s where things get dangerous. Pour the tequila and cointreau into the martini shaker. 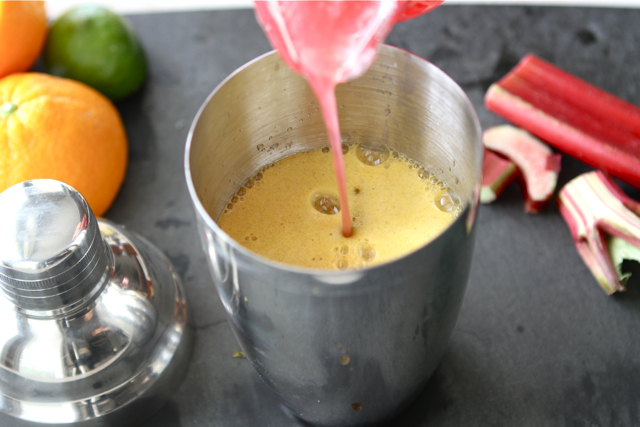 Pour in some of the rhubarb syrup. Give it all a good shake, then add the club soda. The recipe calls for adding the club soda first, but I’ve had experience with shaking club soda and it wasn’t pretty. I decided to play it safe. 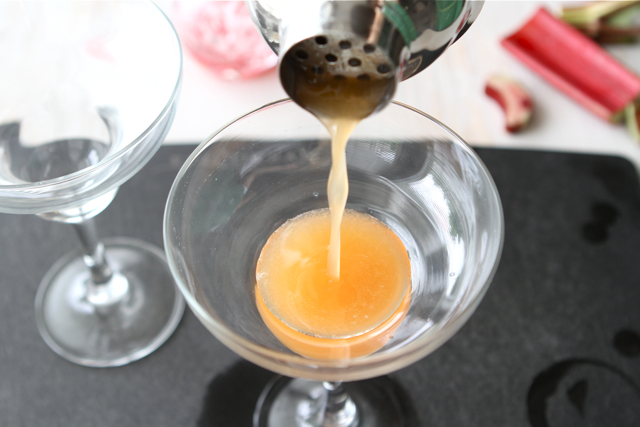 Thanks so much to Gaby for this recipe. Be sure to check out Gaby’s blog, What’s Gaby Cooking. Not only can she mix a mean cocktail, but Gaby is also the queen of all things avocado and guacamole. 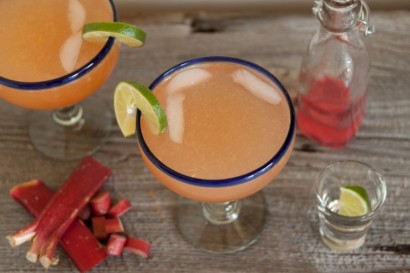 A delicious margarita made with rhubarb!

For the simple syrup: combine the water and sugar in a small saucepan with the chopped rhubarb. Bring to a rolling boil and let cook for 10 minutes until the sugar is dissolved the the rhubarb has released its color and flavor. Remove from stove and set aside to cool. (Makes 1 cup syrup. You will only need 4 ounces for 2 margaritas.)

For the rhubarb margarita: Combine the freshly squeeze orange and lime juice with tequila, cointreau, club soda and simple syrup. Shake in a cocktail shaker for 10 seconds and then serve.

Made these last night. Lots of work for not much margarita. We were disappointed that they didn’t have much of a rhubarb flavor.

It seems little bit complicated but I love it. The colors are just beautiful. Thanks for sharing, great recipe.

I love rhubarb – this sounds so yummy! Thanks for the share! Peace and joy…

I am definately making this!

This will be fabulous as a slushy drink in my Margaritaville mixer!! Yum!

Drink sounds yummy!
Bartenders add soda after the other ingredients are mixed.
Shaking kills the fizz in soda, so it is added at the end.
(Master Bartender in training)

Whoa! This is awesome! What a fabulous way to use rhubarb!

i could reeeeeeeally go for a marg right about now

I had a rhubarb margarita last night! It was so so good. I love using fresh summer fruit in cocktails, like in watermelon mojitos: http://lollingabout.wordpress.com/2011/07/06/wasted-wednesday-watermelon-mojitos/

I ADORE rhubarb and everything you can do with this very wonderful fruit. I never even dreamed of doing a margarita with it but you can dare bet it will be printed out to try this weekend! YUM! Thanks!