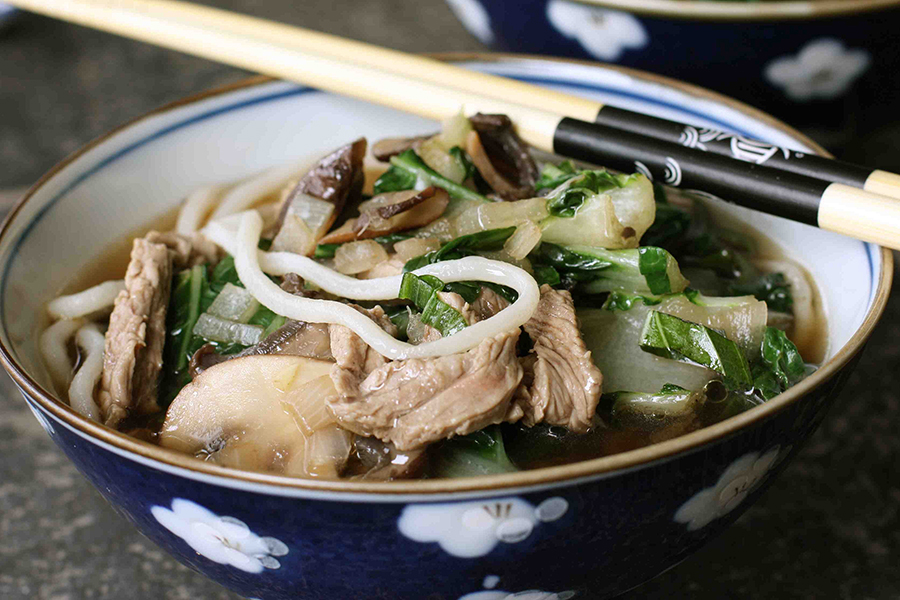 When I headed off for college (which may or may not have been more than 15 years ago), friends and family members regaled me with tales of inedible cafeteria food and the legendary “Freshman Fifteen”. To a certain extent, they were right about the cafeteria food choices. By the end of the first month, I was decidedly sick of chili and chicken noodle soup (not the kind grandma made). The sandwich bar, with its choice of whole wheat bread and fresh veggies, became my solace.

I wasn’t much of a cook at that time. Just ask my parents and they will confirm that whenever it was my turn to cook at home, I made baked potatoes with various toppings. Every time. Well, they say that necessity is the mother of invention, and my taste buds deemed it necessary for me to learn to cook a few dishes to ward off complete food boredom. Before leaving Vancouver and heading to Colorado for college, I bought a beautiful Japanese bowl. I’m not sure what possessed me to do so, but that bowl became the inspiration for many hearty noodle soups that I learned to cook in the dormitory kitchen. 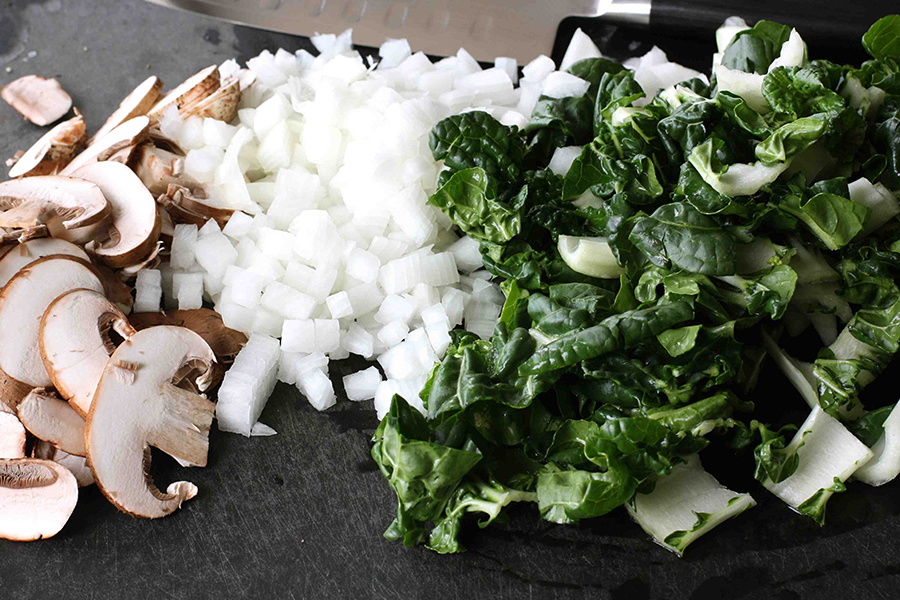 This quick and easy soup is from Tasty Kitchen member, Mary Helen, who also blogs at Mary Makes Dinner. It takes me back to the nourishing soups I made in college and still make today for my family. The New York strip steak, which is cut paper thin, cooks quickly in the savory broth. Rounded out with Chinese noodles, mushrooms, and baby bok choy, this soup is a full meal in a single bowl. 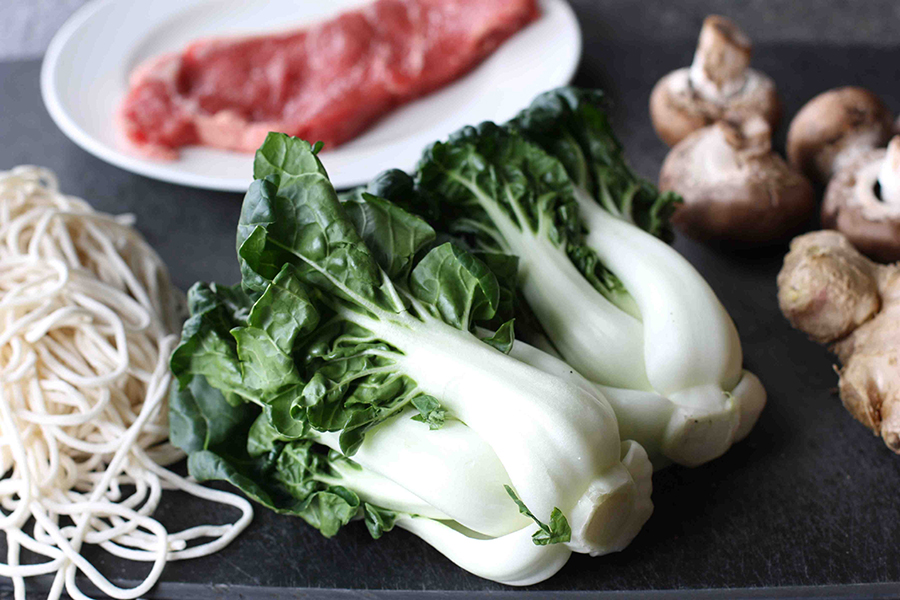 Cook Chinese noodles or thin pasta according to package instructions. Drain and shock with cold water. This will stop the noodles from cooking further and becoming too soft. Set aside. 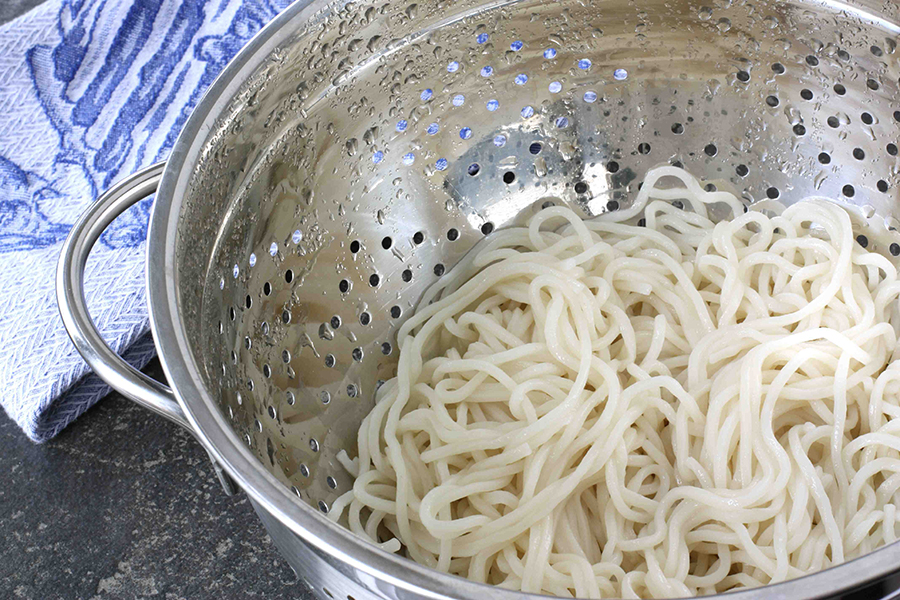 Chop a white onion and two heads baby bok choy (white and green parts). Slice mushrooms. I used crimini mushrooms because the selection of portobello and shiitake mushrooms at my grocery store was pitiful. The crimini worked well, but the shiitake would really put this soup over the top. 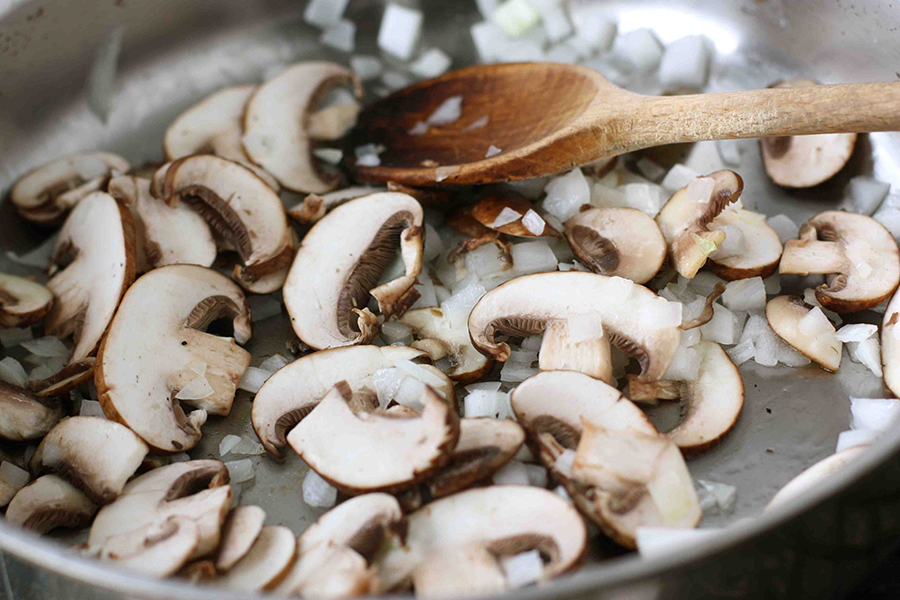 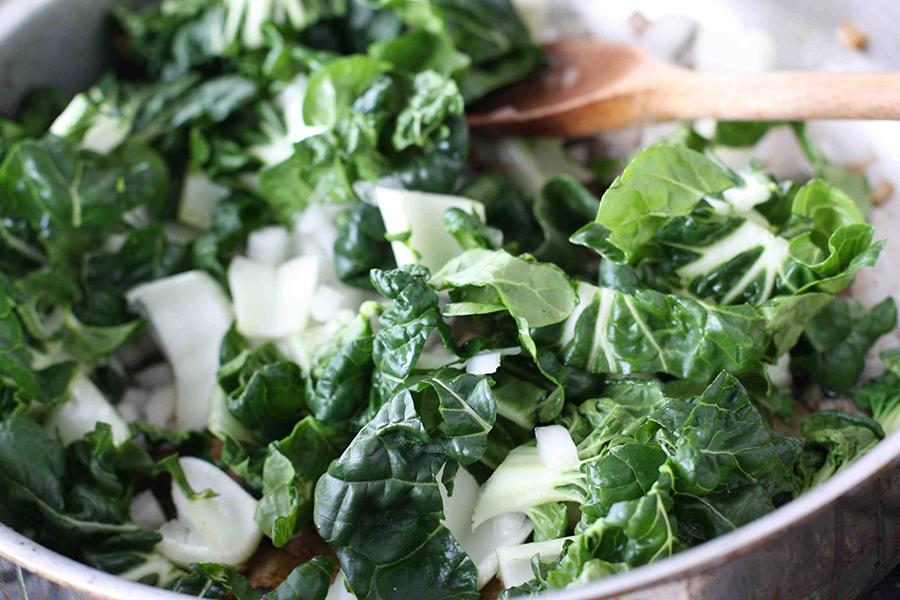 Add the rest of the canola oil and add the chopped bok choy. Cook until the greens are slightly wilted, which won’t take more than 1 to 2 minutes. 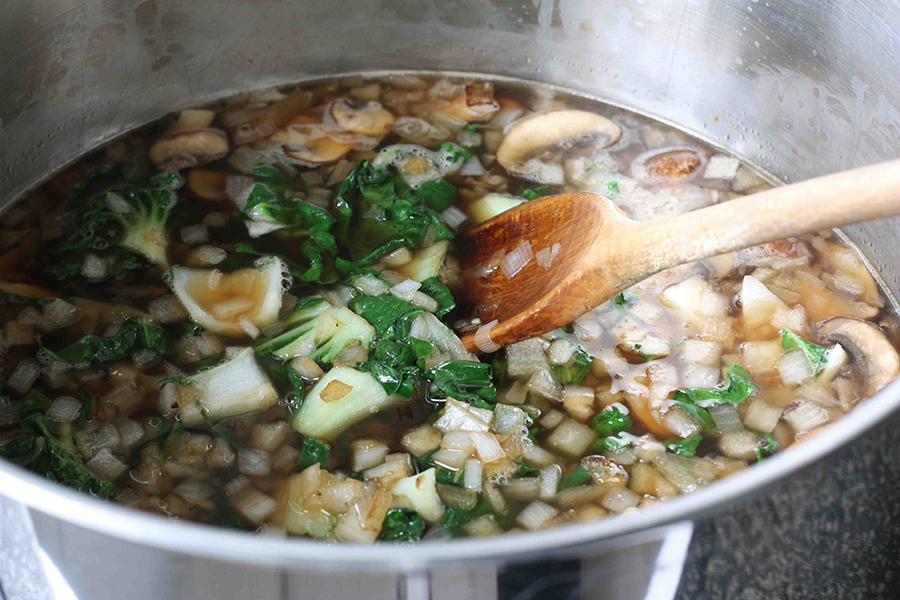 Add to the broth mixture. 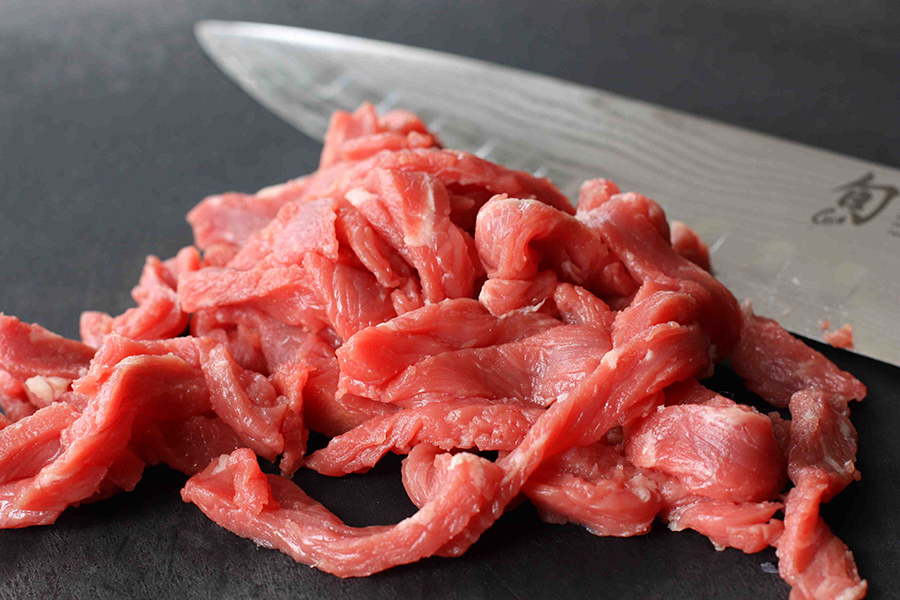 If you let the meat sit in the freezer for 10 minutes before slicing, it will cut very easily.

Add the meat strips to the soup and simmer until the meat is just cooked through. Given that the meat is cut very thinly, this won’t take more than a couple of minutes. 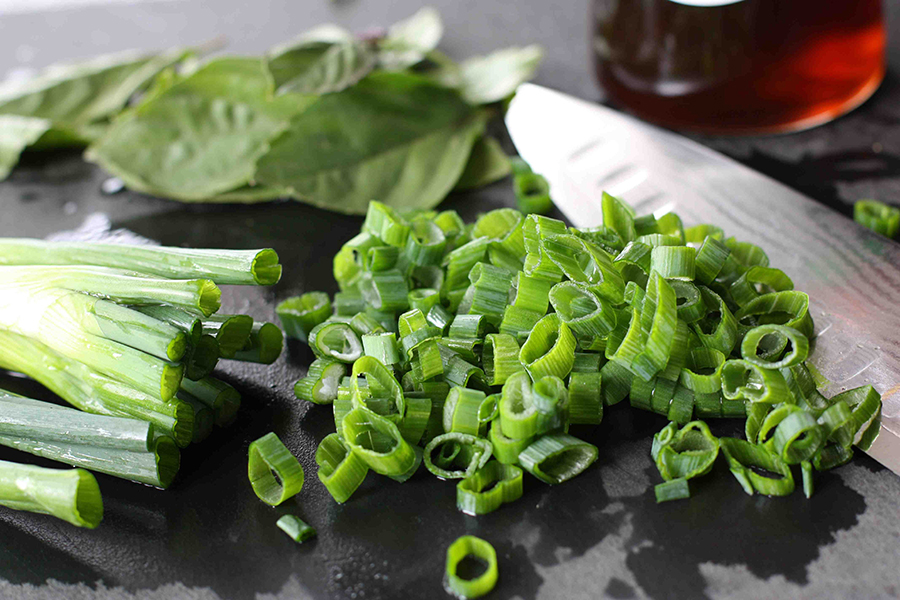 Remove the saucepan from the heat. Stir in chopped scallions, sliced fresh basil, and sesame oil. Season to taste with salt and pepper.

Divide the noodles between four bowls and ladle the soup over top. Serve. 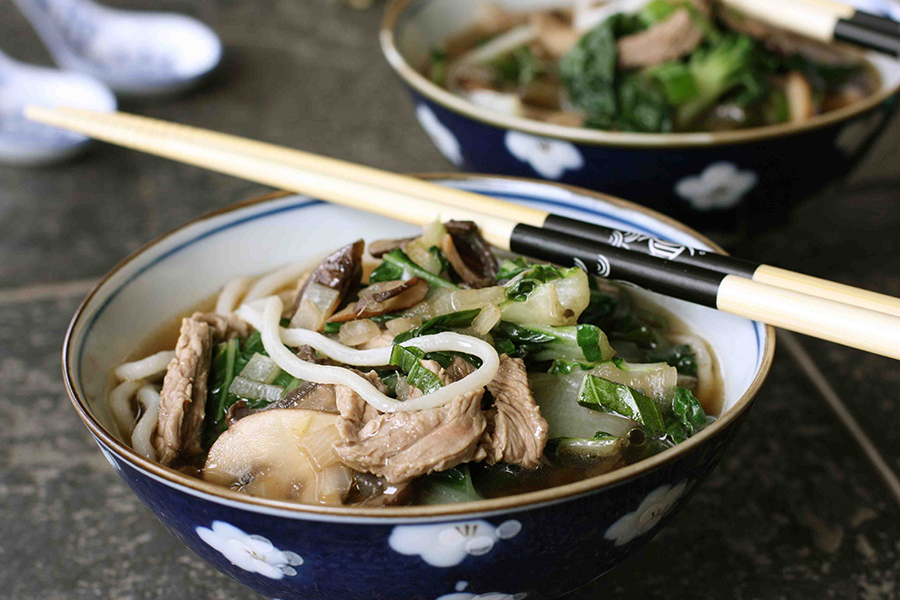 Thank you, Mary Helen, for a soup that will take a regular place in our dinner rotation. Visit her blog, Mary Makes Dinner, for more of her delicious recipes! 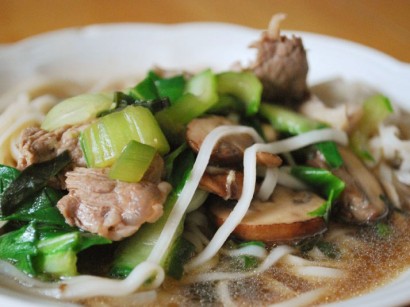 A pho-inspired Noodle Soup made quick, tasty and simple.

Cook noodles according to package instructions, then shock with cold water and set aside. In a large soup pot, combine stock, soy sauce, and ginger. Bring to a low simmer. Warm vegetable oil in a fry pan and saute the mushrooms along with half of the minced onion until browned. Add the mushroom mixture to the soup, then repeat with the bok choy and the remaining onions.

Slice the steak as thinly as possible and add the strips to the soup. Allow the meat to cook through, then remove the pot from the heat. Add the scallions, sesame oil, and basil, and salt and pepper as needed. The noodles can either be added to the pot, or to soup bowls. Ladle soup into each bowl over or along with the noodles. You can enjoy the noodles as is, or you can add a little crushed red pepper or Siracha Sauce if you’d like them hot n’ spicy.

I love noodle soups as well. I’m always lookin’ for new noodle soup recipes so I will definitely try this out! It almost looks like pho. I LOVE pho…if you have not tried it, PLEASE DO!!! Go to a Vietnamese restaurant and order it. They’re fairly cheap…I’ve never paid more than $6 for a LARGE bowl, and if they specify large, it’s really big! You may want to go for a small to try or medium if you’re hungry.

You convinced me–we’re making it either Tuesday or Wednesday this week. Can’t wait!

I am so making this recipe tomorrow! Looks amazing!!

Made this for dinner last night – and WOW! It was so good!

I added two little things however … some chili sauce for heat, and bean sprouts on top because i had them in my fridge and they seemed kinda fitting.

It was really tasty! The ginger was perfect in the beef broth – winners all around!

Love soups like this with a fragrant broth—oh the ginger~

This was fantastic! It really comes close to a soup that my husband and I LOVED in Tai Pei…and I’ve been trying to replicate. The only changes I made: added 4 or 5 cloves of chopped garlic, and I used a few dashes of fish sauce and soy sauce at the tail end of cooking the veggies, and probably more ginger than I was supposed to…but it just smells so good!

Made this last night-it turned out great! I added a bit of water to the stock because somehow it didn’t seem brothy enough for me…or maybe I added too many noodles-either way it was great! I might substitute chicken broth/chicken instead of beef broth/steak next time, and make it more like my all-time favorite pho ga!

Fantastic recipe! Can’t wait to try it out!

This soup looks so healthy and delicious! It’s perfect for a mid-week meal. Love the flavors too!

Such a wonderful post by ever so talented Dara! I’m a huge fan of noodle soups with Asian flavors! Yum!

A little squirt of Sriracha hot sauce on this gorgeous beef soup will do it for me! What a great looking recipe, Mary Helen. And you make it look so easy, Dara!

What a beautiful nutrient-rich recipe. I make a Jewish chicken noodle soup almost every weekend, but I just may mix it up this weekend with this one. It looks marvelous.

Whenever I have a cold (or any ailment at all, for that matter), I go right for the Pho. But I’ve never tried to make my own! Next time I will!

this seriously made me drool! delicious.

Love it, will be making this yummy meal for my husband tonight.

Thanks so much for featuring my recipe. I am thrilled that you enjoyed it so much! @Laura I know you aren’t “supposed” to freeze soup, but I am guilty of that very often, and this one froze surprisingly well. Adding the beef, noodles and herbs fresh after defrosting it is a great idea. It won’t taste exactly like it does when you make the whole thing fresh, but it still tastes good, and is perfect for a quick lunch or a last minute dinner.

Oh, gosh this looks heavenly! I can’t wait to give it a try and also add it to my quickly growing arsenal of new dinner recipes. Thanks for sharing!

Thanks for everyone’s kind comments. The real credit, of course, goes to Mary Helen for this wonderful recipe.

TrishR – Thanks for pointing that out. Darn it, I hate when I miss a step. The second half of the onions should be added with the bok choy.

Mmmmm…this will be added to the menu very soon!!

Just a note – in the step-by-step above, you don’t mention what to do with the second half of the onion. I found it in the original recipe of course, but just thought I’d point it out in case you wanted to add it.

Will try this one….

So… do you still have that beautiful Japanese bowl?

Does anyone know if the broth portion of this, sans beef and scallions/basil, would freeze well?

Mmmm! I Love this idea, and think I might play around with it a bit. I recently blogged about a great Asian inspired potsticker soup that I made, which follows a lot of the same ideas here, but ups the savory a bit with some ingredients from my local asian store. I like this idea with beef, and am inspired to go check out what kind of noodles my Asian market has in stock.

Thanks for all of your comments. The real credit goes to Mary Helen for this wonderful recipe.

Lately I keep seeing recipes on TK that makes me change my whole dinner plan for the week! Even though I’m already defrosting gnocchi for dinner, I’m puttin’ ‘em back in the freezer and getting ingredients to make this!

Thanks for making dinner exciting!

I love baby bok choy and mushrooms! So easy and satisfying… comfort food all the way!
– Brittany

This look so so good! Perfect timing too! I’ve been craving Pho since a few days

This looks like the perfect comfort food for me – yummy!

Wow – with my throat feeling sore this would be phenomenal! I just made Asian last week – Chicken and Broccoli.

We love it here! I’ll be trying this one eventually, unless I can get my mom to make it for me before!

This soup looks incredibly delicious. I may be brave enough to try it this week!

i love how so many asian soups are brothy (is brothy a word? i think not…) and comforting. this one sounds amazing…i love that it’s beef! so flavorful

That looks delicious! I reminds me of ramen-shop ramen – I will have to try it soon since it is much simpler than the recipe I have now.