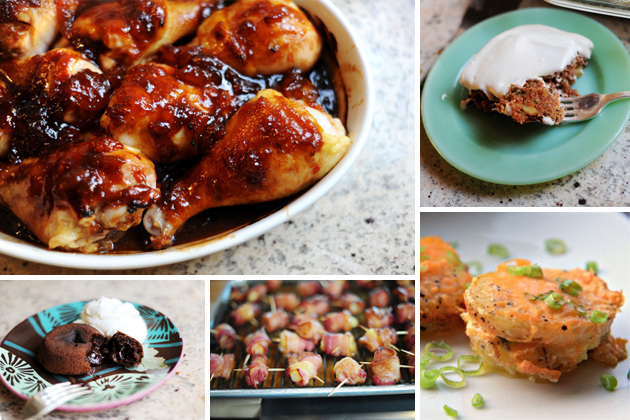 (Cue my preppy Casey Kasem radio voice.) It’s the Tasty Kitchen Top 40! Okay, maybe give or take a couple. Or 12.

This week, we’ll be doing something a little different than our usual theme posts. Since all the ratings and reviews have been reset after our latest wonderful and important change, we thought we’d do a quick rundown of the most popular and top-rated recipes before the reset. It’ll hopefully help remind you of some of the wonderful recipes that you’ve rated before, and give you a chance to go back in and give them the props they deserve.

These are in no particular order, and are simply the recipes that were the most-rated and the highest rated B.C. (that’s Before the Change). Of course, some have gotten a nice bump because they were mentioned over at Ree’s little cooking blog. Those are the ones you see in the top image . But we’ve got lots more. And you know, looking through the list is like getting a neat little snapshot of the kinds of dishes y’all have been loving the most. It’s quite revealing, actually. I even considered trying to draw some CSI-type of profile based on the entries, but I was too distracted by the yummy-looking photos. So I had some chocolate truffles instead.

I thought the best way to do this recipe countdown would be to divide them up by food groups. In other words, appetizers, dessert, sides, soup, main courses, and breakfast.

(Clearly, I need to go back and take another health class.)

Let’s start with appetizers. I was surprised to find two entries that were both little ham sandwiches. Which I interpret as a sign that you like delicious and cute food. Just look at the yumminess overload below. 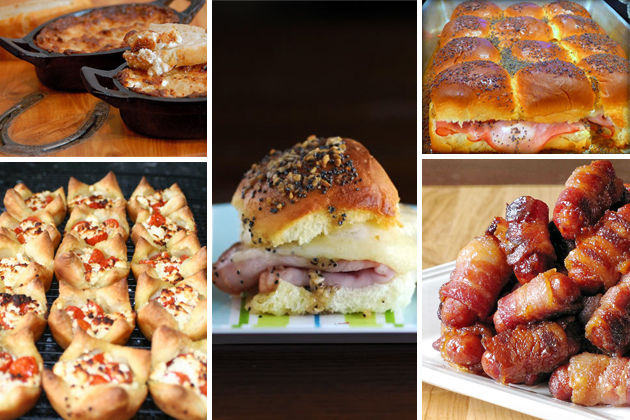 On the left, from top to bottom: Baked Sweet Onion Dip from whiteonricecouple and Tapenade Tarts/Pesto Tarts from lshanahan. Center: Oven Ham Sammies from dineanddish. On the right, from top to bottom: Mini Ham and Swiss Party Rolls from tidymom and Bacon-Wrapped Li’l Smokies in a Brown Sugar and Maple Glaze from Cooking Ventures.

It also appears that you like breakfast food, particularly pancakes and French toast. The three recipes below were also in the top-rated list. 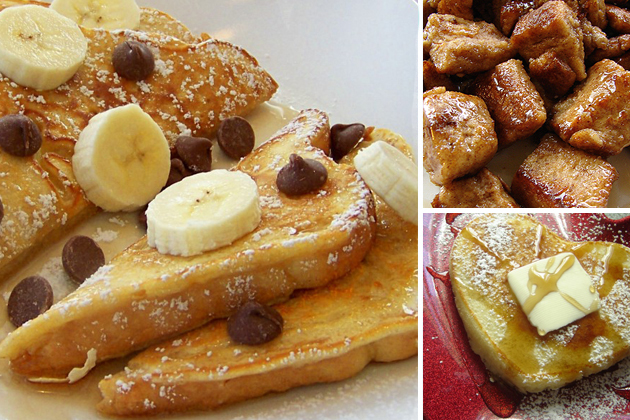 Soups were big, too. Hearty, rib-sticking soups that could be the star of a meal. There were five of them that you liked best. 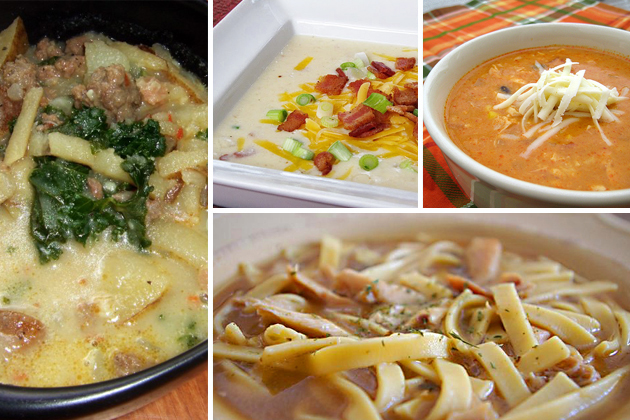 For main courses, the diversity of your tastes showed, with top picks that had influences from Asian, Italian, and good ol’ American cuisines. (There was also a very highly rated Slow Cooker French Dip from Megan that’s simply delicious and ridiculously easy. It’s not in the collage because it had no photo, but that didn’t stop more than 25 members from giving it an average rating of 4.89 mitts.) 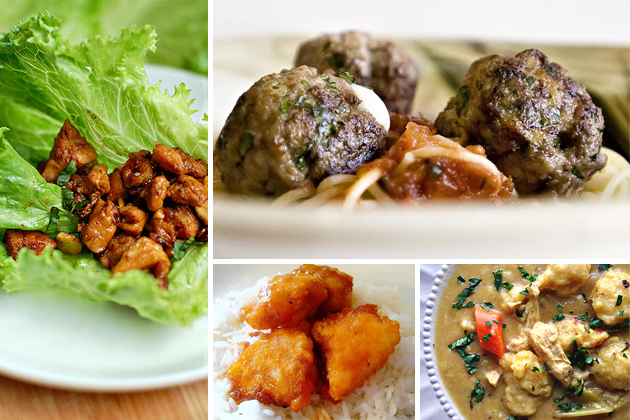 We also had a few recipes for sides that made it to the list, and one for a steak marinade (Firehall Steak Marinade from themomdept) that works great for chicken, too. 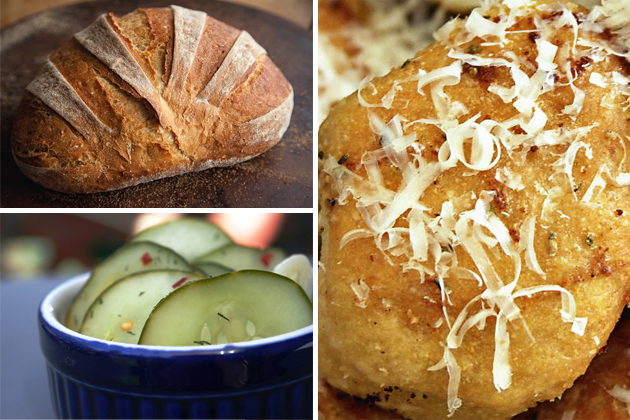 But of course, I wasn’t surprised to see quite a few desserts in the countdown. In fact, maybe the surprise was that they didn’t overwhelmingly dominate the list. Here are the dessert stars. 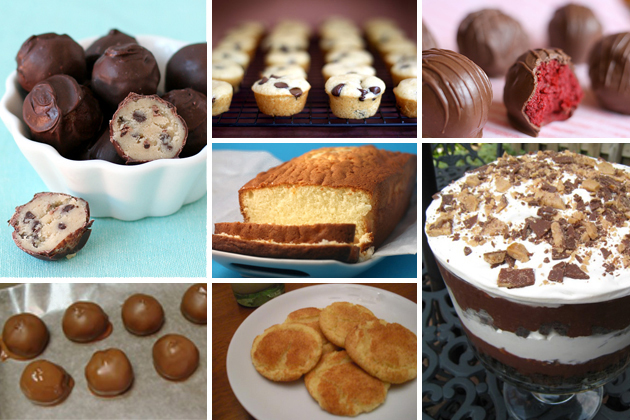 And there you have it! That was our quick rundown of the most-rated and highest-rated recipes B.C. You might notice that I left out the recipes that have been featured here at the Tasty Kitchen Blog, which have all been generously rated as well. If you’ve tried any of those and want to review them, feel free to browse the Tasty Recipe archive and pick them out from there. Each post will always have a link to the original recipe on Tasty Kitchen. I do recommend waiting until after you’ve eaten before going through the archive. It’s a dangerous place for empty tummies.

Do you have any favorite recipes that you know other members have tried and loved? Go ahead and give them a shout-out in the comments below!

Until next time, this is Erika signing off, reminding you to keep your feet on the ground, and keep reaching for the flour.

(If you’re too young to get that reference, I might cry.)

Wow, thanks for compiling the top 40 list… Casey Kasem would be so proud ;). I made the oven ham sammies for my best friend’s baby shower last Fall and they were a huge hit! I think practically every woman there asked for the recipe :). Great job once again Ms Erika!

What a great list. New inspirations! I’m sure it was an oversite, but I think Homemade Oreo Cookies-sorry can’t remember the baker/contributor- should be part of this list!

Thanks so much for compiling this list. I am so grateful that the rating system has changed and look forward to trying out many of these top-rated recipes!

Oh my, so many new recipes I must try. There goes the diet

Thanks Ree for all your hard work.

Apparently not old enough, but the recipes look great.

FUN! Thanks for this, Erika. I’m pleasantly surprised that my garlic bubble bread made the list. I am awfully glad I’m not the only one expanding my girth with these.

There are quite a few here that I have to go add to my recipe box. I’m looking your way, baked sweet onion dip and bacon wrapped little smokies.

Now I’m hungry. I should NEVER read this site until I have a proper meal in hand. Now I have to go eat some pepperoni slices or something…

I’m with you Erica. I would probably get any and all references that you make. You are such a delight to read!! Love your humor and taste in food!!!

I have to brag on this recipe I made for some people this week:

It was SO good the next day …lots of people told me how they want it again! And I do too.

What a wonderful roundup, Erika! I have made any of these, but I’m off to save a few…

hmmm, I’m not old enough to get it…lol! Love all these recipes though, they look delicious!

I wish we could have gotten an extra tab in our recipe box for all our high rated recipes that we’ve tried before the ratings disappeared. I can’t remember all the ones I’ve tried and loved anymore…there were so many!

thanks so much, erica! can’t wait to try this fully loaded baked potato soup.

Oh my goodness, so many tasty recipes to try! Can’t wait : P My favorites from here that I use often are Ree’s Cinnamon rolls and chocolate cake. Bakerella’s Cowgirl Cookies, Bread Machine Pizza Dough by Confessionsofacountrygirl, and Chocolate Chip Skillet Cookie by Mommy’s Kitchen.

I am so happy you posted this. I would like to have “a place to begin” and not spend (too much) time deciding what to make. This gives me inspiration and direction!

I am waiting to post my favorite recipe since it is more “holiday” themed.

Thanks again for the Top 40 Countdown reference too. Yes I am old enough to get it.

Cheryl’s Kicked Up Queso — I’ll volunteer to make it for every get together because it’s amazing!!!

Ree’s comfort meatballs!! Make them just about every Sunday per request from my 9 year old daughter..
she calls them homey meatballs….

The Chocolate Caramel Apples from twofacedchef.com are to die for!

Oooh, Oreo Balls… Makes me think of my wedding. We did a cookie bar for favors, and those are one of my hubby’s family’s absolute favorites. They were the first thing to run out, and his family absolutely gushed over the fact that I made them for the wedding. (I even did a twist with NutterButters and white chocolate… not as good, but not bad either!!)

No list is complete without the recipe for Pernil from The Noshery: https://tastykitchen.com/tasty-kitchen/recipes/main-courses/slow-cooked-puerto-rican-pulled-pork-pernil/

I’ve made it three times now. It’s the new staple meal in my house.

Thank you so much for spotlighting the recipes that had floated to the top before the mittens got reset (and it sounds like the resetting was very necessary). I’m off to check out a bunch of them right now!

(And, sadly, I am nowhere near too young to get the reference at the end. I only hope I can get that Casey Kasem voice out of my head the next time you post!)

Ree’s FIRECRACKER SHRIMP……make it about once a week, every single week…..FANTASTIC and soooooo easy!

And thanks to the wonderful insight and suggestions from Tasty Kitchen users, I was able to tweak the recipes and improve them. Could NOT have done that on my own! (thank you so much!)

Thanks for this round up… you have obviously assembled quite a talented and creative group of chefs!

I love how you started and ended with Casey Kasem.

The sweet and sour chicken from Melanie: https://tastykitchen.com/tasty-kitchen/recipes/main-courses/sweet-and-sour-chicken-3/

This stuff is seriously the best I have ever had. Amazing!