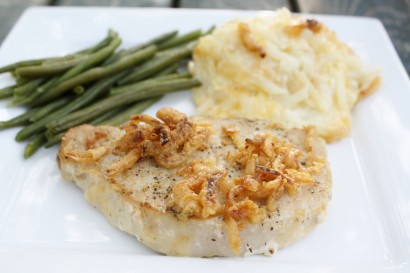 I am all about 1 dish cooking, and this one is sure to please. Comfort food all the way!

Season both sides of the pork chops with salt, pepper, and whatever you like.

In a large skillet over medium high heat, brown pork chops on both sides in the hot oil. Set aside. (You just need them nicely browned on both sides – they will not be cooked all the way and that’s ok, its headed to the oven next.)

In a large bowl, combine sour cream, cream of celery soup and milk. Stir in hash browns, salt, pepper and garlic powder to taste. Then add half of the French fried onions. Spread hash brown mixture in an un-greased 9×13-inch baking dish and sprinkle with cheese. Top with seared pork chops, arranging so that none are on top of each other.

Steam some green beans while this bakes and you have your whole meal just like that! Easy and delicious!

* Do not use too thin of boneless pork chops for this, they will dry out. Bone in would also be a good option.

This recipe is slightly modified from The Country Cook’s site. 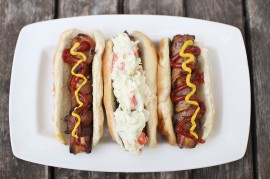 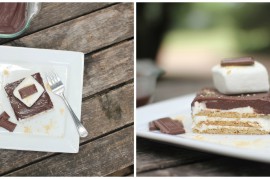 My family enjoyed this. Very yummy!

I made this recipe today. YUM!! This will be a staple in my home. It makes a lot for just me and my Hubby, but will have yummy leftovers tomorrow. Thanks for sharing!

Our members have the best ideas for food gifts. Like this one!
END_OF_DOCUMENT_TOKEN_TO_BE_REPLACED

Put that slow cooker to work and rest easy knowing you have a warm meal waiting for you at the end of the day!
END_OF_DOCUMENT_TOKEN_TO_BE_REPLACED