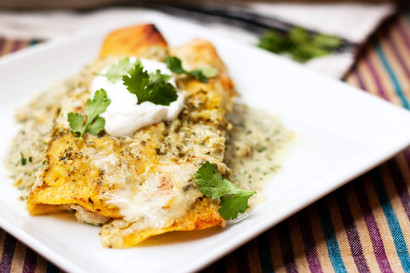 Turn on the oven’s broiler and place an oven rack about 4″ below the broiler. Place the tomatillos and Serranos on a foil-lined baking sheet. Broil, turning occasionally, until blackened or blistered all over. Remove pan from the oven. Let them cool for about 10 minutes, and then remove and discard the skins. Also remove the seeds of the serranos. Put the flesh into a bowl. I got impatient with the tomatillos; they weren’t blackened all over, so I removed as much skin as possible and tossed the rest in.

You also need to roast the Poblano peppers, which you can under the broiler, or on the stove over a gas flame. Place the blackened poblanos in a paper bag or wrap them in foil and allow them to steam for 10-15 minutes. Then remove the skins, stem, and seeds and put the flesh into the bowl as well.

In a blender or food processor, combine the roasted tomatillos, serrano chilies, and poblano peppers with the cilantro, sour cream, cumin, garlic, salt and pepper. Blend until smooth.

Place the cooked, shredded chicken in a medium bowl and toss with 1 cup of the sauce. Coat the bottom of a 9″ x 13″ baking pan with an additional 1 cup of sauce.

In a skillet big enough for the tortillas, heat the oil over medium-high heat. Using tongs, add the tortillas one at a time, cooking until pliable, about 5-10 seconds. Remove the tortillas and place on your workstation while you finish with all of the tortillas.

Divide the chicken between the tortillas, with a strip of the chicken mixture down the center of each. Then roll them up tightly. Place the tortillas, seam side down, in the baking dish. Pour the rest of the sauce on top and cover with cheese. Lots of cheese.

Bake until the sauce is bubbling and the cheese is melted on top, about 18-20 minutes. You can put it under the broiler for 1-2 minutes to brown the cheese at the end. Serve with plenty of sauce, extra cilantro and a little sour cream. Enjoy! 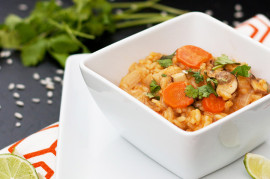 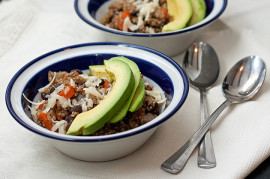 A little spicy, but it’s excellent! It’s even quicker if you use a rotisserie chicken.

made this last night and was sooo awesome!!!
I was skeptic at first after tasting the sauce but after
putting it all together it definitely all came together!!Definite keeper!!!

It may be tough to agree on which movie to watch, but an incredible snack is something everyone will love!
END_OF_DOCUMENT_TOKEN_TO_BE_REPLACED

Here's a quick and easy dish for those busy nights. Be a hero in 30 minutes or less!
END_OF_DOCUMENT_TOKEN_TO_BE_REPLACED