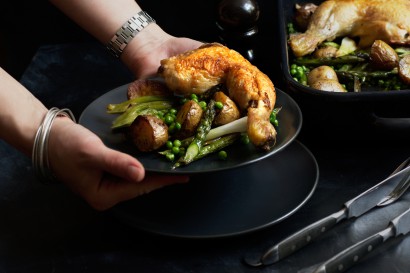 Late spring is a time of great abundance, with tender green veg bursting into life and the warmer weather beginning to ripen fruit bearing plants. Suddenly, we’re less reliant on hardier roots, which makes meals like this possible. Enter a verdant, vegetable-filled, mid-week dinner that’s easy to put together as well as nourishing and tasty. What could be better?

Season your chicken legs with a little salt and begin by browning them in a pan over a medium-high heat. It should take around 8 minutes to get them golden all over.

For the spring onions just chop off the ends and remove any tough outer leaves.

After the potatoes and chicken have been cooking for around 40 minutes, throw in the asparagus and spring onions and the peas 10 minutes later – they take much less time to cook. Try not to lay anything on top of the chicken so that the skin remains crispy, instead dipping the asparagus, spring onions and peas in the chicken juices around the potatoes.

Pop back in the oven for a further 10 minutes, or until you can comfortably push a knife through an asparagus spear.

Rest the chicken for a few minutes while you set the table and serve.

It may be tough to agree on which movie to watch, but an incredible snack is something everyone will love!
END_OF_DOCUMENT_TOKEN_TO_BE_REPLACED

Here's a quick and easy dish for those busy nights. Be a hero in 30 minutes or less!
END_OF_DOCUMENT_TOKEN_TO_BE_REPLACED