Posted by Faith (An Edible Mosaic) in Baking, Step-by-Step Recipes 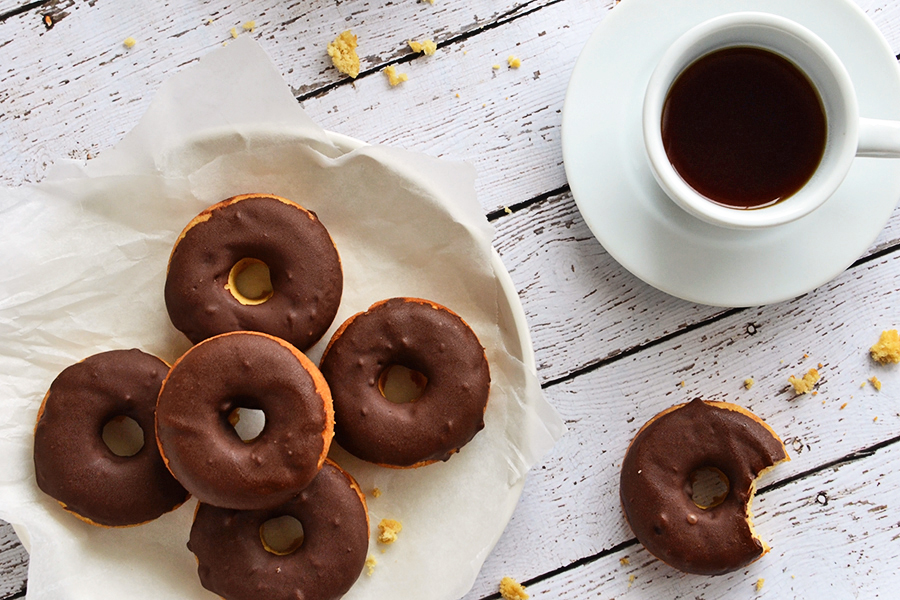 I’ve been dabbling with paleo for about a year now, and one of my favorite things to do is re-make not-so-healthy desserts into healthier paleo versions. Any time I see a paleo treat, I can’t help but take a closer look. When I saw Tasty Kitchen member Traci’s recipe for (Coconut Flour) Cake Donuts, I was immediately interested.

Even if you’re just paleo-curious or getting your feet wet, it doesn’t hurt to try a paleo treat. Let’s start with donuts! 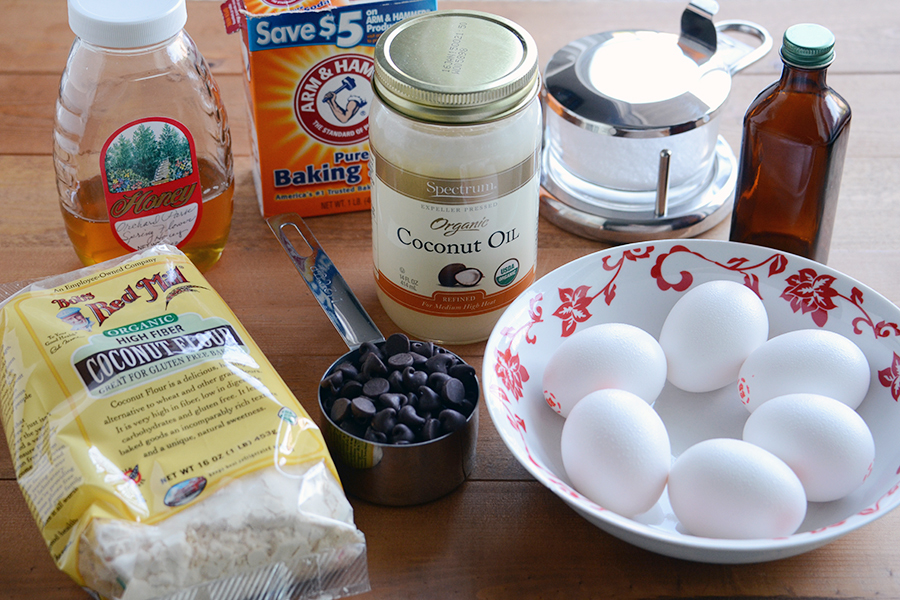 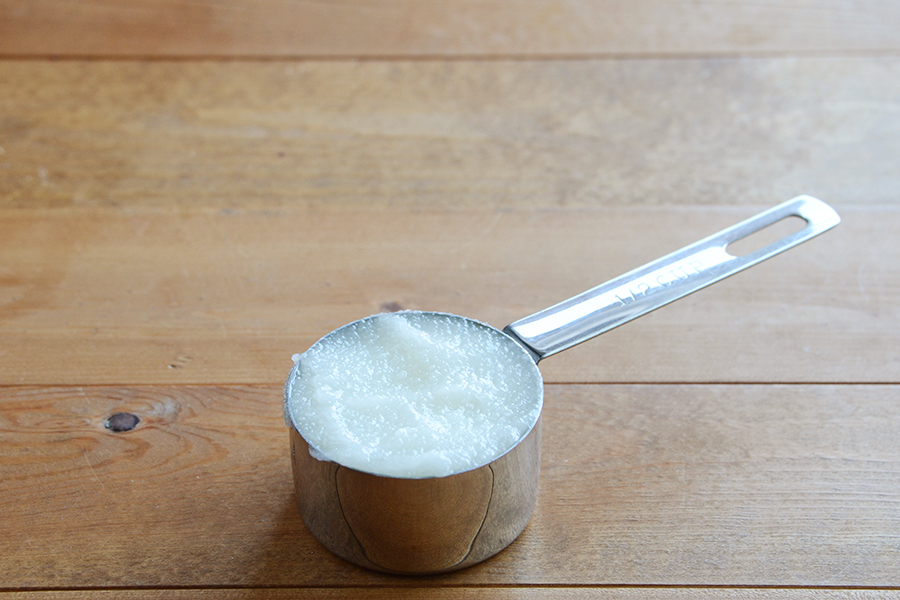 Here’s the coconut oil, pre-melt. (If you’re making these donuts on a hot day, yours might already be melted.) 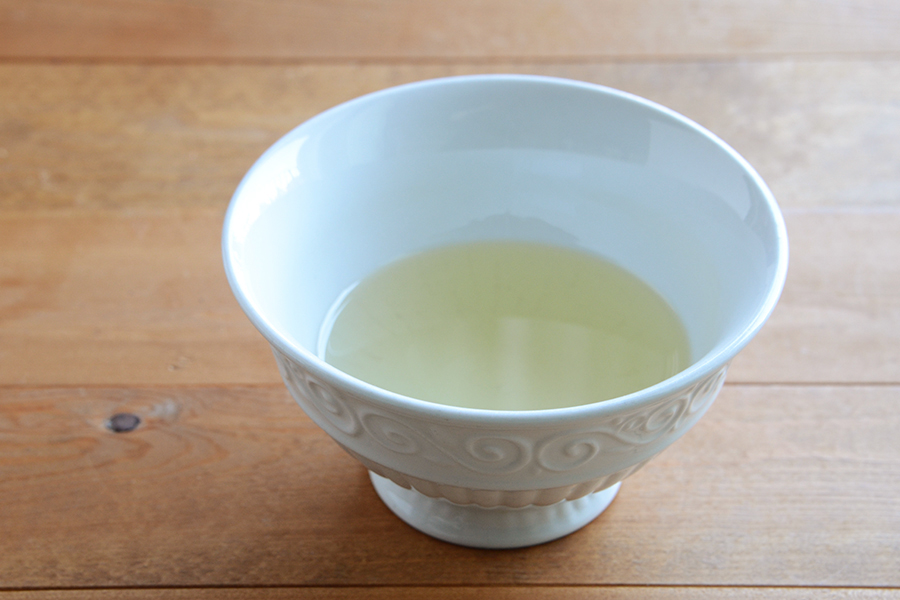 And here it is after melting for a few seconds in the microwave. 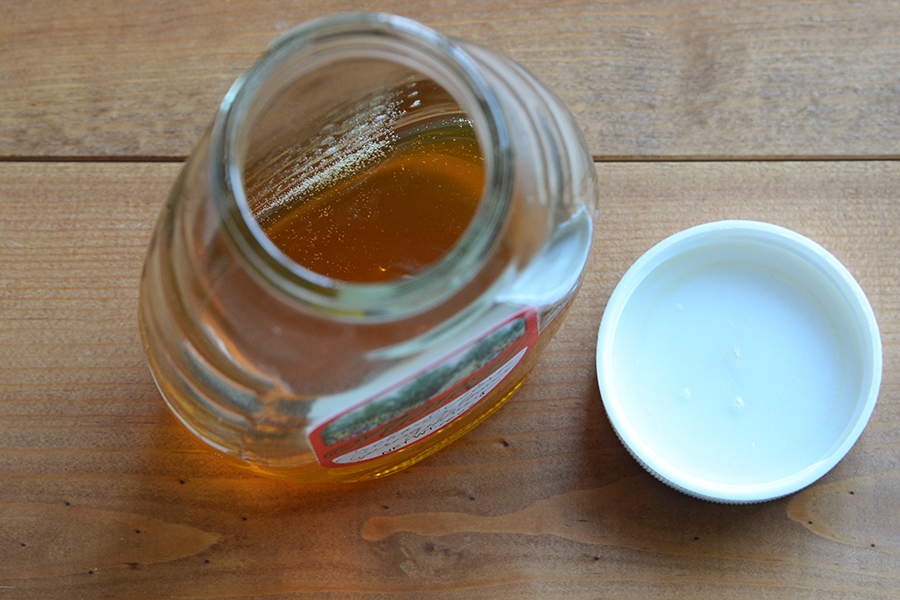 My honey was already in liquid form; if yours isn’t, go ahead and melt it. 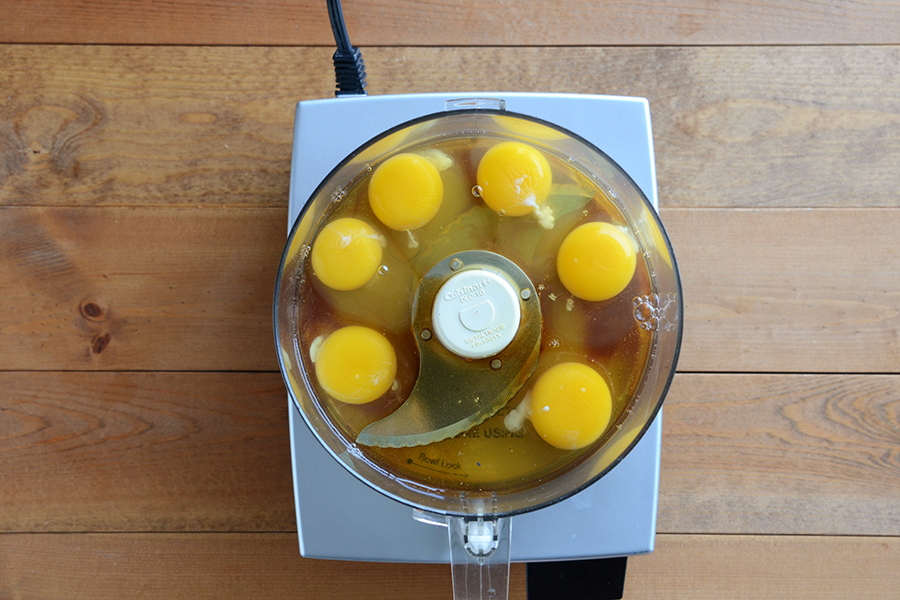 Add the honey and the eggs to a food processor (or blender like I used), and blend them together. 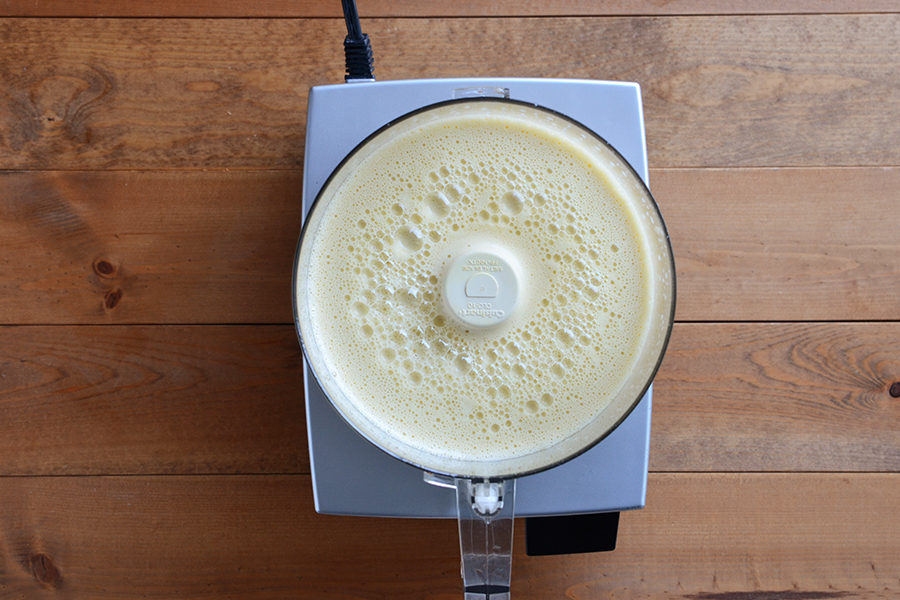 Then process in the melted coconut oil and vanilla. The mixture will be foamy! 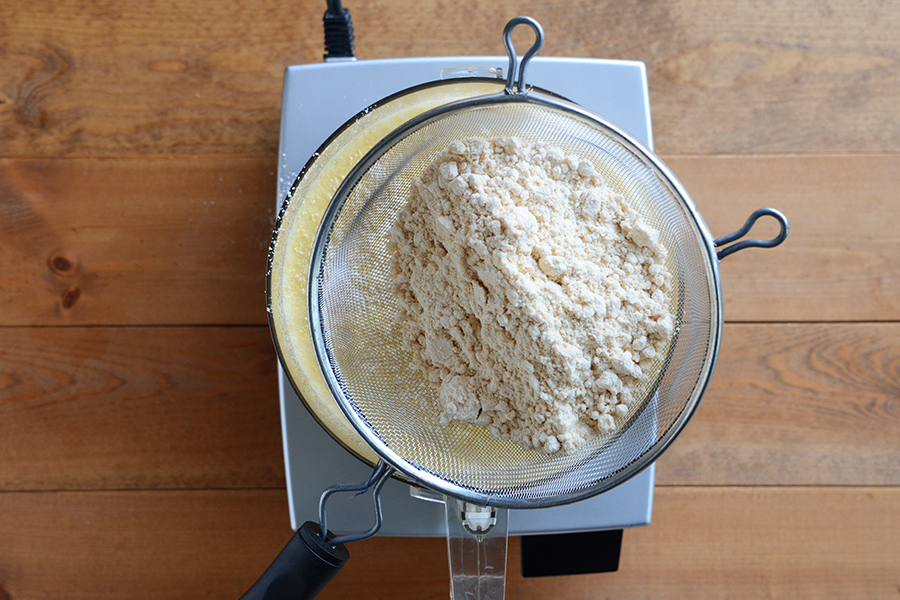 Sift in the coconut flour, baking soda, and salt. I sifted the dry ingredients right into the food processor with the wet ingredients because unlike flours containing gluten, coconut flour can handle the extra mixing. 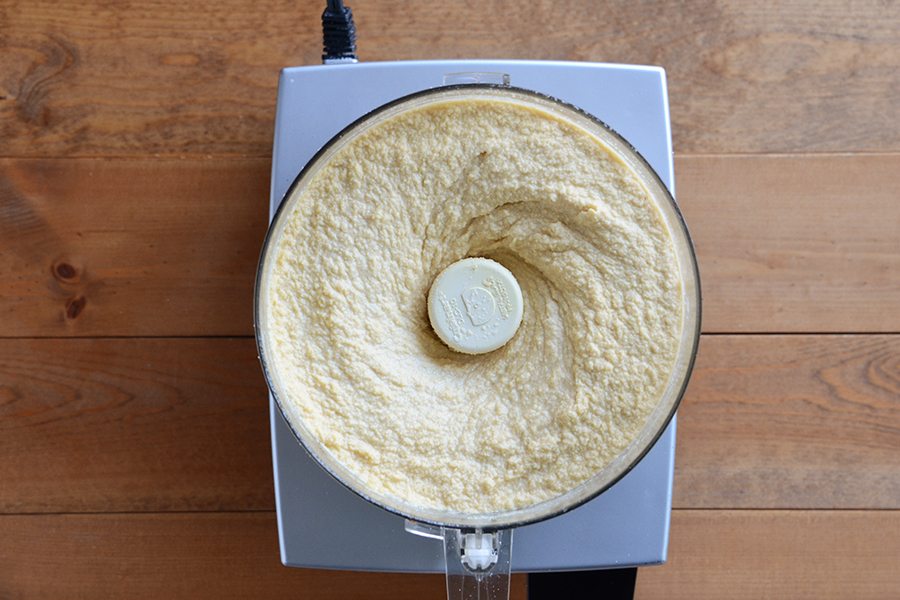 Whiz it all together in the blender or food processor until smooth.

Here’s where a little bit of finesse comes in because coconut flour can be a finicky thing. Coconut flour absorbs quite a bit more moisture than all-purpose flour, so you might be surprised by that if it’s your first time working with coconut flour. Also, coconut flour can vary quite a bit by brand, so depending on the brand you’re using, you might need to add a bit more liquid or flour. Don’t be afraid to play with the batter a little until you get a consistency that works. The batter should be fairly stiff, but still spoonable. And the batter should be able to spread out when you fill the donut tray and tap it on the counter a couple times. 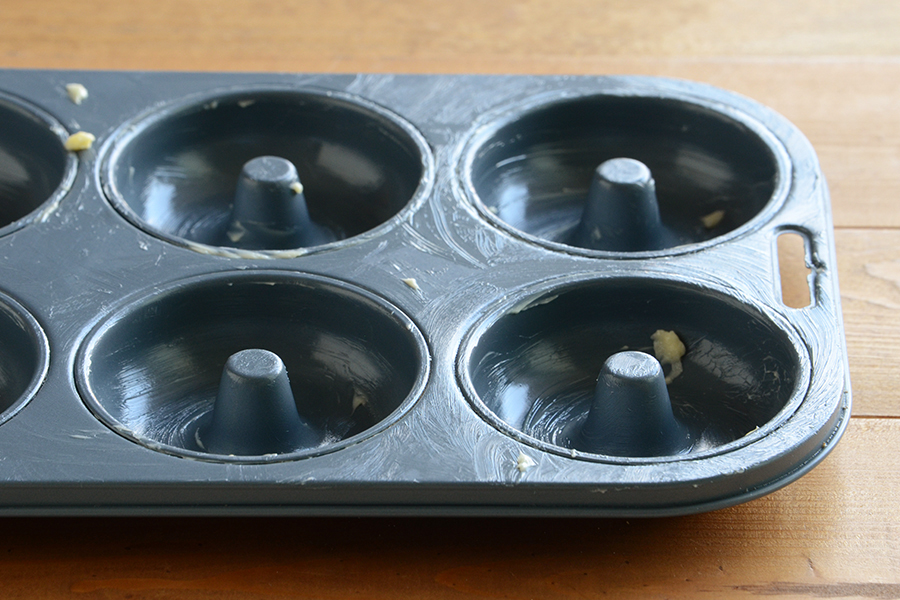 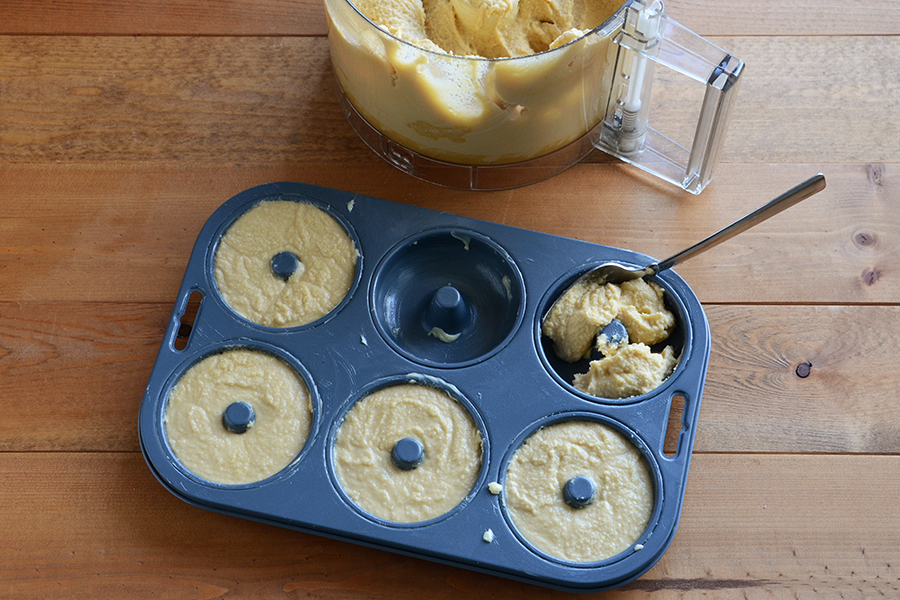 Spoon the batter into the wells and tap the pans on the counter a couple times to even them out. 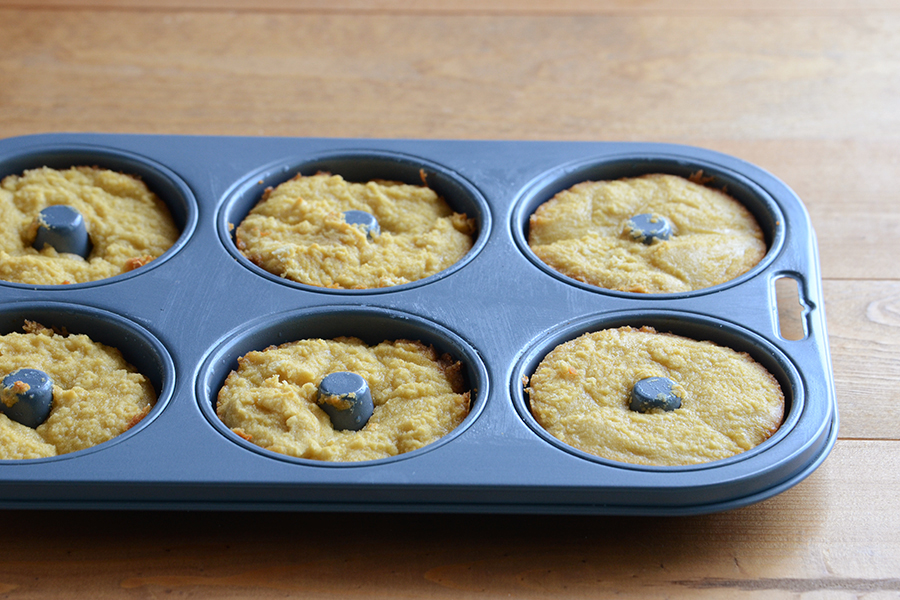 Bake until they’re golden and a toothpick inserted inside comes out clean, about 15 minutes. Let them cool completely in the pan before removing. 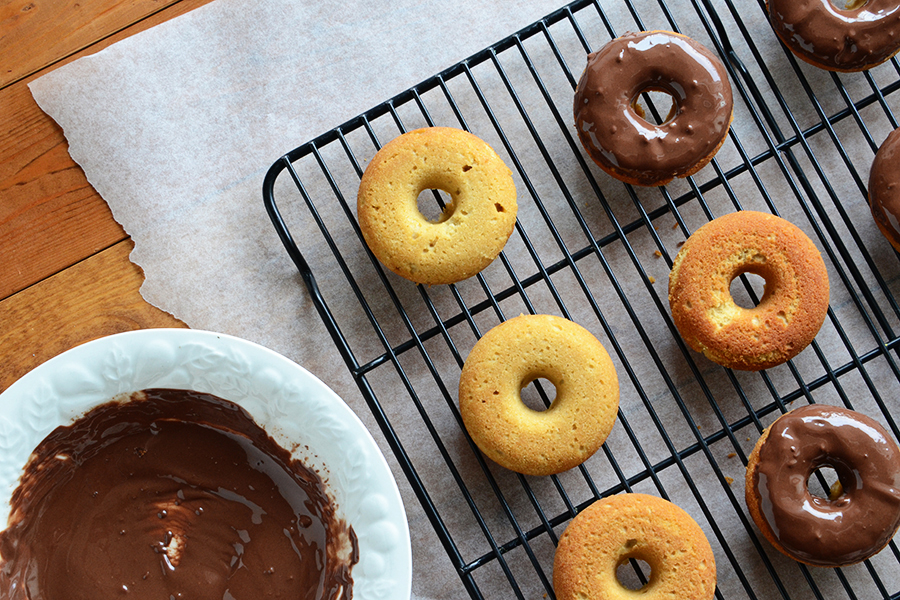 Melt the chocolate chips and 1 tablespoon coconut oil together in a microwave or double boiler. Dip each donut into the chocolate and place it on a wire rack or parchment-lined tray. 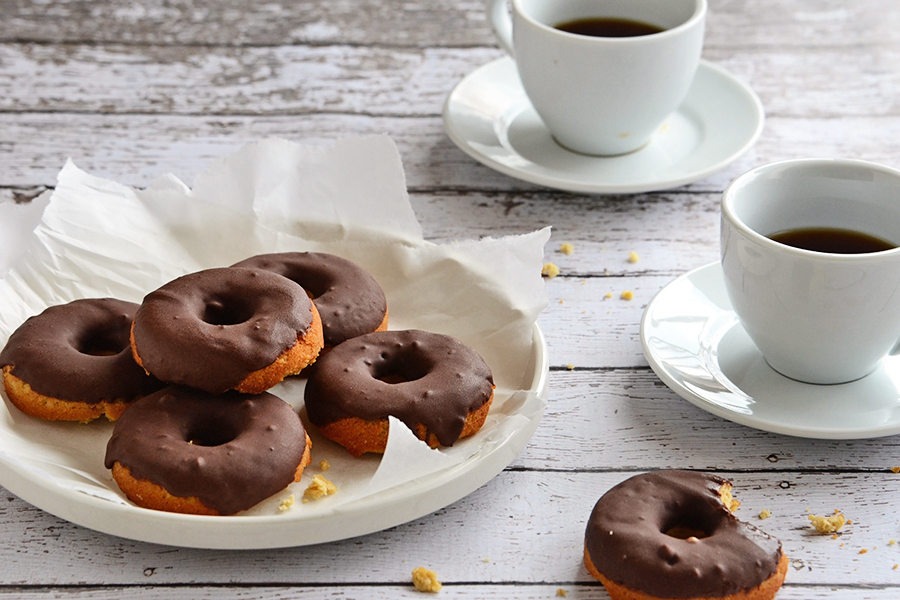 Refrigerate the donuts so the chocolate can harden, and serve! 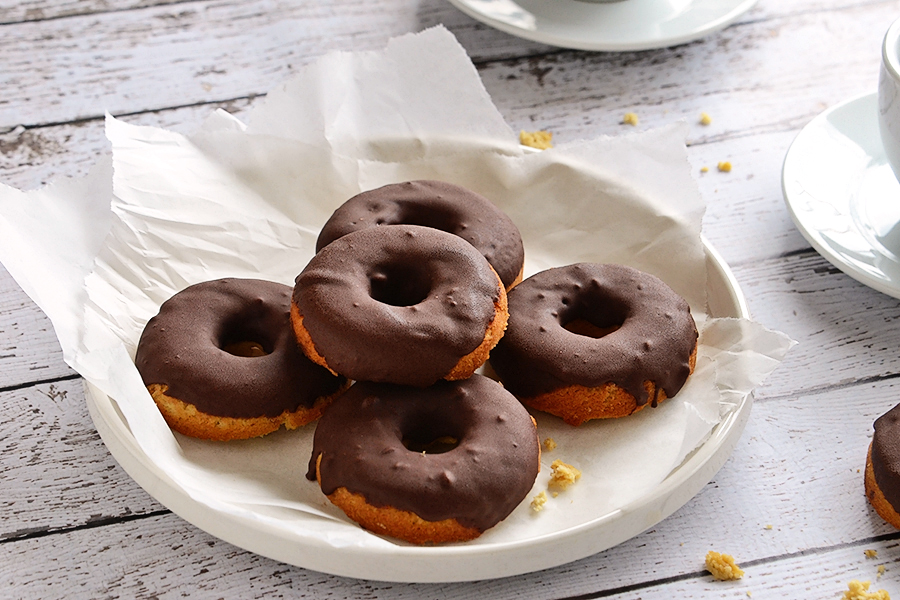 These donuts were absolutely delicious, and of course perfect with a cup of coffee. Texture-wise, they aren’t the same as regular donuts, but given the fact that they’re much healthier, they’re completely worth it. One tip I have is to leave these in the fridge until you’re ready to eat them because the chocolate topping will start to condense and then melt on hot days. The good thing is, they lasted and were completely fine for me for 3 days in the fridge!

Thanks to Traci for her delicious recipe! Head over to her fun blog LottaMaddness for more recipe ideas, as well as life, DIY, travel, and culture tidbits! 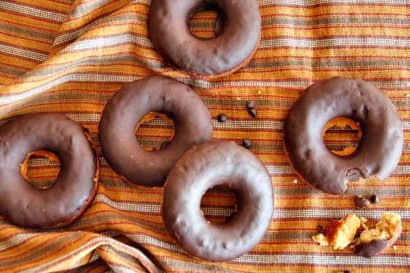 Who says you can’t have your donut and eat it too when you’re on a Paleo diet?

Blend the eggs and honey together in a blender. Add the melted coconut oil and vanilla extract.

Sift the coconut flour, baking soda and salt into the egg mixture and mix until well blended.

Using a dessert spoon, spoon the batter into the circles of a well-greased donut pan. (I used 2 6-circle donut pans.) Bake for 15 minutes or until a toothpick comes out clean. Once cooled, remove donuts from the donut pan.

For the topping, melt the chocolate chips and coconut oil together. Dip each donut into the chocolate and set onto a tray lined with parchment paper. Place donuts into the fridge for the chocolate to harden. Enjoy!

Be forewarned. Coconut flour is so high in fiber that it has a very…. uh… “bean like” effect on the digestion.

Krislea, if anything, the sugar in these would mean that you shouldn’t be eating them for every meal, hence the “Treat” label. But the eggs and coconut oil are more or less staples of the paleo diet and recipes, and to a paleo dieter, are the “dietary polar opposite” of foods that cause cardiovascular disease.

Krislea you might want to do some research on eggs and coconut oil, you will be quite surprised….

Paleo friendly or not, these are still donuts. With the cholesterol from the eggs and saturated fat in coconut oil, this sounds like a recipe for cardiovascular disease. Please be responsible in what you tout as “healthier” options.

Can you tell me the nutritional facts? Calories specificly! Thank you.

oooooh these sound delicious! This is my Saturday morning eats project. Thank you!