One of the many things I love about living in Michigan (besides having a baseball team in the World Series *wink* GO TIGERS!) is the many cider mills. They usually have  hayrides, lots of fresh pressed apple cider, paper bags full of a variety of crisp apples and let’s not forget those freshly fried doughnuts, which are personally my favorite.

Aimee’s recipe for Apple Cider Donuts pretty much has all the above wrapped into one delicious doughnut. See, the apple cider is actually IN the doughnuts and they’re baked, which for some people (meaning me) is a lot less stressful then deep frying. But all this goodness doesn’t just stop there. 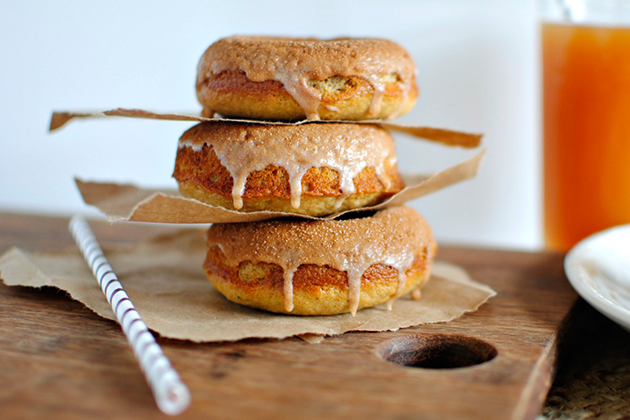 After the doughnuts cool, you dunk them into the most delicious glaze. And even that has cider in it—and it’s beyond amazing. And just when you think you’re done, you’re not. After you dunk the doughnuts in the cider glaze, you dip them in cinnamon sugar. I’m not joking. It gives your teeth a little textural “crunch” before they sink into the soft glaze-dripped doughnut. Oh.My.Word.

Now scroll down and see for yourself. I just hope you have cider on hand because I’m pretty certain you’ll want to make these as soon as possible! 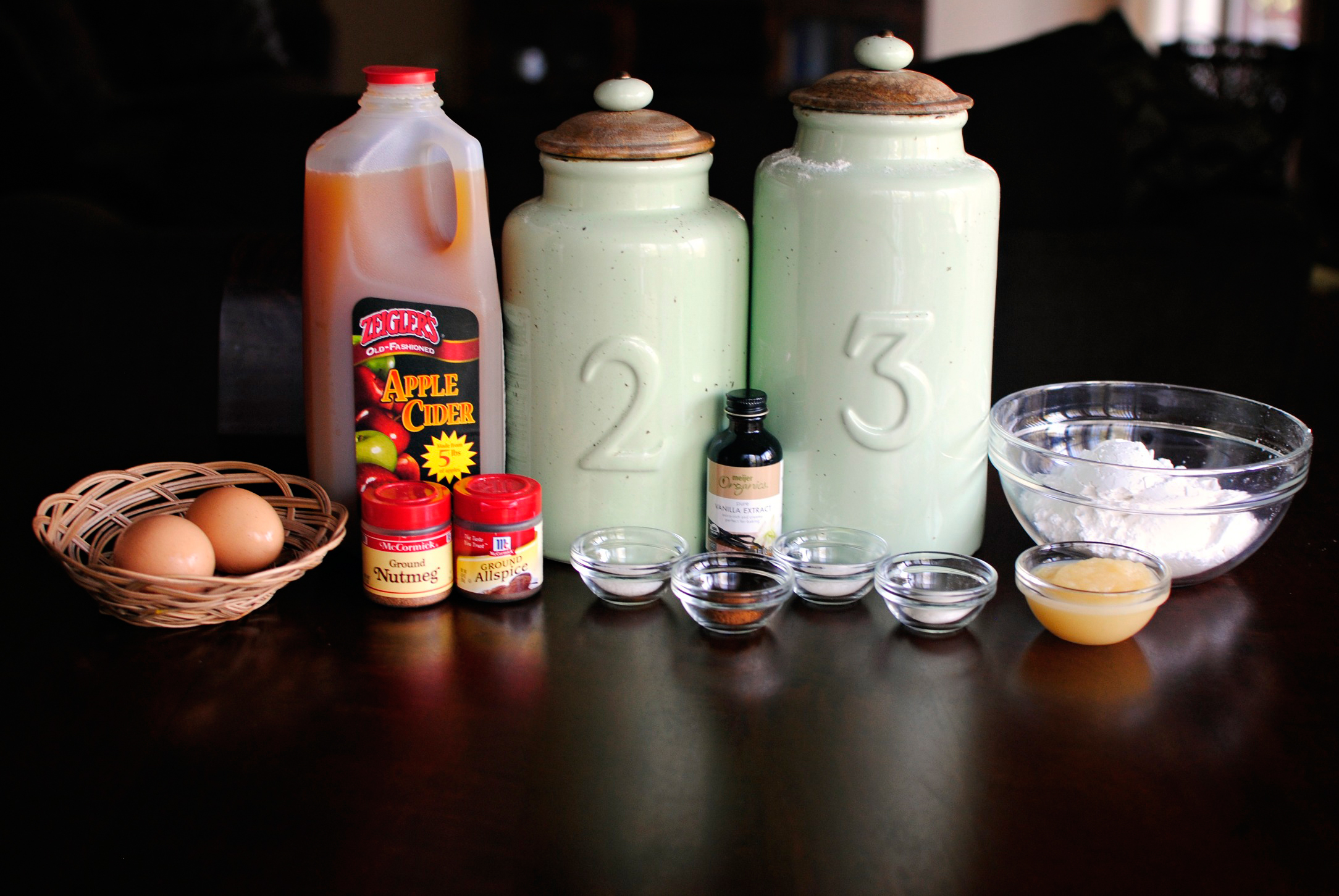 The ingredients are pretty simple and straightforward. Besides picking up the apple cider, I had everything else on hand.

Then measure and add in nutmeg and allspice, then ground cinnamon. This right here smells amazing already! 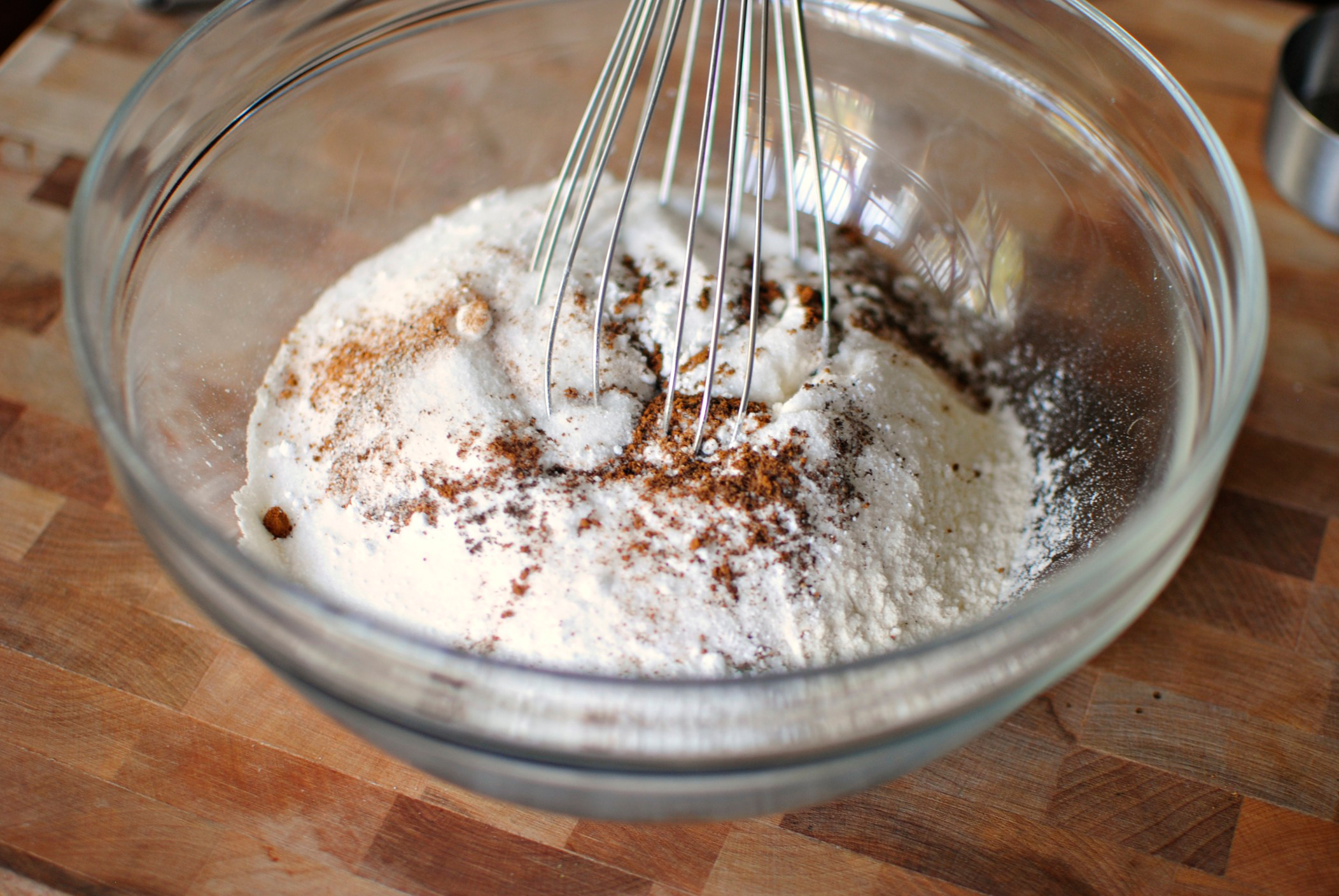 Give it a good whisk or stir to break up any lumps and so everything is blended. Scoot that off to the side for just a moment. 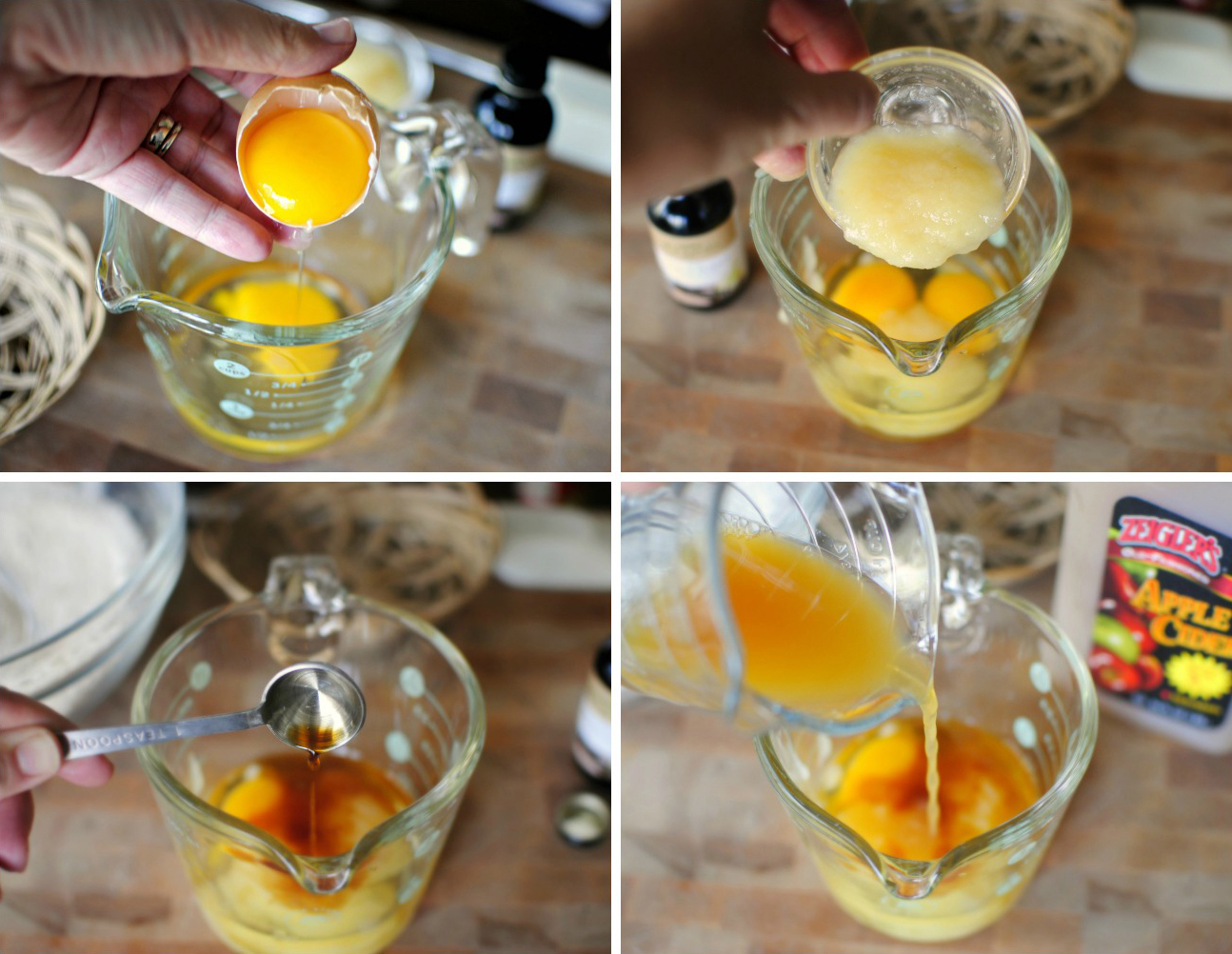 You could do the next step directly in the same bowl and not bother dirtying another bowl, but I couldn’t help myself. Combine eggs, applesauce (I used unsweetened), real vanilla extract and then pour in the apple cider. 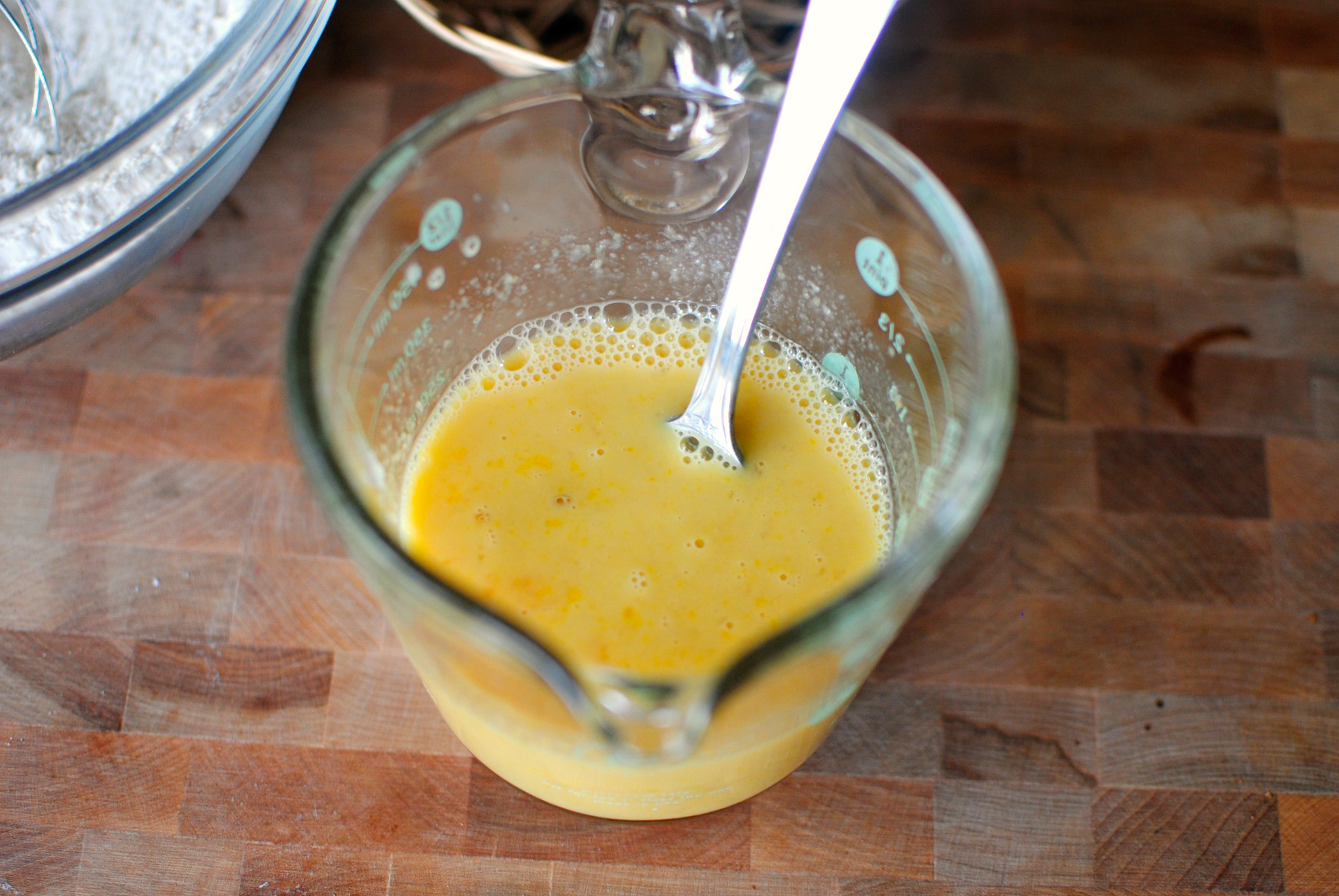 I combined all these ingredients by using a fork just until the eggs were whipped. 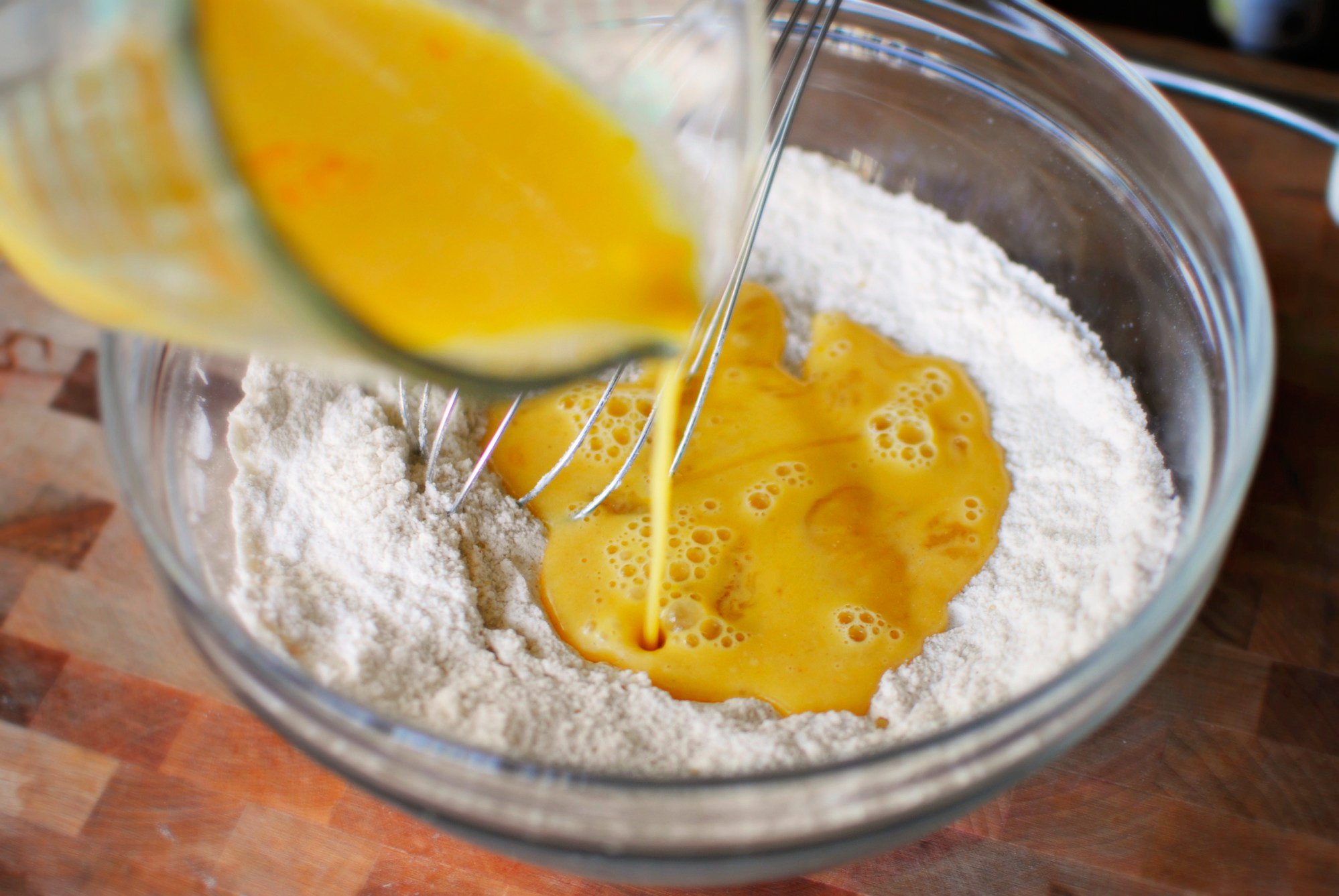 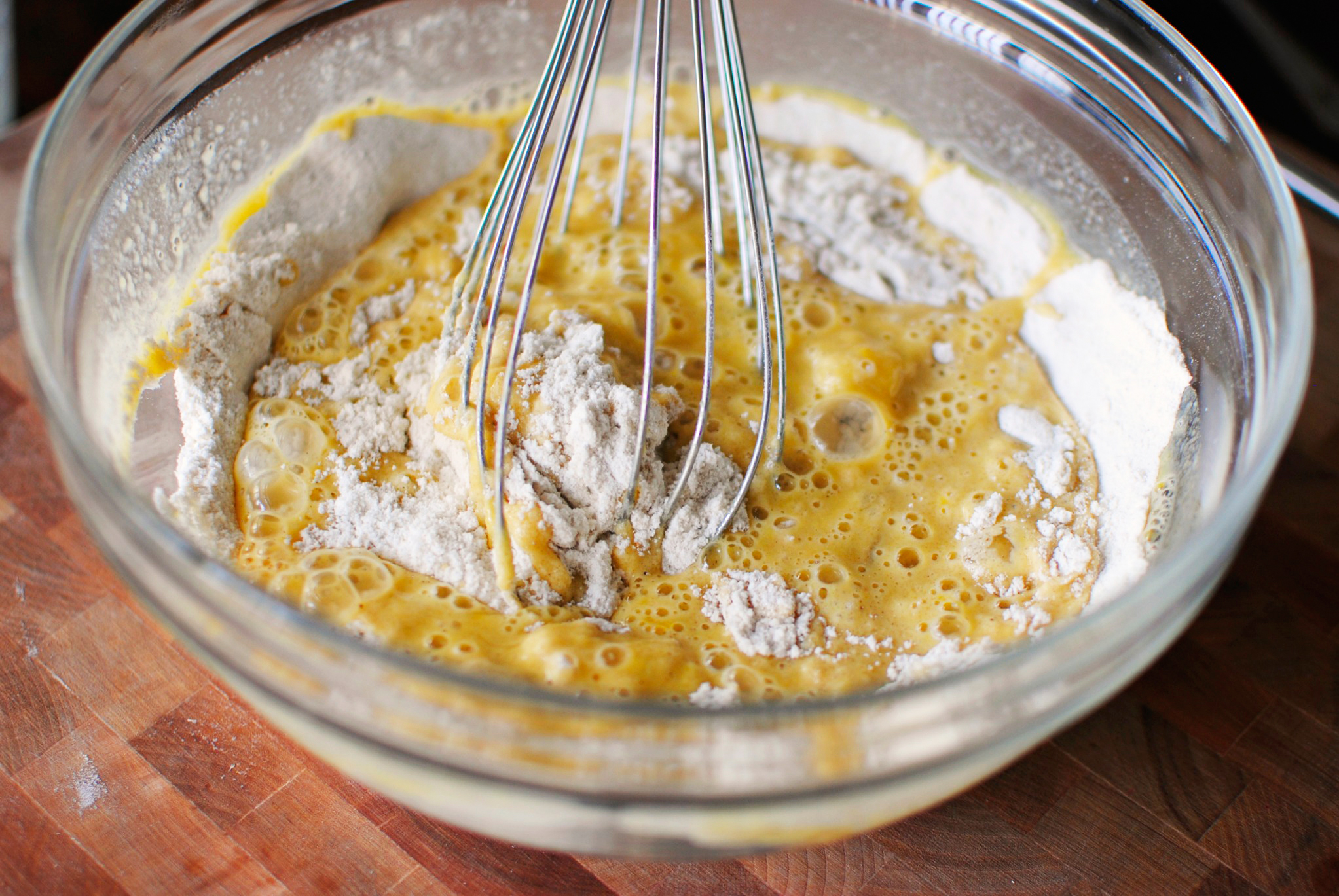 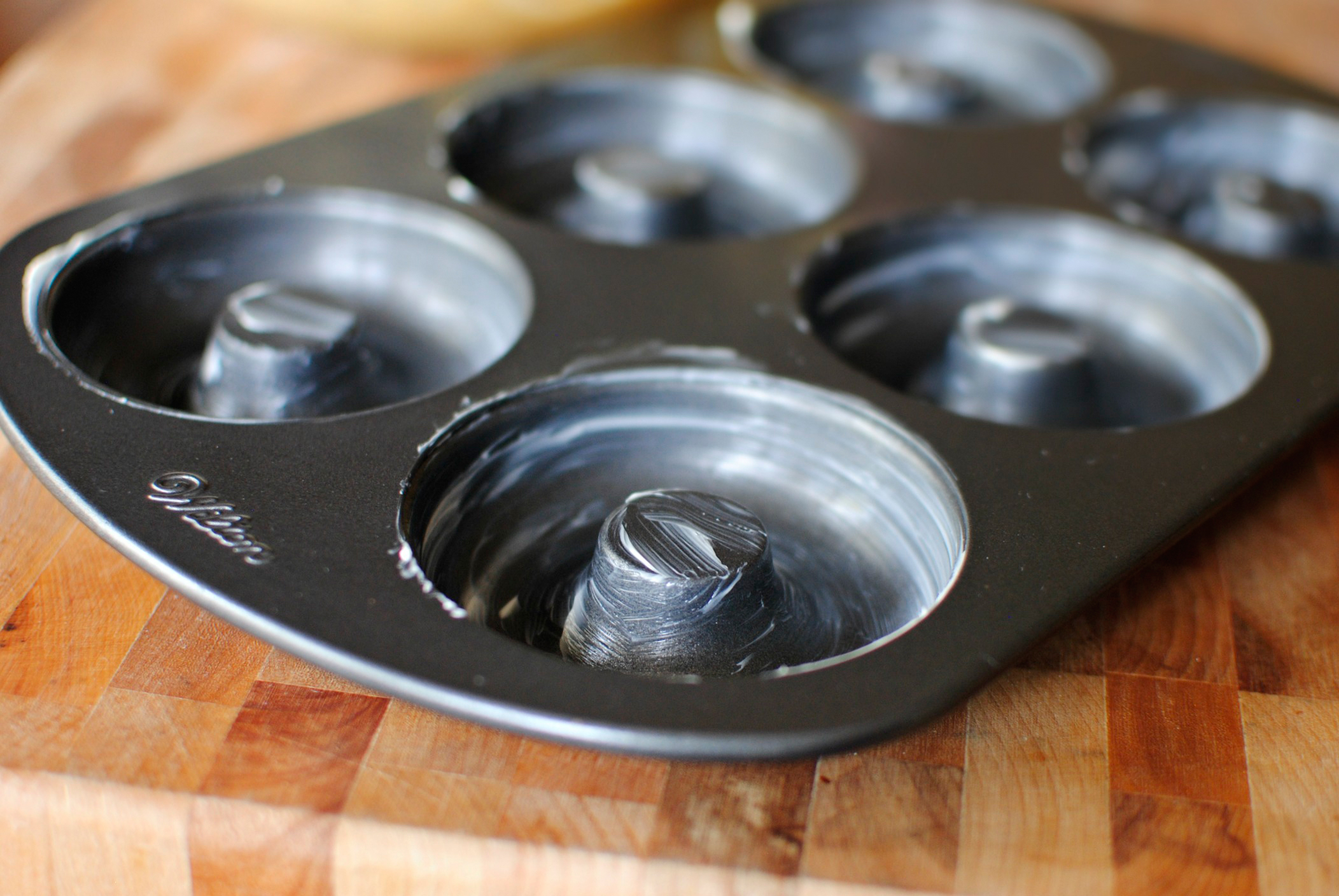 I quickly and heavily buttered my doughnut pan, so I didn’t risk these doughnuts sticking. 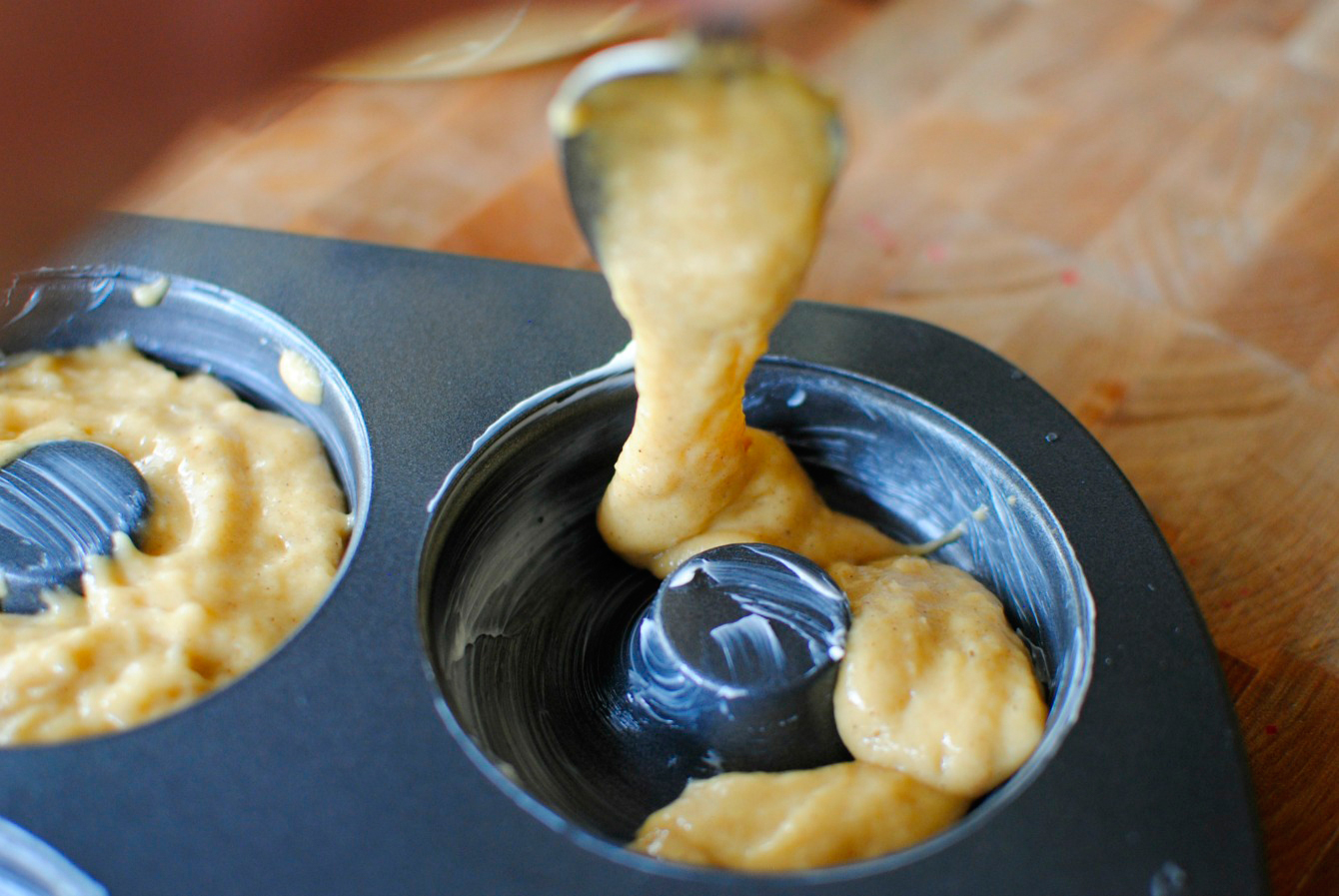 Then I used a spoon and filled each doughnut section. 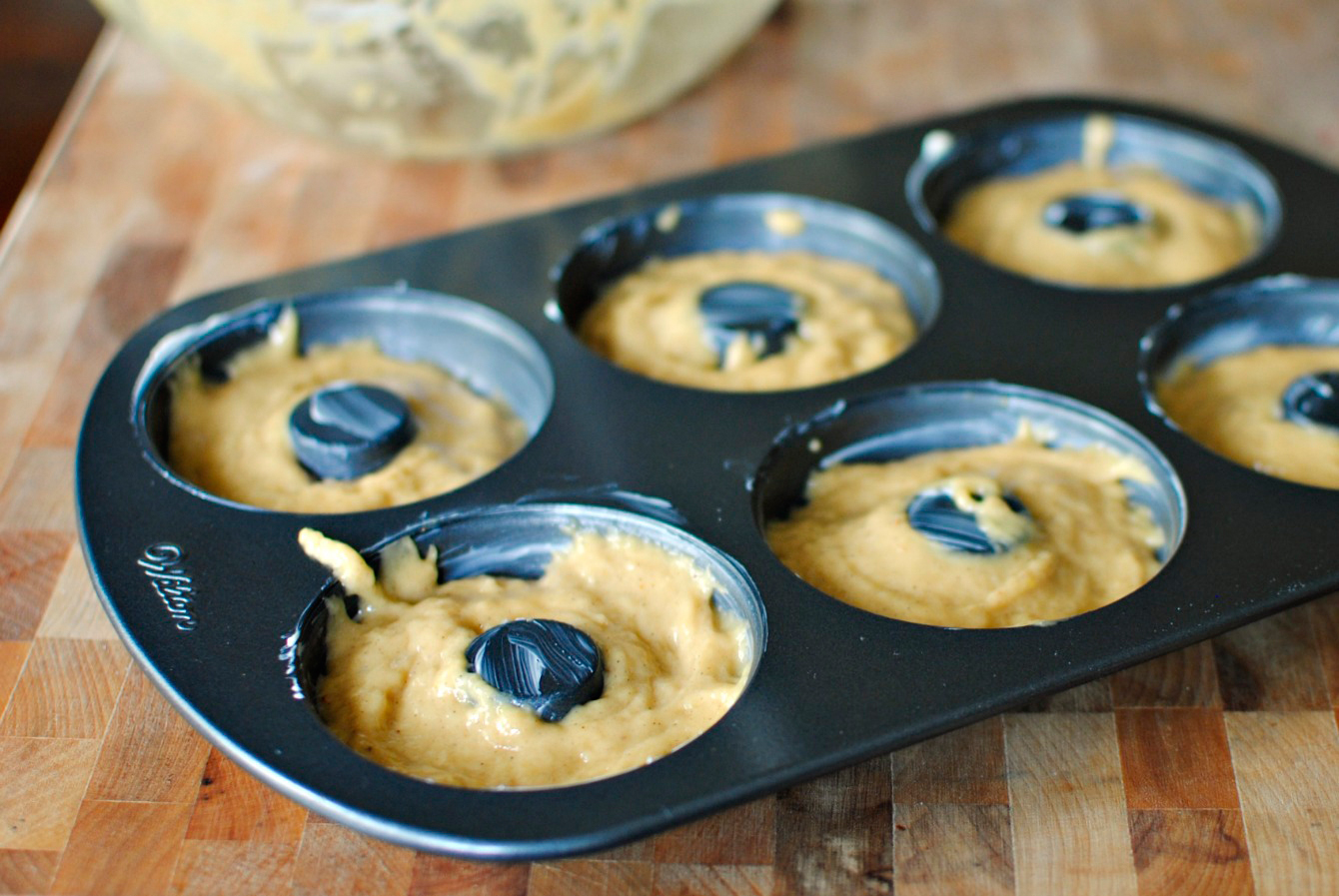 As you can see I’m not the neatest. But I didn’t have a large re-sealable bag on hand to pipe in the batter like Aimee suggested. To be honest, that would be a whole lot easier (and cleaner), but spooning it in worked too. Now just bake in a preheated 325ºF oven for 10  minutes. I rotated the pan halfway to ensure even baking. 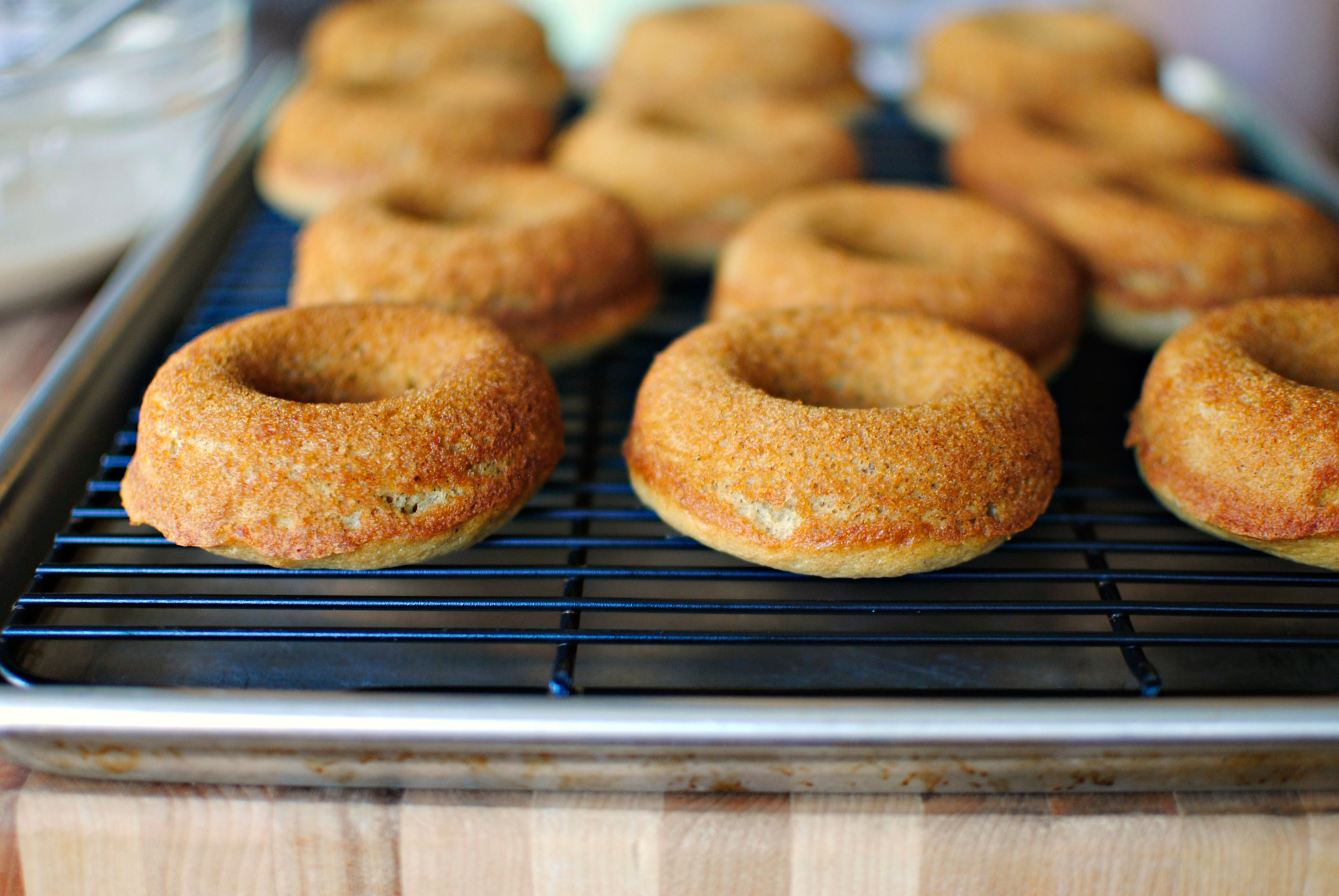 I let the doughnuts cool in the pan for about 10 minutes before carefully removing them from the pan. I used a rubber spatula and they came out wonderfully. I then let them cool for a bit and moved on to making the cinnamon sugar and the cider glaze. 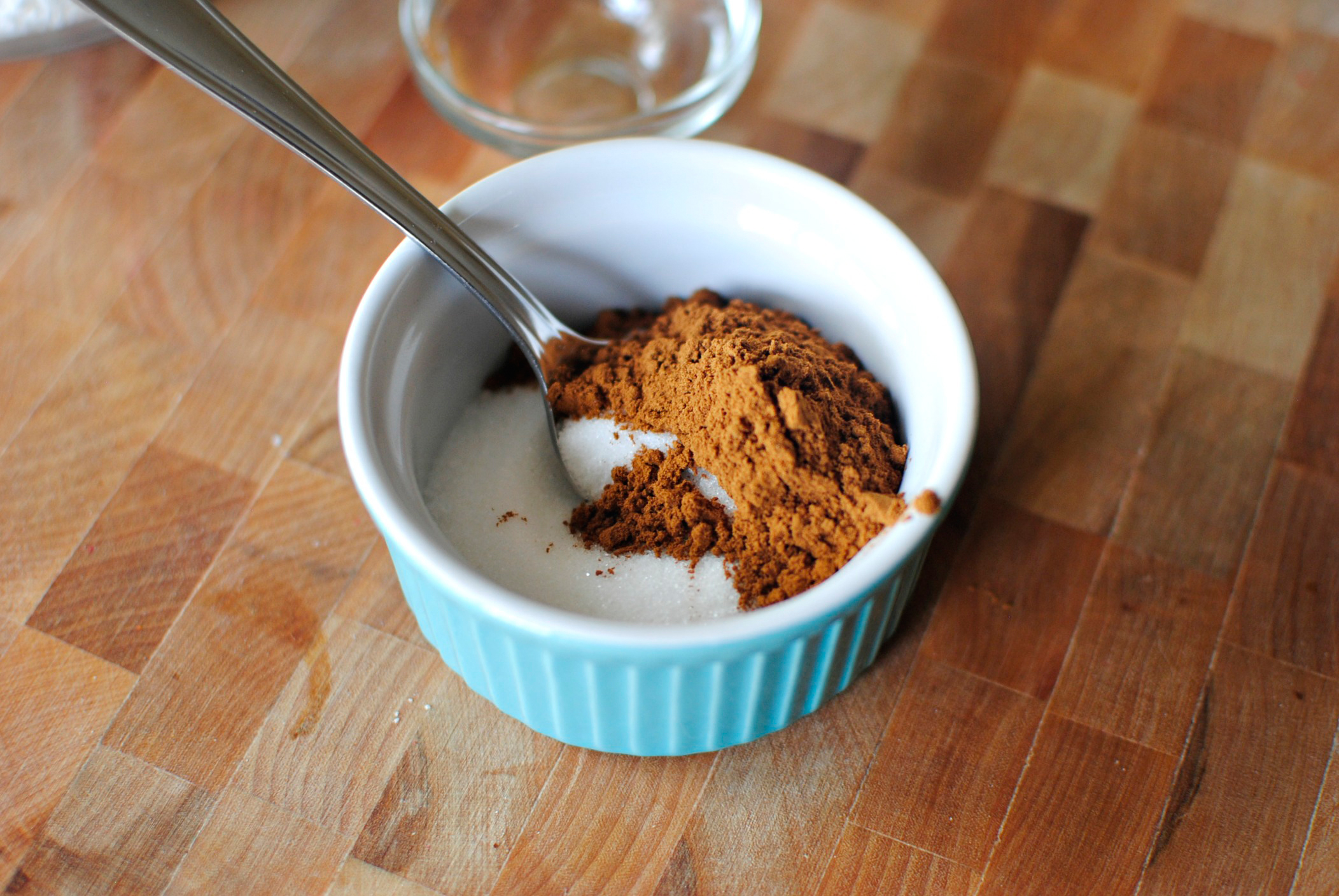 Combine a tablespoon of cinnamon with sugar. Make sure to use a big enough bowl that a doughnut will fit nicely in for dunking.

To make the glaze, start by measuring out powdered sugar and then pour in the apple cider. The recipe calls for 2 tablespoons of cider, but I needed to thin it out a tad more so I used a total of 3 tablespoons. 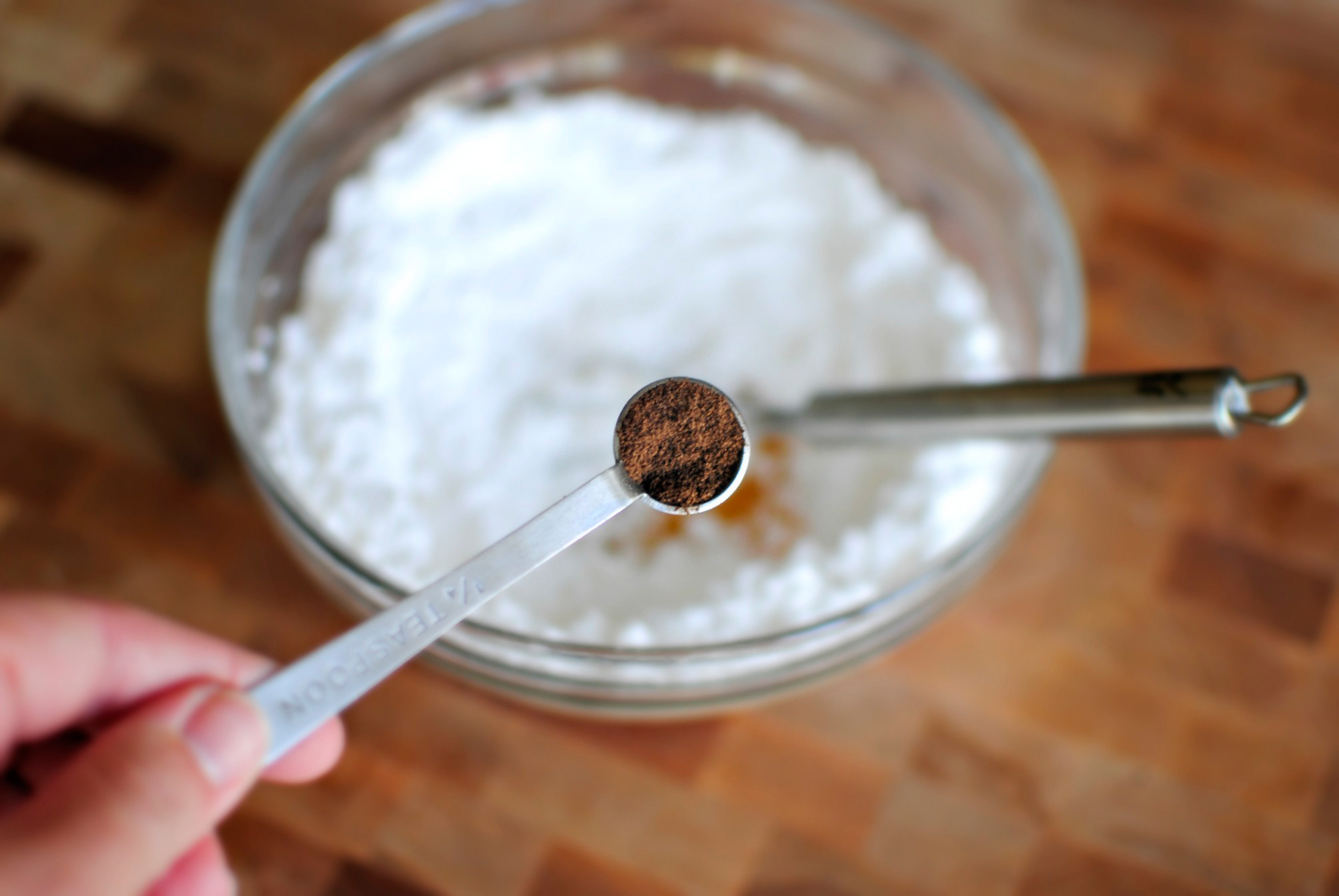 Then add in allspice. 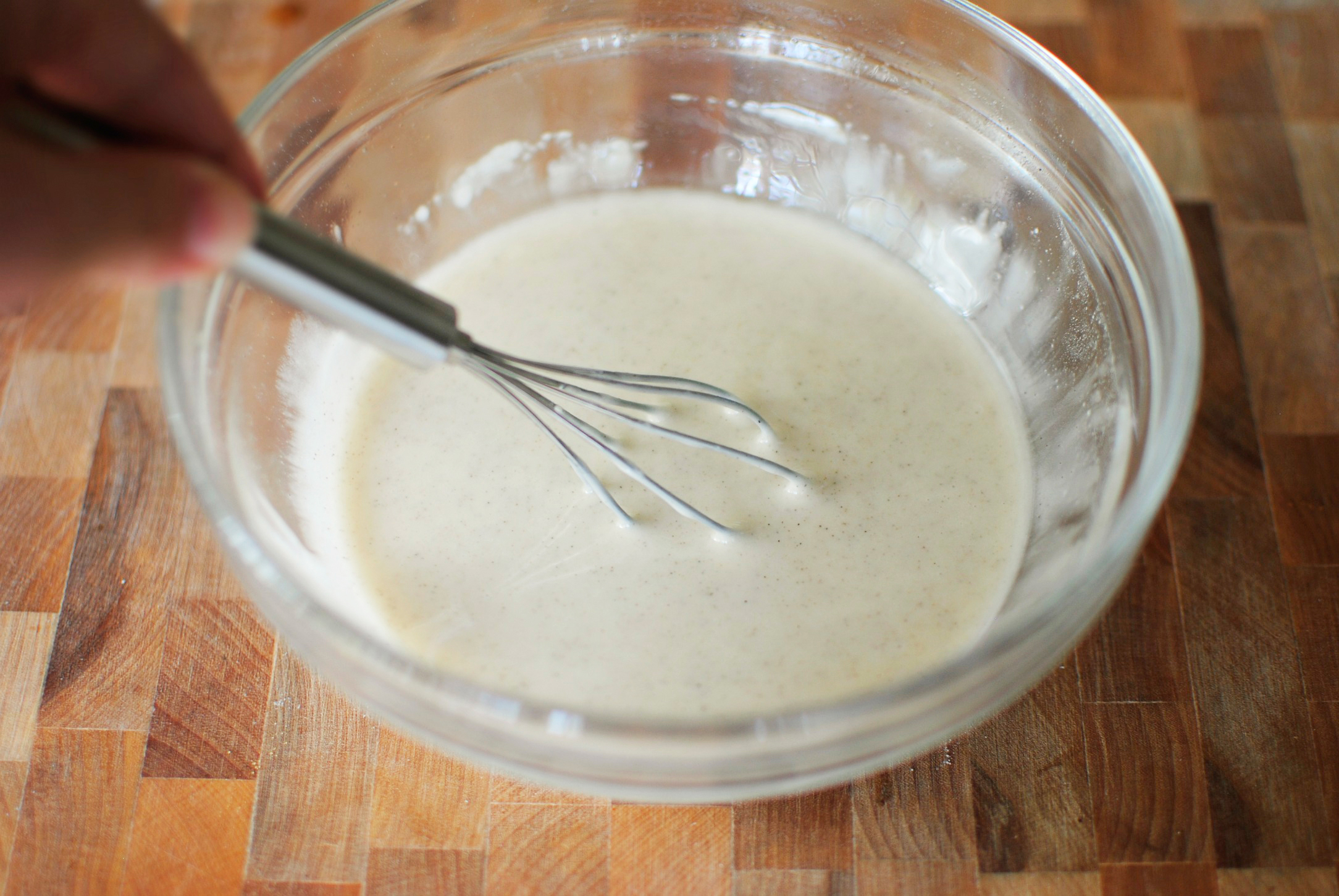 Whisk until completely combined and there are no lumps remaining. 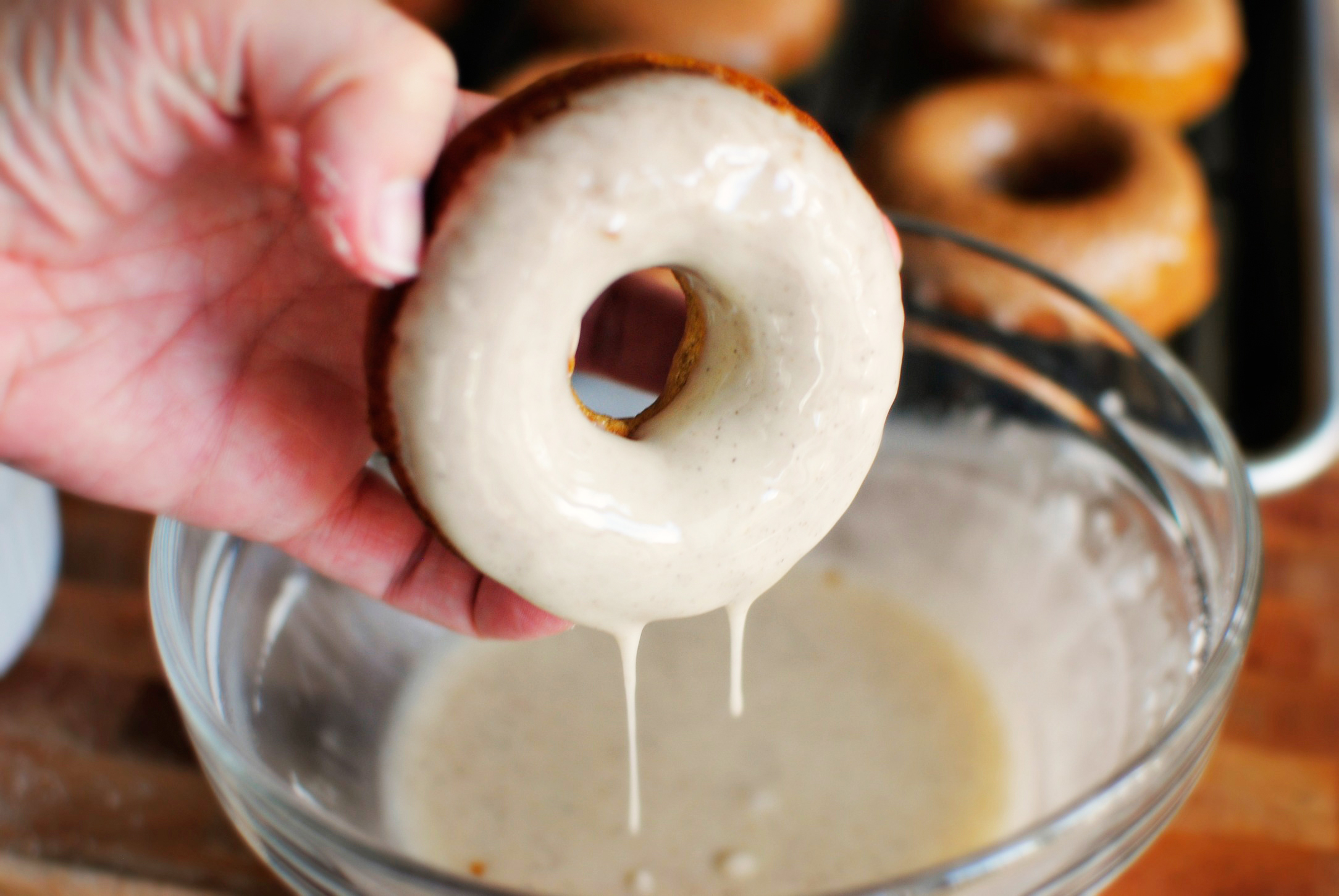 Dunk the doughnuts into the glaze. Ohhh yeah! 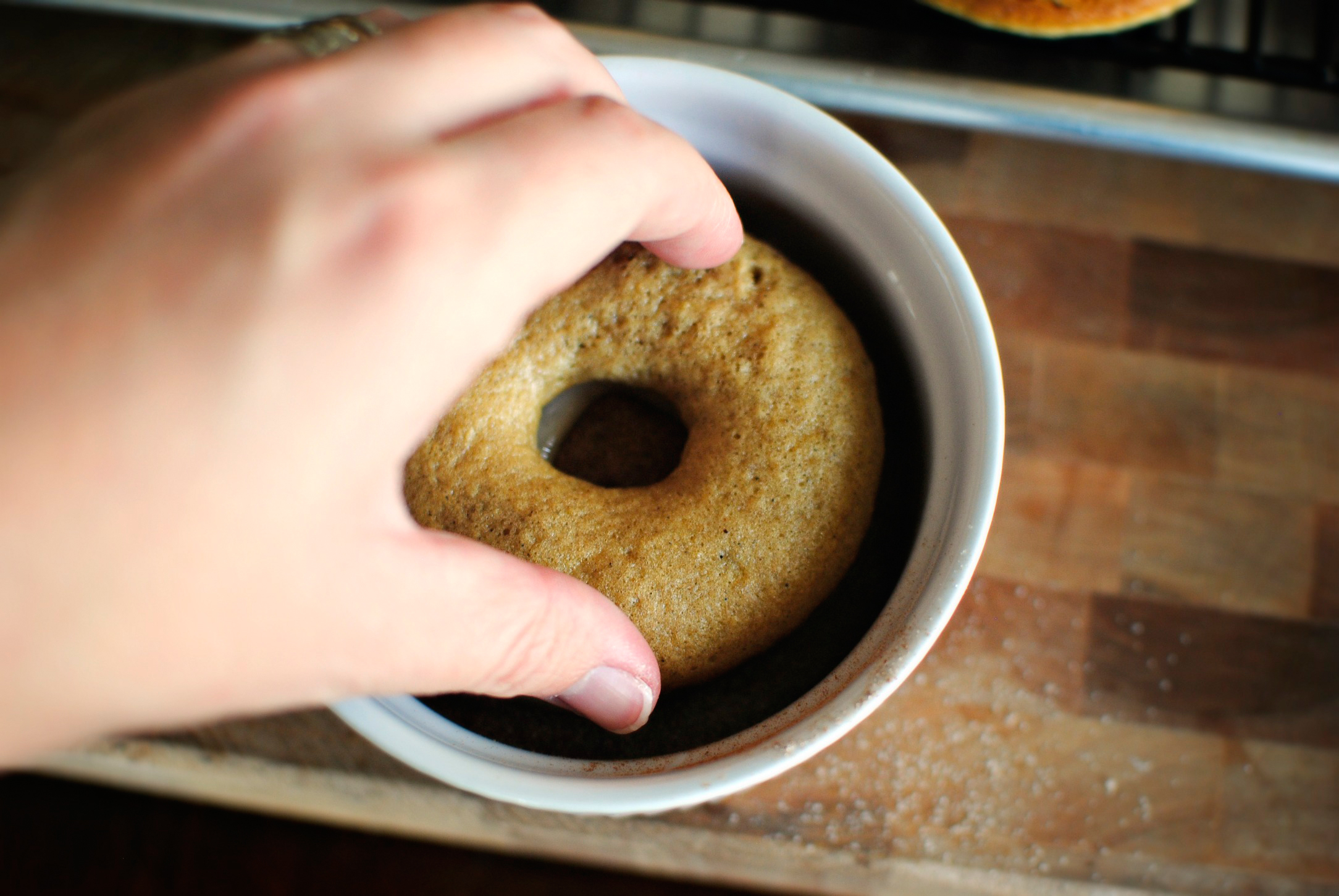 And then immediately dip it into the cinnamon sugar. 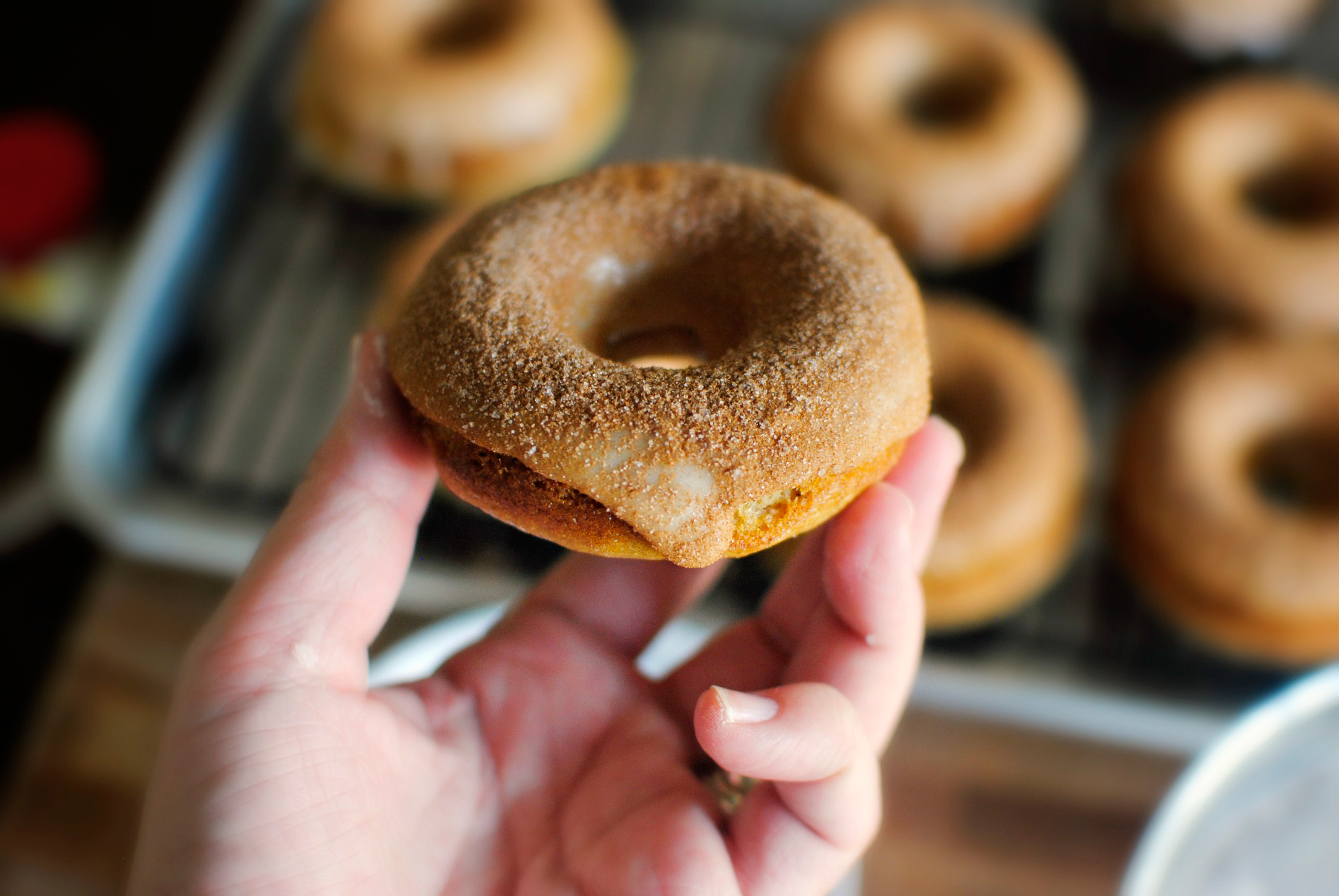 See what I mean? Now just set on a wire rack set over a sheet pan or paper towels so the glaze has a place to drip and repeat with the rest. 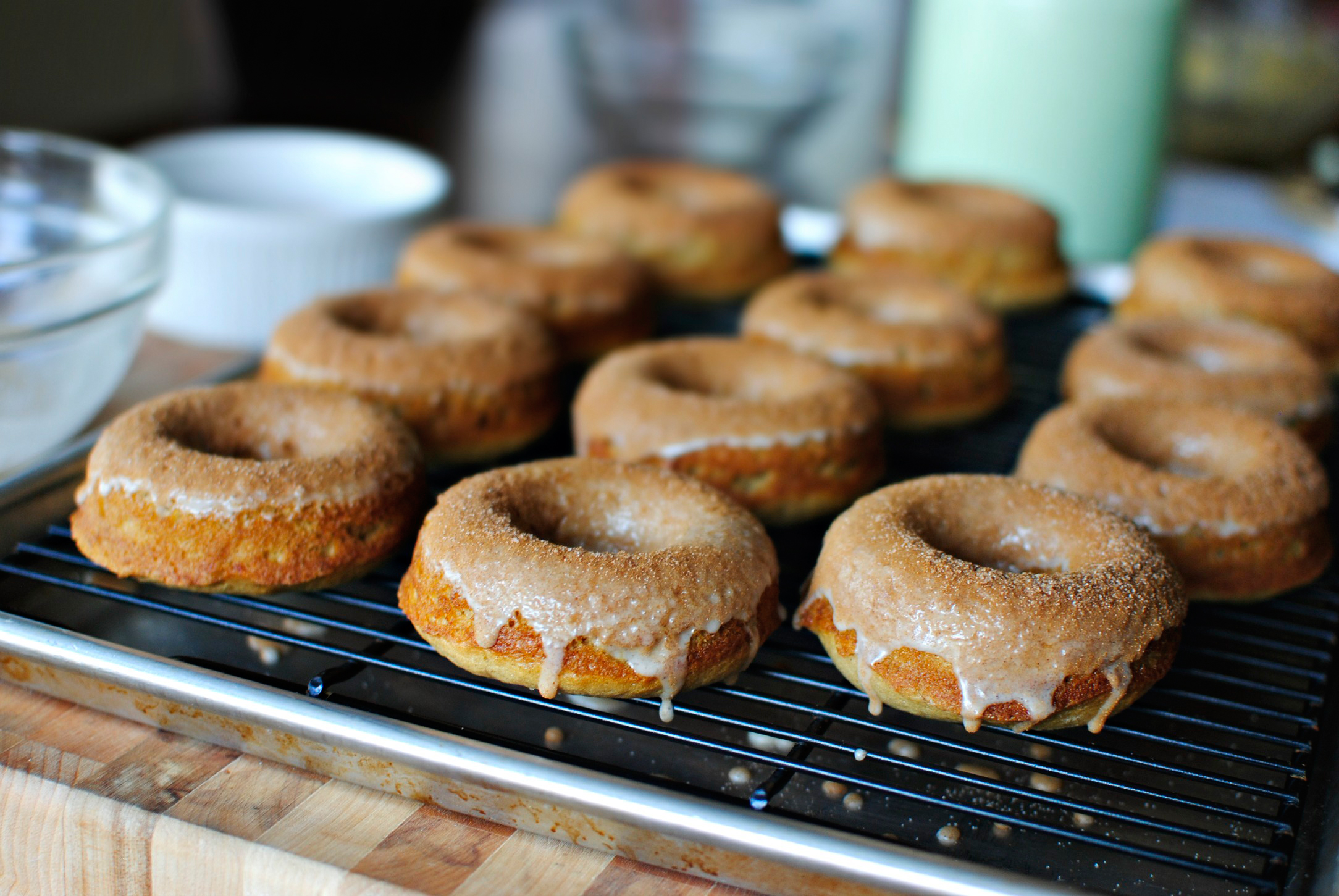 You can let the glaze cool a tad. But really, why even wait another second? 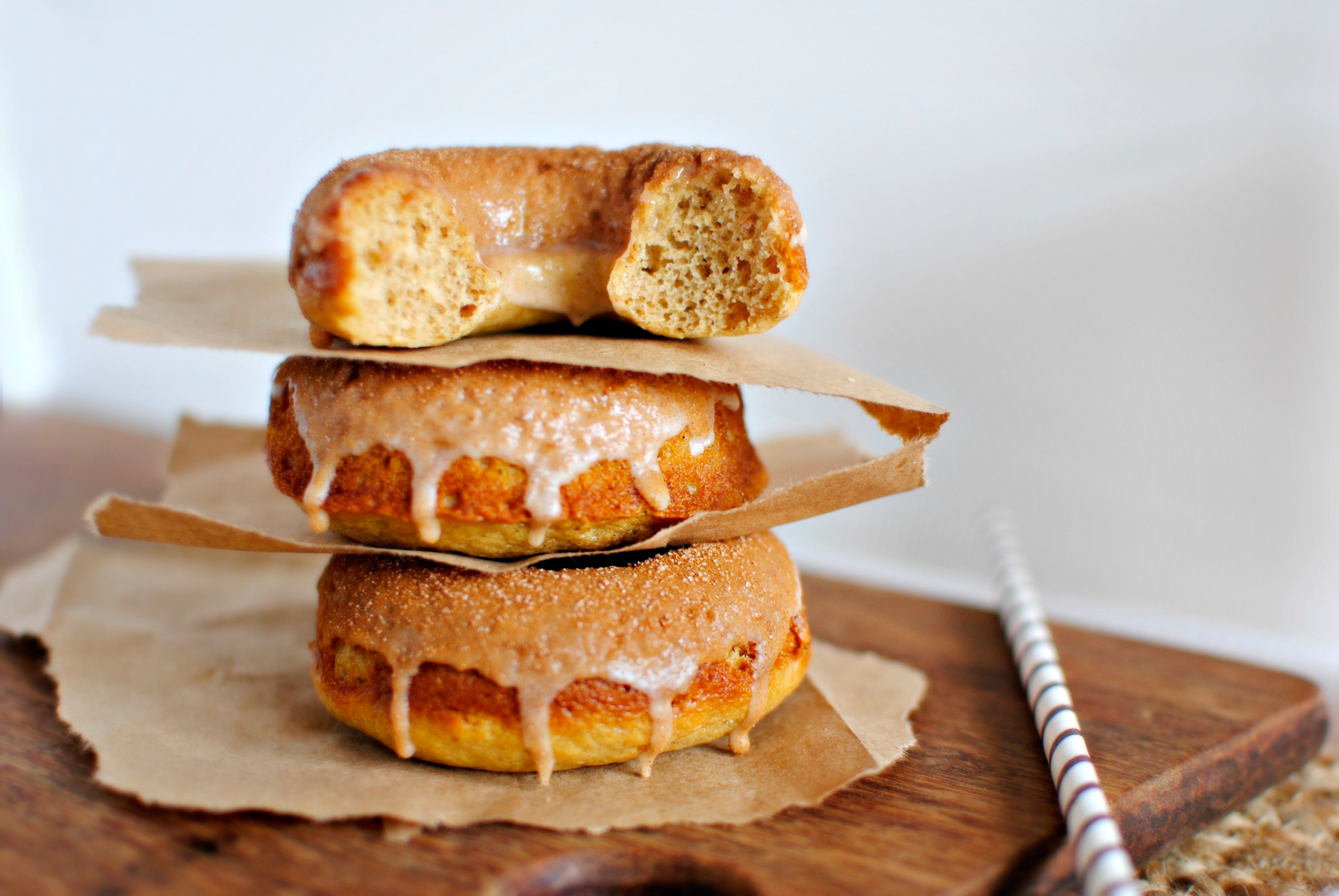 You guys. These doughnuts are nothing short of perfect. The texture of the doughnut is soft and moist, while the flavor of cider is not missed at all. Store them in an airtight container and they’ll last for days! Making these perfect for a fun snack in lunches or well, breakfast the next morning! 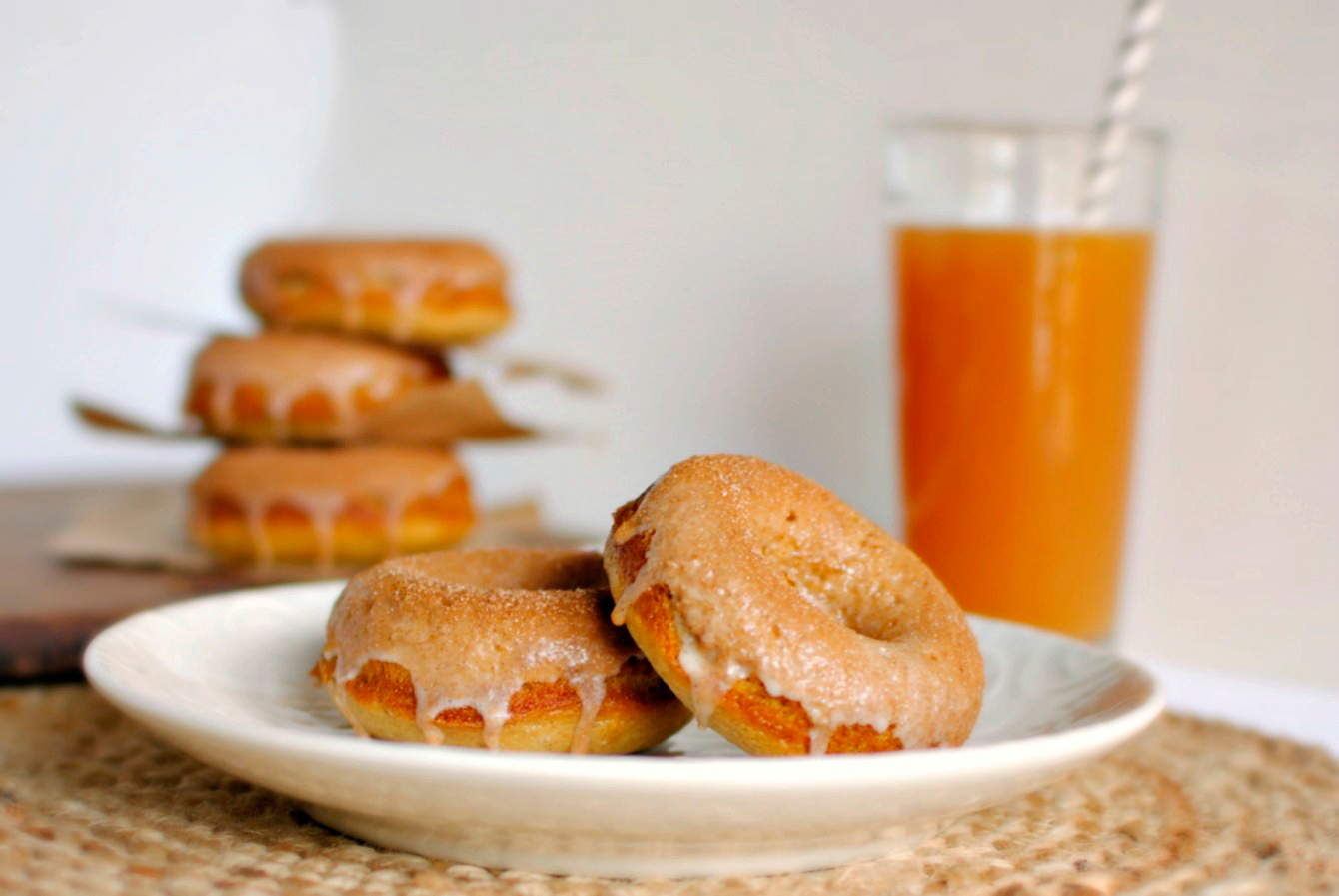 A big thank you to Aimee for sharing this phenomenal recipe! This is definitely a recipe our whole house loved and will be making for years to come. And I can bet you all will just love these too! 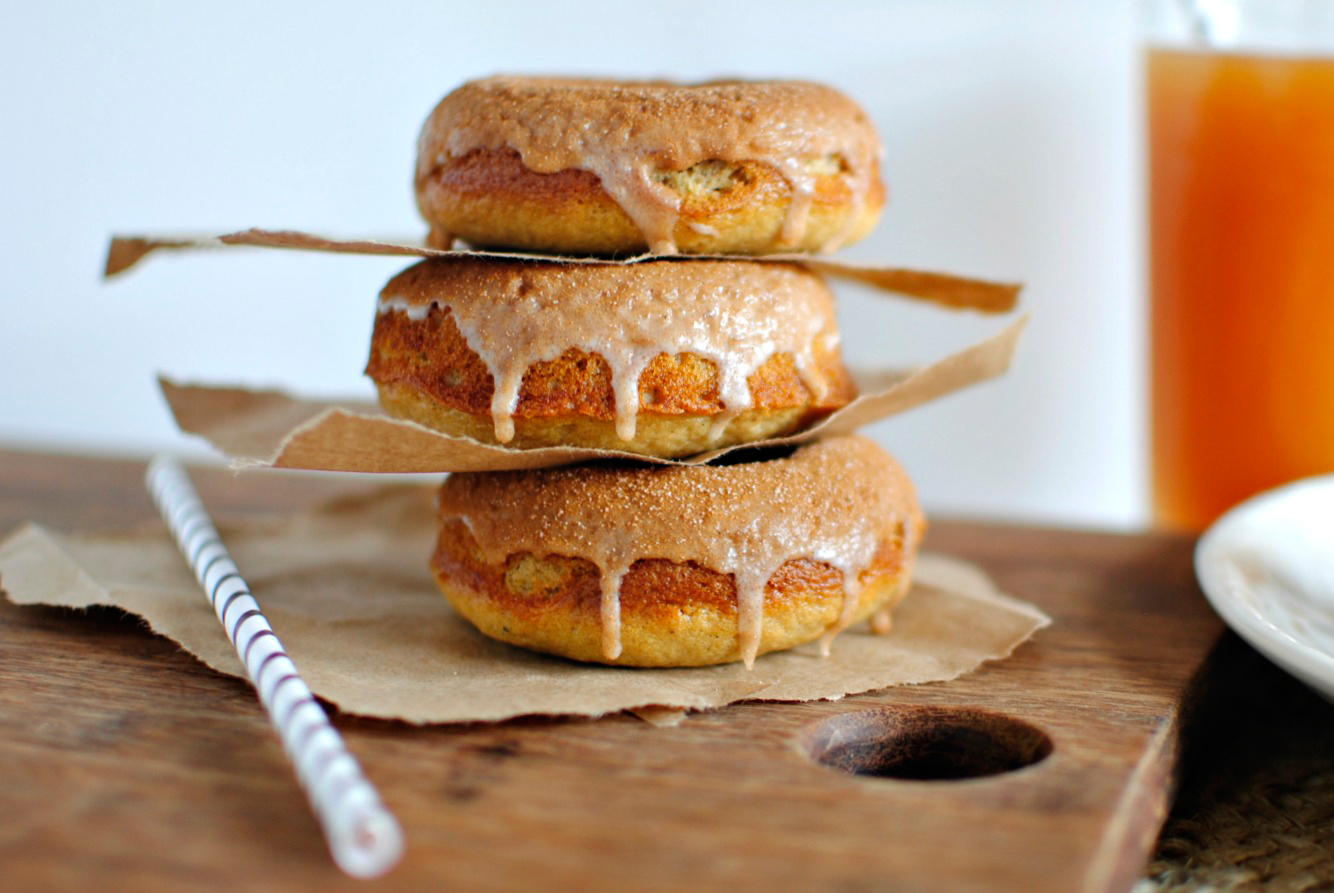 Please take a minute to stop by Aimee’s amazing blog Shugary Sweets where she not only dishes up an array of clever treats to suit any sweet tooth but other delicious easy to make recipes as well. You can also find her recipes here on Tasty Kitchen in her recipe box!

Note: the only change I made was to 3 tablespoons of apple cider (instead of two) in making the glaze.

Bake these donuts for a perfect fall breakfast!

Lightly grease a doughnut pan (I use Norpro brand). Pour batter into a large Ziploc bag, seal the bag, and snip off the corner. I find this the easiest and cleanest way to get batter into pan without dripping. Pipe the batter into the prepared pan.

Bake doughnuts in a 325ºF oven for about 10 minutes, until they spring back when touched. Remove from the oven and cool slightly before removing from pan.

To make the glaze, whisk together the apple cider, powdered sugar and allspice until completely smooth.

In a separate bowl, mix sugar and cinnamon.

Dip each doughnut into the glaze (top of doughnut only) and then into cinnamon/sugar mix. The glaze will run down the sides and coat nearly the whole donut. Allow to dry on a cooling rack. Enjoy!

Loved the donuts, did not like the icing. It tasted too much like powdered sugar. bleh. I went for more of a maple glaze. Here’s how:
Mix 1/4 c brown sugar and 1 1/2 oz butter in pan. Add 1/8 c milk and stir over heat. Add 1/4 tsp vanilla(or maple flavoring) and 3/4 c icing sugar.

@CarolA58, kinda odd to give a grade/review to a recipe you modified! Anyway, these look fabulous! Giving it a go right now.

I made these and they were really good. I did not have a donut pan so I used a cupcake pan and they turned out fine but did require some extra baking time.

Made these this morning. They are good, but not as moist as I expected they would be. I didn’t have applesauce, so I subbed plain yogurt. Also, added in a bit more cider (about 2 TBLS) to batter, as it was a bit too thick for my liking. Also, WAY too much powdered sugar….LOL….I baked two pans of donuts and found that 3/4 cup of powdered sugar is more than enough to coat the donuts…I spooned glaze over, (don’t like dipping, too messy) but still, it ran down sides and I was able to coat all donuts very liberally. I didn’t have glaze left to throw out, which is a plus in my book. I will probably make again, but will probably work with spices a bit to give donuts more flavor and also give glaze a bit more flavor…allspice flavor seemed to disappear in the glaze. Overall, a B+.

Just made these using Bob’s Red Mill egg replacer so they would be dairy and egg free. Worked great – just needed a couple extra minutes in the oven. Delicious!

Interesting that they are baked and not fried.

Yammy, i am hungry now :). can you please put sarma recipe, that was be great. Cheers

Now you have me missing MI! The doughnuts look incredible!

Updating my previous comment.
I made these this morning and they are really easy and tasty. All I had was cinnamon applesauce and it tasted great. I made some regular size and some mini donuts. I baked the mini ones 7 minutes.
These taste like fall!!

As luck would have it…I didn’t see this called for applesauce until I was mixing it all up and it came out fine. I will add the applesauce for the next batch to see if it enhances the apple flavor.
The next batch will be later this week ’cause I’m taking them to a BBQ.
Really, really easy to make and are darned tasty.

I made these as muffins since I don’t have a donut pan. Increased the oven temp to 400 degrees and cooked for 15 minutes. Very good – yum!

Could you use a bundt pan instead? I’m in China with no access to doughnut pans, but I’ve been craving something that reminds me of home (MI and VT). These look like just the thing! Also, would you change anything if you only had apple juice, not cider? Thanks!!!

Yummy looking! Now I have to go buy a doughnut pan to make these. They look awesome! Thanks for trying them out!

Hey- can it be- -Donuts with no fat in them and baked to boot?
It’s my lucky day cause I bought cider yesterday and I’ll be making these in the morning!

Just got back from getting the doughnut pans and cider so it’s about to be doughnut time!

Found the Wilton pans at Bed, Bath & Beyond for $9.99 each. Our local Wal-Mart does not carry them.

I am going to make these wonderful donuts to celebrate GIANTS win in the World Series. GO GIANTS! (LOL)

could these be made into muffins instead? i’m desperate to try ‘em and have no donut pan!

Definately on the “must try” list. They sound yummy.

Recipe said that a Norpro pan was used but the one pictured says “Wilton”. Probably doesn’t matter at all….any doughnut pan should work.

Hi Patti! That’s because the recipe was submitted by Aimee of Shugary Sweets, who was the one who mentioned that she uses Norpro. This guest post and the step-by-step photos are from Laurie of Simply Scratch, who uses the Wilton that you see in the photo. But yes, any pan should work!

I cannot go on with my life until I have had these! They look too good to be true! I especially love that they have so much apple cider!

Definitely making these soon, thanks for making the world aware of these!!

Thank you for the recipe! I am from Michigan too! I will pickup some apple cider from a local cider mill and try the recipe this weekend. GO TIGERS!

Aww Laurie, your pictures are so beautiful! Thanks for sharing and trying this recipe! We love it too

oh dear – these are so good they’re bad! for my waistline that is

Just what I needed to see on this lovely Friday! I’ll be saving this one…thanks!