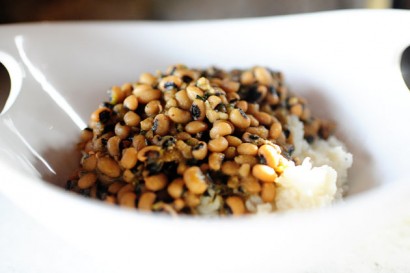 The pared-down, most basic version of this traditional New Year’s Day dish. Add to it as your soul leads you!

(Soak black-eyed peas in cool water for at least 6 hours. Rinse before using.)

Heat butter in a large pot over medium-high heat. Add onion, garlic, green pepper, and celery and stir. Cook for 3 to 4 minutes. Stir in soaked beans, then add chicken broth, ham hock, salt & pepper, and cayenne to taste. Bring to a boil, then reduce heat and cover the pot for 30 minutes.

After 30 minutes, check the liquid level; if it’s too soupy, cook with the lid off for another 15 minutes or so. If it’s too thick, splash in a little more broth.

Stir in vinegar, then taste for seasonings. Add more spice if needed.

Serve over white or brown rice, making sure to get plenty of the cooking liquid spooned over the top. Or, you may mix the bean mixture with the rice before serving.

Variation: use canned, drained black-eyed peas if preferred. Just use diced ham instead of ham hock and a little less broth, as peas won’t need to cook as long.

I just made this and it was wonderful. I used smoked beef sausage and sautéed it with the veggies. Even my husband liked it and he hates everything.

Absolutely divine. I could slurp the liquid soupy part all day long. I used the fresh black-eyed peas as well, and vegetarian broth and bacon instead of a ham hock. Even my kiddos didn’t mind choking it down for ‘Good luck’ lol

Made this yesterday with canned black eyed peas with bacon instead of ham & loved it! I also took your suggestion and added in red pepper as well. Yum!

The flavor is outstanding and we really enjoyed this recipe. I never liked black-eyed peas, but the promise of luck and prosperity for the New Year gave me the inspiration to give them another try and as luck my have it, Ree posted this great recipe. Thank you!

Excellent! The most flavorful black eyed peas I’ve had! I used smoked sausage in place of the ham and after cooking up the veggies I cooked it in the crock pot for 8 hours.

It may be tough to agree on which movie to watch, but an incredible snack is something everyone will love!
END_OF_DOCUMENT_TOKEN_TO_BE_REPLACED

Here's a quick and easy dish for those busy nights. Be a hero in 30 minutes or less!
END_OF_DOCUMENT_TOKEN_TO_BE_REPLACED 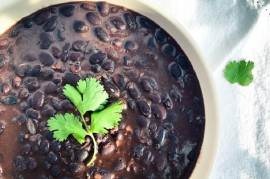 by Brittny Lyle in Main Courses
The secret to making these black beans so savory and rich...
0.00 Mitt(s) 0 Rating(s) 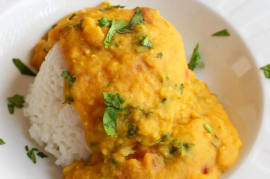 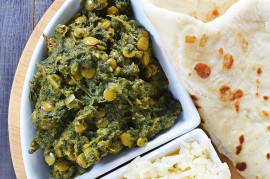 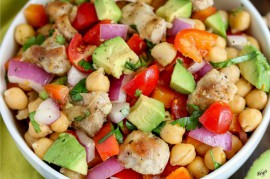 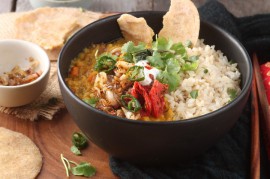 by Sebrena - Blume Nutrition in Main Courses
Red lentil dahl with a spicy onion and cilantro topping! Get...
0.00 Mitt(s) 0 Rating(s)