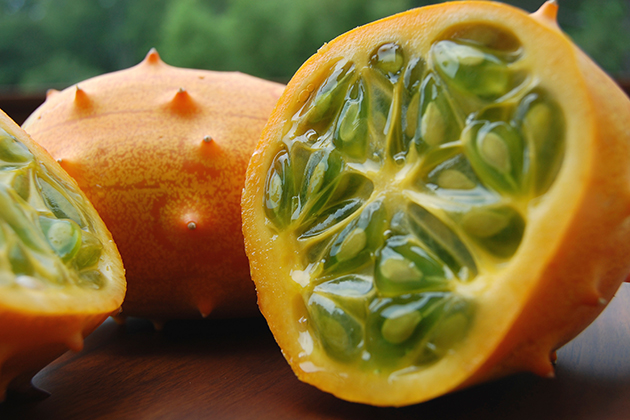 Heather, the picture is the kiwano or African horned melon, not the lemon cucumber.

I love both lemon and Armenian cucumbers. Haven’t found either here in Texas though.

We are lucky to have several Asian markets that I visit and try different things from. Jack fruit, different eggplants and peppers, etc. I’m always buying random things then looking up how to use them. Some of these experiments turn out better than others but it’s fun!

That lemon cucumber looks a lot like what I discovered in Costa Rica a couple months ago… Monkey Brains (actually called granadilla). What an odd experience. The outside looks like an orange, but the inside is a whole different “animal!” It’s obvious why it’s called “monkey brains” by the locals when you take one look at it. It’s sweet when you suck on it, but the texture is quite slimy. Glad I tried it though!

I love to eat lemon cucumbers just like an apple! I do not like other cucumbers for the most part. This spring I was so excited to find a lemon cucumber plant at the nursery. I brought it home, babied it, loved it, watered it, petted it, talked to it……then I had to leave for 5 days…..the husband forgot to water it…..POUT POUT! I live in the middle of nowhere so exotic fruits and veggies do not exist in my store. I will have to taste all these exotics vicariously thru this blog!

Since our son was small, we’ve challenged the family to try new fruits and veggies as we find them. This past month we went to a farmer’s market in Seattle and bought 2 lychee fruits. We’ve tried them canned but never fresh. It’s fun and an adventure. My son has stories about the experiments we have tried and all we did was go to the store.

Hey Erin, please tell me more about the “Armenian cucumbers.” I have looked for 25 years for seeds for the delicious curled vertically striped cucumbers I enjoyed for a decade in Saudi Arabia. The seed catalogs that list Armenian cucumbers picture them as ribbed, but uniformly light green and thicker than the striped ones. What was sold as zucchini in that part of the world was also different than here in the US–small, thick, cylindrical and pale green–they were mild and delicious.

It’s hard for me to think of things like Kolrabi as unusual–it lived in my mother’s vegetable garden way back in the 1950s and I have seen it in many supermarkets for decades, although it usually appears to be a seasonal thing only showing up in late summer and early fall. Jicama has been a salad fave in my house since the 1960s

Hey Beth B, I use Jicama as a snack cutting as you do and adding a bit of sugar and cinnamon, delicious! Cheryl

It’s not as unusual as the other fruits/vegetables here but I find that many people aren’t familiar with jicama. I keep it sliced into matchsticks in the fridge and it makes a wonderful snack with hummus or even plain. It can be added to a taco salad (or any salad, for that matter) for crunch. By itself, it has a slightly sweet flavor, mild and crunchy.

Last summer somebody at my husband’s work left a pile of Armenian cucumbers in the office kitchen, so he brought a couple home. Delicious! You don’t have to peel them because the skin doesn’t have that bitey, bitter taste you get with regular cucumbers. I’m growing my own out in the back this year and I love to slice them into chips and dip into tuna salad.

Love Ugli fruit. My mom and I discovered it years ago and it shows up now and then. Love it

Just a few Opo Squash, watermelon radish. I love trying new fruits and veggies then experimenting with them into some great original recipes, great fun exploring. Have a great day everyone!

In our house it has been the joy of the dragonfruit. My daughter loves them. We just found in the local grocery and said American grown. Until that moment, the few times I could find them in the store they were from Thailand. They are gorgeous red/pink and look like a flower bulb.

My grandmother use to grow kohlrabi. She would steam and it lightly butter it. Never thought of shredding it into slaw!

We, too, have discovered the Lemon Drop Melon. Very lemony. We love it!

We joined a CSA (Community Supported Agriculture) a couple of years ago, so we’ve tried lots of new vegetables. Two of our favorites are broccolini – which certainly isn’t new, but lots of people I talk to have never tried it – and kohlrabi. We grill broccolini nearly every time we make burgers or chops on the grill. With a squeeze of lemon juice and just a bit of grated parm it’s fabulous. Add grilled sweet corn and we’ve had double veg instead of traditional starch and veg for dinner.

Kohlrabi tastes a bit like radish, crisp and sharp, and it’s a great hot weather vegetable. I peel the ugly old bulb, and then shred and add to coleslaw, or just slice it thin and throw it in a salad.

I’ll be on the lookout for a lemon cucumber…right up my alley!

My newest discovery is the chayote squash. I’d heard of it before, but I’d never tasted it until a Mexican friend of mine made a big pot of beef and chayote soup for a party. It was delicious!!

Last summer we discovered the lemon drop mellon. Sweet, subtle, but with a lemon zing!