What To Do with Leftover Beer? 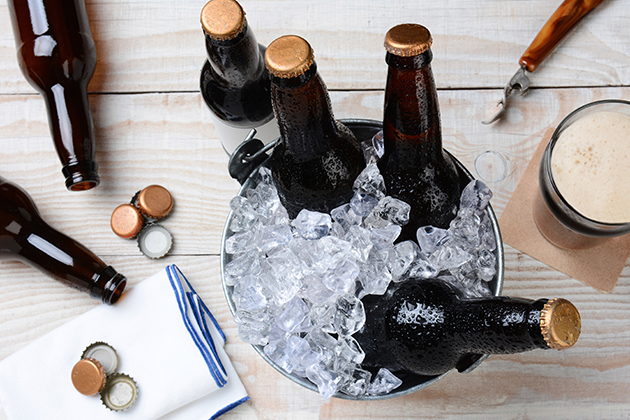 If we took a poll and asked people to name the unofficial summer adult beverage, I have a feeling beer would be at the top of the list. (Melted bourbon ice cream would be at the top of my list, but that’s just me.) The craft beer scene has really exploded in the recent years, and you can try a new beer every week and never have to repeat until March of 2089.

The thing is, like wine, beer is a very personal thing. What tastes great to you may never garner so much as a second sip from someone else. And, I’ll admit, I’ve been swayed more than once by creative label artwork or a funky bottle, only to be disappointed by the actual drink. Now that I’m gluten-free, watching friends kick it on a hot day with a cold brew in hand can be such torture, so I find myself compelled to try all the gluten-free beers I can find in my search for one I can really enjoy. It’s an ongoing search and I keep hoping I’ll eventually find it!

Meanwhile, my search often leaves me with 3 or 5 remaining bottles of something I don’t particularly care for. And it’s not just me. It happens to others who just enjoy trying different kinds of beer (you’re bound to stumble upon a few that turned out to be duds). Or maybe you had some six-pack-toting friends over (those are good friends to have), and now it’s the morning after and you’re left with random bottles that no one wanted to drink. However it happens, beer ends up in your house that you’re not inclined to drink. It may just be me, but I hate wasting stuff that’s still perfectly edible. Even though I wouldn’t drink it, I wouldn’t have the heart to toss it either. That kind of thing just goes against every frugal, penny-pinching bone in my body.

So that’s what we’re talking about today! To help save our beer-loving sanity, recover space in our bars, and for the satisfaction of being able to put good ingredients to use, let’s brainstorm together!

What can you do with an assortment of beer that you don’t particularly care to drink?

I’ve seen beer used in stew or chili, or for braising meat, particularly if it’s a strong-tasting brew. My husband once accidentally bought a spiced banana beer which would probably make a good beer bread. Or perhaps a lighter-tasting beer could go into a beer and cheese sauce. Maybe you have a favorite cocktail recipe that calls for beer, which will make the beer you have more palatable. Or do you have other non-edible uses for it, perhaps in the garden or for some really cool and unusual cleaning magic?

Whatever your ideas are, we want to hear them. And if you have a recipe to share, let us know! Let’s put our heads together and launch a campaign to rescue all the sad and lonely beer in the world! Or something like that.

P.S. Perhaps the real solution is just to be a man already and just drink it because hey, it’s beer. I could be down with that too.

We do a lot of fishing and one of the favorite dishes around our house is a beer battered fish fry. It is wonderful with malt vinegar. I also put beer in my crape batter.

Neither my husband or I drink beer very often, I’m more about wine, and he’s more about tequila or whiskey if we’re going to drink something, so we often have leftover beer that we’ve stocked for guests, or beer that friends have brought over. And it sits in the refrigerator forever! I’ve always thought our beer drinking friends need to visit more often, or we need to make more beer drinking friends. Maybe I can take it to a specified secret arranged drop off spot near the local college, as we all know that most college kids would be glad to have it, but I’m sure that isn’t the brightest idea either. So no, I don’t have any ideas.

Fill a saucepan, add some sliced bell peppers and onions, and throw in some brats. Delicious!

I agree with Claire R. Leftover Beer?…You’re funny!
I’m actually a Wine person and I would never cook with a wine I wouldn’t drink. If it’s bad to drink, it’s bad in your food too. I never ever have leftover wine either. Ha

I’ve never hear of ‘left over’ beer!! I just crack open a new bottle when I need it for cooking…then drink the rest.

As for beer I don’t particularly like…I just invite people over that like it. I have used those beer in cooking, but don’t like the flavor in the foods any more than I like the taste drinking it.

If you can’t be bothered to cook but can’t bear to just dump it down the drain, beer makes a great hair rinse! Use between shampoo and conditioner for extra shine.

This is my favorite summer recipe that uses beer. There are several steps and it takes time, but it is SO GOOD. http://www.williams-sonoma.com/recipe/beer-braised-barbecued-chicken.html?cm_src=RECIPESEARCH

Beer is wonderful in chili and my other favorite way to use it is to make incredibly light batter for onion rings. I’ll bet it would be good in corn dog batter, too, although I haven’t tried it for that. I can’t understand pouring it down the sink–no one has ever guessed that there is beer used in my onion ring batter, beef stew, or chili. The alcohol cooks out, so no one needs to worry about that.

This pizza crust is unbelieveable! By far my favorite….I prefer a light beer but would try any leftover beer. I just throw all the ingredients in my bread machine and end up with (2) beautiful pizza (or calzone or?) crusts. You must try it!! Love, Mary Beth

i use any kind of beer to baste my turkey. it turns out delicious and it doesn’t taste like beer at all.
it might be good with roast chicken too, i never thought about trying it.

Beer is an excellent item to cook with. When it’s left over, it’s a gift. Use in pot roast, cheese soup, to cook Brats. I use La Croix because I don’t like beer.

I don’t think there’s ever been “leftover” beer in our house, just beer waiting for the next day!

Seriously, it’s like wine – you shouldn’t cook with it if you don’t like it. So give it away or simply pour it down the drain. Life’s too short to drink crappy beer!

Great ideas! I wish I had some to contribute, but this is inspiring me. I still have winter beers left over from our Christmas Party! Lol.

Pour it in my garden

Random leftover beer…..its not just in your fridge!!! I have only used beer for crockpot ham…I always forget to find other recipes to use it up. After a long, long time, when I have been unable to pawn it off on anyone…….I water my compost pile with it……the compost thanks me….burb!

I was going to suggest cheesy beer bread, but I see you already thought of that. Personally, I’m not a beer drinker, but I recall trying a few stew recipes that called for beer through the years.

I use beer all of the time when I crockpot beef. I especially like to add beer to PW’s Italian Roast recipe with pepperonicinis….or to a pot roast with carrots & onions. And if you have light beer left over, you can add 2 cans of beer to a can of frozen limeade, add a can of 7-Up or Sprite (whatever you have) and then 1/2 of the limeade can filled with tequila….stir, pour over ice and now you have Beer Margaritas! And if you share, you’ll have friends for life.

What is this “leftover beer” of which you speak?

Just pour in down the sink drain! Eck tasting to any beer…

I add beer to marinades and also to barbeque sauce to thin it out some. I also use it in batter for deep frying vegetables. I also braise brats in it and drink it, like Kim P.

We use beer and lime juice to marinate chicken for fajitas with cumin, oregano, sliced onions and peppers. Salt, pepper, chili powder-you could even throw in coriander and Adobe chilis. Grill them up after marinating!!

I make beer braised chicken all the time, even when I don’t have leftover beer. Really easy too. Just brown some chicken pieces in a pan over high heat until golden on all sides (you can use some olive oil, or just let the fat render from the chicken skin, which I normally do), add some sliced onions (as many or as few as you like), add a can of beer (one can for each whole chicken), bring to the boil and cook, partially covered, until the chicken is tender. Great quick weeknight dinner in our house, though I suspect it wouldn’t work with banana beer…

I add beer to my chili or braise brats in it. Sometimes I just drink it.