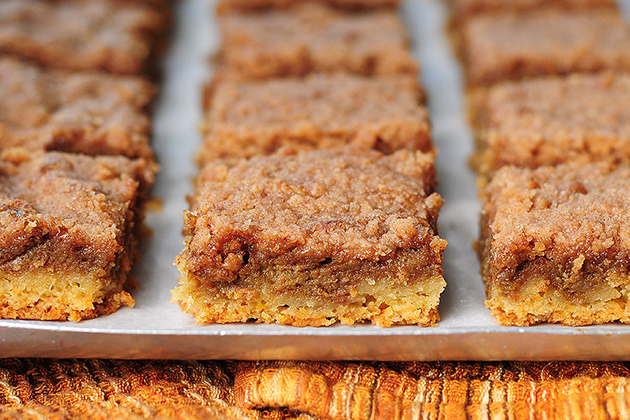 For all of you pumpkin pie fans out there looking for an alternative to the holiday favorite, do I have a recipe for you! The recipe for Pumpkin Pie Bars, submitted by Tasty Kitchen member Sharon from cheesypennies, has been waiting in my TK recipe box for a while. I finally got around to making a batch a few days ago, and then a second batch today. Yep, they were that good. Not sure why I’ve waited so long. They met approval from all who tried them, so you can be sure that they’ll make a few more appearances around here throughout the holiday season.

Wanna see how to make them? 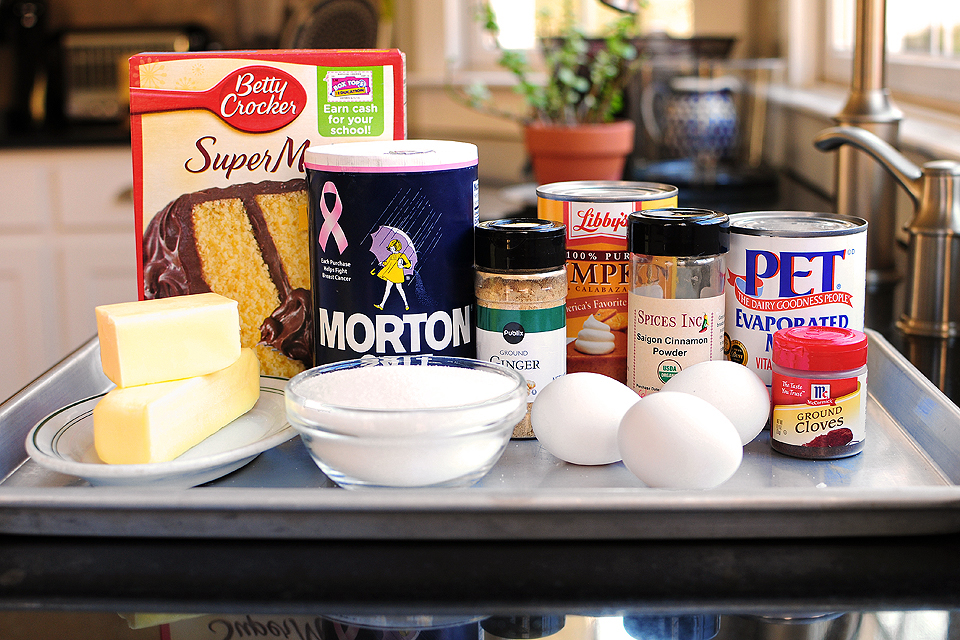 There are three steps to the recipe, with different ingredients divided, so be sure to read through the whole recipe first to avoid any confusion. Not that I would know anything about getting confused or anything … no, not me. 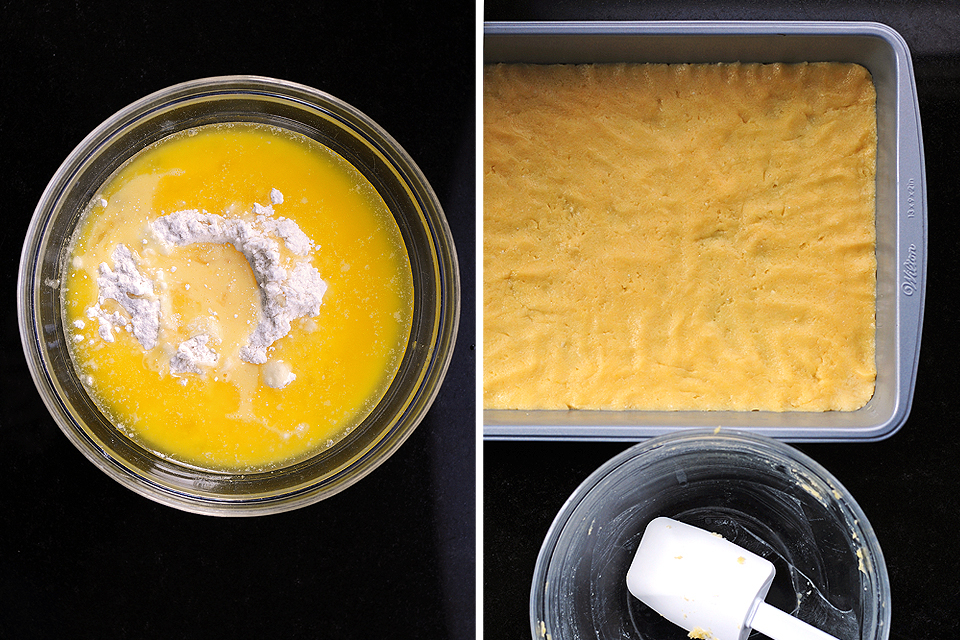 Begin making the crust for the bars by mixing part of the cake mix, with one egg, and some melted butter. Once combined well, spread evenly in 13×9″ pan. I found using my hands to spread out the crust worked much easier, and was much more fun, too. 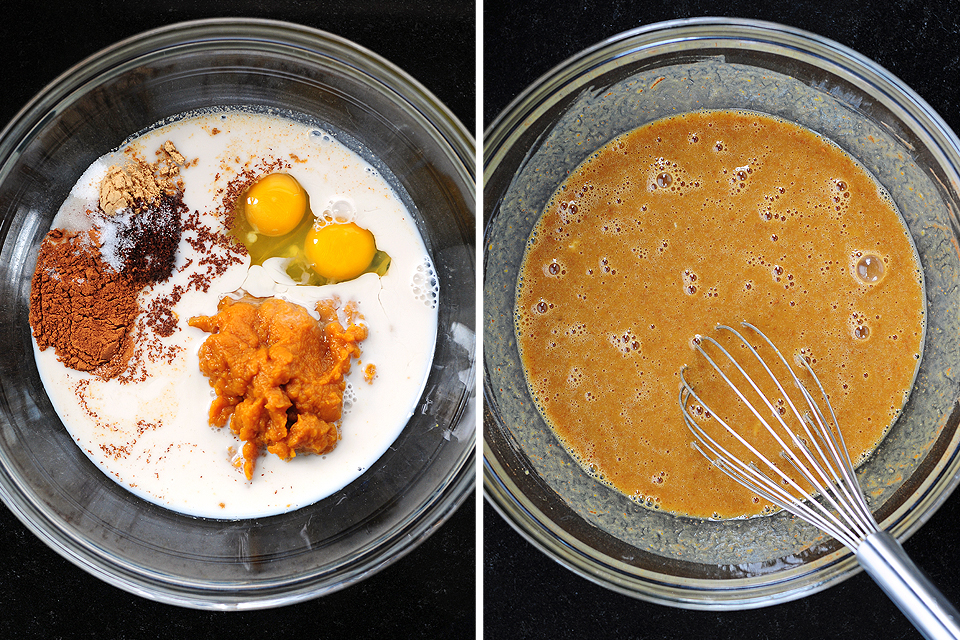 The second step is to make the pumpkin filling for the bars. Whisk together sugar, cinnamon, ginger, cloves, salt, pumpkin, evaporated milk, and eggs. 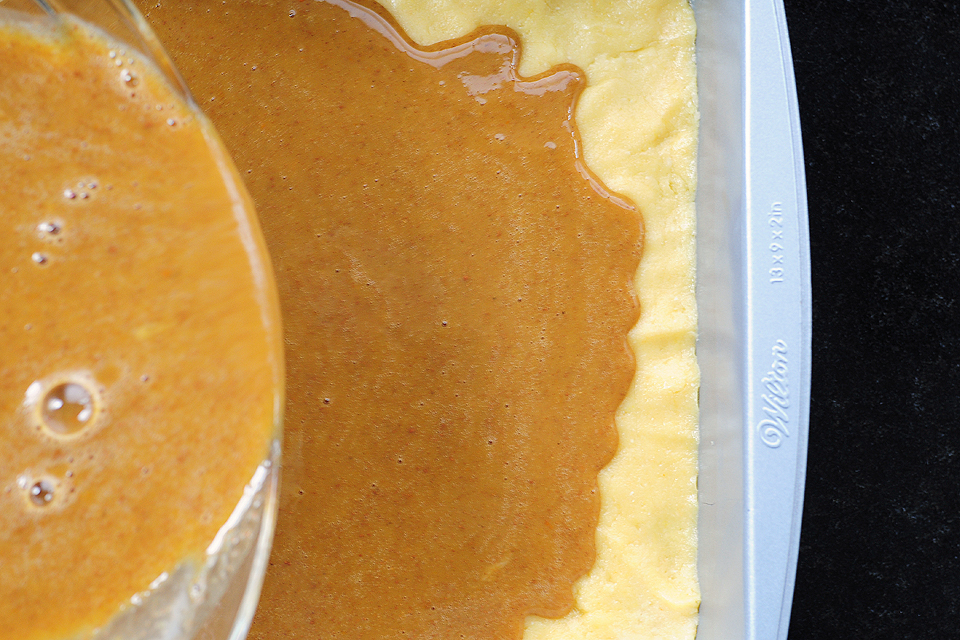 Pour the filling over the crust.

Note: The filling may seem a little thin, but it thickens up during baking just fine. I promise. Also, for the second pan I made, I was out of evaporated milk, so I substituted unsweetened almond milk with no problems whatsoever. 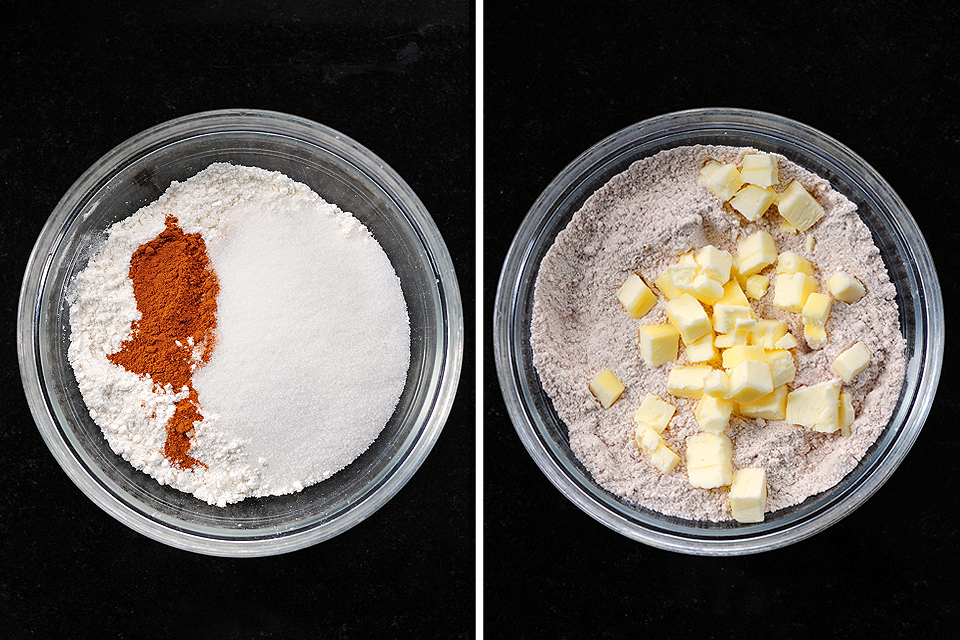 Finally, for the last step, the topping. Stir together the rest of the cake mix, sugar, and cinnamon.

More butter! Toppings need butter, don’t they? Sure they do. 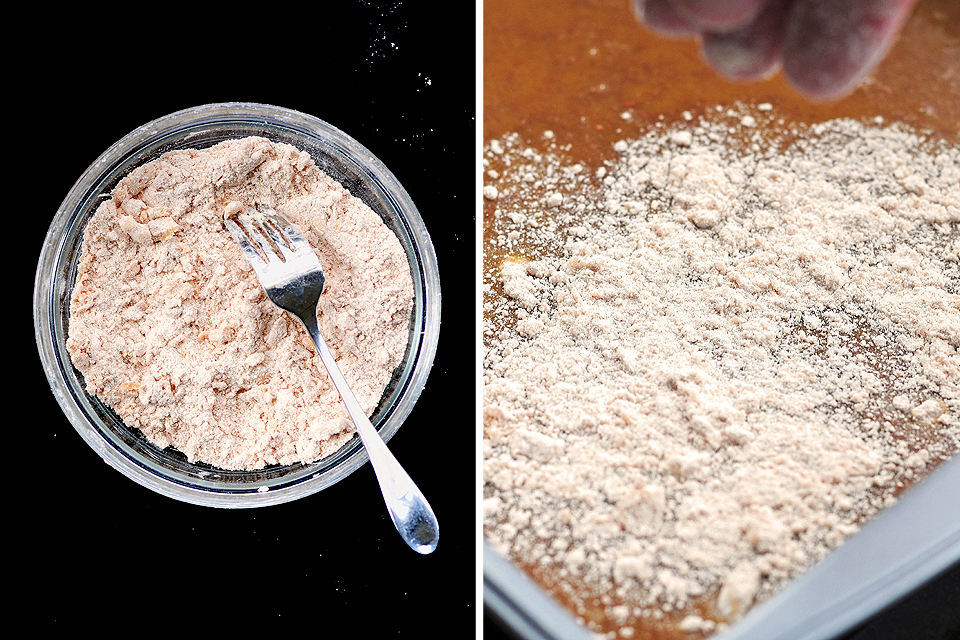 Cut in cold diced up butter. Once incorporated, evenly sprinkle the topping over the filling. Again, I used my hands for sprinkling.

A tip: A pastry cutter is a wonderful tool. I used a fork, but something I remembered while cutting the butter is a tip I learned from my friend Deb over at Smith Bites. She freezes butter and then uses a cheese grater to shred it into biscuits and other doughs when needed. It works wonders. I only wish I would’ve remembered that trick for this recipe. That reminds me, I should stash a pound or two of butter in the freezer now so it’s ready throughout the holiday baking season. 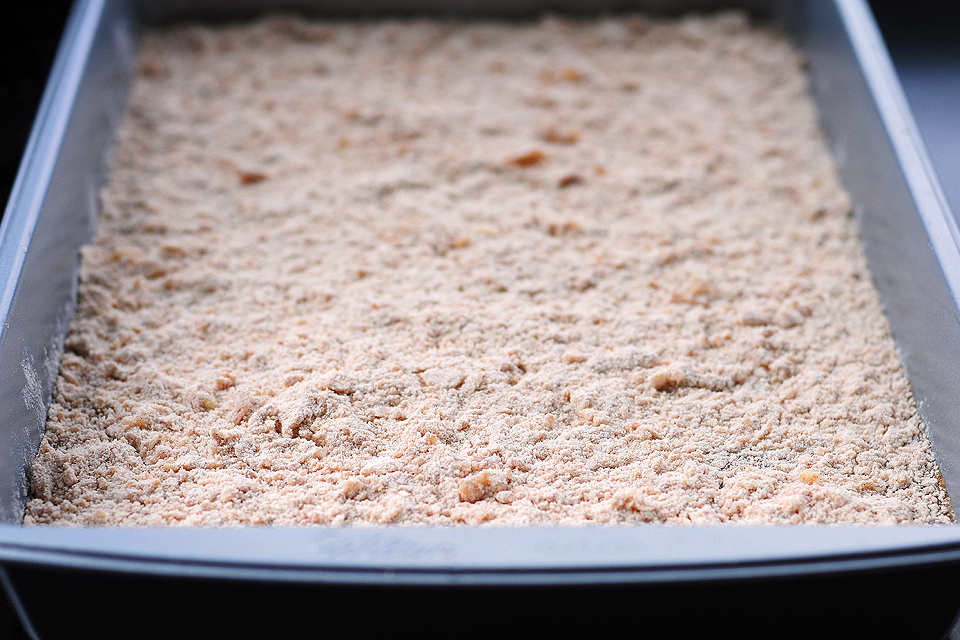 The first time I made these I thought the topping would just sink down into the filling, but it magically sits nicely on top. 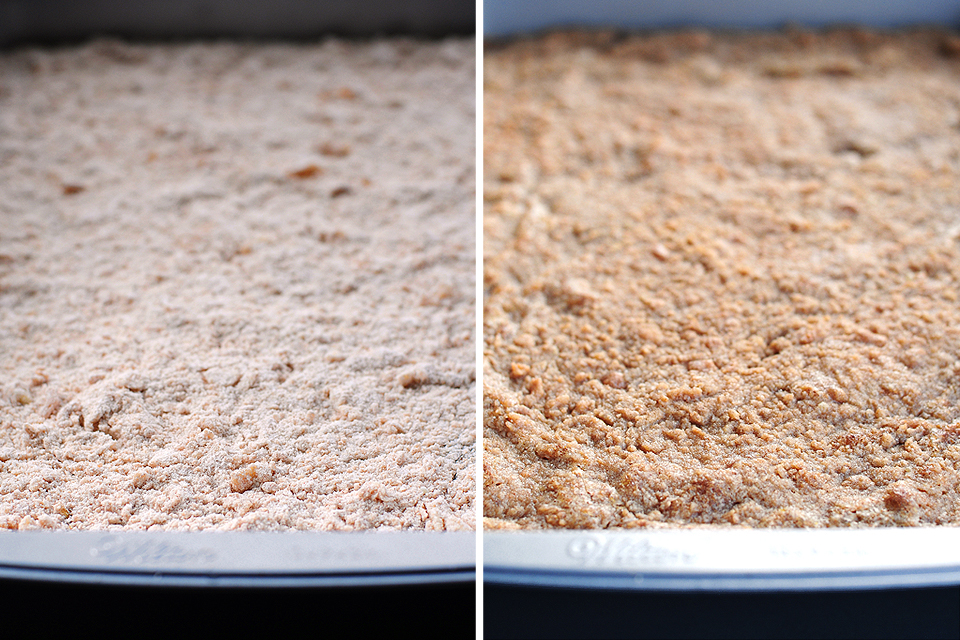 Carefully transfer to an oven and bake according to recipe instructions, until golden. Your house will smell divine! 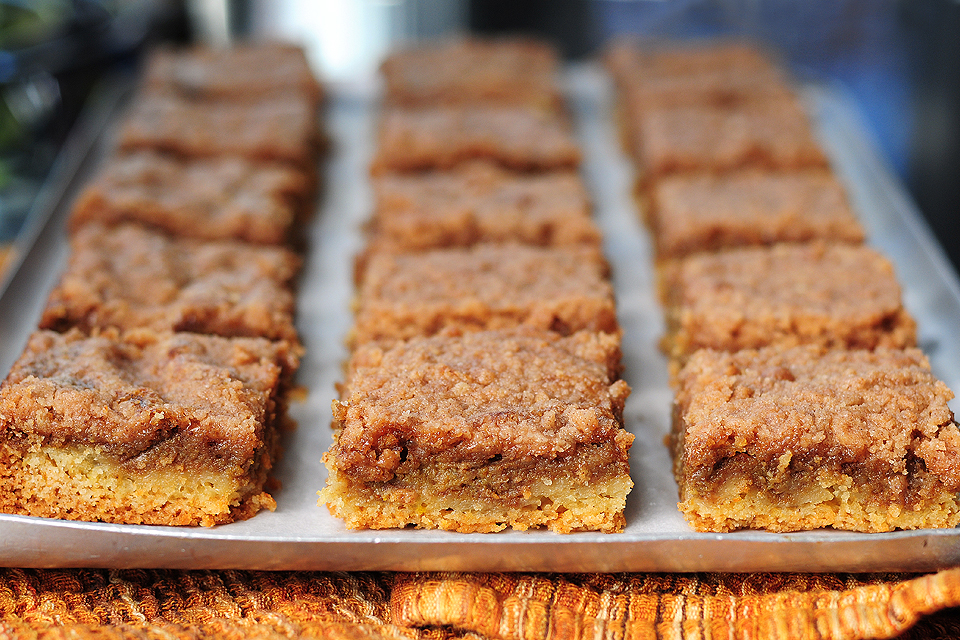 Let cool completely before cutting and serving (if you can wait that long). To push it over the top, serve with a scoop of ice cream, along with a warm cup of coffee. Perfect.

Thanks so much to Sharon from Cheesy Pennies for sharing this delightful recipe with the Tasty Kitchen community. I know it will soon be a new holiday favorite in our home. 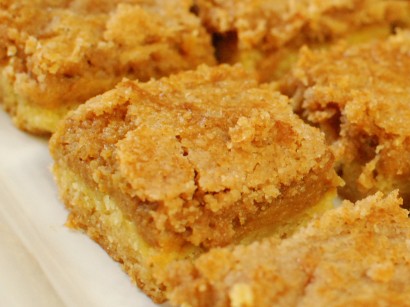 All the yum of pumpkin pie, minus the hassle of a pie crust, plus the bonus of a buttery cinnamon topping. No trick…just an amazing treat!

This recipe has three parts, a crust, a filling and a topping. Before you start anything, preheat your oven to 350F, and get out a 13×9 pan.

For the crust:
Reserve 1 cup of the cake mix for the topping. Pour remaining cake mix into a bowl, then stir in the one beaten egg and the 1/2 cup of melted butter until the mixture is well combined. Press evenly into the 13×9 pan and set aside.

For the filling:
Combine 3/4 cup of sugar, 1 teaspoon of cinnamon, the ginger, cloves, salt, pumpkin, evaporated milk and 2 eggs together. Using a whisk, stir until smooth. Pour over the crust.

For the topping:
Stir together the 1 cup of reserved cake mix, and the remaining 1/4 cup of sugar and 1 teaspoon of cinnamon. Cut in the 1/4 cup of butter dice using a pastry blender or a fork. Sprinkle evenly over the filling.

Bake at 350F for 35-40 minutes, or until filling is set. Allow to cool completely, cut into bars, and serve!

I made these 5 times in December. They have been a hit everytime I make them and requested often. Thanks for the amazing recipe.

I made a version of this. I say a version because I couldn’t find my 9×13 so I made it in an 8×8 and used sweet potatoes instead of pumpkin. It was a gooey, sticky, delicious mess.

My co-workers enjoyed it greatly. Thank you for sharing it.

While good, I wished there was more of a pumpkin taste to the bars.

OMG!! Made this last night and it was absolutely incredible!! And it made the house smell divine. Thanks for sharing.

To answer a few questions:

SadieMN: One (1) cup of the pumpkin is the correct amount

We made these last night and tasted them and found them delicious. However, today, when cutting one and eating it, they are definitely soggy. Is this normal? It is NOT caky, just to be clear. It is wet and soggy.

Is one cup of pumpkin right?…I check a few similar recipes and they all call for 1 can of pumpkin or more.

Does anyone know if the 1 cup measurement is the right amount?

Thanks for any help !

These are slap your mama good !!

Does anyone know if this will work just as well with Sweet Potato pie filling. I want to make the pumpkin pie ones but I also always make sweet potato pie for my daughter (one for family, one for her to take home..it’s required). Has anyone tried it?

What a fun spin on pumpkin pie! I love it!!

This looks like a great treat for the kids

Made these today for our last Master Gardener class. They were a hit!

Just made these and they are out of this world!!!!

This is one of my favorite holiday recipes; however, my recipe calls for 3-4 drops of green chili sauce – I know sounds weird – but it just gives it a little kick and makes them even harder to resist. My topping has pecans also. Yummy!!!!

HELP! I made this recipe last night and I can’t stop eating them. OMGosh! They are great warm & cold, and with whipped cream and without. I just went back to the store & got stuff to make a second batch to take to a Lifegroup.

I made these using a real crust (like any other crumble or lemon bars) and a real crumble topping as well so as to eliminate the “cake mix” and it was outstanding!!

I made these last night and they are awesome! I brought them into work this morning to share and you can hear everyone saying “MMMMMMMMMM!!!” when they take the first bite!

Do you know how far ahead you can make these? Could I make them Tuesday and serve them on Thursday (Thanksgiving)?

This looks waaayyyy less intimidating than making a whole pumpkin pie. I can’t really get pureed pumpkin here where I live so if I were to make my own puree, I’d want a recipe easy enough that it wouldn’t fail me, thus voiding all the effort put into making the puree itself. I think I’ve found the right recipe!

********Sharing on FB PROBLEM****These look amazing, and I wanted to share on my FB page, however the picture looks like hot pepper jelly, and the description is for Quiche. Any idea what’s going on? It happened the other day with the flavored popcorn recipe that I tried to share. Thanks for listening! I love your site!

Wow, these look fantastic! My grocery store makes wondeful bars and I would love to know how to make these.

How cool to find these on the TK blog! So glad you liked them as much as I do. Thanks Amy!!!!

Sounds great! I’ll be making it this weekend and adding pecans to the topping for a little crunch.

Great recipe, and I can’t wait to make it with a gluten free cake mix.

Wanda, I’ve used the larger holes, like the ones used for grating mozzarella. I also think it is a great idea because you sometimes want the butter to still be cold (like in pie crusts or biscuits) when it is mixed with the other ingredients.

What side of a box grater do you use to grate butter? The itty bitty ones or the larger ones like for mozzarella?

These look so tasty! Thanks for sharing!

i think i may just love these more than the real deal – the crust sounds awesome!

These look wonderful, cannot wait to try them. I also love the tip you gave us about the butter and the cheese grater, who would have known! Thanks for the recipe!

Looking forward to making these for Thanksgiving! And thanks Amy for the frozen butter/grater tip as I always seem to be a bit pastry cutter challenged!

I love anything pumpkin. Muffins, bars, coffee creamer (http://lollingabout.wordpress.com/2012/09/28/foodie-friday-pumpkin-spice-coffee-creamer/), I’ll take it all!

Do you divide the cake mix evenly between the crust and the topping?

I adore these things and have made them many times. I use self rising flour in a lot of my cooking so I have it on hand all the time. One time I wanted to make an 11 x 14 pan of these and used 1/2 cup or so in the cake mix to do the increase and then increased the other stuff accordingly…turned out fine. Another time, I accidentally used the whole cake mix in the base layer. Whoops… So I made a flour butter sugar and cinn. and vanilla combo for the crusty stuff to top the pumpkin stuff…turned out good too. This recipe is pretty forgiving…altho I don’t like the crust to end up an inch thick and the pumpkin only” 1/2 thick. I really feel like I’m more picky than most of my guests!!!

Whoops! I totally forgot to mention that I used a regular size cake mix without adding anything and it worked great both times.

I just made these for the first time over the weekend and used a regular box of cake mix for the top. It worked just fine. (My recipe didn’t have a crust so I will have to try them again.)

I wonder if the new, smaller size Betty Crocker or Duncan Hines cake mixes affect the original outcome of this recipe. Unfortunately, neither cake mix is 18 oz. anymore. I’ve heard suggestions to add 5-6 tablespoons of additional flour or a scant 1/3 cup extra cake mix from an additional box.