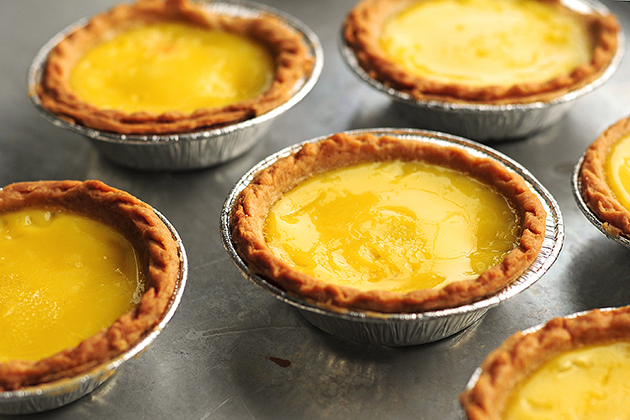 Do you pass by recipes that look like they’re too much to mess with? I do it all the time, often finding out later how easy many of those recipes really are. Take these Hong Kong Egg Tarts submitted by Kristy of eatplaylove, for example. At first glance, I thought they’d be more involved, with water baths, tempering cream and eggs, or the like. Thankfully, a friend—who happens to have excellent tastes—mentioned that they were one of her favorite desserts when she frequents Chinese restaurants. Kristy also mentions in the recipe that they’re listed on The World’s 50 Most Delicious Foods as compiled by CNN Go.

I’d never heard of them before but I was intrigued to see what the fuss was all about. I was happy to find them quite easy to make. So easy that I made two batches in two days, and for the second batch I dropped the crust for a gluten-free version. Of course they’re tasty, or I wouldn’t have made the second batch. They kind of remind me of a custard pie my grandmother used to make. 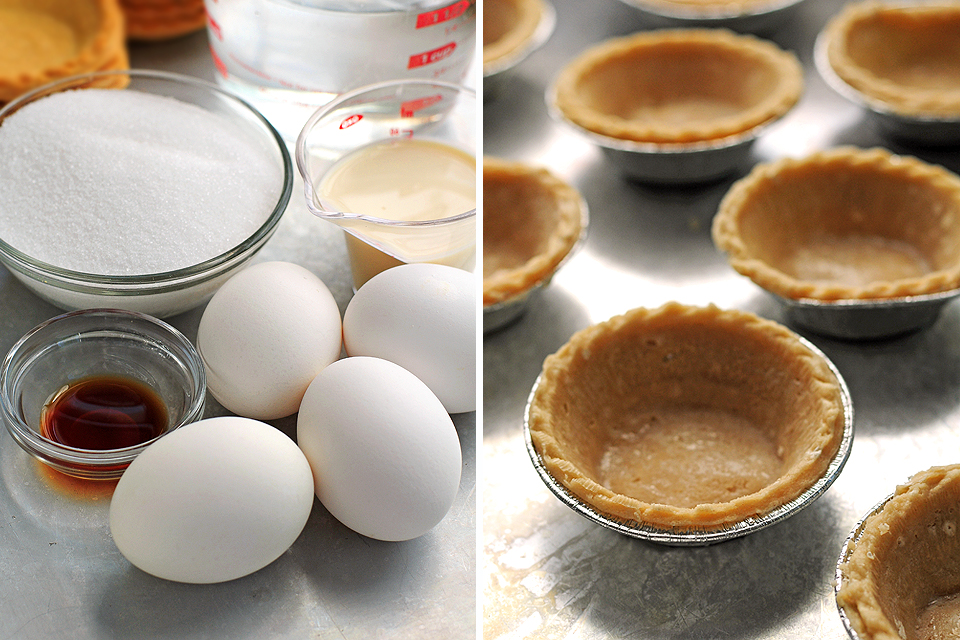 This ingredient list is short. Begin with water, sugar, eggs, evaporated milk, vanilla, and prepared tart shells. Use your favorite pie crust recipe, or take a shortcut and use pre-made like I did. I found frozen mini tart shells at our local grocer. For the gluten-free version, I used small ramekins (see the end of this post) sprayed with cooking spray. 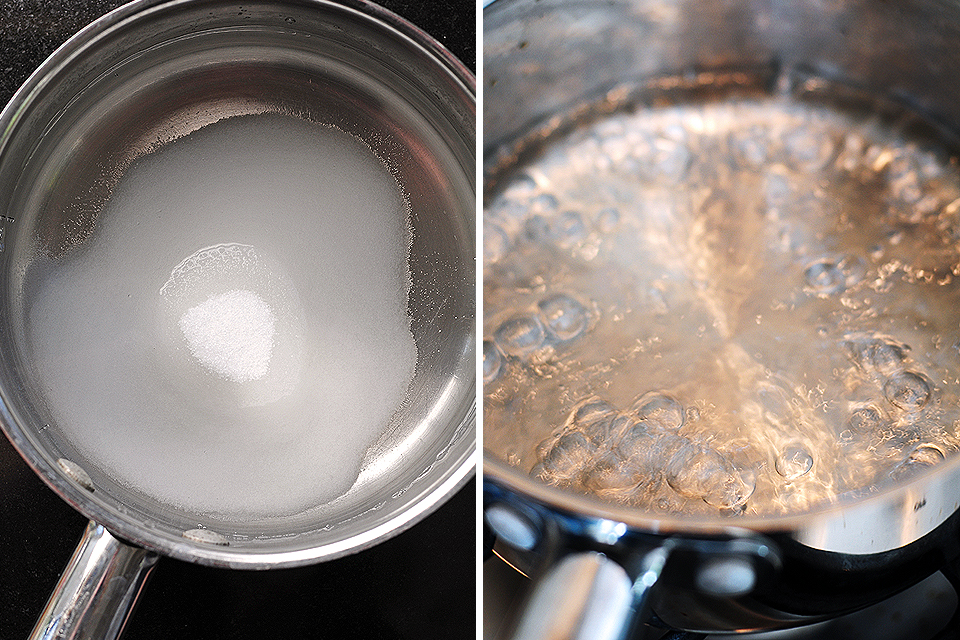 Start by combining the water and sugar in a sauce pan and heating it to a boil. Set aside to let cool. 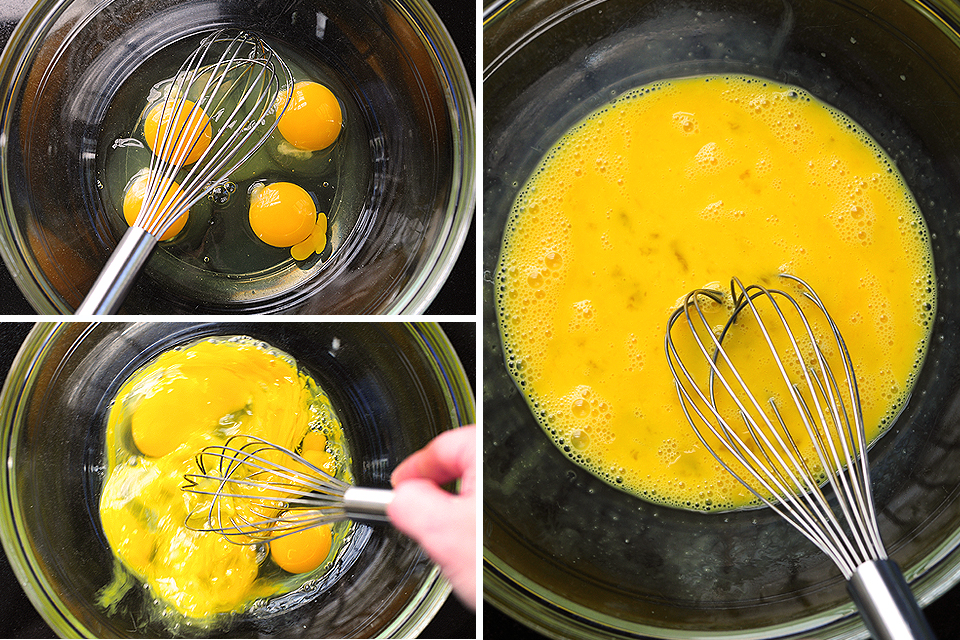 Next, in a large mixing bowl, beat the eggs together. 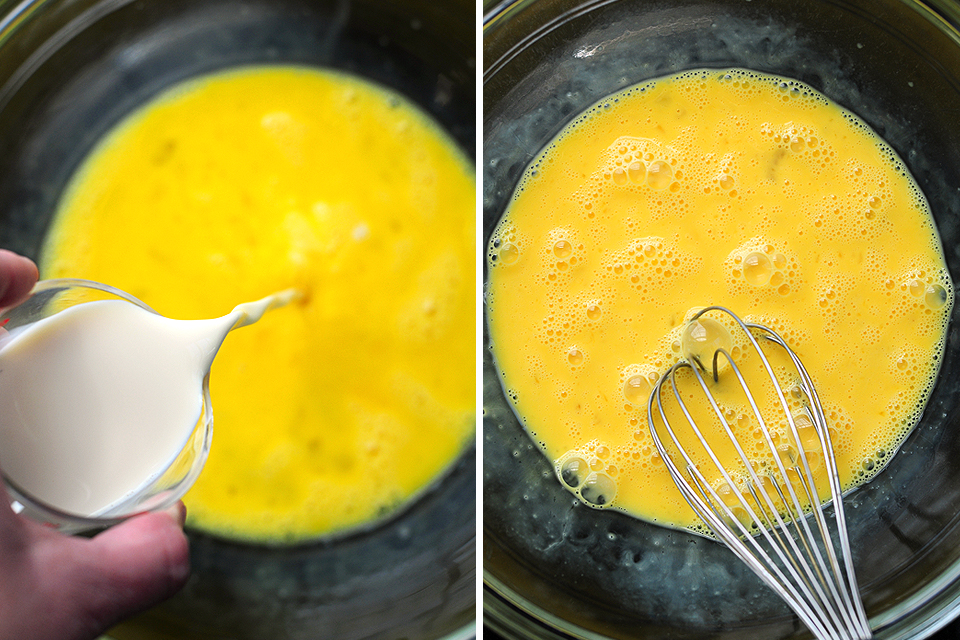 Add in the evaporated milk and combine well. 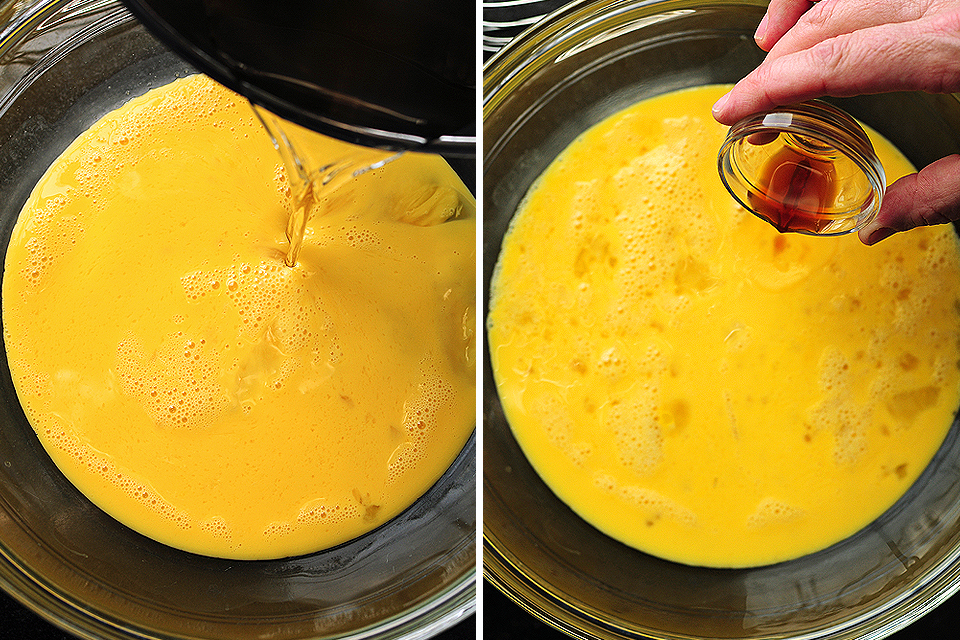 Once the sugar water mixture has cooled a bit, gradually add it into the egg/milk mixture, as well as the vanilla. 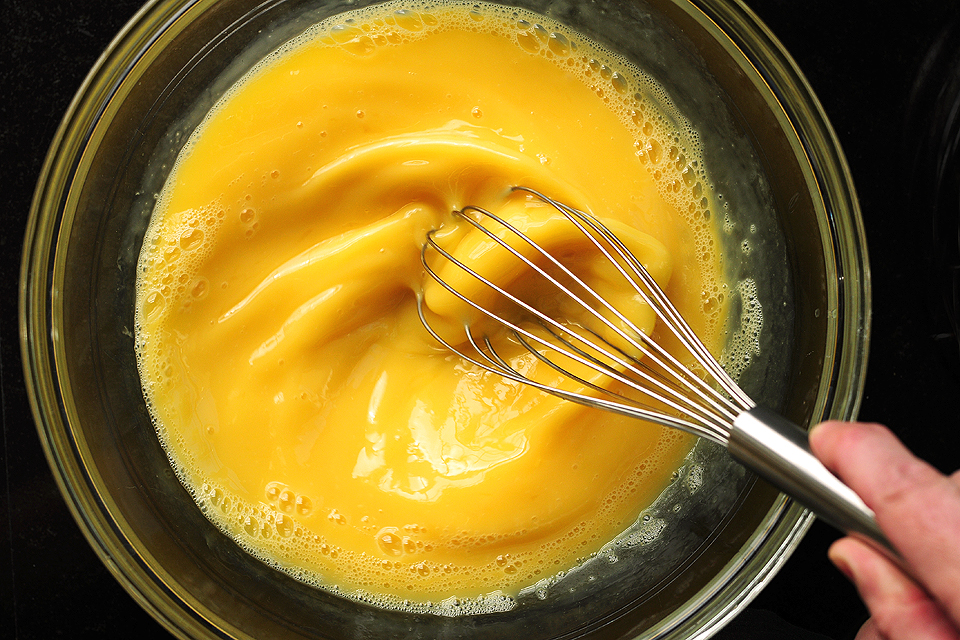 Mix it all up! See? How easy is that! Almost finished. 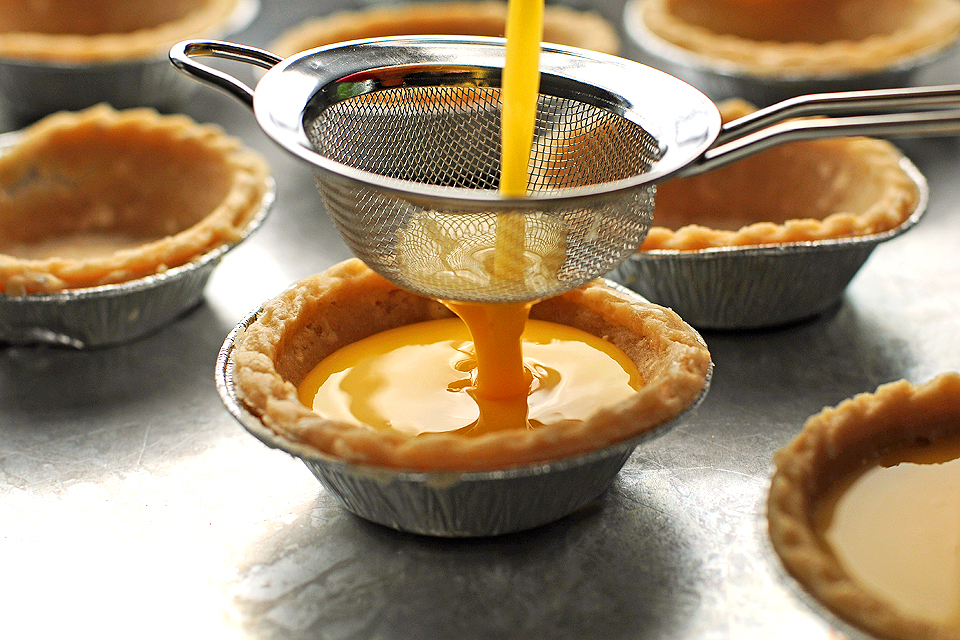 To avoid any clumps, pour the custard into the individual tart shells (or ramekins) through a sieve.

Bake according to recipe below. The egg mixture will slightly rise and set, and the crust should be golden brown. 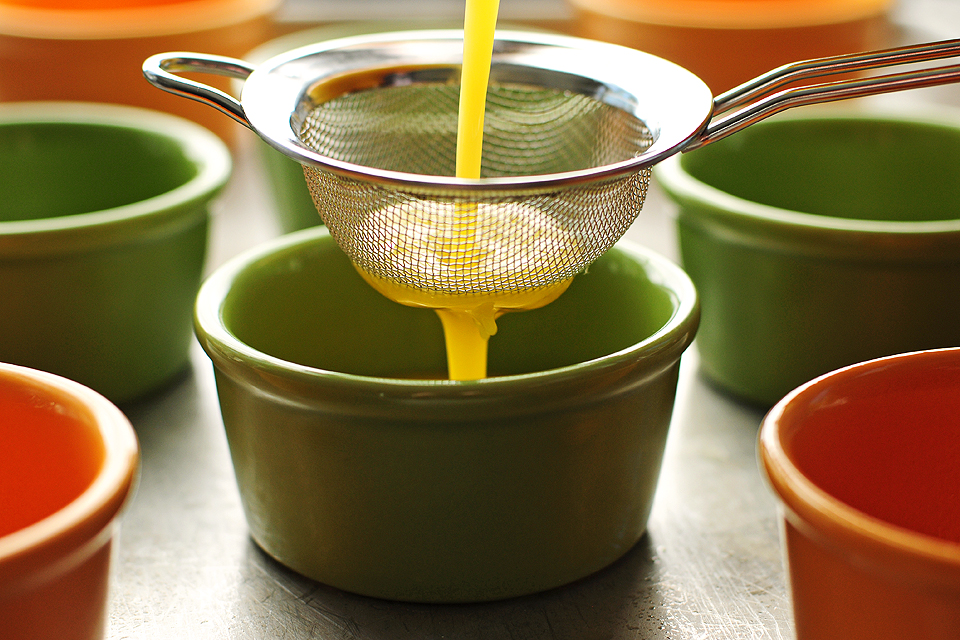 If going with a gluten-free version, again, pour the egg mixture through a sieve into coated ramekins. Bake for the same time as stated in recipe below. 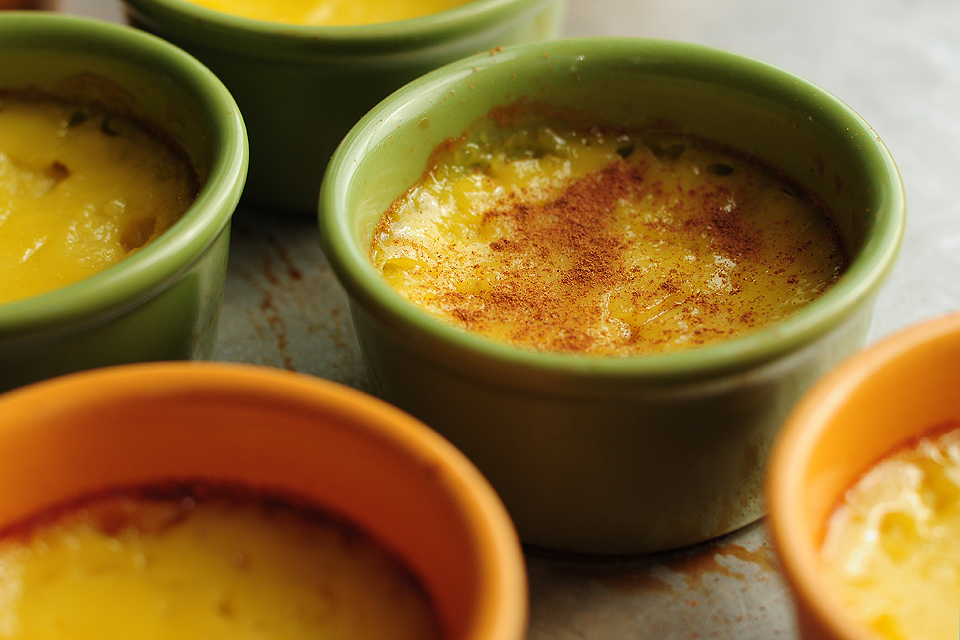 I sprinkled a little cinnamon on top for a nice addition. 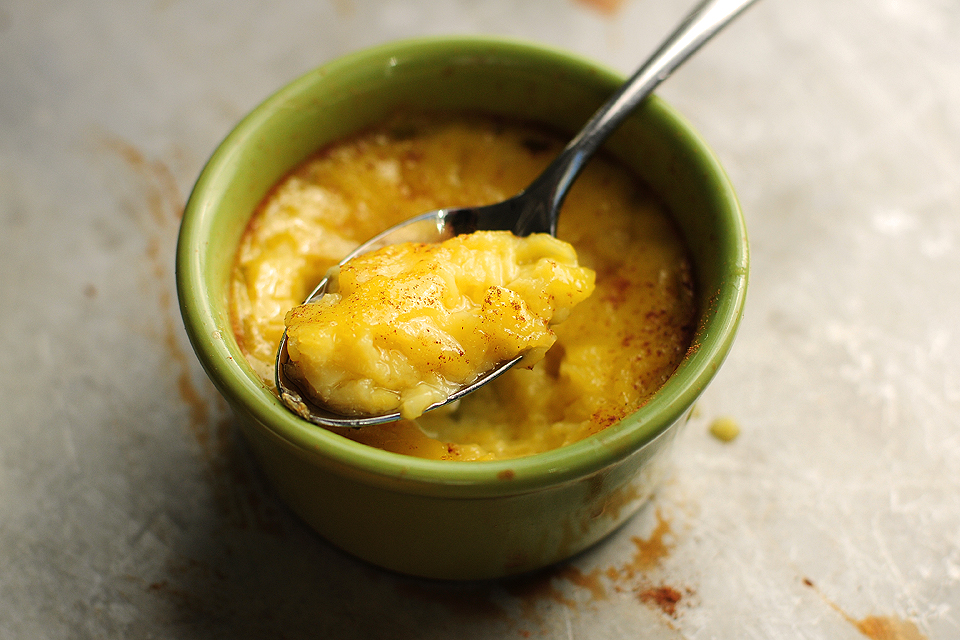 Such an easy recipe, but with simple additions, like berries, coconut, or chocolate, you could easily change this basic recipe for year-round goodness.

Thanks to Kristy for bringing this delightful (and easy!) recipe to our attention. It’s a keeper. And be sure to check her site Eat, Play, Love for this recipe (what a cutie patootie she has assisting on this one) and other wonderful offerings. 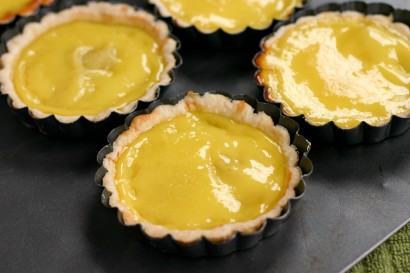 A traditional egg tart served in Hong Kong. It’s listed as #16 on The World’s 50 Most Delicious Foods as compiled by CNN Go.

Preheat the oven to 425ºF. Bring the water and sugar to a boil in a medium saucepan. Remove from the heat and set it aside to cool.

Next beat the eggs in a large bowl and add the evaporated milk. Pour in the sugar water and mix thoroughly. Finally, mix in the vanilla.

Place the tart shells on a baking sheet. Pour the custard through a sieve into the shells.

Bake the tarts at 425ºF for 20 to 25 minutes, or until the egg mixture has risen and the crust is golden brown.

I’ve never seen this recipe before. It looks incredibly good. I like the idea of the flavored tarts too.

I went to 3 stores looking for mini pie/tart crusts and couldn’t find them….so I bought mini Phyllo pastry shells…..what a mess!!! The egg filling leaked out of the bottoms before I could pop them in the oven…..oh and I used Splenda and Fat Free Evaporated Milk. Even though they were a mess, they were yummy. I’m going to be on the look-out for the mini crusts from now on!

These sound so tasty!

I have never heard of this. I can’t wait to make them. My husband will wonder what’s going on between the delicious chocolate pie and now this….fun weekend of sweet indulgence . I guess we will hit the gym hard Monday

These look so good! I’ve never heard of them before, will have to try.

I love egg tarts! It’s one of our favorite dim sum items to get, except, if we eat dim sum too late, it would be sold out. If you don’t see egg tarts in your dim sum restaurant, then they must have sold out. If they don’t even sell it, the restaurant must have limited offerings. Egg tarts are pretty standard. There are various recipes out there to make egg tarts. Not all the same and produces various results. I like the simplicity of the ingredients posted here. For the original version of an egg tart, the crust is more akin to puff pastry, with the many various layers, and not like pie crust or tart shells. And the texture is like a custard pie. Many dim sum places are offering the egg tarts in pie crusts now because it’s easier. But the key factor is to get the egg part correctly. Your picture looks awesome. For the authentic version, don’t adorn it with anything, even nutmeg. Chinese people don’t use nutmeg. The nutmeg version would not be an egg tart, but custard pie, which I also love and use a friend’s recipe from Hawaii. The blogger who posted this recipe, if you read her post, topped it with whipped cream and blueberries, which, again, an adornment that Chinese people don’t use, and not on an egg tart…perhaps on a fruit tart, but not egg. Thanks for the post, love the simplicity of it all!

Dan tats! Oh, this is awesome — I’m so gonna have to make these!

Those look swoon worthy. I think I may give them a whirl!

What a wonderful surprise today! Thank you so much for mentioning our blog in your post today. I’m so glad you enjoyed the egg tarts. Thank you!

Dan tat! My favorite! Thank you so much for posting this recipe! As soon as this darn diet is over, I’m making these.

Thank you for the smile you brought to my face today! I love egg tarts, but mostly it was the memory of time spent in Hong Kong over 7 years that made me smile. Egg tarts were one of my favorite treats. I can’t wait to try this recipe!

For a totally different taste, add a pinch of fresh nutmeg. Always good with egg.

I adore egg tarts, but I’ve never found a recipe to make a home – these though will be made very, very soon.

Really wish there was a crust recipe. That is the hardest part of making dan tat. I remember making it with my mom growing up but she lost the recipe in hurricane Hugo.

i grew up eating these and have never thought to make them on my own!

These look great! My husband lived in Hong Kong for 5 years when he was a child. I wonder if he had these. Unfortunately, he’s allergic to dairy, but coconut milk might sub in beautifully. I know it does in the vodka sauce that I make ( http://lollingabout.wordpress.com/2012/05/18/foodie-friday-vodka-sauce/ )

Hmm….I dont think Ive ever eaten one of these though I think I remember seeing them when we go eat Dim Sum. Ill have to try it.

Oh, Amy…. you don’t even know how excited I was to see these. Hong Kong egg tarts are one of my favorite foods of all time. Whenever we visit a city with a Chinatown, these are the first thing I look for. In San Francisco, I once ate these every day for lunch for a week. I never tire of them. And if you can find them warm from the oven, they are heaven on earth. Thanks for making my day!

The photo intrigued me – so I had to look at the recipe. Sounds delicious – looking forward to making some thios weekend!