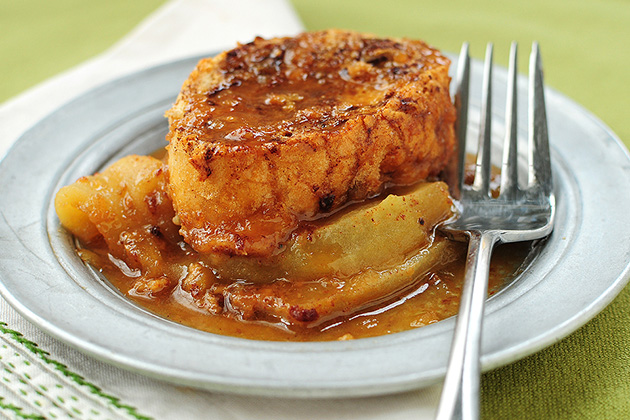 Holidays are here and while we’re all planning for the big meals, what about breakfast? I don’t know about you, but I think about lunch and supper menus and then totally forget about breakfast until the last minute. And breakfast is important, especially if your family tends to eat a late lunch like mine does. This Apple Bourbon French Toast Casserole recipe, submitted by Tasty Kitchen member Courtney, caught my eye as perfect breakfast option for those busy holiday mornings, because it can easily be made ahead and popped in the oven when the sun comes up.

It’s a wonderful mix of apples, brown sugar, cinnamon, with a splash of bourbon. Quite honestly though, it would make a perfect dessert. Or just think, leftovers from breakfast can be enjoyed for dessert later that evening. So is it breakfast or dessert? Breakfast? Or dessert? Or maybe a new Tasty Kitchen category altogether: Bressert. I’m going to talk to those in charge around here about it. I think Ree would agree. Bressert. It’s a good thing.

So let’s get started on this bressert thing. 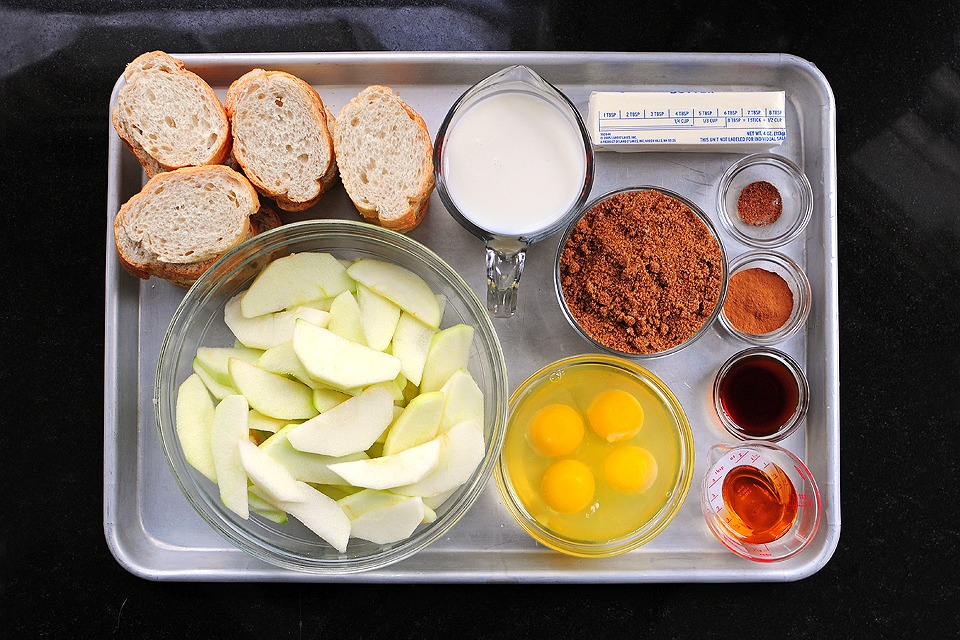 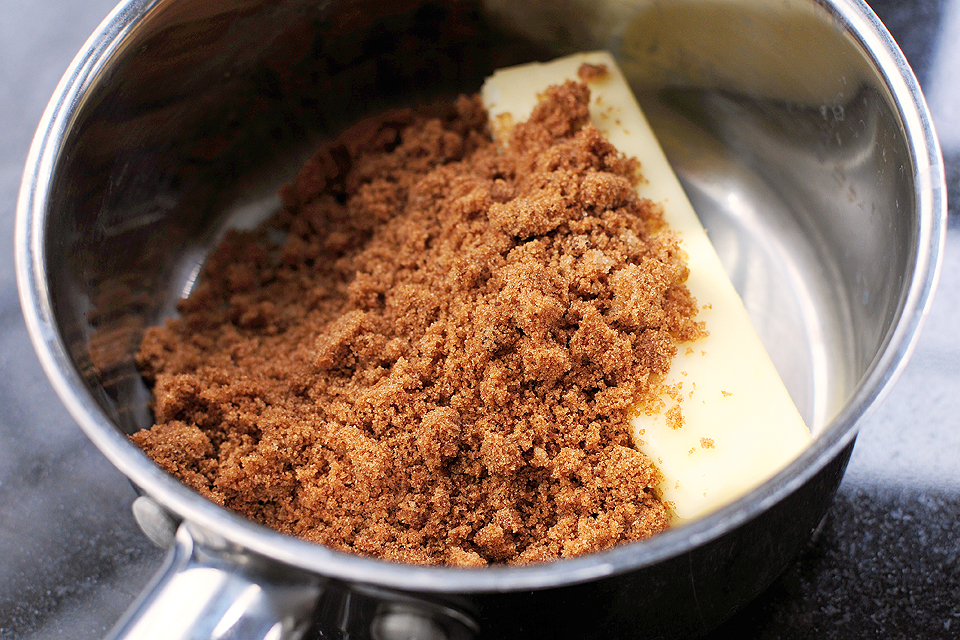 Begin by melting the butter and sugar together in a small pan. 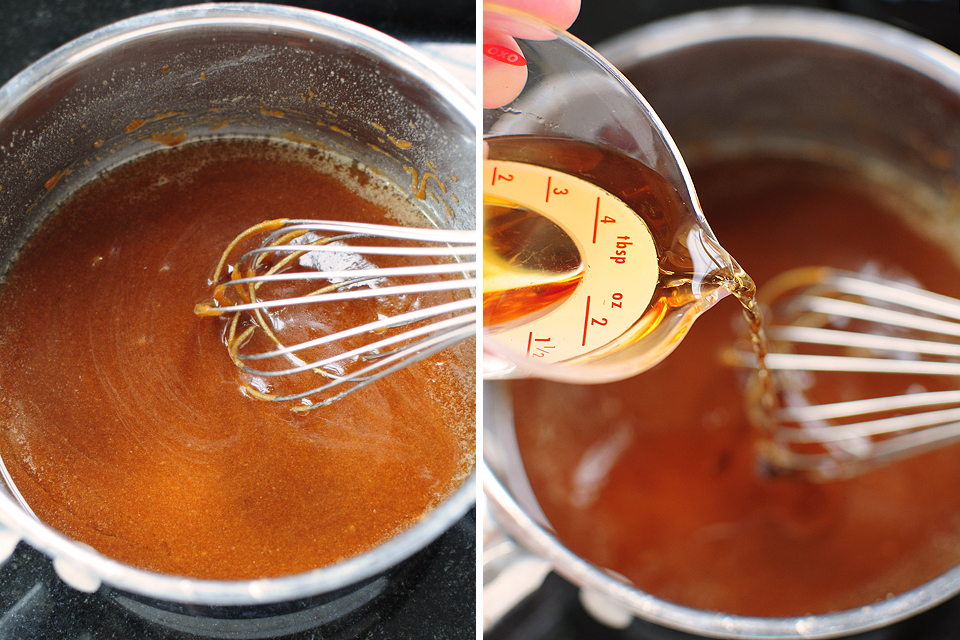 Whisk it together to combine. Whisk in the bourbon and cook until slightly thickened. 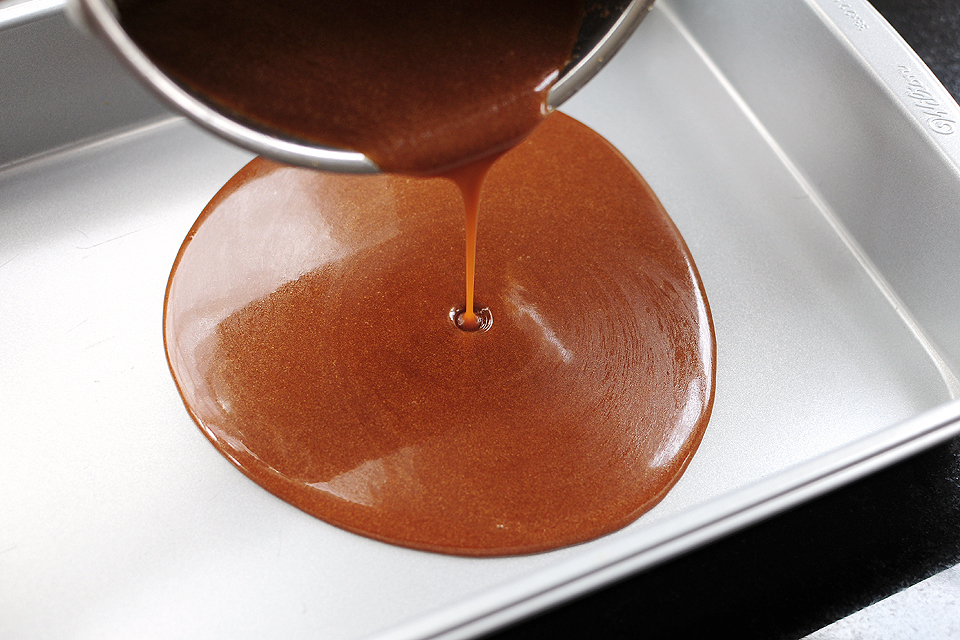 Pour the butter/bourbon mixture (otherwise known as delicious goodness) into a baking pan. 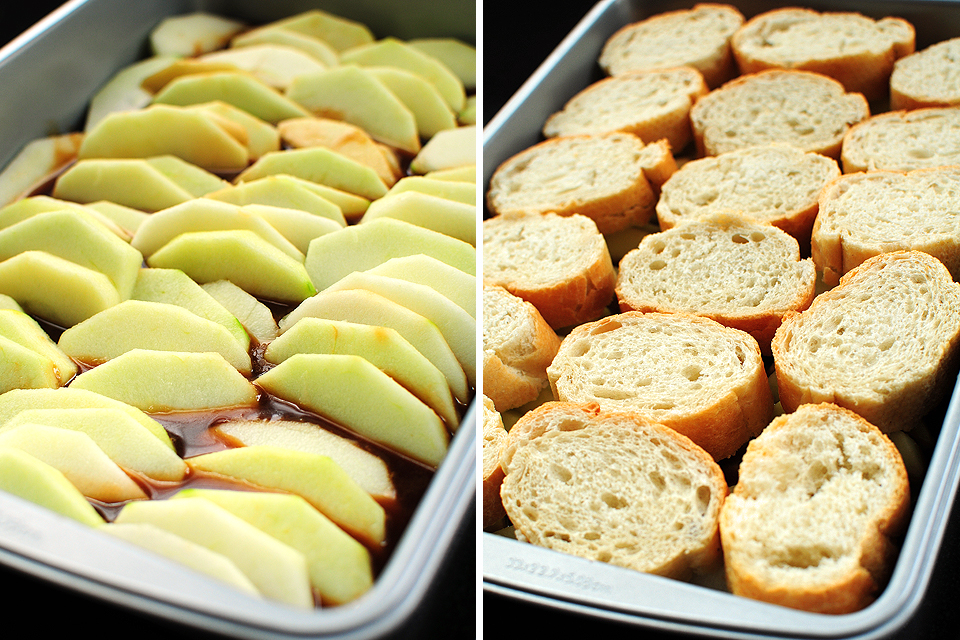 Top with sliced apples. I cut my apples pretty thin, but you can do whatever you like. Diced apples would be nice too. Add the sliced bread in a single layer on top of the apples. 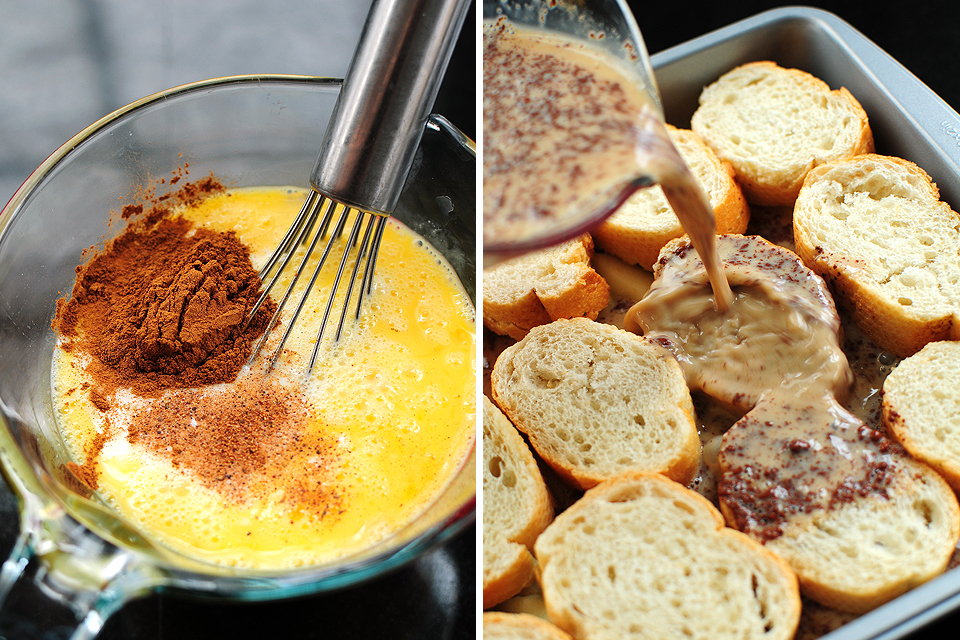 Beat together the eggs, milk, vanilla, cinnamon and nutmeg. Pour the egg mixture evenly over the bread and let it soak in.

You can either cover the dish and refrigerate it overnight. Or, if you are not making it ahead of time, dip bread slices in the egg mixture before laying them in the pan, then pour the remaining egg mixture over the casserole. 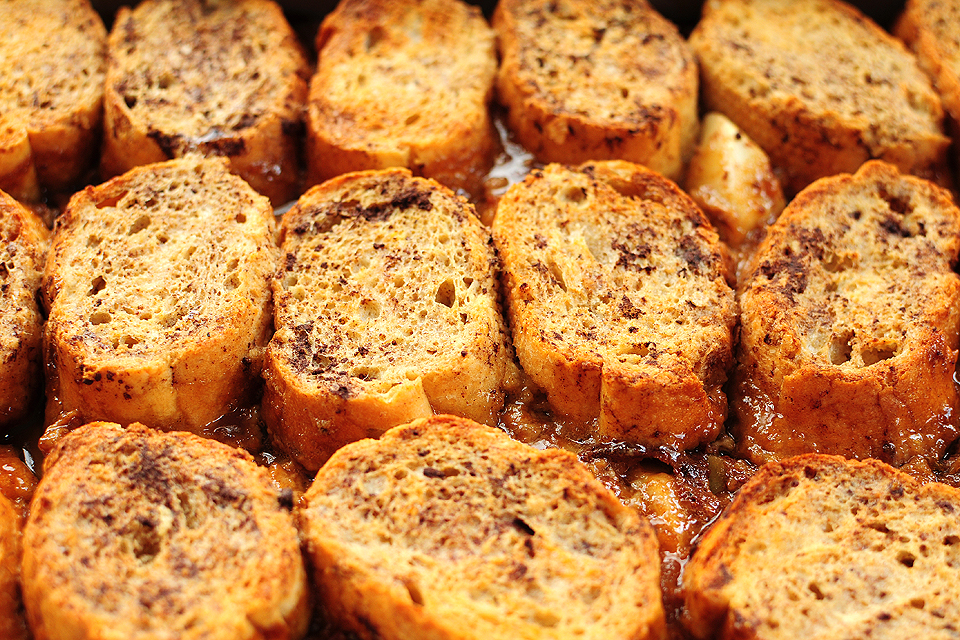 Bake it up! It turns a lovely golden brown, with a crusty top, and an ooey, gooey, sweet bottom. 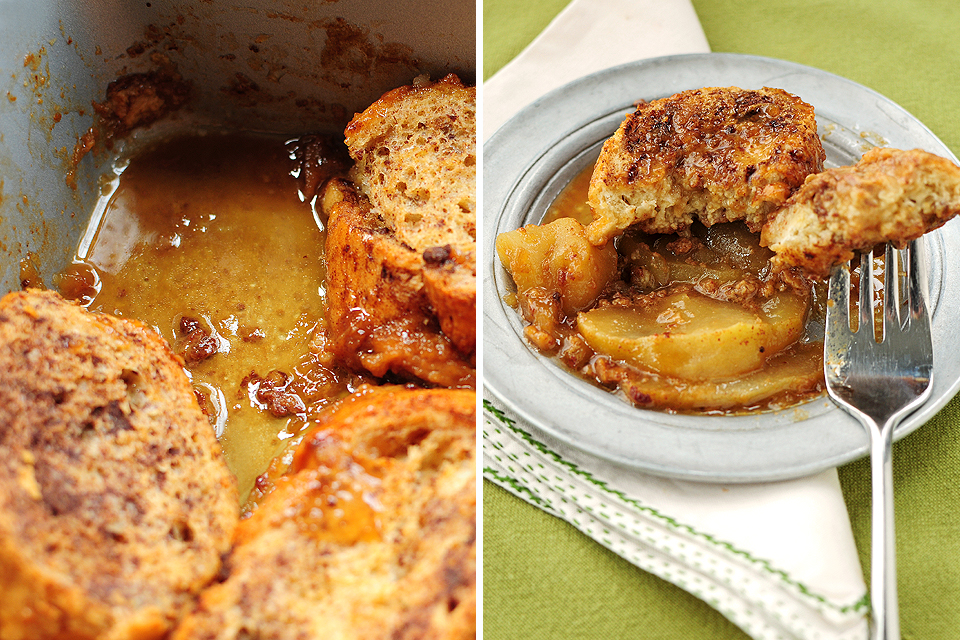 Look at the delicious goodness at the bottom. YUM! What better way to start—or end—the day. The perfect bressert, I’d say. 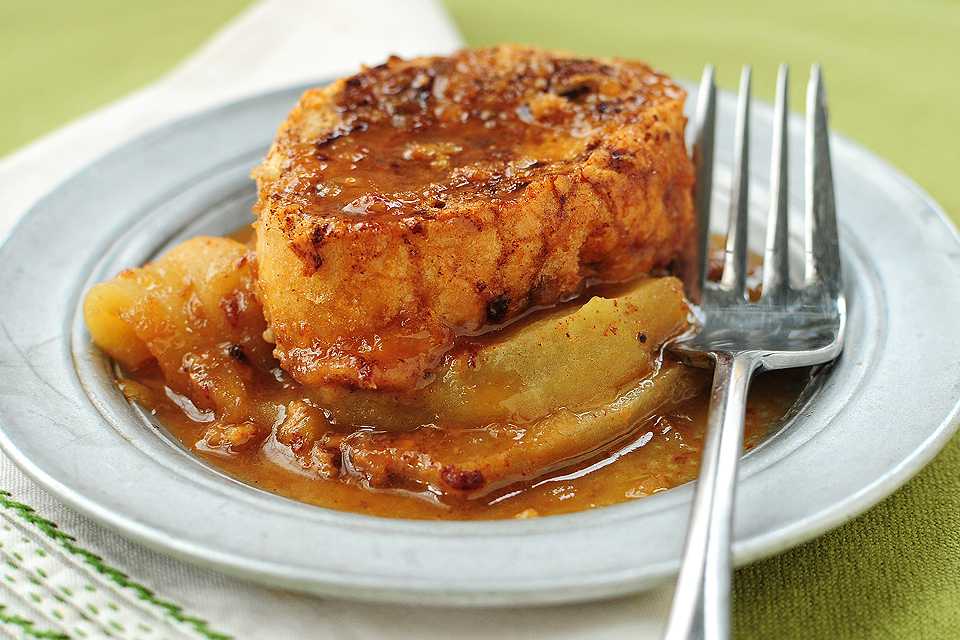 A big thanks to Courtney for submitting this recipe. It’s going in my bressert file for ever and ever. Which pretty much is in keeping with the name of Courtney’s blog: Bake. Eat. Repeat. 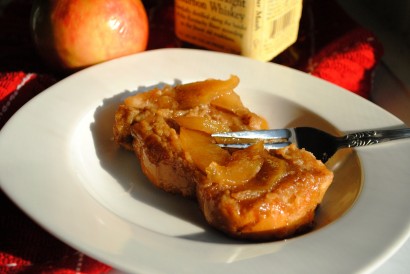 1. In a small pan melt butter and sugar together. Whisk to combine. Cook until slightly thickened. Add bourbon and whisk again. Continue to cook for about 1 minute.
2. Pour butter mixture into a 9″ x13″ pan. Arrange sliced apples on top.
3. Arrange slices of bread on top of apples.
4. In a large bowl, beat together eggs, milk, vanilla, cinnamon, and nutmeg. Pour mixture over bread.
5. Cover dish and refrigerate overnight (see note below). In the morning, place casserole dish in the oven. Heat to 350ºF. Bake for 45 minutes to 1 hour, or until apple slices have softened and bread is golden brown.

Note: If you are preparing the casserole the morning you are serving it, dip bread slices in egg mixture before putting them in the pan. Pour remaining egg mixture over the top of bread slices. Bake at 350ºF for 40-45 minutes.

I made this Christmas Eve for our Christmas morning breakfast. It was FABULOUS and loved by all – including two picky three-year-olds, my husband and my Mother. Like I’ll-definitely-make-it-every-year fabulous. Thanks for this recipe!!

Made this for Christmas breakfast and was a hit! I added toasted pecans to it on my plate and it adds another layer of flavor (and crunch) that makes it even more divine!

This recipe is incredible. I have made it three times since it was posted and have received rave reviews from everyone it was served to. I increased the amount of apples, which created more of an apple syrup that can be spooned over the top of each individual serving.

My teeth (which are cavity prone) just jumped out of my mouth and ran away as fast as they could. But oh my, I would love this with a cup of coffee and some maple bacon on the side!

This would be a fantastic recipe to serve for brunch. Thanks for the post.

OHHHHHHHHH and I forgot to say that for anyone of you on the fence because of the bourbon ( notice I actually spelt it right this time, lol ) I am not a alcohol person whatsoever and certainly not anything as strong as bourbon or whiskey!! You do not even taste any alcohol the bourbon just enhances the other flavors. It really is delicious…. I agree with the baguettes too ( that was what I used )

WOW!!!! I made this for our breakfast yesterday morning. I figured I would try it because you could make it the night before and knew we would be busy, busy preparing Thanksgiving feast. Girlfriend this recipe is out of this world DELICIOUS

Will definitely be on the list for Christmas morning too!!! I think I am going to try adding some homemade maple syrup in with the borbon next time see what that does. But for anyone checking this recipe out it is great and it is soooooooooo easy, try it, trust me you will like it.

Well, ya might as well stick a fork in me and kill me now, ’cause this Ozark Farm Chick is done!!!! Wow, now that’s a dish I can take to a church brunch!!!! Heeeheehehe!!! :o)

Girl, I can almost smell the cinnamon arisin’ from the computer. Ya got my tummy rumblin’ and my mouth droolin’ like a rabid dog!!! Mmmmmmmm, thanks for this recipe!

From the wonderful hills and hollers of the very thankful Missouri Ponderosa, ya’ll have a blessed and beautiful day with your family tomorrow!!!! :o)

Wow, does this ever look good. What a great way to start the day! Love that this french toast is filled to the brim with goodness and baked in the oven!

We make a variation of this for holiday breakfasts every year, but with crasins mixed in with the apples and no bourbon. It’s my favorite part of Christmas

I’ve made a similar dish with pecans only, no apples or bourbon. Not being much of a hard liquor drinker, I have no bourbon on hand. How would this be with no alcohol? Would you even need to have anything else? This would be great for my house guests Sunday morning.

First, your pictures are SO TEMPTING … you know you’re a great food blogger when I literally want to eat my computer screen :$ lol

This is a fantastic recipe… perfect for christmas morning (or maybe tonight for dinner :$)

How is this not in my life right now? I would give a body part to have that for dinner. And yes, I said dinner.

Sounds like this would be great the day after Thanksgiving with any bread that survived the big meal. Looks awesome!

Can I have some now please?
Swoon

YOU my love are brilliant. *Bressert*?!? Just saying that makes me smile.

And this bressert looks amazing. I should be able to indulge seeing that I’ve just left the gym, right?

Bressert! LOVE IT! This looks amazing!

Instead of thick sliced bread, I used thick sliced baguette pieces which are smaller, requiring more pieces. I think 6 slices of regular thick bread would be close to covering the whole baking dish as well.

I’d like to substitute apple cider for the bourbon……any other possibilities?

oh my goodness, this looks divine!

??It sounds yummy, but says six slices of bread–when the picture shows as much to cover the baking pan. Please clarify.

It looks perfect for a holiday breakfast.

Holidays? I’d like to have this for breakfast TODAY… on a random Monday please. Holy cow!