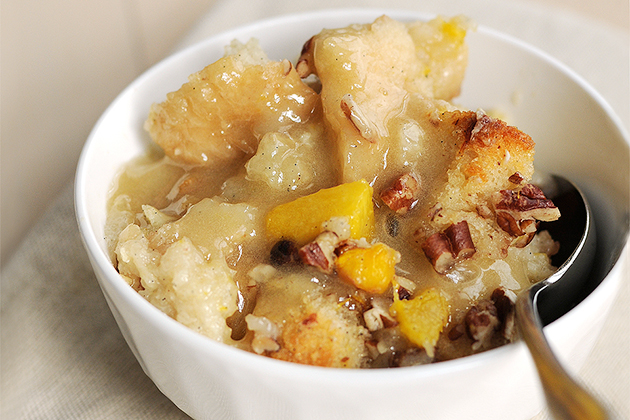 Tasty Kitchen is such a fun online community. Discovering delicious recipes is great, but what makes it even better is making new friends. Each time I find a recipe here on Tasty Kitchen, it’s as if a new friend has invited me into their kitchen, into their home, for a peek into their lives through my taste buds. That’s pretty cool, I think.

Take Marvin, for example. Marvin and I have been friends for a while now (he just doesn’t know it). I’ve had his recipes bookmarked, and know all about him and his wife, Jane, on their blog. They’re a talented couple of artists from Texas. Marvin doesn’t know me from Adam. But I know him. I know him and his Peachy Bread Pudding.

Marvin is the type of guy you’d want as a next door neighbor. The neighbor you casually drop in on because maybe the wafting aroma of his Peachy Bread Pudding or Sausage and Potato Bake caught you up in a trance that propelled you to his front door with the excuse of needing to let him know that in a few months you’d be going out of town for a day and … “What’s that Marvin? Is that bread pudding I smell?” Yep, he’d make a darn good neighbor I say. Maybe one day we’ll meet in person, and I can thank him for sharing his delicious version of Peachy Bread Pudding. But until then, knowing him through Tasty Kitchen will do just fine. Just fine indeed.

Wanna get to know Marvin a little better too? Let me show you his Peachy Bread Pudding, and y’all will become the best of friends in no time. It’s a really marvelous dish by Marvin. The sauce alone is a keeper to serve with many other desserts. Just perfect! Let’s get to it. 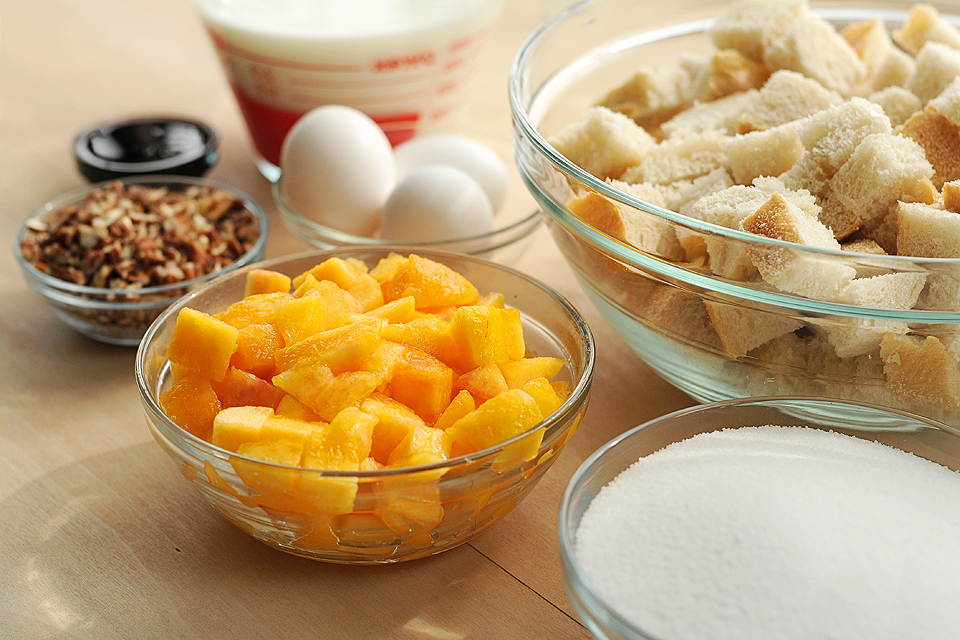 For the bread pudding you’ll need: eggs, melted butter, vanilla, half and half or milk, sugar, fresh peaches, sourdough bread and pecans. 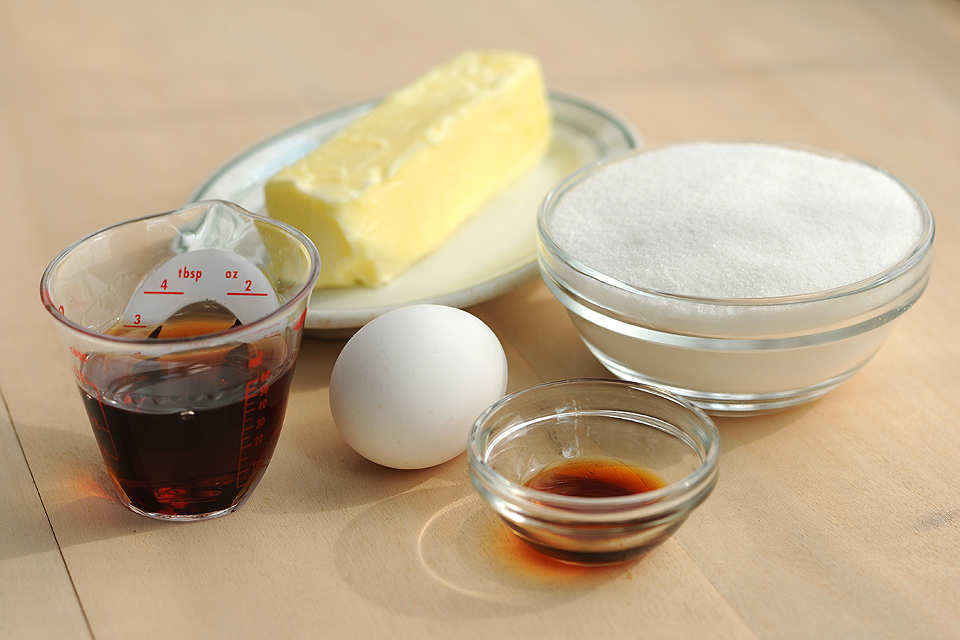 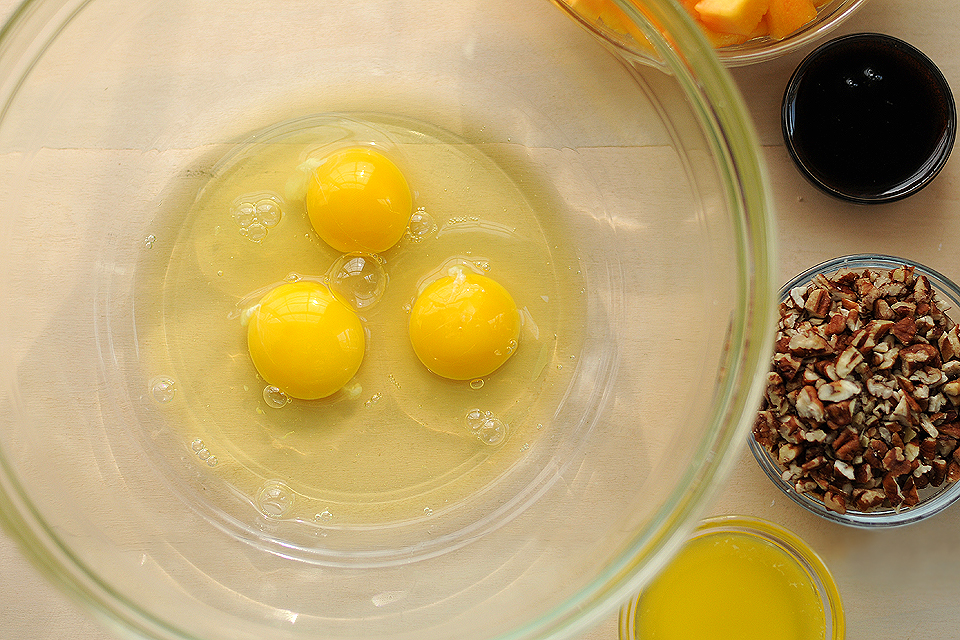 To prepare the bread pudding for baking, add the three eggs to a large bowl. 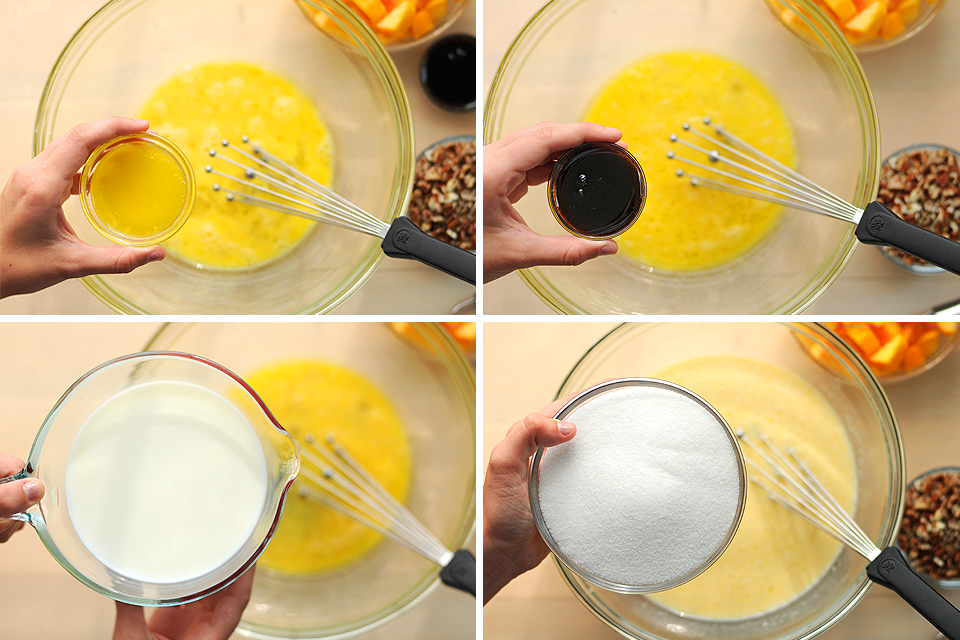 Next goes in the melted butter, vanilla, half-and-half (or milk). Combine those well first, then add the sugar. 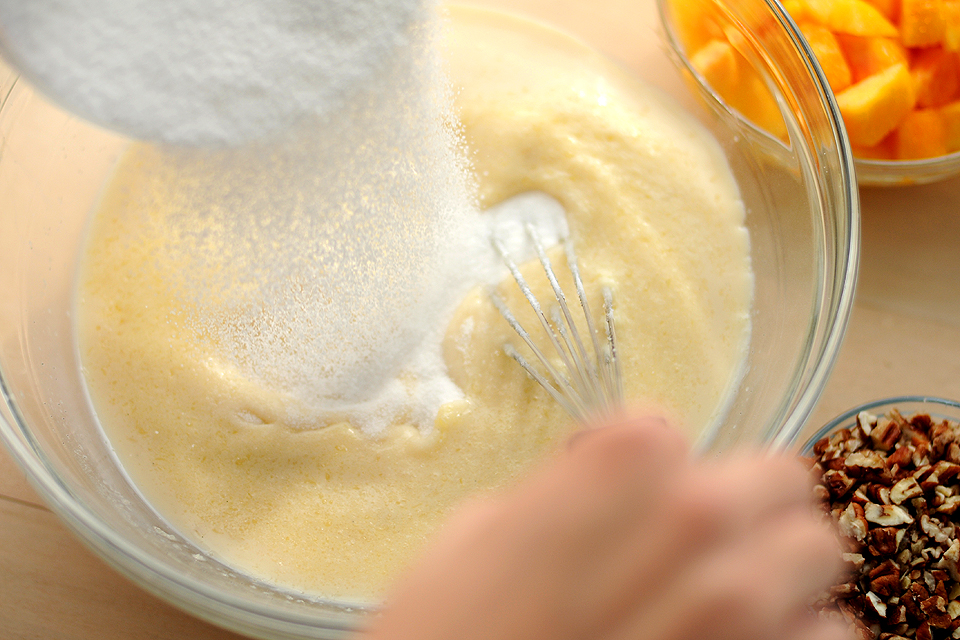 Add the sugar slowly, stirring as you go until the sugar is dissolved. 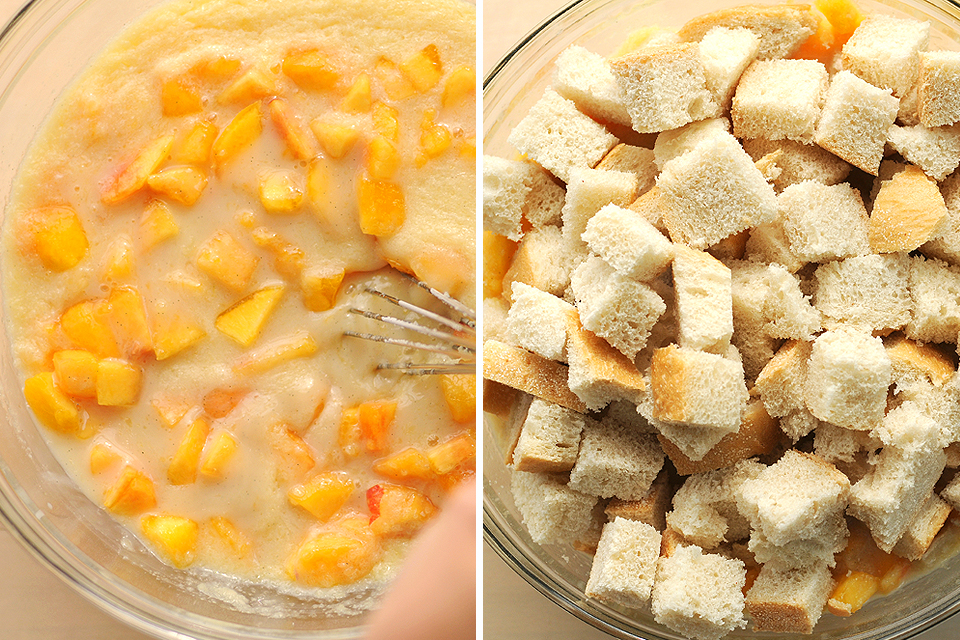 Now, the lovely peaches (nectarines will do too!). Mix it up. And finally, the bread. 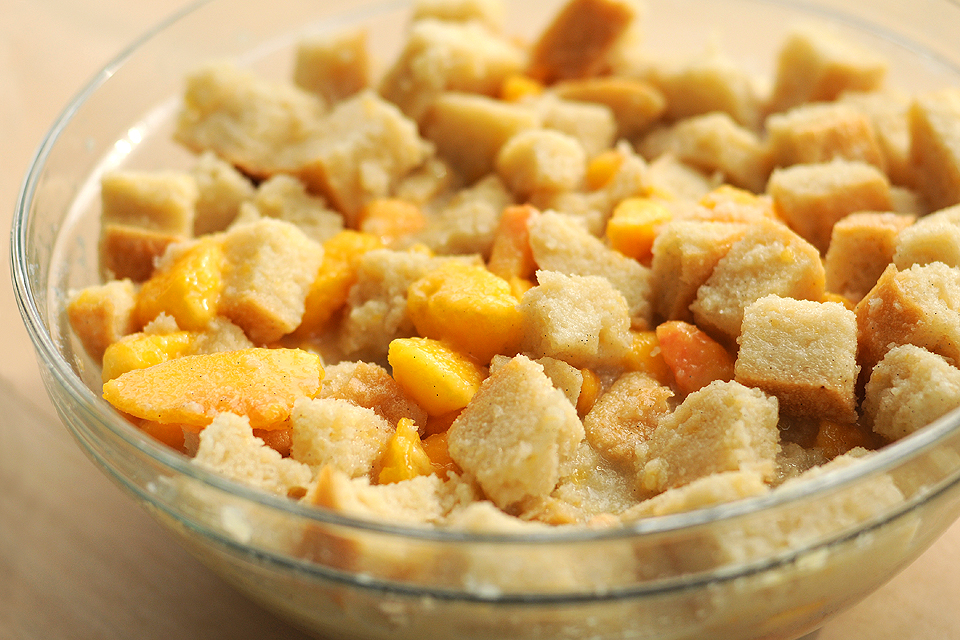 Gently push the cubed bread down into the mixture so it can soak up all the goodness, like little sponges. Let it soak for about 30 minutes.

It’s not shown here, but butter the dish you’ll be baking the bread pudding up real good, ya here? It helps to avoid sticking and adds some more flavor, too. 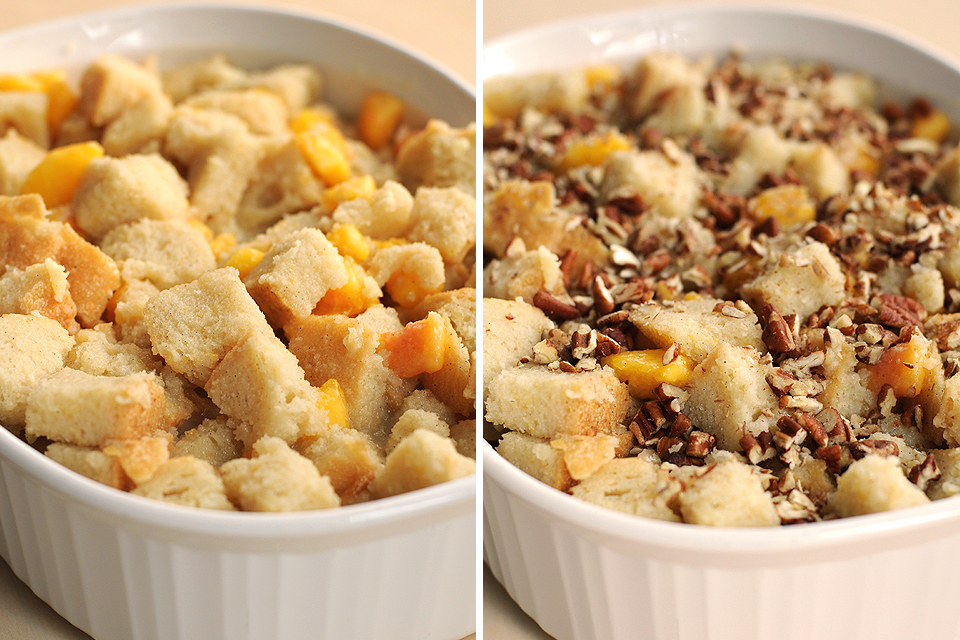 After the bread has soaked, spread the mixture into your baking dish and sprinkle with the chopped pecans. Bake uncovered for 50-60 minutes. 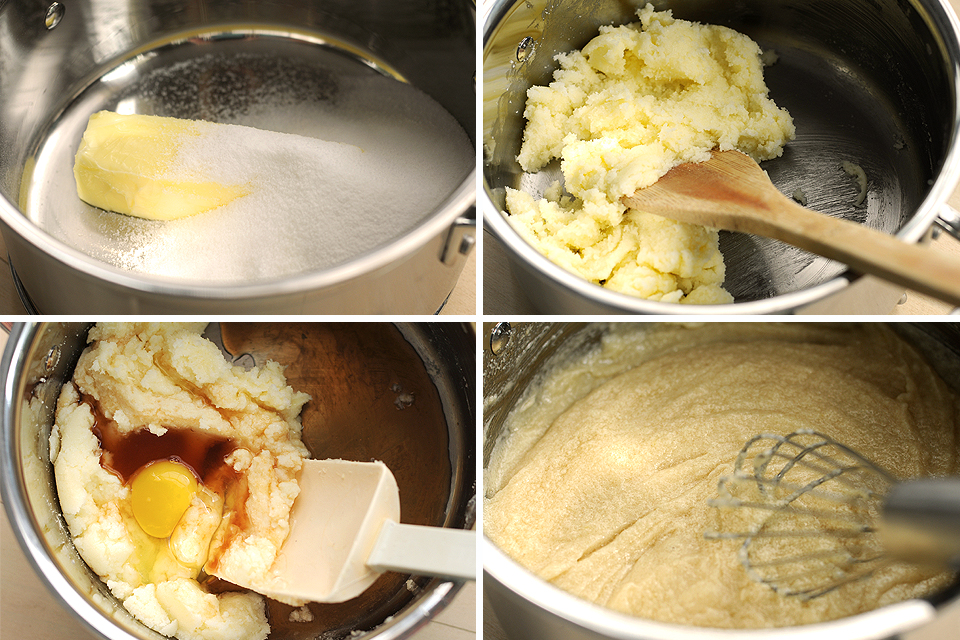 While the bread pudding is baking, put together the sauce. In a pan, cream together the softened butter and sugar. Add the vanilla, egg, rum and combine well. 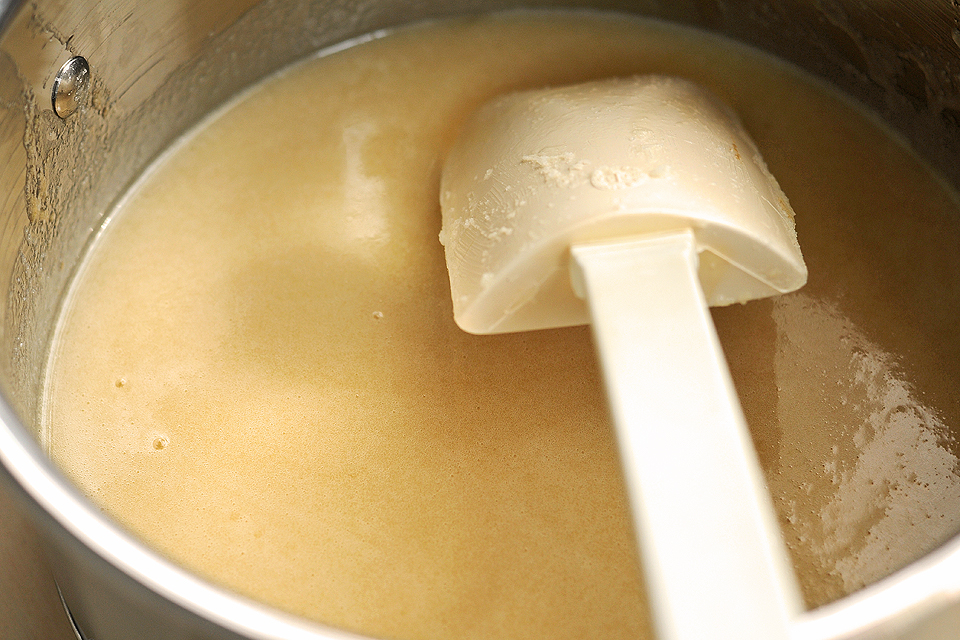 Over low-medium heat, stir for about 5 minutes until sugar has dissolved and the sauce is smooth. Like I said before, this sauce is something you’ll want to remember for other desserts. It would be the perfect complement to pound cake, or as an ice cream topping. Seriously tasty! 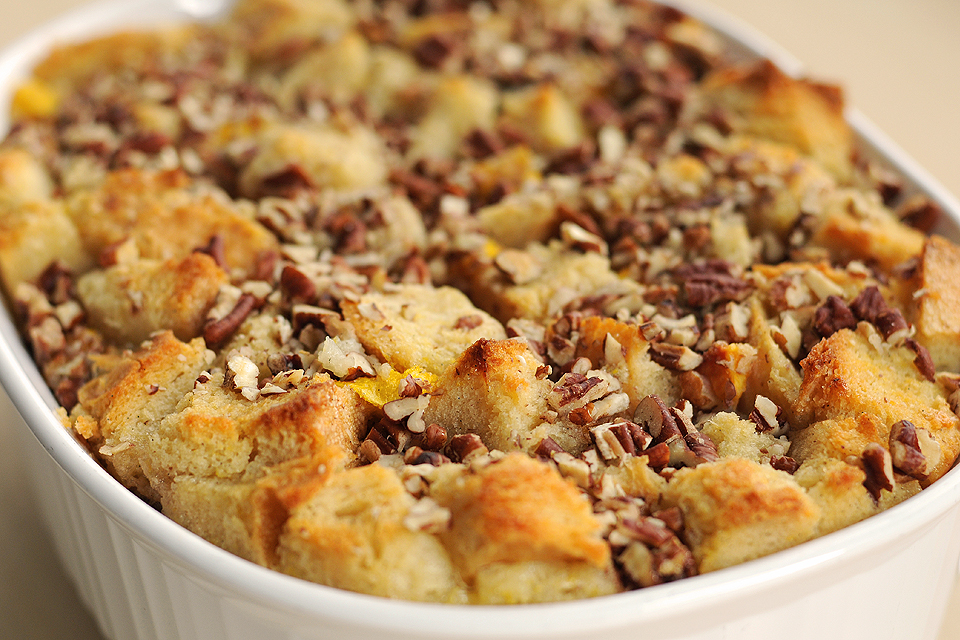 Back to the oven. You’ll want to check the bread pudding for doneness in the center with a knife. If it comes out clean, she’s done; if not, keep her cooking. I had to add about 10-15 more minutes to the baking time.

What a beautiful golden brown. And, oh, the aroma! 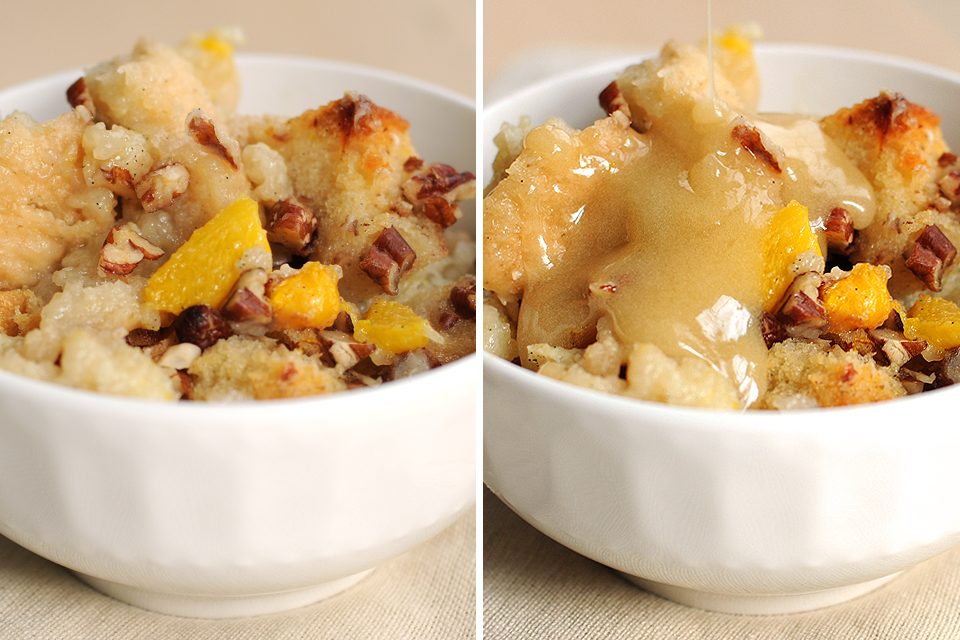 Serve warm, with some of the sauce drizzled over the top. 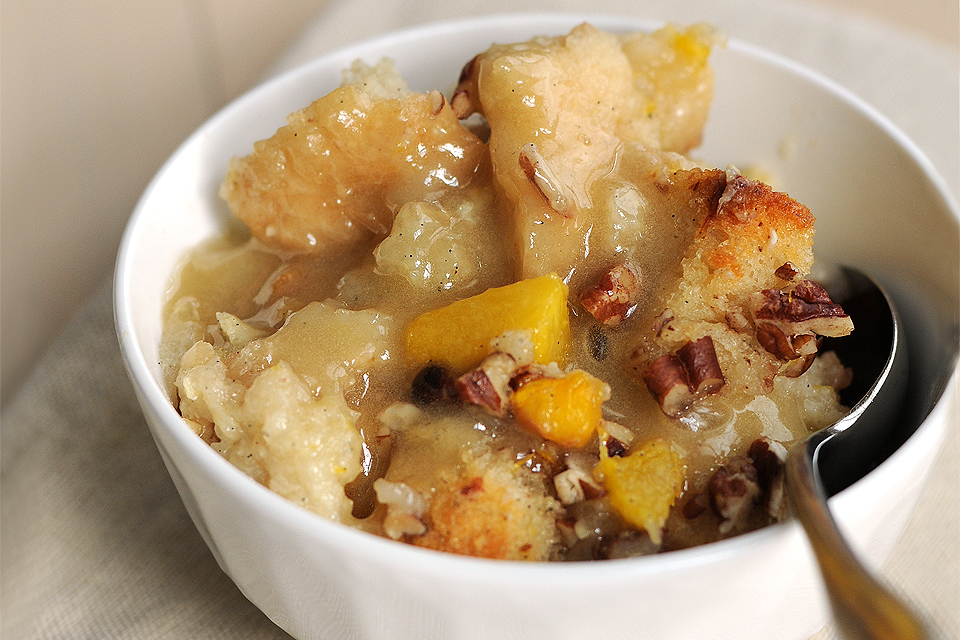 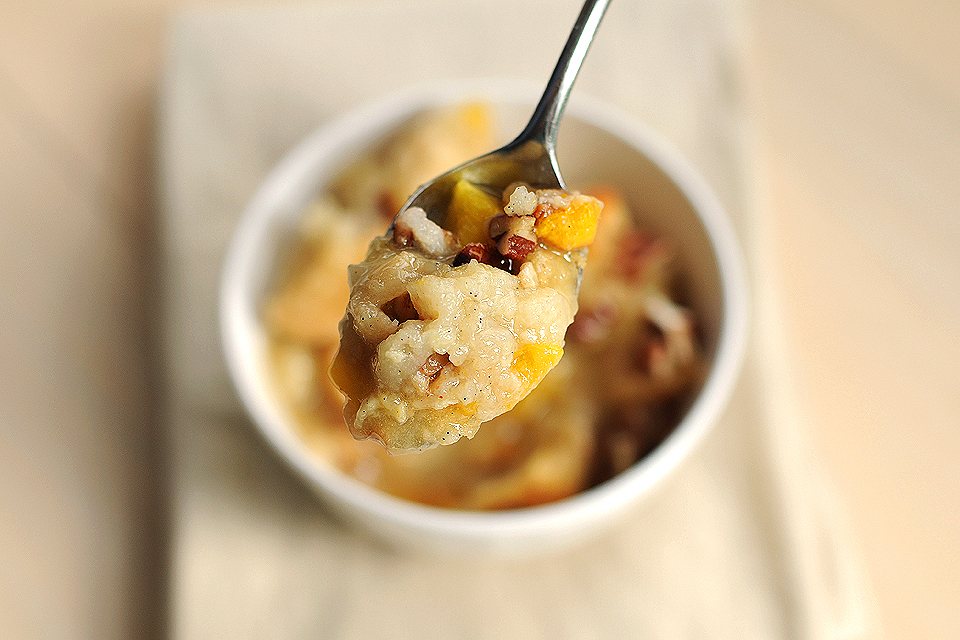 I was never a bread pudding fan, but that Marvin changed my mind with this one. He’s a good friend to have. Thanks Marvin! 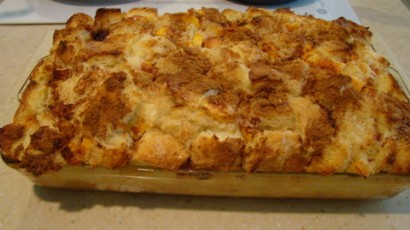 In a large bowl beat 3 eggs, add 3 tablespoons melted butter, 2 tablespoons vanilla, and 2 1/2 cups half and half. Add 2 cups sugar slowly, stirring until it is dissolved. Add peaches and bread, mixing well. Allow mixture to soak into bread 30 minutes.

Spread a bit of butter in a 9 X 13 X 2-inch pan or dish. Pour in the bread mixture, and sprinkle on pecans if using. Bake uncovered 50 to 60 minutes, or until knife inserted in center comes out clean.

My husband said “better than peach cobbler” and easier for me, plus it only took 2 big peaches. Thanks a whole bunch!!!!!

Today: My 1st time ever making and trying bread pudding. Love it!!

Easy recipe. Skipped the rum and used an Italian loaf from WF. Love peaches so I used about 3 1/2 cups. Agree that it’s a bit too sweet so I will minus about a 1/2 cup on the next go. This was so YUM for my 1st try! Thanks for the intro & Awesome photos Amy and Marvin Rocks.

Marvin is my new best friend!!! We made this last night, minus the rum, and it was spectacular!!! My husband said it was the best thing he has made in a long time, peach cobbler on steroids!!! HIGHLY RECOMMENED IT!

I think I picked that up at Bed, Bath, and Beyond. I think. It’s pretty nifty.

I love the little measure cup in the bread pudding..Looks like it is for teasoons and tablespoons.. Where can it be purchased…..thanks

We made this yesterday for breakfast. I had 4 peaches that were getting all wrinkly, but they were perfect in the recipe. I used 7 slices whole wheat bread, instead of the sourdough, used a combo of half&half and skim milk, and skipped the pecans. It was delicious. If anything, it was too sweet, so I think I might try reducing the sugar to 1 1/2 cups. Oh, since it was for breakfast, we skipped the rum sauce!

Made it as soon as I saw the post (and made the sausage/potato casserole too). Both are AMAZING!!!

We just had our Iron Chef peach cook off. Could have used this recipe last week. Still must give it a try. Yum!

This looks really yummy!. Thanks for sharing
The step by step is wonderful
Love from the north of Spain
Marialuisa

Love this combination. Can’t wait to try it. Thanks for sharing!

I love that you can swap out wit nectarines! Must make!

OH YUMMY! I wish I had a neighbor to brin some right NOW.

Delicious and your pictures….*sigh* they’re incredible!

Can you leave out the rum?

OOH! sounds wonderful, I am going to have to try this one.

Sounds like you and Marvin know a dang great treat when you see one. This bread pudding is a total win!

I LOVE cooked fruit and bread pudding as well!! Maybe I can be Marvin’s other neighbor! This looks fantastic!

Ohhhhhhh……Miss Amy!!!!! Thank you for a wonderful job with my Peachy Bread Pudding desert!!! How Complimented I am to be featured! It is a perfect presentation!!!
I may not be able to wear my hat for a while…….my head is swelled with pride. And of corse, drop by any time, my wife and I will be happy to have your company!

Oh Basak, a whole ‘nother world awaits you in bread puddings! A good project for a rainy day, search for “bread puddings.” I even have one with olives, bacon, spinach I serve sometimes at Thanksgiving. Enjoy.

I think I just discovered the recipe for what I will bring to our National Night Out Block Party tomorrow! I love, love peaches…and pecans! Thanks!

I planned on making bread pudding next weekend for company…now I will be making Peachy Bread Pudding. Yum!

Yummm! I love bread pudding. Peaches and pecans go so well together and the rum in the decadent sauce takes it over the top!

i’m gonna give this recipe a try!

All I know is that I love bread pudding and I love peaches and therefore will definitely love this!

…and to think that I just told my best friend that I was wouldn’t bake any sweets for awhile; I always share with her and her mother and we all need to lay off the sweets. But she’d make an exception for this, right?!? Bread pudding and peaches-one of life’s perfect combos. I am a sucker for a good peach and this recipe is calling to me to start the search for the perfect peach, again. Besides,
Marvin is a fellow Texan and I’m drawn to his art and his peach bread pudding. Thank you!

Anything with peaches and I’m totally hooked!
Hence why this:
http://lollingabout.wordpress.com/2011/07/27/wasted-wednesday-peach-slush/
is one of my favorite drinks. Oooooh peaches.

A friend of yours is a friend of ours ~ especially if he makes a good bread pudding!

I love Marvin’s recipes, and I would love to live near Marvin! Not only would I be dropping in for dessert, but I think I’d be sticking around for the stories. He seems like a very interesting guy. Thanks for spotlighting his peachy bread pudding. Your photos are gorgeous.

Never tried bread pudding before! I’m sure gonna try this one