Posted by twopeasandtheirpod in Step-by-Step Recipes 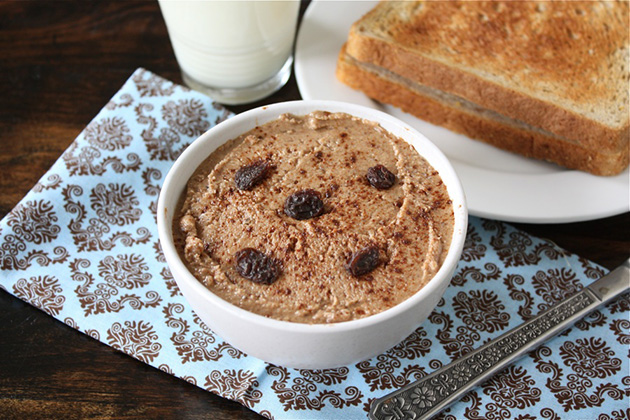 I am a huge fan of peanut butter, but unfortunately my husband is allergic to nuts. I try not to eat nuts around him because even the smell bothers him. I found this out when we were dating and I made peanut butter cookies. He said it would be fine but he was just being nice. He walked around the house with his shirt over his face and opened all of the windows. Oops!

Luckily, almonds don’t seem to bug him. He can’t eat them, but he can be around them. So I have become an almond butter addict. I love the stuff. So when I saw Brittany’s (TK member Eating Bird Food) recipe for Cinnamon Raisin Almond Butter I knew I had to try it.

There are only four ingredients needed to make this delicious almond butter: almonds, cinnamon, raisins, and vanilla. Anyone can make this recipe, it is almost too easy! 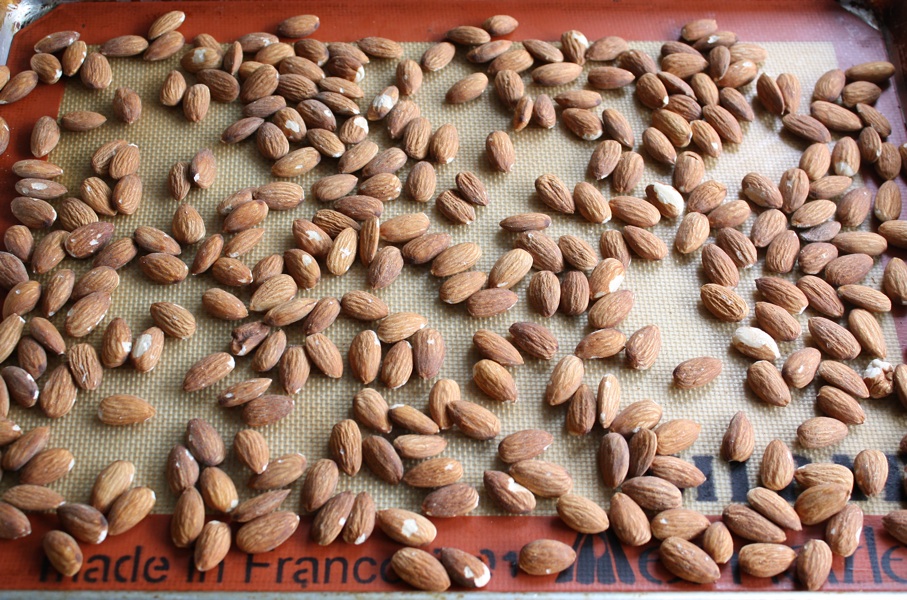 Preheat the oven to 350 degrees F and spread the almonds out on a large baking sheet. 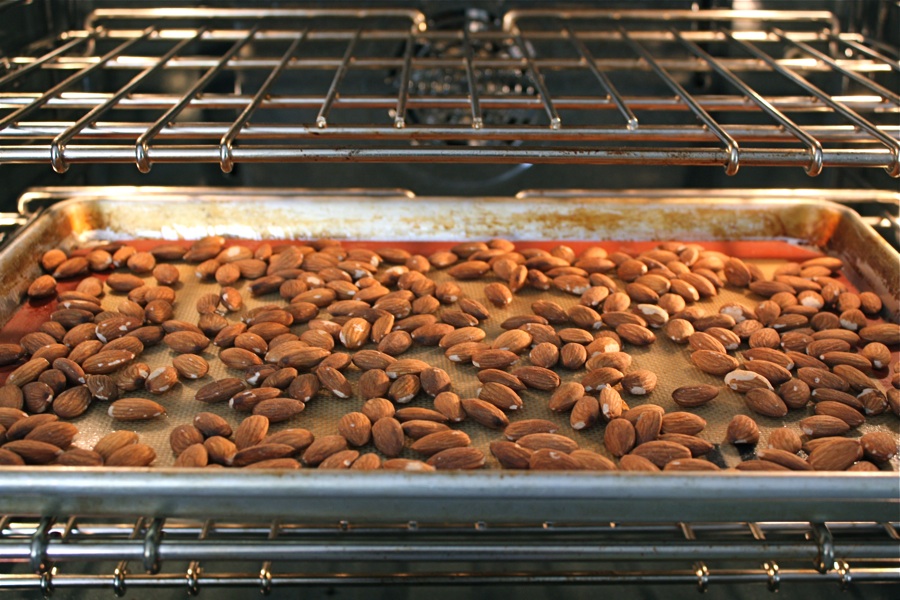 Bake for 10-12 minutes. Remove the almonds from the oven and let cool for about 20 minutes. 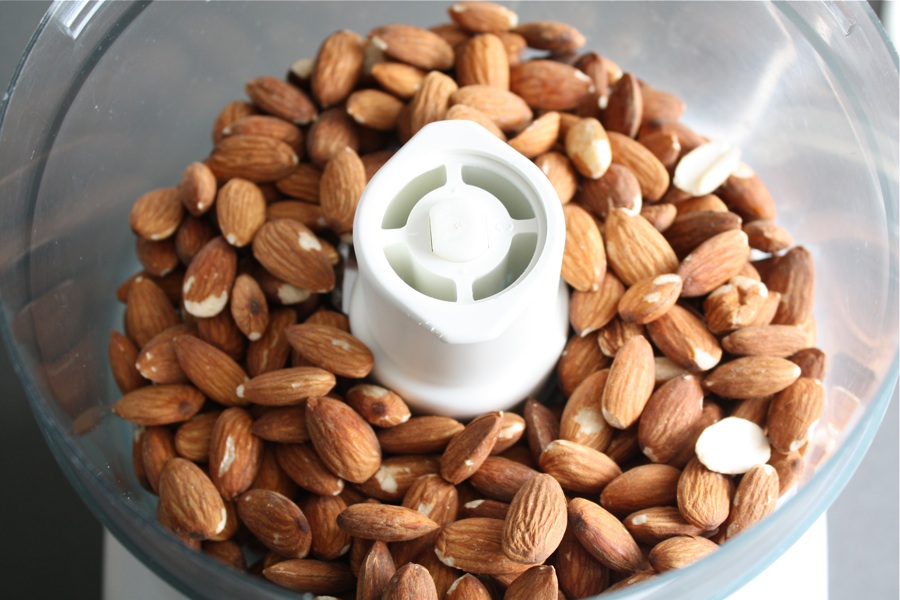 Place the roasted almonds in a large food processor. 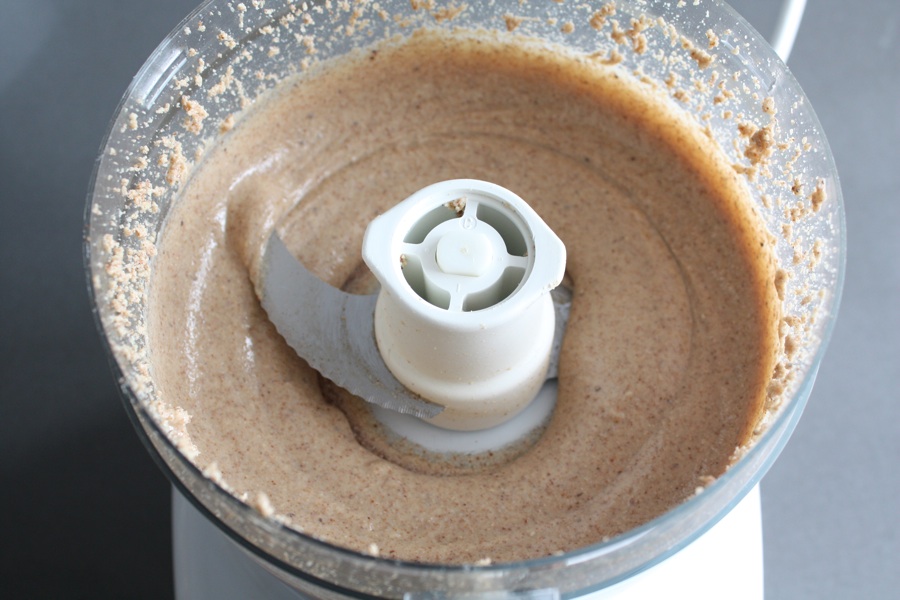 Process for 10 minutes, scraping down the sides occasionally.

Add the cinnamon, raisins, and vanilla. Process until smooth, about 3-5 more minutes. 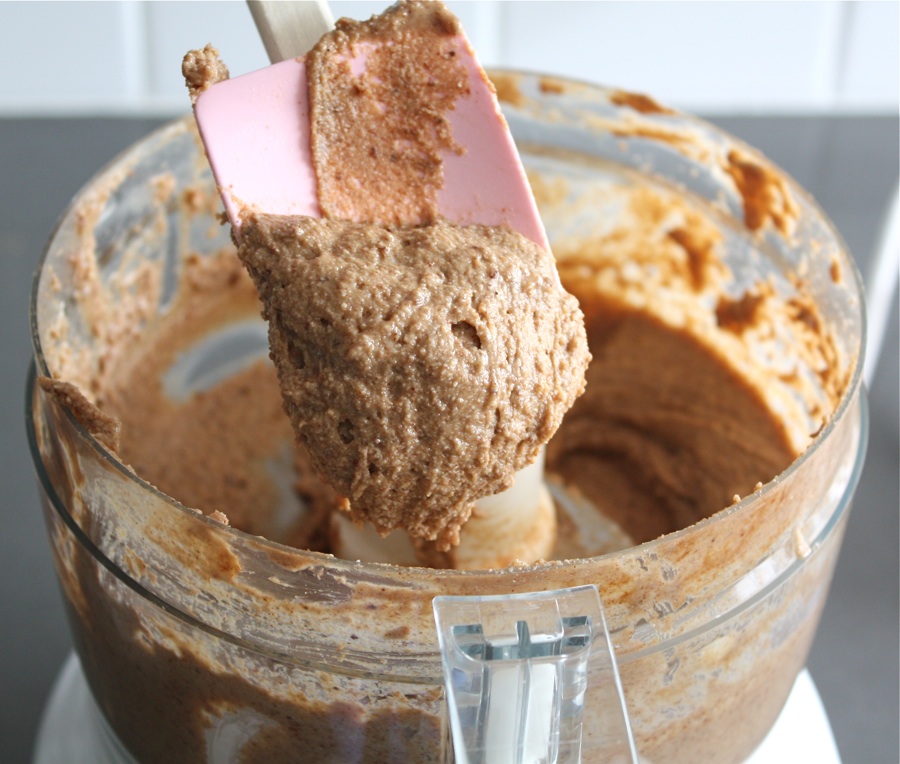 Remove from the food processor and enjoy! 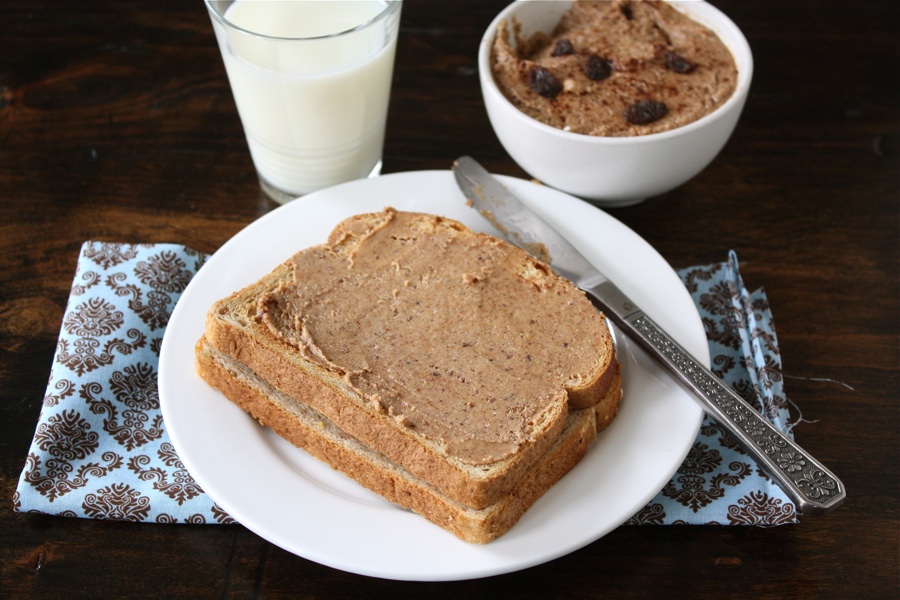 Thanks Brittany for sharing this fabulous recipe for Cinnamon Raisin Almond Butter. I am in love. Check out Brittany’s blog Eating Bird Food for other healthy recipes and tips. 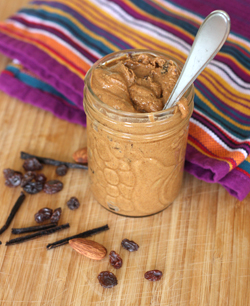 This nut butter is simple and delicious using only almonds, raisins, cinnamon and vanilla.

1. Pre-heat oven to 350°F. Spread almonds on a 9X13 baking sheet and bake for 10-12 minutes. Cool for 20 minutes or so.
2. Place roasted almonds in a food processor and process for 10 minutes, occasionally scraping down the sides.
3. Add remaining ingredients and begin processing again.
4. Process until smooth, occasionally scraping down the sides. About 3-5 more minutes.

Maria and her husband Josh (who she affectionately refers to as her “dough boy”) blog at Two Peas and Their Pod. They’ve been featured on Saveur, Eatocracy, Gourmet Live, Glamour, and the Los Angeles Times, to name just a few. We’re so glad to have them here!

I wanted to try this. I did try this. Mine did NOT turn out like that. I kept my machine going and going and the oils never made it creamy. It was just goo like…but not creamy goo like. I couldn’t spread the mixture at all. What did I do wrong?

And so sad that Josh has to miss out on something so scrumptious. : (

Hi Maria, Thank you so much for featuring my recipe in such a beautiful way. I’m glad you’re enjoying it and I think the idea of giving it as a gift is perfect!

Exactly how much does this recipe make? Enough to fill a pint jar? jelly jar?

Looks amazing! Would be delicious stuffed in French Toast with bananas.

This is brilliant. I always get fresh almond butter from my local PCC and at Costco but I love the idea of making it yourself and I’m sure the raisins put it over the top! I’m going to try it this weekend!

I also found it needs salt….not much…maybe 1/4 tsp….add a little and then try it. it really brings out the flavor:)

I made this last night and it turned out great! I am amazed at the good consistency w/out any oil….just wish it was a little more spreadable once it has been refrigerated! But I will keep working on it:) I had some for breakfast this morning…YUM:)

Wow! That looks amazing! Unfortunately, I am allergic to cinnamon….but I think it might be good without it!

YUMMM!!!! Can’t wait to try this, I’m a huge fan of almond butter, but our local store doesn’t sell it. Thanks!

We love almond butter at our house! I can practically *smell* it through my screen…

…and taste it melting into a pipping hot English muffin.

Also you may be interested to discover that peanuts are not actually a nut, so white your husband might have a peanut allergy, he might not have a nut allergy (or at least not all nuts). Almonds are also technically not nuts. We were brought up on lies lol

I’ve never had almond butter, but I love peanut butter. This is definitely one I’ll have to try….and give as gifts if I succeed!

I’m trying to make this now but it’s not getting creamy. I’m processing it to death and it’s sticking together but not at all spreadable. Do you have to have a high powered processor? I thought I had a decent processor but maybe I don’t. It tastes really great even though I can’t spread it.

Love this! I love almond butter and cinnamon raisin flavour, so this will be perfect!

I’m totally obsessed with almond butter. I think I might love it more than peanut butter. Yeah, I said it! I love the addition of cinnamon in this recipe.

wow this looks like such a delicious treat – i actually prefer almonds to peanuts so i am sure i will love this. And how wholesome to make it at home!

This looks delish! I just have a couple quick questions; how long can this hold in the fridge? Will the oils seperate if you don’t eat it in a few days? If anybody knows I would appreciate it! Unfortunately I live in a household who does not understand the delights of raisins or almonds. So I would be the only one enjoying its delightfulness!

I am so excited to try this!!! Many of the other recipes I have seen require some kind of oil to be added…I’m excited to try making it without any other added fat:)

How long does this last in a fridge? Sounds lovely!

So, I’ve never made my own nut butter, and I’m trying this right now and the consistency is not creamy. What did I do wrong? The taste is awesome, it’s just not creamy?

Beautiful post as always, Maria! We love almond butter, too! Until now I haven’t had a food processor that could handle processing nuts that fine. (And I think we’d probably go deaf because it’s as loud as a jet taking off.) Now that I have a nicer one, I’ll definitely try this!

Maria this looks like heaven! The last time I made homemade almond butter I couldn’t keep my paws off of it…I can only imagine this is going to be the case with this version

Could you freeze it?

Donna-I stored the almond butter in the fridge and it was fine for about a month. It might last a little longer, but I ate it all:)

I love almond butter, I enjoy the texture a bit more than peanut butter. I have been making my own and I sweeten it with a touch of honey. Adding raisins is brilliant – just smarty pants like. I can’t wait to make this!

This looks really good. You mentioned giving it away as gifts, can I ask how long it lasts??

I can sympathiza with your husband, being allergic to peanuts, and having to watch cross contamination, from nuts being processed together or on the same machinery. My boyfriend loves the homemade pecan treats I make from the pecans we get from our trees!