Posted by Ree | The Pioneer Woman in Baking, Step-by-Step Recipes

I was immediately intrigued when I saw the title of this recipe. Muffins that taste like doughnuts? Count me in!

About 3/4 of the way through the recipe, I realized that it’s very similar to an old recipe I picked up in my ninth grade French class: French Breakfast Puffs. In both recipes, you make a nice, basic muffin, then coat the muffins in melted butter and cinnamon-sugar when they’re hot out of the oven. Whoever invented such a delight should be sainted. 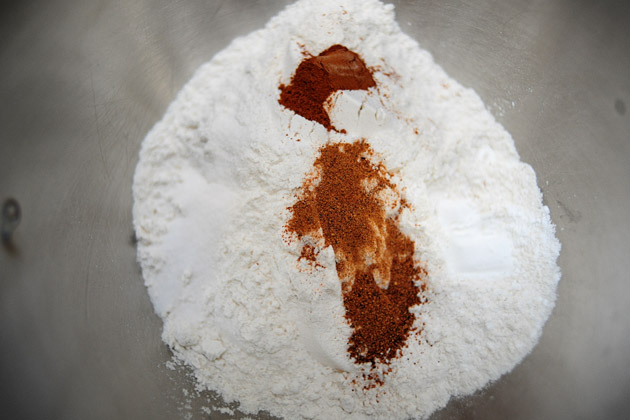 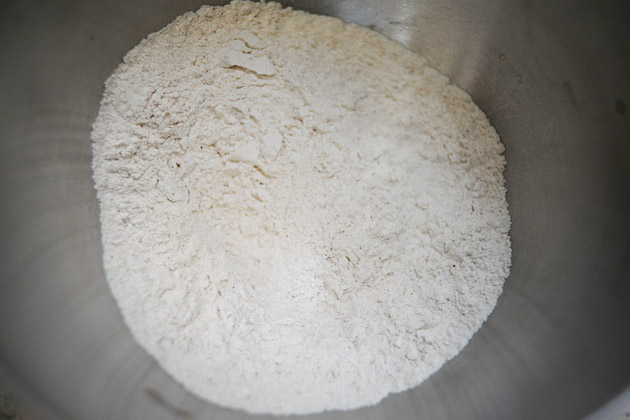 Stir it all together and set it aside. 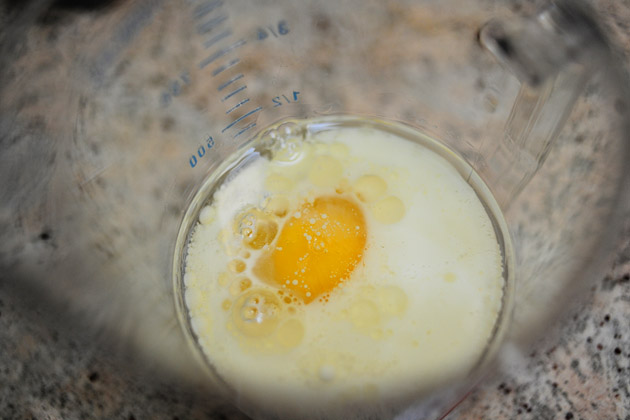 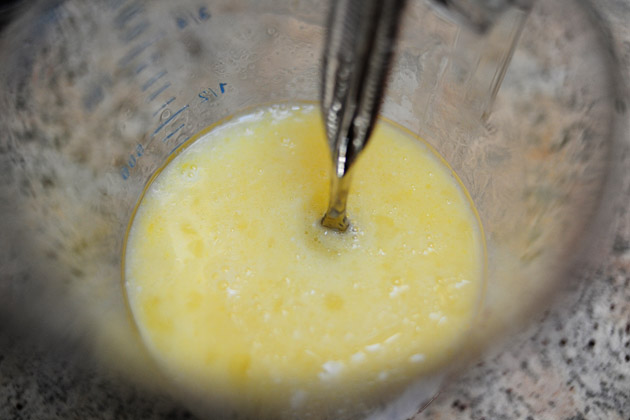 Mix it together with a fork… 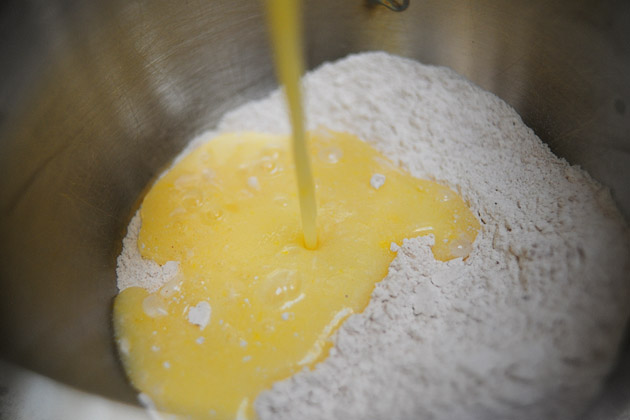 And pour it into the flour mixture. 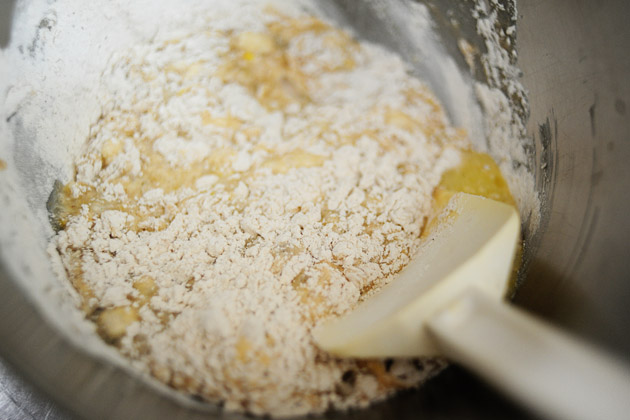 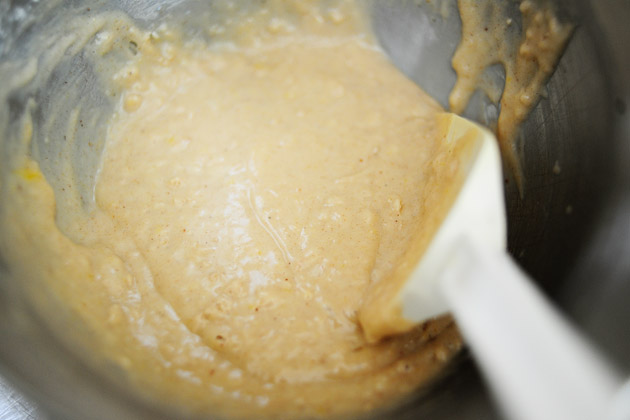 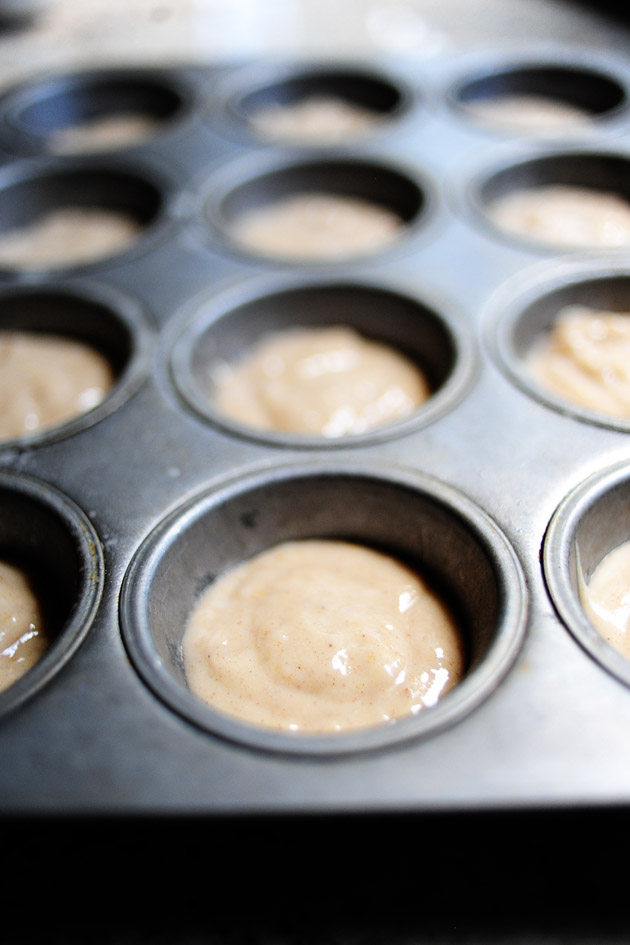 Use a 1/4 cup measure (not quite filled all the way) to evenly distribute the batter into twelve (greased!) muffin cups. 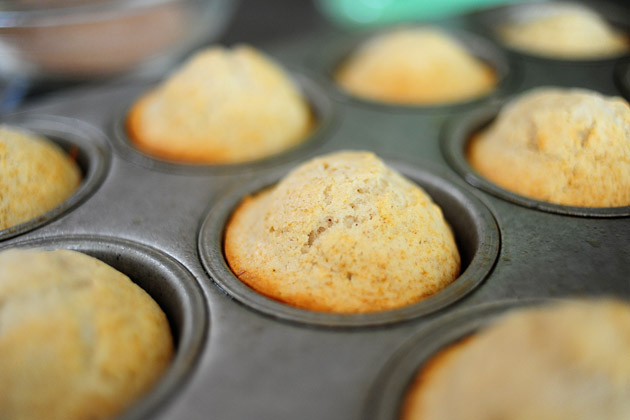 Then bake them until they’re just starting to turn golden brown. 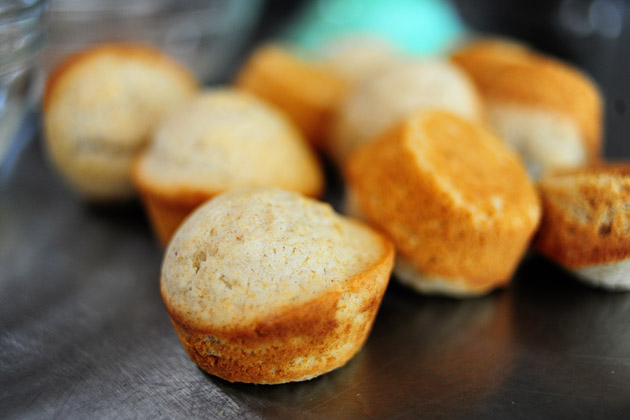 Dump them onto the counter. 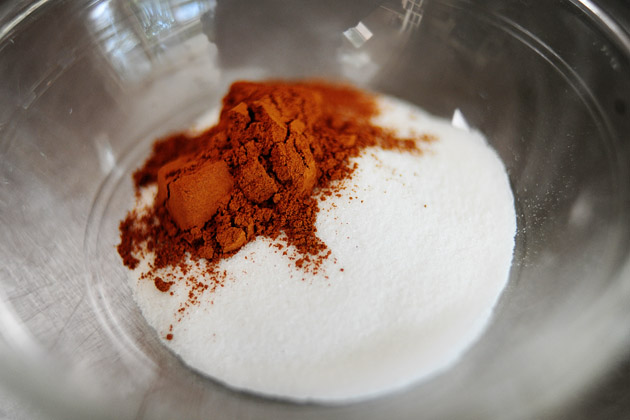 Now, combine some sugar and cinnamon… 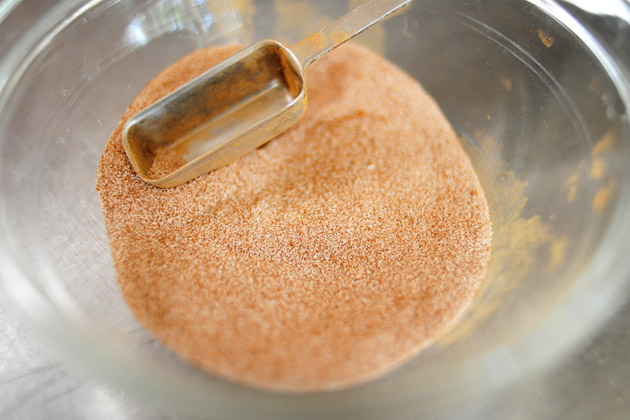 Stir it together until combined. 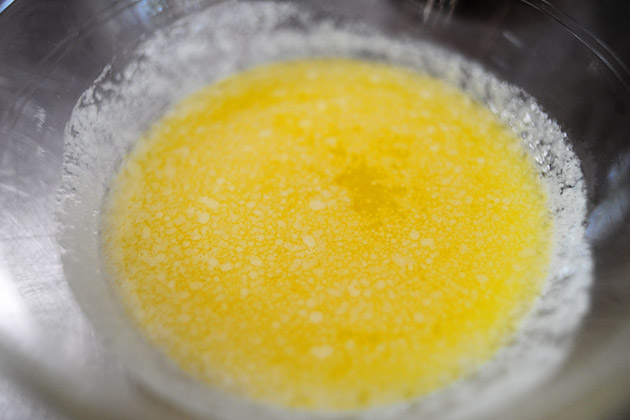 Then melt some butter.

And it’s time to have some fun! 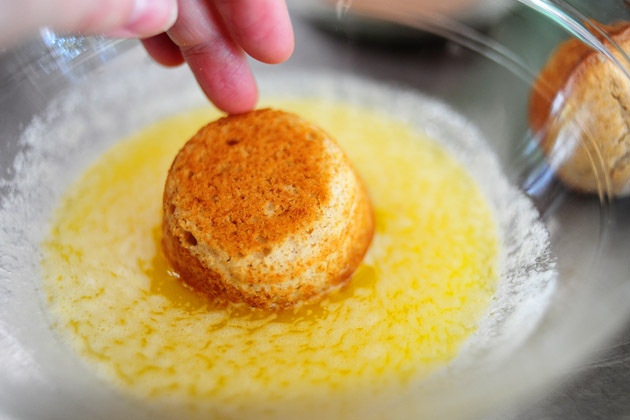 One by one, dunk the muffins in the melted butter… 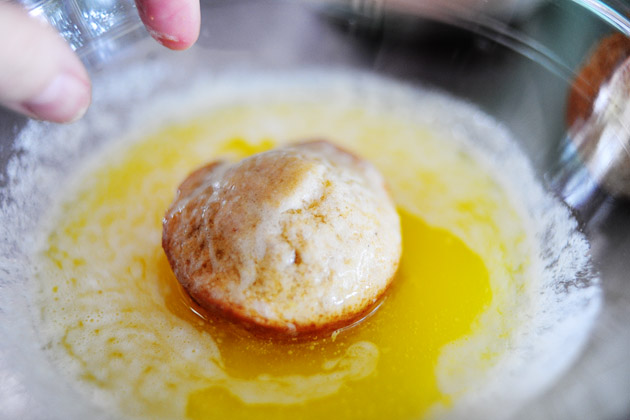 Making sure to coat both sides. 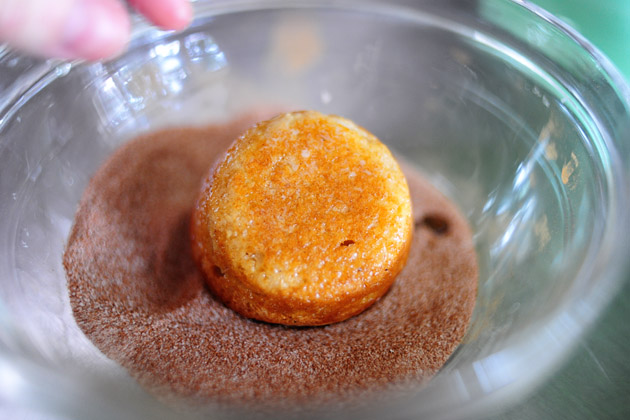 Then immediately throw it into the cinnamon/sugar mixture. 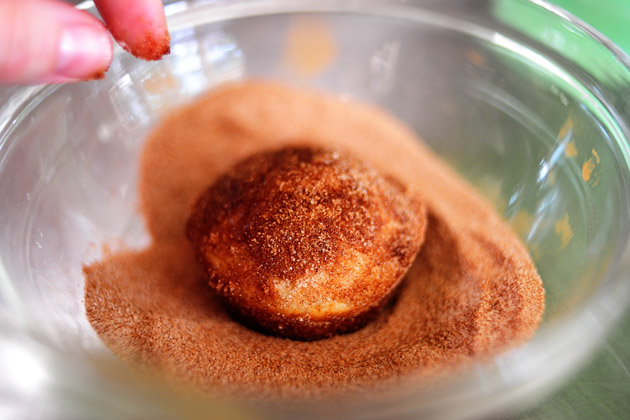 Turn it over to adequately coat both sides. Now, I might have coated mine too adequately, because I did wind up having to whip up a second batch of the cinnamon/sugar mixture. So just watch it as you go along! 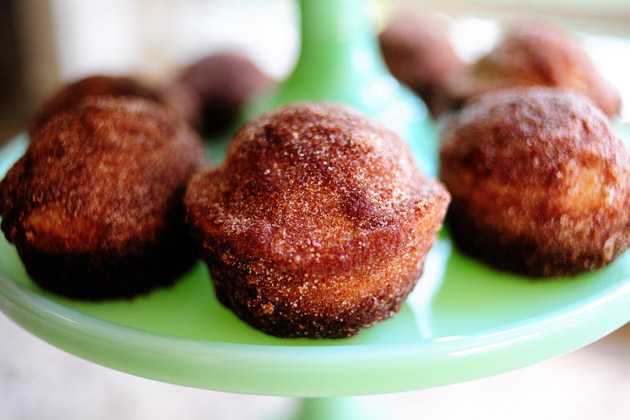 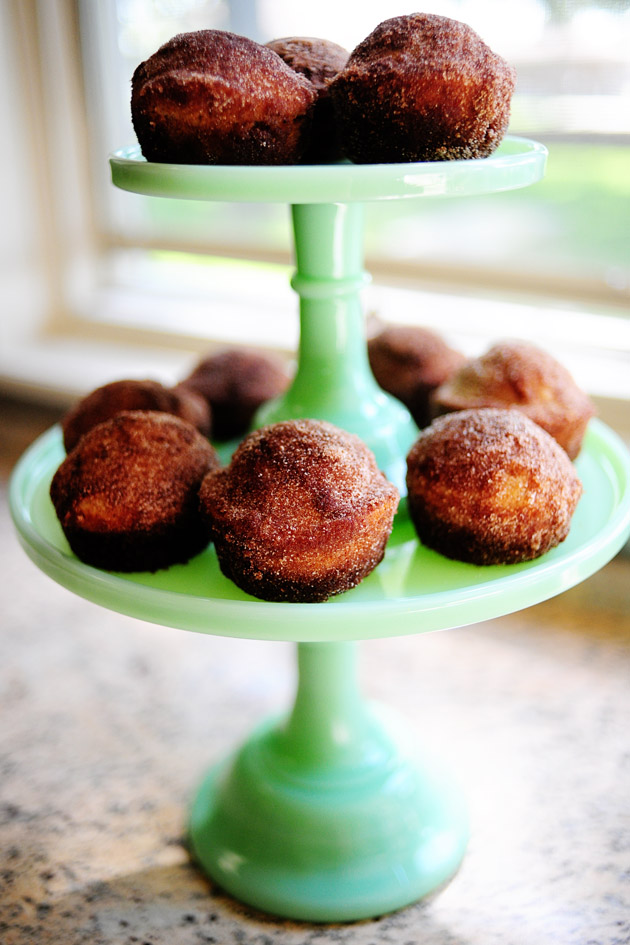 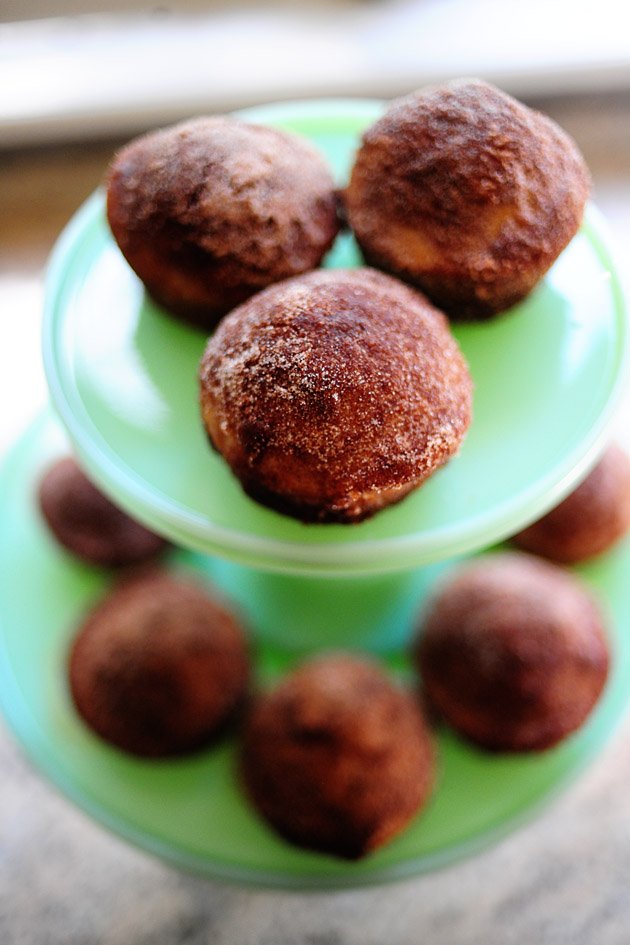 These will keep in a plastic bag for a few days, but be sure to nuke them right before serving for just a few seconds. Eating these warm is a requirement.

Thank you, lemanda, for the wonderful recipe!

I made these this evening with my 3 year old grandson. They turned out great. I used whole wheat flour and extra cinnamon. Will definitely give the recipe to our daughters.

I’ve got them in the oven right now! Ready to eat them now, too!

These are great!! I made them and everyone loved them…but it would help so much if this post had the ingredient amounts listed with the pictures.

These were beyond delicious. Hubby and I are fighting for the last 2. They really do taste like cake donuts but without the frying. Heaven!

Thanks Ree for testing this one out! I just discovered this today and I have to admit, I am a little giddy you picked one of my recipes! Glad you liked them!

Tried them and they were good. If you like these you should like a Cinnamon Cake receipe I will post to the site. It is simple, bakes fast and tastes very similar to the muffins but will go farther.

I made these yesterday and they are gone…even made them in the mini muffin pan, so we had a lot, but they are GONE!! I had to use a cup of wheat flour because 3/4 cup of white flour was all I had left…they were still good…I was hoping that making them with wheat flour made them somewhat healthy but being rolled in butter and dipped in cinnamon/sugar, uh, I don’t think so…Super easy to make and very tasty!!

I am going to have to try these after reading the comments. Yum!

I made these yesterday, and of course in a matter of 2 hours they were gone! I am off to make another batch for my weekend at the lake

Ok the ingredients are there where are the measurements

I made these today and love them. They will be a regular favorite for me!

Oh these sound totally delightful. I may have to try these this weekend. Yum!

I made these this morning, but I don’t get the “taste like a doughnut” part. I thought they tasted more like blueberry muffins without the blueberries or carrot cake without the carrots… Not that any of these are a bad thing – just not what I expected.

I believe this recipe is in your cookbook. It looked wonderful then and even better now. I need to stop procrastinating and make them tomorrow

I made these last night, they’ve been on my mind all week. They are absolutely the most delicious muffins ever!! yumm.

I am going to make these today. Thanks for the recipe!

Holy Smokes…. I made these yesterday for my two teenage boys and now they’re gone… I made more for a coffee with friends this morning; gone. My boys now want me to make another recipe for tomorrow morning. The best thing about them is you can make them with ingredients that everyone has on hand. No special trips to the store. Make them now, don’t think about it, just do it. YUM!!

I made these little gems yesterday and they were wonderful!!!

I made these today and they were simple and tasted oh so good.

The Cottage Street Bakery in Orleans on Cape Cod sells something similar. They call them Dirt Bombs. My daughter makes them all the time and we love them.

BRILLIANT!!! They tasted great! Photo Blogs that walk you through the baking process. That is such a wonderful idea to spread your receipt. I’m mad I didn’t think of it. Please keep these wonderful posts coming.

A friend posted your recipe link, and I whipped these up in no time. They are fantastic!!! I made them in mini muffin tins (3 dozen) and doubled the cinnamon sugar. Thanks for a new great staple for when I’m entertaining overnight guests!

These are really good… I think to push the envelope, I might add some sort of apple filler or yummy jam into the batter before baking and make them “apple fritters”. Yum!

Made them last night for the family!! They were a hit!! Brought them to share with my co-workers and they loved them! Thanks for sharing!

Yum! I think I’d use mini muffin tins…more topping per bite and all.
plus add a generous sprinkling of Garam Masala to kick it up…

Ugh, just when I thought I knew what dessert I was going to have tonight! I see these — Muffin-y, donut-y goodnesses!

Nigella Lawson makes another version with jam in the middle (I wrote about them here: http://www.tallgrasskitchen.com/jam-doughnut-muffins-for-brunch)

Definitely no need to store these – they MUST be eaten warm and immediately. Thanks for sharing a lovely cinnamon sugar version!

Imagine those with a maple glaze and crumbled crispy bacon on top. That’s what I’m talkin’ ’bout!

I made these a month ago and posted about it. They are THE BOMB.

I am definitely going to make these to take to my daughter. She loves cinnamon.

So making these TODAY!!!!

omg! I must do these muffins!

My mom used to make these for us every Sunday morning, they are so delicious! I need to start making them for my munchkin and husband now!

These look so good! If I weren’t still trying to lose my baby fat I’d be in the kitchen making these right now!

PW, you are very, very, very bad for pointing out this recipe. I already made a batch… and they’re already almost gone! These are so easy to make and so delicious… a dangerous combination!

I make a very similar version that I found on the King Arthur website. With those, you only dip the tops and I’m in favor of dipping and rolling the whole thing in butter and cinnamon sugar! I think I need to make them again…they were a huge hit to begin with!

Yummy! going to make these tomorrow for my sister coming to visit…..they sound lovely!

Can’t wait ti whip these babies up on Sat. morning and be the hero of the day!! YUM!

the moment i saw these in your book i knew i had to make them. ’twas love at first sight!

HMMM I wonder what they would be like if I used mini-muffin tins. Mock donut holes? :3

Hey! I just noticed that a lovely tiered milk glass tray was put to use in a way I noticed (because you’ve probably used it before and I failed to notice. It’s beautiful and I’m pleased it found a purpose. =)

These “like donuts” look delish. I’m making them on Thursday. – along with S’more brownies.

How much oil goes into this recipe? The amount is not listed. They look really good!

Definitely something the kids (and adults) would devour. Yum!

My kids are looking over my shoulder as I am writing this and they made me promise to make these, not that I need any convincing!

Man these look good and simple! My kids and I make something similar but with applesauce and as balls (no cow jokes here please Ree lol).

I am seriously headed to the kitchen right this moment!
Thanks Ree and Lemanda!

If I use gluten free flour, I think I can make these for my husband. Thanks!