Daddy’s Most Amazing Stuffing Ever (with Gravy) 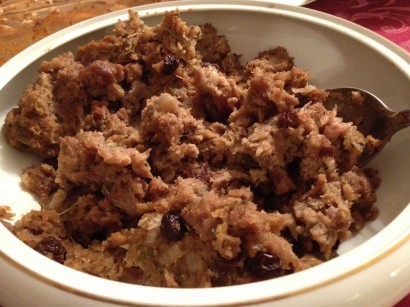 There is no stuffing like Daddy’s stuffing. And I finally quantified all the ingredients after cooking it purely by smell for years! You are one lucky duck!

This stuffing is part of the reason I tend to cook several Thanksgiving meals every year. It’s even better cold out of the fridge for lunch the next day. And the day after that.

This stuffing is meant to be cooked in the bird. The recipe I’m posting here was used to stuff a 15-20 pound bird.

Prep begins the night before with dicing the bread (and, if you wish to save time the next day, the onions and peppers, as well). The cook time will vary depending on how long your turkey needs to cook. Begin your prep work in the morning, giving yourself 2 1/2 hours to simmer the giblets, 1 hour to combine spices, onions, peppers, and raisins to make the stuffing, and 15-20 minutes to stuff the bird (and prep it with spices, etc.) before popping it into the oven.

It looks a lot of work, but it is totally worth it.

1. Dice the bread and leave out in large bowls overnight to go stale.

2. In the morning, put the giblets in a stock pot of water (I usually use a 4-5 quart pot). This will be the base for your gravy.

3. To the giblet water, add the onion and green pepper for the gravy.

4. Add the gravy spices to the giblet water, then bring to a boil over medium-high heat. Lower heat and simmer, covered, for 2 to 2 1/2 hours. (Don’t forget to put your turkey in the fridge in its baking pan!) Relax and watch the parade.

5. For the stuffing, put the onions and peppers into a large skillet and add butter and raisins. Cook on medium heat, stirring, until vegetables begin to soften and raisins are beautiful and puffy and soft. As the butter melts, add the stuffing spices. Stir constantly. This should take about 10-15 minutes. Remove from heat.

6. Combine the raisins, onions, and peppers with your bread in a large bowl. Add enough of the giblet water to make the stuffing wet, but not too wet. Because you’re stuffing the bird, it will not dry out much. (Don’t get the giblets in your stuffing! Save them for the gravy!) Mix the bread, raisin mixture, and giblet water; this works best if you do it with your hands.

7. Now is the fun part! Get your bird back out of the fridge and preheat your oven to 325ºF. Stuff your turkey until you think it’s going to pop! Stuff the cavity. Stuff the neck. When it’s full, stuff another couple of handfuls in.

8. Personally, I like rubbing the bird down with some Kosher salt, fresh ground pepper, and poultry seasoning (even under the skin), then slicing another stick of butter and sticking the butter under the skin and on the legs and wings. You may choose to do differently. I also cover my bird’s legs and wings for the first few hours it’s cooking to keep those juicy, plus I add some chicken stock and another ladle or two of the giblet water to the pan below the bird. Once your bird is prepped and stuffed, truss ‘er up and put ‘er in the oven for the prescribed time.

9. Back to the giblets! Add more water to the pot, then let it simmer until the turkey is ready to come out of the oven. While the turkey rests after cooking, you can chop the giblets finely (removing bones), add them back to the broth, then add the brown gravy mix. Whisk to mix, and add cornstarch or flour if you’d like to thicken it some. Because it has all the same spices as the stuffing, it goes great with both the turkey and (if you’re inclined) the stuffing. Amazing on mashed potatoes.

Note: if you wind up with extra stuffing that can’t fit into the bird, keep that in the fridge until you have about 30 minutes left, then put it in alongside the turkey, covered in foil, to warm it up. 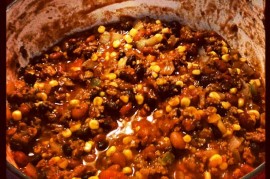 Throw It Together and Call It Chili 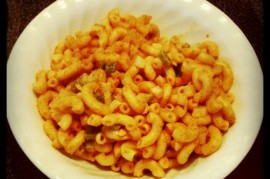 Find thesoccermom elsewhere on the web.

I realized while uploading this that I had no picture of the finished product. This is partly due to never thinking about it, but also could be due to the fact that I’m pretty busy shoving stuffing into my mouth as soon as it’s pulled from the bird.

I have resolved to take a picture this year (2011). I’ll change the picture when I’ve done that.

Our members have the best ideas for food gifts. Like this one!
END_OF_DOCUMENT_TOKEN_TO_BE_REPLACED

Put that slow cooker to work and rest easy knowing you have a warm meal waiting for you at the end of the day!
END_OF_DOCUMENT_TOKEN_TO_BE_REPLACED 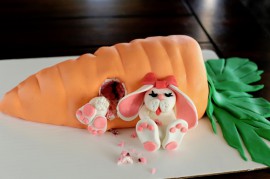 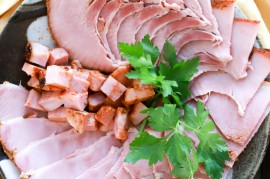 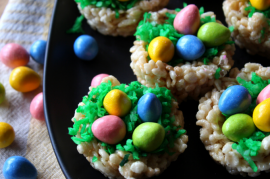 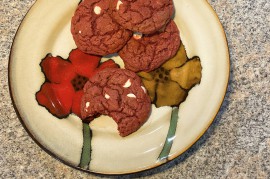