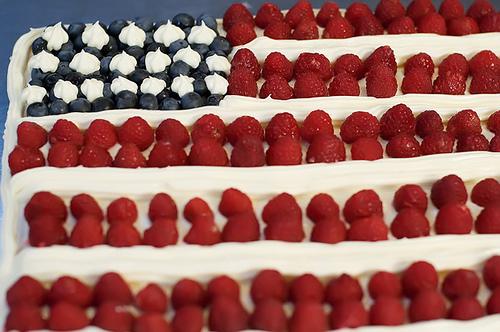 The decoration is nice and splashy, but the real appeal of this cake is the cake itself. It is beyond rich, dense, and out of this world, and those dadgum berries actually fool you into believing you’re consuming a healthy dessert.

In a mixing bowl, mix unsalted butter and sugar together on high until light and fluffy, about a minute or so. Add eggs, two at a time. Mix after each addition. Add sour cream and vanilla.

In a separate bowl, mix together flour, cornstarch, kosher salt and baking soda. Turn mixer to low and gradually add flour mixture to butter/sugar mixture, one scoop at a time. Mix after every addition. Keep adding the flour mixture, mix until just combined. Do not overmix!

Grease and flour a 17 x 12 1/2-inch sheet cake pan. (Note: this recipe may be halved for a smaller pan, as this recipe feeds an army.)

Pour the thick cake batter into the pan. (It’s much thicker than regular cake batters.) With a knife or offset spatula, spread the cake batter evenly over the pan.

Place the pan into a preheated 350-degree oven and bake for 20 to 30 minutes, until a toothpick comes out clean. I baked mine for exactly 20 minutes, so you probably want to start checking then.

To make the cream cheese frosting, in a mixing bowl, add cream cheese and butter. Whip to combine. Add powdered sugar and vanilla. Mix until thoroughly combined, scraping the sides once during mixing.

Put about 1/2 the frosting on the cake. Mark off the area of the stars with a toothpick. (No need to be proportionately accurate; just guesstimate.) Prepare a pastry bag with a large star tip and fill up to 2/3 with icing. Fold down both corners to keep icing from splurging out the top.

Fill the square in the corner with a nice layer of blueberries. With the star tip, squeeze little dollops of frosting all over the blueberries.

Variation: Simply frost the cake with all the icing and sprinkle raspberries and blueberries randomly and generously all over the cake.

Made this cake for a pre fourth birthday party. The cake is wonderful and moist and got rave reviews. Didn’t make the whole frosting recipe but used 2 pkgs of cream cheese and 2 sticks of butter. There was plenty of icing and decorated with mixed berries. It was the hit of the party. Fed 20 people with lots of leftovers. Wish I had boxed up a slice for breakfast!

I used this cake recipe to make a wedding cake on Tuesday. The bride is one of my very dearest friends, and although she could have afforded the fanciest professionally baked cake money could buy, she and her groom wanted a cake made by a friend, as they wanted a more personal touch. They wanted a really delicious cake made by one of their friends, and asked me to make it for them.

I baked the cake in two 13 x 6 pans, sandwiched together with strawberry jam and Jack Daniels (the bride and I have spent many a happy evening consuming that beverage, so it was my little joke to put some in her wedding cake) and I used my own cream cheese frosting recipe, and decorated with piped buttercream and sugar stars all coloured to match the wedding colours.

The cake was a huge success, a big hit with everyone (the mother of the bride ate three slices! it served 35 people more than one piece for most and there were leftovers!) and the only time the bride welled up all day was eating the cake her best friend had made for her, that was exactly how she had described her dream wedding cake – moist and delicious without being heavy.

Thank you for helping me be able to make such an important contribution to my friend’s big day, and I am so proud I was able to so something unique and personal to make their wedding extra-special by making their perfect cake form them, with love and care.

This cake is so wonderful, as delicious as it is beautiful!! Many compliments!

I made the cake as directed and used the recommended pan, but it took about 45 minutes to cook through for me. Maybe due to our higher altitude. I was nervous while I waited, but wow, it turned out really well.

I made the frosting listed in this recipe but didn’t get all fancy (don’t own frosting tips), so we just slathered about 3/4ths on and then made the flag decorations with blueberries and sliced strawberries. It was an enormous hit, the cake was dense and moist, and the cream cheese frosting was a perfect complement to the fruit. Five mitts, hands down!

I made this cake into cupcakes and served with That’s the Best Frosting I’ve Ever Had (also located here at TastyKitchen).

Oh man alive were they ever good!!

I have twice made the cake only (not iced as Ree wrote).

I used the recipe and scaled it to 12 servings using my own software instead of TastyKitchen’s. The main reason for this was because I don’t have the same size pan (17 x 12 1/2). Since I *think* this cake uses the same pan as she does in her Best Ever Chocolate Sheet Cake (jelly roll) I used the pans I do that that cake (Pampered Chef Large Bar and Small Bar pans). My pans come out to 47 2.25″ x 2.25″ pieces (35 and 12 pieces respectively).

As a result, my ingredient measurements were different than TastyKitchen’s scaling.

Regardless of all this, this cake is MOIST and the flavor was amazing and a huge hit with my family. I did increase the vanilla when making it the second time.

One time I frosted with a homemade buttercream frosting and the second time I did not frost it.

You can find both of my experiences:
http://TooMuchToDoSoLittleTime.com/2010/05/yellow-cake-with-buttercream-frosting/

Every part of this cake is good – the cake part, the frosting part and the wow! decorating part. It tastes great and it’s fun to make!

Our members have the best ideas for food gifts. Like this one!
END_OF_DOCUMENT_TOKEN_TO_BE_REPLACED

Put that slow cooker to work and rest easy knowing you have a warm meal waiting for you at the end of the day!
END_OF_DOCUMENT_TOKEN_TO_BE_REPLACED