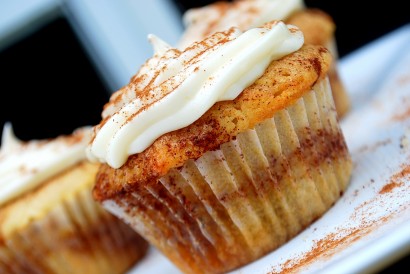 For the cinnamon swirl:
Stir together the melted butter, brown sugar, cinnamon and salt until smooth (the butter may separate that’s okay). Set aside.

For the cupcakes:
In a medium sized bowl whisk together the flour, baking powder, cinnamon and salt and set the bowl aside.

In a large bowl cream together the butter and sugar until smooth (about 3 minutes). Add in the eggs one at a time, beating well after each addition.

Bake for 20-25 minutes or until a toothpick poked into a cupcake comes out clean. Remove them from the oven and let them cool completely before frosting.

For the frosting:
In a medium-sized bowl beat together the butter and cream cheese until smooth. Then add the confectioners’ sugar, salt and vanilla until it forms a smooth mixture. Frost your cupcakes and sprinkle with cinnamon if desired. Enjoy! 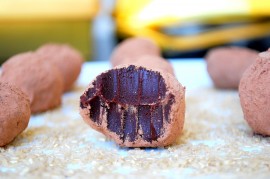 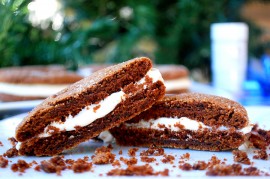 Find Chloe elsewhere on the web.

sooo yummy!!!!!! these are heaven!!! thank you soooooo much for sharing this super cupcake recipie!! these are a permanent fixture in my house!!! :)……..and a new breakfast treat,……..ok anytime of the day treat!!!,lol. wouldnt change a thing!!!

It may be tough to agree on which movie to watch, but an incredible snack is something everyone will love!
END_OF_DOCUMENT_TOKEN_TO_BE_REPLACED

Here's a quick and easy dish for those busy nights. Be a hero in 30 minutes or less!
END_OF_DOCUMENT_TOKEN_TO_BE_REPLACED