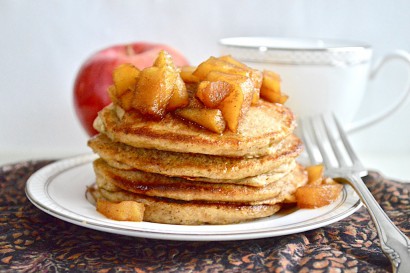 These mulled apple cider pancakes are so fluffy and warmly spiced for a perfect fall brunch! The warm apple syrup on top just makes them.

First, make the mulled apple cider. Pour the apple cider into a medium sauce pan and add the mulling spices in. To make it easier, you can put the mulling spices in a tea strainer before putting it into the cider. Otherwise, just add them in and turn the heat to medium high heat. Let the cider gently boil with the spices until it reduces by half to one cup. Take it off the heat and let it cool with the spices still steeping in it. While the cider reduces and cools, get the rest of the batter going. Whisk the flour, brown sugar, baking powder, cinnamon, nutmeg and cloves together in a large mixing bowl. Combine the milk, almond extract and egg yolks in another bowl. The egg whites should be separated in another bowl. Use a hand mixer to whip them up completely until they are fluffy and stiff.

Take the cool apple cider and remove the tea strainer of spices out. If you just put the spices right in, strain the cider through a fine mesh strainer right into the bowl of milk, egg yolks and almond extract. Whisk those wet ingredients together thoroughly, then whisk them into the dry ingredients until you have a smooth batter. Switch to a spatula to fold in the egg whites without deflating them. Set the batter aside. It’s time to make the easy apple syrup. Simply combine the diced apples, water, brown sugar and cinnamon in the same saucepan you made the apple cider in. Bring it to a low boil and let it thicken and become syrupy for about 15 minutes, stirring occasionally. While it cooks, start cooking off the pancakes. Get out an electric griddle and turn it to 350ºF, or heat up a griddle pan over medium high heat.

Grease the griddle with a pat of butter and then scoop the desired amount of batter on to make the size pancakes you want. On my griddle I easily fit 6 decent sized pancakes at a time. Cook them for about 3–4 minutes on each side, until fluffy and golden. Plate them as you cook them in batches and then add a generous amount of the apple syrup on top. Serve immediately and enjoy!

More Recipes from Leigh Suznovich of Jeanie and Lulu's Kitchen 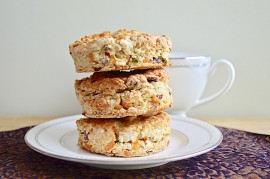 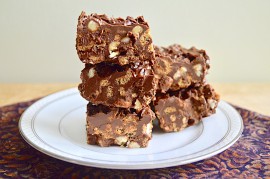 Find Leigh Suznovich of Jeanie and Lulu's Kitchen elsewhere on the web.

Our members have the best ideas for food gifts. Like this one!
END_OF_DOCUMENT_TOKEN_TO_BE_REPLACED

Put that slow cooker to work and rest easy knowing you have a warm meal waiting for you at the end of the day!
END_OF_DOCUMENT_TOKEN_TO_BE_REPLACED