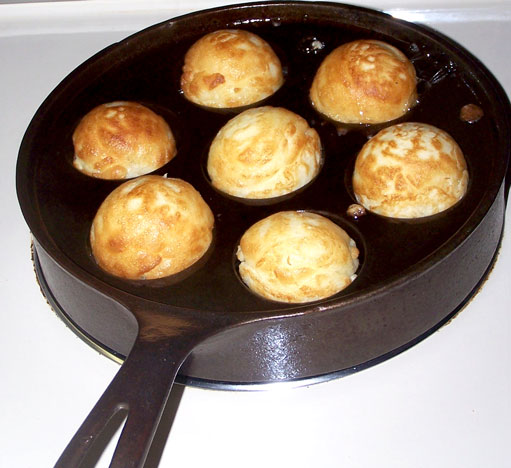 AEbleskivers are nicknamed “Danish Donuts” and are cooked in a special AEbleskiver pan that has half round holes in it. They’re wonderful anytime, but especially for breakfast or brunch.

Combine milk and yolks in another bowl, slightly beat, and then incorporate egg mixture into dry ingredient bowl.

Beat egg whites on high to stiff peaks in third bowl, and then carefully fold whites into batter.

Rub holes in AEbleskiver pan with some of the melted butter. Put pan on stove with heat on med high.

When pan is hot, add 2 tsp of melted butter to each divot, butter should sizzle, when pan is ready.

Pour batter into each divot, filling 2/3 full and cook until bubbly.

Then you can turn it upon itself by sliding a wooden skewer down the side of AEbleskiver, do not try to turn until the sides are slightly golden.

Keep cooking and turning until whole AEbleskiver is golden brown. Use skewer to poke and pick up AEbleskivers out of the pan.

Keep on plate in warm oven until all batter is used and then serve 3 AEbleskivers with a light coating of powdered sugar and warm syrup.

If desired, while cooking you can drop into batter a tsp of jam in the middle of each donut before turning. Some Danes drop a bit of apple into each donut while they’re cooking them instead of having them plain or with jam inside.

Love, Love, Love these things. I grew up on the Central Coast of California and use to love to visit a little town called Solvang which is where I was introduced to them. I especially love raspberry jam along side of them. Thanks for posting this recipe.

If anyone needs a visual lesson on AEbleskiver cooking. Chef Arne has a wonderful video on uTube. Here’s a link. Good luck, if they don’t come out on your first try, keep at it, they’re worth it!

Great recipe! I’ve been living in Denmark for 6 years, and take a very non-traditionalist approach by adding diced apples to my æbleskiver. My friends here have stopped trying to correct this, so I might start slipping other fruits in

I just heard about these not too long ago on someone’s blog…and that Williams-Sonoma sells the pans. You’ve given me one more reason to try these. Thanks!

Our members have the best ideas for food gifts. Like this one!
END_OF_DOCUMENT_TOKEN_TO_BE_REPLACED

Put that slow cooker to work and rest easy knowing you have a warm meal waiting for you at the end of the day!
END_OF_DOCUMENT_TOKEN_TO_BE_REPLACED