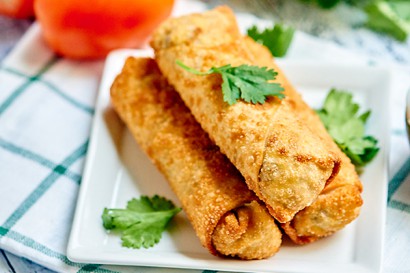 Start by cooking your sausage in a skillet over medium to medium high heat. Remove from heat, and set aside in a bowl when the sausage is fully cooked through and no pink remains. Break the sausage up with a spatula during the cooking process.

In the same skillet, melt half of the butter and add the diced onion, red pepper and green pepper. Cook until the peppers are softened to your liking, about 5 minutes. Season with salt and set aside in the bowl with the sausage.

Again, in the same skillet, melt the remaining half of the butter and add the whisked eggs. Cook until eggs are almost set. The eggs will still be a little runny and shiny, but you’ll remove the pan from the heat, and they will continue to cook. Add the cooked sausage, veggies, cheese, and black beans. Mix together and season with more salt to your liking.

Now, comes the frying part! Let me tell you, it is not hard! I promise. Fill a saucepan with about 1 inch of vegetable oil and heat over medium heat. Once the oil reaches 325 F you can start cooking the egg rolls! I’d suggest cooking them one at a time. It should take less than 30 seconds. Flip the egg roll over and move it around a little bit to ensure even cooking. When they’re done, they will be golden brown. Once golden brown, remove from the oil and set onto a paper towel to drain. Repeat cooking the rest.

Serve immediately with sour cream and salsa and enjoy!

Notes:
1. Now I know you’re probably thinking, why would I ever want to make egg rolls at 6 AM on a Monday morning? Well…you wouldn’t. So make these the night before and maybe have a few for dinner! Just store the rest in an airtight container in the fridge.
2. The next morning(s) just heat up as many as you want in your toaster oven or oven! I placed them directly on the rack in my toaster oven at 400 F for 10 minutes flipping them halfway through!

More Recipes from Show Me the Yummy 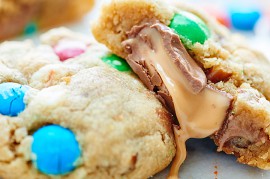 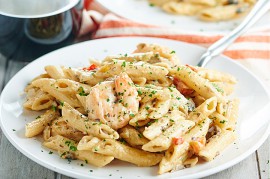 Find Show Me the Yummy elsewhere on the web.

Our members have the best ideas for food gifts. Like this one!
END_OF_DOCUMENT_TOKEN_TO_BE_REPLACED

Put that slow cooker to work and rest easy knowing you have a warm meal waiting for you at the end of the day!
END_OF_DOCUMENT_TOKEN_TO_BE_REPLACED