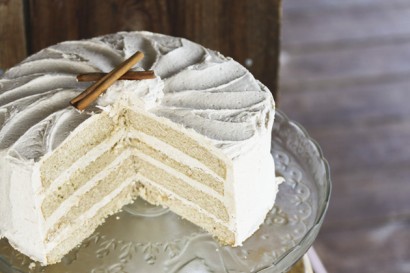 The name says it all: Snickerdoodle Cake with Brown Sugar Cinnamon Buttercream. This is the well-loved snickerdoodle cookie rewritten as a moist cinnamon vanilla butter cake layered and surrounded by a smooth, decadent buttercream that’s laced with sweet ground cinnamon and brown sugar.

Butter and flour two 8- or 9-inch round cake pans.

In a mixing bowl, whisk together the flours, baking powder, salt and cinnamon. Set aside.

In a large bowl, cream together the butter and sugar until fluffy and pale in colour. Beat in the eggs one at a time, fully incorporating each egg and scraping down the bowl between each addition. Then add the vanilla. Next, add about 1/3 of the milk, beat to incorporate, then add 1/3 of the flour, again beating to incorporate. Repeat this process, scraping down the sides of the bowl as necessary, until all of the milk and flour are added and mixed in evenly.

Divide the batter evenly between the two pans and bake in the preheated oven, rotating midway through, for about 35 minutes or until the cake tests done.

Let the cakes cool in the pans on a rack for 5 minutes before turning them out onto the racks to finish cooling.

Check the consistency of the buttercream. If it needs to be thicker, add the remaining confectioner’s sugar. If it is too thick, add more half and half a teaspoon at a time, beating after each addition, until it reaches the consistency you like.

To assemble and frost the cake:
Level out your cooled cakes (cut a sliver of the round top off so that the top is level) and then cut each cake, horizontally, into two even layers (so you’ll have 4 layers total).

Place one layer on a cake plate then add a layer of buttercream, spreading to the edges and evening out as you go. Repeat the process as you add the remaining layers.

Frost the top and sides of the cake with the remaining buttercream.

If desired, garnish the top of the cake with whole cinnamon sticks.
Cover and refrigerate for at least an hour before slicing. 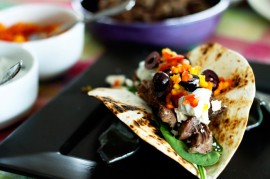 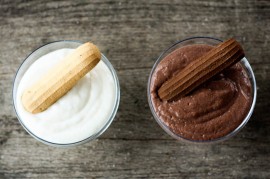 Find Rebecca elsewhere on the web.

Okay, Rebecca, I am completely obsessed with your recipes! This would happen on the night I vowed to eat a flax seed smoothie for dinner every night for the next month! Well, I guess I will be having some fabulous breakfasts and lunches instead!

My son loves snickerdoodles so I’m planning to make this for his birthday cake this week! Thanks for the recipe.

I am saving this! It looks divine!

Delicious cake, especially a day or two later. My husband thought is was wonderful. Next time I will just make half the icing.

I made this for my hubby’s b-day since he is a lover of all things snickerdoodle. The cake was not difficult to make, but did take some time. I agree there was a ton of frosting, but that is the idea with this cake I think (check out the picture, it speaks and says “frosting”). The cake itself was much more dense than I thought it would be, but had a great flavor. I agree it would make a nice bread all by itself. The frosting was delicious. The cake and frosting together were delectable. I will make this again, but only for special occasions as it is totally NOT on any New Year diet plan. Six and a half cubes of butter?! Dang. Worth it though.

This cake was amazing. I love cinnamon, so this might be my new favorite cake. I did have a bit of trouble icing the cake, it was very crumbly, but that was probably user error! :]

Made this up as cupcakes. The flavor was wonderful, distinctly cinnamon and vanilla, but still nice and light. The frosting was also tasty, but makes a huge amount. I made half a batch of it and still had a lot left over. Will definitely make this again. (Oh, I used a cupcake-keeper, and they stayed moist the whole 4 days that they lasted.)

It seems weird to say this, but maybe this was a bit too cinnamony. For cinnamon lovers though, it seems to be a super hit. I am super happy this was my first cake ever(hooray!) though. It was easy to make, split and frost. I am quite proud of the final product even if it isn’t to my tastes.

It may be tough to agree on which movie to watch, but an incredible snack is something everyone will love!
END_OF_DOCUMENT_TOKEN_TO_BE_REPLACED

Here's a quick and easy dish for those busy nights. Be a hero in 30 minutes or less!
END_OF_DOCUMENT_TOKEN_TO_BE_REPLACED