A spin on the campfire classic turned into a pie.

For the crust:
Begin by melting the butter and combining with the graham crackers until absorbed. Place into a 9-inch round baking dish. Take a ramekin and press the crust into the bowl.

Place in a 325ºF oven and cook for 8 minutes. Let cool completely.

For the ganache:
Place the chocolate chips, milk and ground coffee in a bowl. Place the bowl on top of a pot of simmering water. Cook until just combined and remove from heat. Pour on top of crust and place in fridge to set for 1 hour.

For the chocolate mousse:
Whip the cream to soft peaks, then refrigerate. Combine chocolate, butter, and espresso in the top of a double boiler over hot, but not simmering, water, stirring frequently until smooth. Remove from the heat and let cool until the chocolate is just slightly warmer than body temperature. To test, dab some chocolate on your bottom lip. It should feel warm. If it is too cool, the mixture will seize when the other ingredients are added.

Once the melted chocolate has cooled slightly, whip egg whites in a medium bowl until they are foamy and beginning to hold a shape. Sprinkle in the sugar and beat until soft peaks form. When the chocolate has reached the proper temperature, stir in the yolks. Gently stir in about 1/3 of the whipped cream. Fold in half the whites just until incorporated, then fold in the remaining whites, and finally the remaining whipped cream.

With a spatula, pour the mousse into the pie over the ganache.

For the whipped cream:
Place the whipping cream and sugar into a bowl and beat until soft peaks are formed.

Finish assembly by spreading the whipped cream over the chocolate mousse. Serve and enjoy!

More Recipes from Peter - from "Feed Your Soul Too" 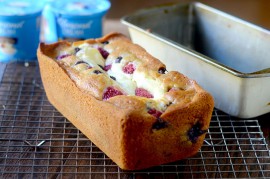 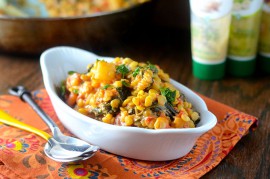 Find Peter - from "Feed Your Soul Too" elsewhere on the web.

It may be tough to agree on which movie to watch, but an incredible snack is something everyone will love!
END_OF_DOCUMENT_TOKEN_TO_BE_REPLACED

Here's a quick and easy dish for those busy nights. Be a hero in 30 minutes or less!
END_OF_DOCUMENT_TOKEN_TO_BE_REPLACED

by Lindsay @ My Therapist Cooks in Desserts
Super yummy and easy blondies made in one bowl with no...
0.00 Mitt(s) 0 Rating(s)