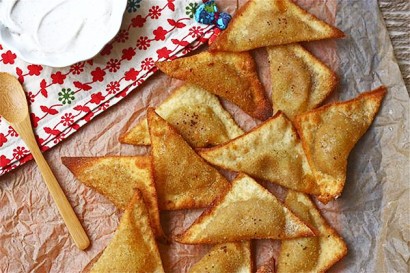 1. Add the whipped cream, sugar and cinnamon to a medium bowl. Using a stand-up mixer or hand-mixer, beat until medium peaks form. Wrap the bowl with plastic wrap and transfer to the refrigerator until the wontons are fried and you’re ready to serve.

2. In a medium bowl, add the pumpkin puree, mascarpone cheese, sugar, lemon zest and juice, cinnamon, nutmeg, cloves and salt. Mix until smooth. Add additional sugar to taste. If you like it sweeter, by all means, add a bit more.

3. To assemble the pillows/wontons, beat the egg white in a small bowl and keep it handy. Lay the wonton wrappers out on your kitchen counter. Add a half teaspoon of filling to the middle of each wonton. Using a pastry brush or your index finger, dip into the egg white and brush the edges of the wonton. Taking one corner of the wonton, fold it over to form a triangle and press out any air bubbles. Repeat process until all of the pillows are formed. If for some reason, you have to answer the phone or leave the process for more than 5 minutes, cover the wontons with a damp paper towel. This will make it so they don’t dry out.

4. Preheat your oven to 200 F. Into a cast iron skillet (or pot), add the vegetable oil until it reaches about 1-inch up the sides. Heat the oil until it reaches 350 F. Add a few wontons into the hot oil at a time, being sure not to overcrowd the skillet. Fry on each side for 1 minute or until lightly golden brown. Remove the wontons from the oil and transfer to a stack of paper towels to drain. Place cooked pillows into a warm (200 F) oven to keep warm while you repeat the frying process with the remaining wontons. Serve right away with the cinnamon whipped cream.

More Recipes from A Cozy Kitchen 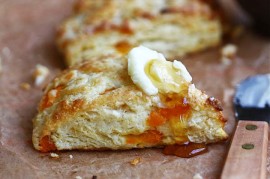 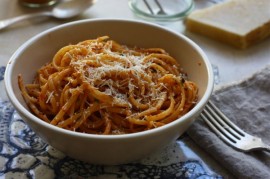 Find A Cozy Kitchen elsewhere on the web.

I made some of these for my gaming group because I had the ingredients on hand and I quite liked them! I’m not sure if the guys were sold, but tiny fried pumpkin pies? I’m in!

Our members have the best ideas for food gifts. Like this one!
END_OF_DOCUMENT_TOKEN_TO_BE_REPLACED

Put that slow cooker to work and rest easy knowing you have a warm meal waiting for you at the end of the day!
END_OF_DOCUMENT_TOKEN_TO_BE_REPLACED