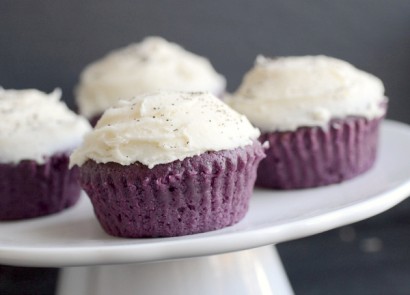 Delicious and floral cupcakes with a soothing icing.

Preheat the oven to 350 F. Line a 12-count cupcake tin with paper liners and set aside.

Meanwhile, in a large metal mixing bowl, beat the butter and sugar with an electric mixer until combined.

Add the eggs and vanilla and beat until creamy. Stir in the food coloring and mix until you get a deep purple. Using a spoon, stir in the flour, baking powder and chopped lavender. Stir in cream.

Mix until batter is fully combined. Fill each cupcake liner 2/3 full with batter and bake for about 12-14 minutes, or until a toothpick inserted in the middle comes out dry.

Meanwhile, put the tea bags in a heat proof bowl. Pour the boiling water over the tea bags and let them steep about 10 minutes. 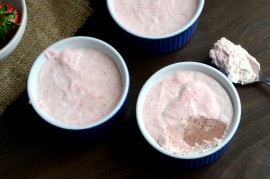 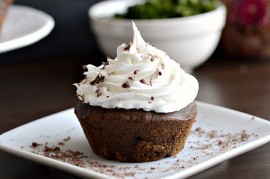 Find claireg12 elsewhere on the web.

This turned out to be a very good cake. I measured out 2 1/2 tablespoons of lavender then chopped them. Next time, I will subtract the half tablespoon. Also, I did not use the food coloring and liked the flecks of lavender in the cake. The earl grey icing was fabulous and a nice compliment to the cake!

Our members have the best ideas for food gifts. Like this one!
END_OF_DOCUMENT_TOKEN_TO_BE_REPLACED

Put that slow cooker to work and rest easy knowing you have a warm meal waiting for you at the end of the day!
END_OF_DOCUMENT_TOKEN_TO_BE_REPLACED