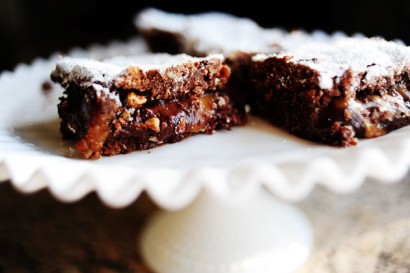 This is the closest recipe I could find to the “Killer Brownie,” an unbelievably scrumptious treat from Dorothy Lane Market in Dayton, Ohio. I adapted the well-loved/classic “Knock You Naked” recipe by considerably decreasing the amount of chocolate chips, and by baking them in a square rather than the rectangular pan the recipe calls for. These are tremendously good.

In a large bowl, mix together cake mix, chopped pecans, 1/3 cup evaporated milk, and melted butter. Stir together until totally combined. Mixture will be very thick.

Press half the mixture into a well-greased 9 x 9 inch square baking pan. Bake for 8 to 10 minutes. Remove pan from oven and set aside.

In a double boiler (or a heatproof bowl set over a saucepan of boiling water) melt caramels with additional 1/2 cup evaporated milk. When melted and combined, pour over brownie base. Sprinkle chocolate chips as evenly as you can over the caramel.

Turn out remaining brownie dough on work surface. Use your hands to press it into a large square a little smaller than the pan. Use a spatula to remove it from the surface, then set it on top of the caramel and chocolate chips.

Bake for 20 to 25 minutes. Remove from pan and allow to cool to room temperature, then cover and refrigerate for several hours. When ready to serve, generously sift powdered sugar over the surface of the brownies. Cut into either nine or twelve helpings, and carefully remove from the pan.

*Adapted from the classic “Knock You Naked Brownies” recipe, based on a dessert at the Salt Creek Steakhouse in Breckenridge. These brownies don’t really knock you naked…but almost.

I made these today for a brownie sale at church. I did not like the German chocolate flavor. I think I would have preferred a dark fudge cake, or even brownie mix.

I made these twice over the past 2 weeks! My family is loving them. I did want to mention that I used 1/2 the amount of caramel after reading other posts (30 wrapped caramels total) but remember to 1/2 your evaporated milk if you do that, or your caramel will be very runny. I also increased the chocolate chips to 1 cup since my family loves chocolate, and they turned out perfect!
Best brownies ever!

I live in Dayton, Ohio. Dorothy Lane is just down the road from me. I LOVE THESE BROWNIES!!The Killer brownies are one of the best brownies you will ever taste. I have sent them to several of family and friend all over the country. I have friends in Florida that request them about 5 times a year. The store has so many different flavors of killer brownies. I tried this recipe and I will say that it is close, but nothing beats the real thing.

These look really good and fit my egg-free requirement since the cake mix doesn’t have egg as an ingredient (I looked it up). But if anyone has any suggestions on how to do it from scratch with no eggs I’m all ears…

After all those calories, I am afraid I wouldn’t want to be naked ever again!

Sounds so yummy though!

I made these and everyone in my family loved them. The thing I prefer, though, is to make the brownies from scratch, not use a box mix. But, I tell you, everyone raved about them.

These were great! I used my pyrex dish which is about 9 X 7 maybe, but it’s got tall sides. Plus my cake mix box was 15 oz, not 18, so when I mixed everything it was more moist. I had no trouble whatsoever, the bottom baked perfectly at 8 mins, I used one bag of caramels (about 50) melted in the microwave, and them my top layer I just made into a square on waxed paper, and then pretty much turned it over onto the top, it worked great. I also used dark chocolate chips. I heated this in the mircrowave before serving, I can’t imagine eating them cold!
This was a big HIT!!!

These are pretty great. I have never been able to keep the caramel from running underneath the bottom layer of brownie though.

Very, very close to the original Killer Brownie–yum! I did use “I’ve Been Called Evil Caramel Sauce” from this website, and it worked perfectly. No bubbling over, even in a small, disposable 9×9 pan. I also salted the caramel slightly with fleur du sel before baking, to cut the killer sweetness. Yum!

Loved these! I used a bag of Kraft caramel bits instead of having to unwrap caramels, and it was super easy.

Our members have the best ideas for food gifts. Like this one!
END_OF_DOCUMENT_TOKEN_TO_BE_REPLACED

Put that slow cooker to work and rest easy knowing you have a warm meal waiting for you at the end of the day!
END_OF_DOCUMENT_TOKEN_TO_BE_REPLACED