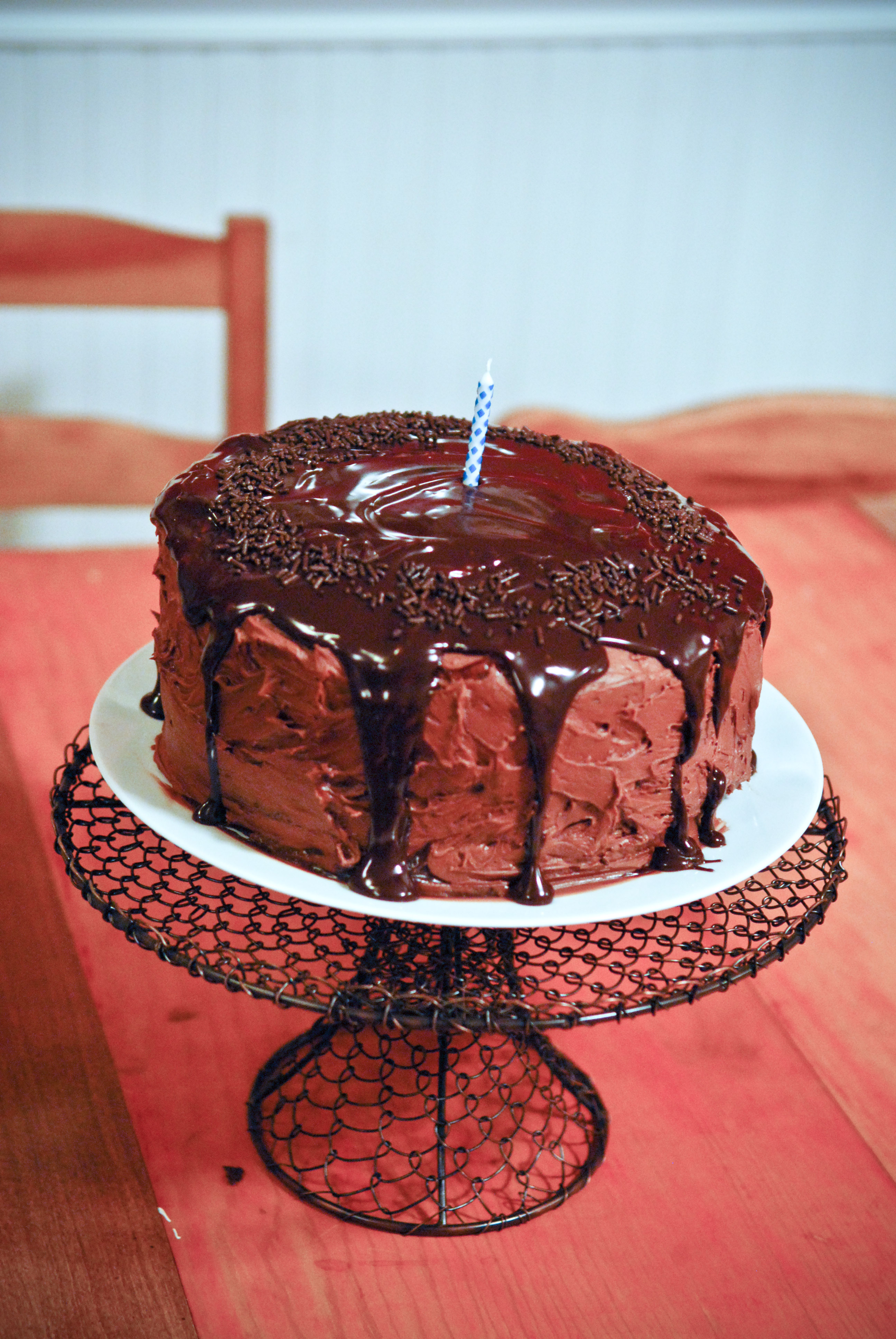 A rich and decadent layer cake perfect for a special occasion.

In a small bowl, combine 1 cup cocoa and the boiling water, set aside.

In a large bowl or stand mixer, cream 1 cup butter and the 2 1/4 cups sugar until light and fluffy. Add the eggs one at a time, beating well after each addition. Beat in 1 1/2 teaspoons of vanilla.

In a separate bowl, combine the flour, baking soda, baking powder, and salt. Add the flour mixture to the creamed butter mixture alternately with the cocoa mixture, beating well after each addition.

Pour into three greased and floured 9″ round baking pans, and bake at 350 degrees for 25-30 minutes, or until a toothpick inserted in the center comes out clean. Cool for 10 minutes then remove to cool on racks. Cool the cakes completely.

For the chocolate ganache, put chocolate chips in a medium bowl. Heat the cream and 2 Tablespoons sugar in a saucepan over medium-low heat, until it comes to a gentle boil. Pour the cream mixture over the chocolate chips and whisk gently until smooth. Refrigerate for 45 minutes or until the ganache begins to thicken. Stir it occasionally.

For the frosting, in a bowl or stand mixer beat 1 cup butter until fluffy. Add the confectioners’ sugar, 1/2 cup cocoa, milk, and 2 teaspoons of vanilla; beat until smooth.

To assemble the cake, place one cake layer on serving plate and spread with one cup frosting. Top with second cake layer, then spread with one cup of ganache. If the ganache isn’t thick enough, it may squish out the sides of the layered cake– no worries, it will still taste great! Top with third cake layer; frost top and sides of cake with remaining frosting. Warm the leftover ganache until pourable, then pour over the cake. Refrigerate until serving. Enjoy, and have the leftovers with coffee for breakfast the next day! And the next day! 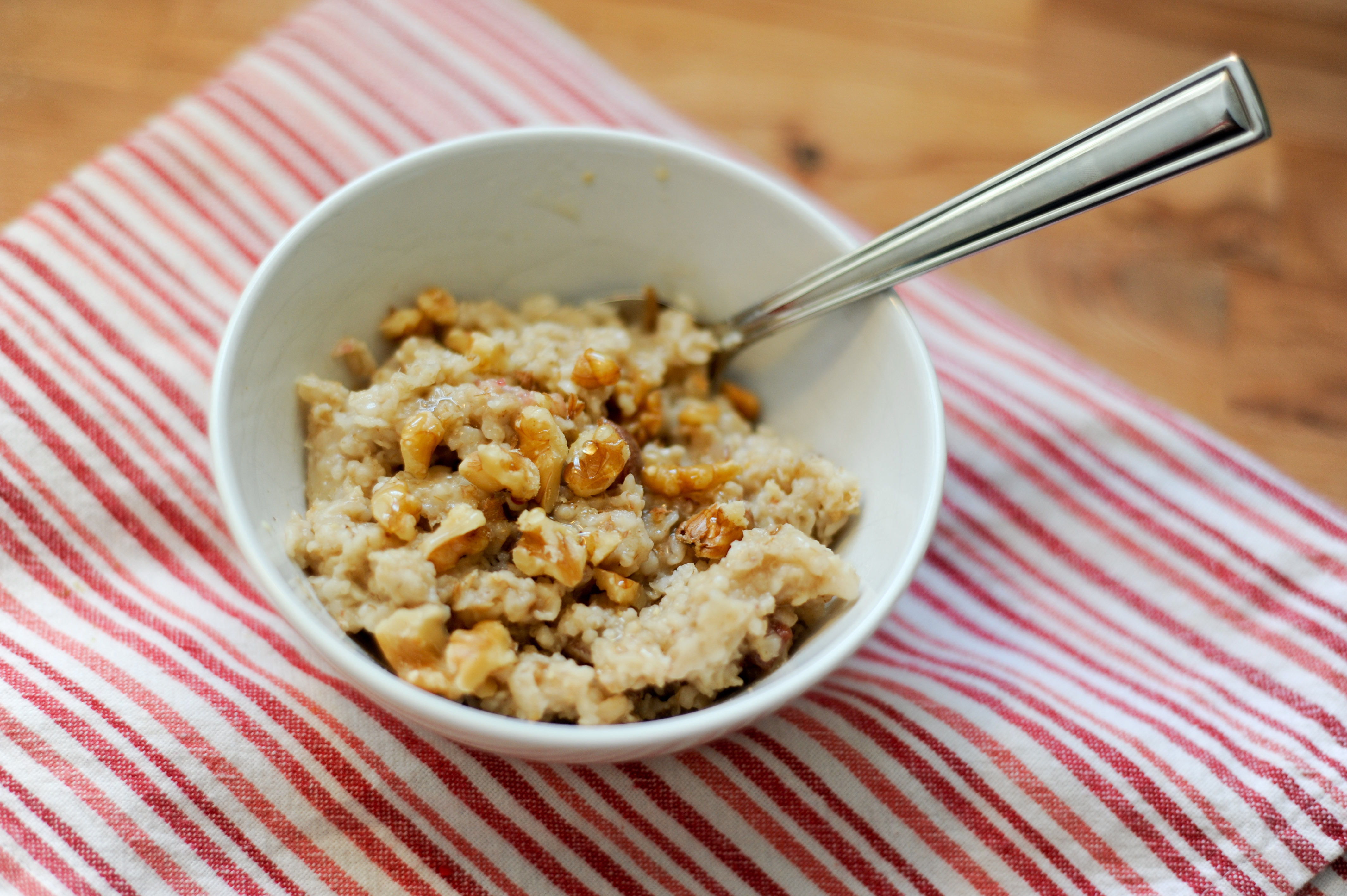 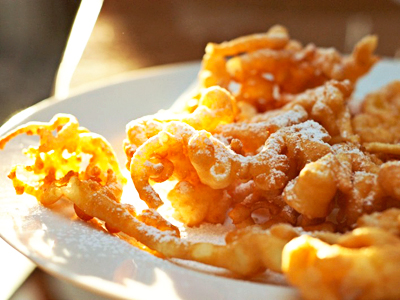 Find HeatherD elsewhere on the web.

If I could give this cake 10 mits, I would. This cake is chocolatey, yet not too sweet. It’s dense and decadent. The only thing I did different is my cake needed to cook 35 minutes (my oven is newer, so maybe that had something to do with it) and added 1/2 c of milk to the frosting. I will definitely make this again. Thanks for sharing!

OMG. This cake is SO chocolate-y and delicious! I highly recommend, but your head might explode from the chocolate goodness. I froze my cake layers after they cooled to room temp while I made the frosting and ganache. They were way easier to layer and ice that way.

Our members have the best ideas for food gifts. Like this one!
END_OF_DOCUMENT_TOKEN_TO_BE_REPLACED

Put that slow cooker to work and rest easy knowing you have a warm meal waiting for you at the end of the day!
END_OF_DOCUMENT_TOKEN_TO_BE_REPLACED 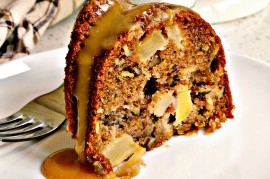