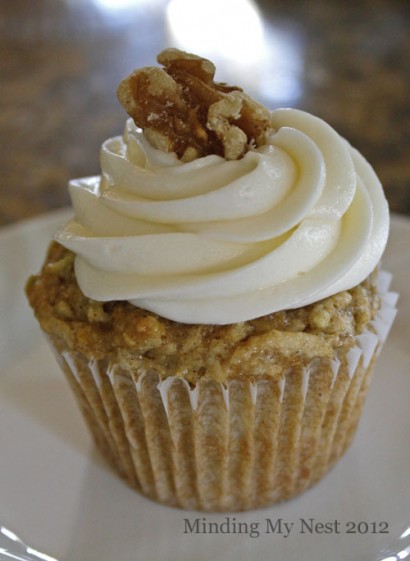 My adorable niece and I won first place at the Tulsa State Fair with this tender apple cake and sweet cream cheese frosting. Even better – my husband liked it too.

Add shredded apples (and any juice) into the flour mixture and toss until the apples are evenly coated.

In the bowl of a mixer, combine sugar, brown sugar, eggs and oil and mix until well blended. Gently fold in apple/flour mixture and mix until just combined.

Dish cake batter into the liners (approximately 3/4 full) and bake for 25 to 35 minutes or until a toothpick inserted in the middle comes out mostly clean. When done, remove them from the oven. Take them out of the pan and onto a cooling rack to cool.

While the cupcakes are baking, prepare the citrus syrup by combining the water, sugar and zest in a small saucepan and then bring to a boil over medium heat. Boil for one minute then remove from heat. Strain syrup through a fine mesh sieve into a bowl and discard zest. Allow syrup to cool.

To prepare frosting, cream the cream cheese, butter, salt,and vanilla in the large bowl of your stand mixer. With the mixer on low speed, slowly add the powdered sugar then beat until smooth.

Pipe or spread frosting onto cupcakes and enjoy!

Our members have the best ideas for food gifts. Like this one!
END_OF_DOCUMENT_TOKEN_TO_BE_REPLACED

Put that slow cooker to work and rest easy knowing you have a warm meal waiting for you at the end of the day!
END_OF_DOCUMENT_TOKEN_TO_BE_REPLACED