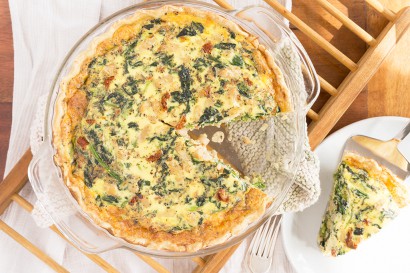 For the crust (omit if using store-bought):
In a large bowl, mix flour and salt with fork.

In a Pyrex or small bowl, beat canola oil and cold water with whisk until it thickens. Pour into flour and mix with fork until it comes together in a rough ball.

Press into 9-inch pie crust using the back of a measuring cup so it’s even. Don’t be afraid to spread it thinly. It will fit the pie crust just perfectly without any overhang. Crimp the edges.

Refrigerate for at least ½ hour before filling.

In another large bowl, vigorously whisk eggs, half-and-half, salt and basil until a little foamy. Combine both mixtures into 1 bowl and mix well.

Add the remaining ½ cup cheese to the bottom of the quiche crust. I like to line the bottom edges for a cheesy bottom! Gently pour the quiche filling into the crust. Sprinkle with freshly ground pepper and a few dashes of salt.

Heat oven to 350ºF and bake for 45 minutes or until golden and middle is set. 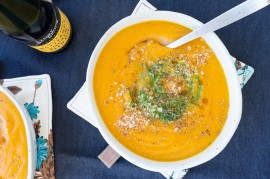 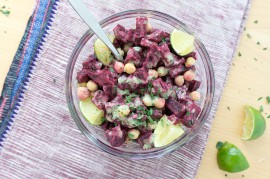 Find Oat&Sesame elsewhere on the web.

Our members have the best ideas for food gifts. Like this one!
END_OF_DOCUMENT_TOKEN_TO_BE_REPLACED

Put that slow cooker to work and rest easy knowing you have a warm meal waiting for you at the end of the day!
END_OF_DOCUMENT_TOKEN_TO_BE_REPLACED