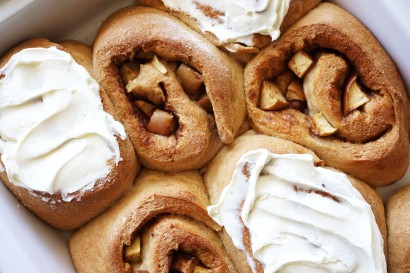 Warm almond milk to 95-100ºF. If you don’t have a thermometer, you should be able to stick your finger in the milk without it burning. I heated mine in the microwave for about 35–40 seconds and it was perfect. You don’t want it too hot because this can kill the yeast!

Whisk yeast and 2 teaspoons coconut sugar into the almond milk. Cover with a towel and let proof for at 5 minutes. When it has frothed significantly (about 1 inch above where it was originally in the bowl), whisk in melted and cooled coconut oil. Set aside.

In a large mixing bowl, combine flour, remaining 1/4 cup coconut sugar and pumpkin pie spice. Pour in the yeast mixture and, using the dough attachment on a stand-mixer, knead until the dough forms a ball around the attachment (it shouldn’t be sticking to the sides of the bowl anymore). Gently form the dough into a ball and place in a clean, lightly greased large bowl, covered, to proof for 1 hour in a warm environment. My trick is to heat the oven to 200ºF, then turn it off, and let the rolls proof in the oven as it cools down slightly. It should double in size.

For the filling, in a medium-size bowl, combine coconut sugar, spices, and apple for the filling while the dough rises. Let this mixture rest at room temperature so that the flavors from can come together.

On a lightly floured surface, roll dough out into a large rectangle about 1/2-inch thick. Rub to the edges with coconut oil and evenly sprinkle filling mixture over the top. Leave this about 1 inch from the edges, as it will move towards the edges while you roll the dough.

Depending on how many rolls you would like, roll from the long or short end. Rolling from the long end will give more rolls with fewer swirls, while rolling from the short end will do the opposite. Lay sliced rolls in a lightly greased ceramic baking dish, cover, and proof for another hour in the warm oven (use the trick from above).

After rising the second time, heat oven to 350ºF and bake rolls for 30–32 minutes if larger, and 28–30 minutes if smaller. You’re looking for a golden top with sides the give just a little when pressed lightly with your finger. Remove from the oven and cool for about 10 minutes.

Prepare frosting by combining ingredients in a mixing bowl and use a stand- or hand-mixer to beat on high until light and fluffy. Sweeten more or less to your preference.

Spread 2-3 tablespoons of the frosting on top of each cinnamon roll and serve immediately. Store any leftovers in an airtight container in the fridge for up to 1 week. Unfrosted rolls can be frozen and reheated at a later time. Enjoy!

Notes:
• I’ve tried this with whole wheat flour and I think the protein content is too high, which makes it hard for the yeast to do its job and results in not-as-fluffy rolls. I recommend whole wheat pastry flour for the best texture.
• Granulated sugar can be used here instead.
• Brown sugar can be used here instead.
• I used a 9×13 natural clay baking dish from Lodge Cast-Iron. 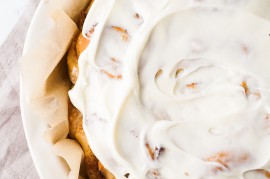 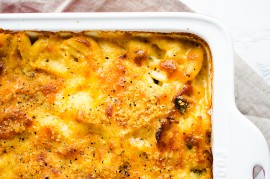 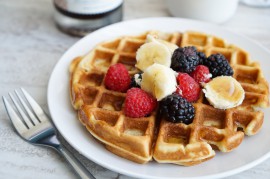 Start your day right with this breakfast recipe that caught our eye.
END_OF_DOCUMENT_TOKEN_TO_BE_REPLACED 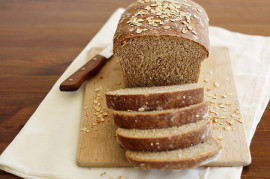 Looking for your next baking project? We're on it!
END_OF_DOCUMENT_TOKEN_TO_BE_REPLACED 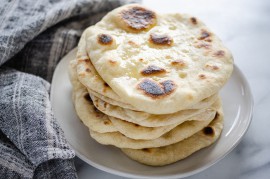 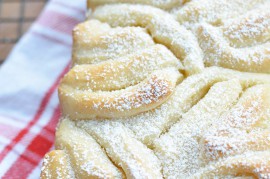 by cookingwithteamJ in Breads
Japanese Milk Bread has always been known to be super soft,...
0.00 Mitt(s) 0 Rating(s)