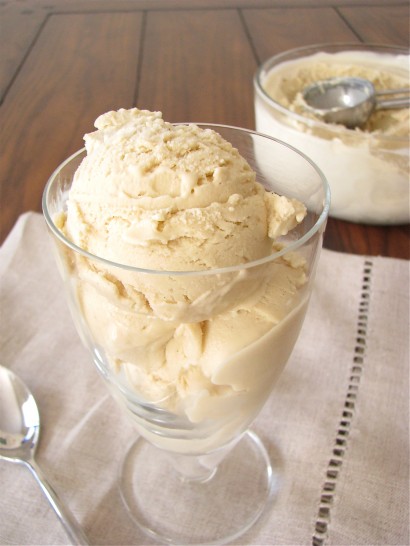 All the flavor of a campfire-roasted marshmallow in ice cream.

I used a brûlée torch to toast the marshmallows. If you don’t have a kitchen torch, you can probably use a broiler.

Using the spatula, transfer the marshmallows into a blender. Set aside.

Place the egg yolks, evaporated cane juice, and salt in a large mixing bowl. Whisk vigorously until the mixture turns a pale yellow color. Set aside.

Place the milk and vanilla bean paste in a medium-sized heavy-bottomed saucepan. Set the burner on your stove to medium heat. Heat the mixture, stirring often, until it is steaming but not quite simmering. Spoon out about 1/4 cup of the hot milk and slowly stream it into the egg yolk mixture, whisking constantly to temper the eggs. When the mixture is well-combined, repeat this step with an additional 1/4 cup of the hot milk.

Then pour the tempered egg mixture into the saucepan with the rest of the hot milk and heat, stirring slowly but constantly, until the mixture coats the back of a wooden spoon and has thickened to the consistency of heavy cream.

Remove mixture from the heat and whisk for a few minutes to cool it down slightly. Pour mixture over the marshmallows in the blender. Blend for a minute or so, then let the mixture sit with the lid off for a couple of minutes. Replace the lid and run the blender for an additional minute. Then add the cold heavy cream and vanilla extract to the blender and blend for 30 seconds.

Remove lid of blender and let the mixture sit on the counter until it cools to room temperature. Replace the lid and let mixture chill in the fridge until very cold, at least 6 hours.

When ready to churn the ice cream, give the mixture a quick blend (it will be very thick after chilling, and some of the marshmallow might have begun to separate from the liquid), then pour into your ice cream maker, and follow manufacturer’s instructions.

Then transfer ice cream to a sealable container, cover, and place in freezer until firm, at least 2 hours.

Nutritional Information Per Serving (about 1/2 cup): 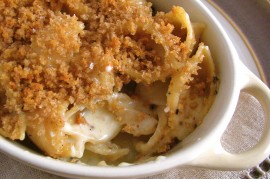 Baked Mac & Cheese for One 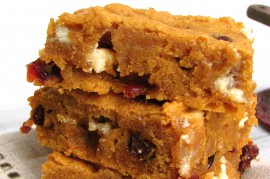 Find Lauren elsewhere on the web.

Our members have the best ideas for food gifts. Like this one!
END_OF_DOCUMENT_TOKEN_TO_BE_REPLACED

Put that slow cooker to work and rest easy knowing you have a warm meal waiting for you at the end of the day!
END_OF_DOCUMENT_TOKEN_TO_BE_REPLACED