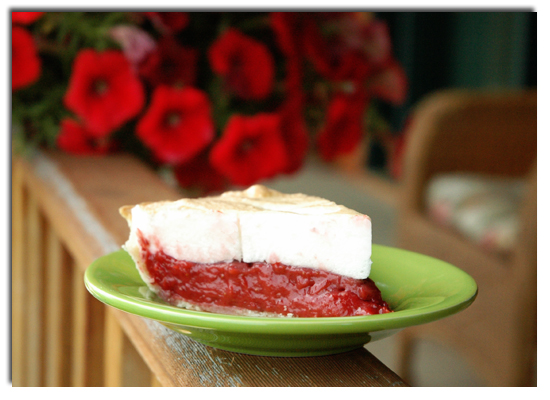 This recipe came to me while out picking in the strawberry patch. I dedicated it to my niece — ‘Lovebird’ — whose wedding shower was held recently. It’s a sweet, strawberry twist on the more traditional lemon meringue pie, using my all-butter pie crust recipe. Give it a try and you will feel the love.

To end up with two cups of cooked strawberries, you’ll want to start with about four cups (or more) of fresh ones. Thoroughly wash strawberries and remove stems. Place strawberries in a pot, cook and stir over medium heat until strawberries have broken down into a sauce. Set aside and allow to cool.

Separate egg yolks from whites, reserving both, and allow whites to come to room temp for meringue.

While the strawberries are cooling, you can begin to make the crust. (This crust recipe makes dough for two pies. Half the ingredients for one.)

Place frozen butter cubes, 2 cups flour, 1/2 teaspoon salt and 2 teaspoons sugar in food processor. Pulse until butter is broken apart and mixture is crumbly and fine. Add the ice water one tablespoon at a time, pulsing the food processor in between, until mixture just forms a dough. (Add enough water that it holds the dough together, but not so much that it makes it sticky.)

Put the ball of dough on a lightly floured surface (I like to use a pastry cloth when I can, but doing it on the counter top works well too) and dust the top with flour as well. Roll out into a nice flat circle, flipping once between if needed, until just large enough for a 9-inch pie plate.

Preheat your oven to 475 degrees. Poke holes in the pie shell with a fork. Next, give the pie shell a very light dusting of cooking spray.

Weigh crust down with 2nd pie dish or ceramic pie weights. I recommend not using a glass pie dish.

Bake the crust for about 8-10 minutes. Remove upper pie tin (it will be steamy… wear oven mitts). Place crust back in oven for another 2-3 minutes, until it is just starting to become crispy and golden.

While the crust is cooking, combine the 2 cups cooked strawberries, 1 1/2 cups sugar and 1/3 cup cornstarch in a medium sized sauce pot. Cook over medium/high heat until mixture boils and thickens. Whisk the egg yolks. Add about 1/3 of the hot strawberry-sugar-cornstarch mixture to the egg yolks, whisk to combine, then add this back to the remaining strawberry-sugar-cornstarch mixture in the sauce pot, stirring all the while. Continue stirring as you cook the mixture over medium heat for an additional two minutes. Add the butter and lemon juice. Stir until butter is melted, then remove from heat. Pour filling into pie crust.

Preheat your oven to 350 degrees. Top the filling with your favorite meringue recipe (I used one from the Betty Crocker cook book) being sure to spread the meringue to the edges of the pie crust. This will ‘seal’ the meringue to the pie so that it doesn’t shrink while baking.

Place the pie in the oven for about 12 minutes, or until the meringue begins to brown a bit on top.

Remove from oven and allow to cool in the refrigerator for at least 4 hours (but longer, if you can resist) before serving.

I made this pie awhile ago, and i was quite happy with it. It was pretty easy to put together, and very, very rich when finished! My uncle liked the taste but not the texture; he thought it would be like a strawberry jello pie. I liked it as is. More for me, so that’s good! I had some leftover filling, so I put it in a ramekin and topped it with meringue and ate it that way. Next time I make it, I might just cut it in half and freeze some of the filling so I can have a little wee one when I like.

I made this pie for company and it was a big hit! It was even better the second day when all the flavors had time to get acquainted! I would definitely make it again. I tweaked it a little by adding 1 cup of sugar to the strawberry mix instead of a cup and a half. It was perfectly sweet and did not need the extra half cup. Might have even been ok with less!

oh my – I’m feelin’ the love and I haven’t even tried the pie!

Holy moly that looks SO good.

I’m so excited to try this for an upcoming party!

Our members have the best ideas for food gifts. Like this one!
END_OF_DOCUMENT_TOKEN_TO_BE_REPLACED

Put that slow cooker to work and rest easy knowing you have a warm meal waiting for you at the end of the day!
END_OF_DOCUMENT_TOKEN_TO_BE_REPLACED