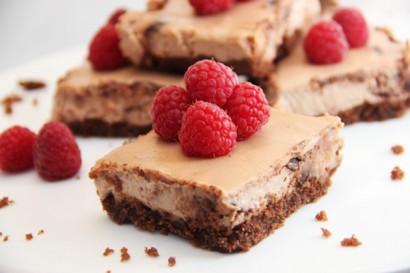 Prepare the fruit topping first. Combine raspberries and agave nectar in a small bowl. Store in the fridge, allowing the berries to macerate (release their juices).

For the crust, combine the all-purpose flour, whole wheat flour, egg whites, canola oil, almond butter, cocoa powder, and sugar in a food processor. Pulse until the dough is well combined. Carefully press the dough along the bottom of an 8 x 8-inch pan. Bake in the oven for 15 minutes. Set on the counter to cool for about 15 minutes.

In the meantime, prepare the filling.

In a large bowl, combine strained Greek yogurt, Neufchâtel, sugar, egg, and cocoa powder. Mix with a hand blender until filling is smooth and creamy. Using a spoon, carefully fold in dark chocolate chips. Spoon filling over cooled crust. Bake in the oven for 20 minutes. Set on the counter to cool for at least 1/2 hour.

Cut cheesecake into 9 squares. Top each square with several of the sweetened raspberries.

More Recipes from The Scrumptious Pumpkin 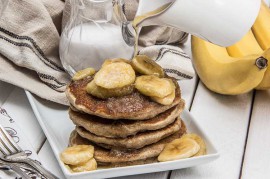 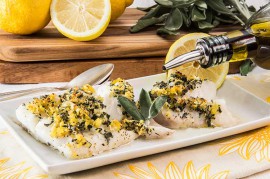 Find The Scrumptious Pumpkin elsewhere on the web.

You had me at “guiltless.” And the picture grabbed me…..

Our members have the best ideas for food gifts. Like this one!
END_OF_DOCUMENT_TOKEN_TO_BE_REPLACED

Put that slow cooker to work and rest easy knowing you have a warm meal waiting for you at the end of the day!
END_OF_DOCUMENT_TOKEN_TO_BE_REPLACED