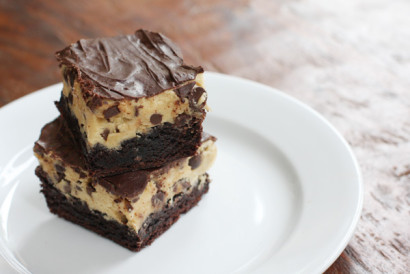 Whisk in the sugar and then the eggs and vanilla until well combined and smooth. Whisk in the remaining butter and salt.

Switch to a fork or spoon and stir in the flour until combined. Pour the batter into the greased baking dish and place in the oven to bake for 35-40 minutes, until just set and the edges are starting to pull away from the pan. Remove pan from the oven and set it on a rack. Let brownies cool completely in the pan.

While the brownies are cooling, make the cookie dough layer. In a large mixing bowl, beat together the melted butter and sugars until smooth and fluffy, about 3-4 minutes. Mix in the salt, vanilla and milk until combined.

Mix in the flour and chocolate chips until just combined. Spread the cookie dough evenly over the now cool brownies in the pan. Place the pan into the fridge to chill while you make the glaze.

In a smallish, microwave-safe bowl, melt the chocolate chips with the oil, stirring well every 30 seconds and continuing to heat in 30 second increments until just smooth. Spread evenly over the cookie dough layer and return to the fridge to continue chilling.

Make these brownies at least a few hours (or up to a few days!) before you want to serve them, for best results. And cut them small … they are (obviously!) very rich! 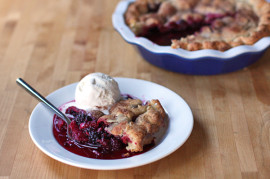 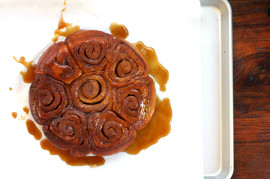 These are amazing! The only thing I would change is to take them out of the fridge plenty before you want to eat them, otherwise, they’re hard as a rock and are very hard to cut until they soften. Thanks for sharing this recipe! They are super-delicious!

It may be tough to agree on which movie to watch, but an incredible snack is something everyone will love!
END_OF_DOCUMENT_TOKEN_TO_BE_REPLACED

Put that slow cooker to work and rest easy knowing you have a warm meal waiting for you at the end of the day!
END_OF_DOCUMENT_TOKEN_TO_BE_REPLACED 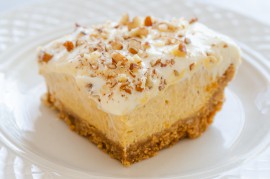 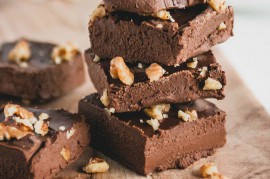 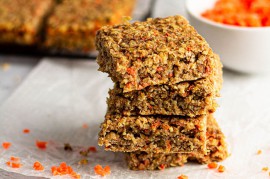 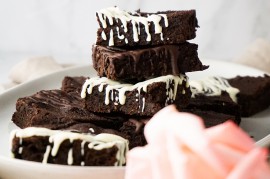 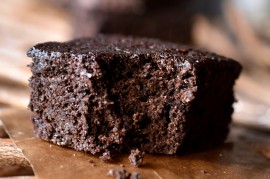