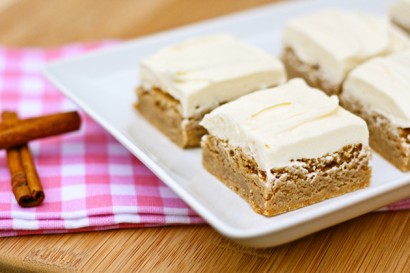 Chewy cinnamon blondies are topped with my favorite vanilla buttercream.

Preheat oven to 350 F. Line an 8×8 inch metal pan with foil and allow two ends of the foil to hang over the dish (you’ll use the foil as a handle to remove the blondies when done). Spray foil with non-stick cooking spray, and set aside.

Sift the flour, cinnamon, and salt into a large bowl, and set aside.

Place the butter, dark brown sugar, and white sugar into a small saucepan. Cook on medium low heat, stirring frequently until the butter and sugars melt and start to bubble (do not let the mixture boil.) Remove pan from heat and set aside to cool for 15 minutes, stirring occasionally.

Transfer cooled butter mixture to a medium bowl, and whisk in whole egg, egg yolk, and vanilla extract. Pour the wet ingredients over the flour mixture, and stir until just combined, and no flour streaks remain. Transfer batter to the prepared pan, spreading it to cover the entire pan. Bake for 20-25 minutes, until golden around the edges and no longer jiggly.

Place pan on a wire rack, and cool completely before removing blondies from the pan.

Remove blondies from the pan using the foil ‘handles’. Spread frosting over the top of the blondies and cut into 16 bars.

More Recipes from Maggie of A Bitchin' Kitchen 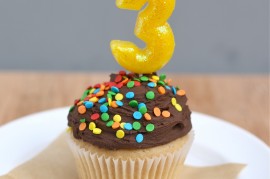 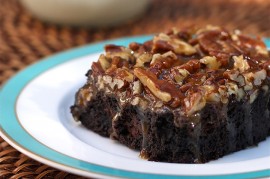 Find Maggie of A Bitchin' Kitchen elsewhere on the web.

Delicious! Just be careful with the directions. Maybe this is due to the humidity where I live, but once my sugar melted, it turned to carmel even though it never boiled. I redid it and left the sugar grainy, which worked fine. Also, I had to bake mine for at least 10min longer than the recipe said because they were complete dough in the middle. With the slight alterations, I’ll make them again for sure!

Very good! Chewy and a nice change from a chocolate brownie.

Our members have the best ideas for food gifts. Like this one!
END_OF_DOCUMENT_TOKEN_TO_BE_REPLACED

Put that slow cooker to work and rest easy knowing you have a warm meal waiting for you at the end of the day!
END_OF_DOCUMENT_TOKEN_TO_BE_REPLACED