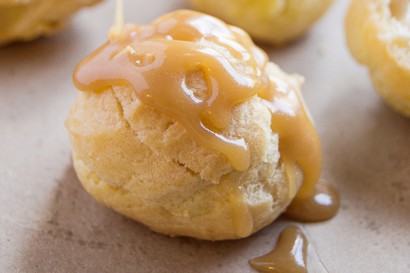 These tiny puff pastries are light and delicate. Stuffed with homemade apple pie cream and topped generously with caramel sauce.

For the filling: In a small bowl toss the diced apples in lemon juice. Set aside.

Combine the sugar, flour, cinnamon, nutmeg, and milk in a medium saucepan over medium heat. Whisk until smooth. Add apples and cook over medium heat until the mixture thickens and begins to boil, stirring constantly. Remove from heat.

Beat the egg yolks in a medium sized bowl until thick and pale. Gradually add 1/4 of the hot apple mixture to the yolk, stirring vigorously after each addition. Add the tempered egg yolks to the remaining hot mixture in the saucepan, stirring constantly. Bring the mixture back to a boil over medium heat, and cook for 3 minutes. Stir constantly. Remove from heat. Stir in the vanilla extract. Cover with plastic wrap and refrigerate.

For the puff pastry: Preheat oven to 400 F. In a large pot, combine the water and butter. Bring to a boil over medium heat. Add the flour and salt. Stir vigorously until the mixture no longer sticks to the sides of the pan and forms a ball. Remove from heat and let it cool for 5 minutes. Add the eggs, one at a time, stirring thoroughly with a wooden spoon after each addition. After the final egg, beat mixture until smooth. The mixture will be a thick paste. Use a small cookie scoop to drop the batter onto a parchment paper lined baking sheet leaving an inch or two between each.

Bake for 25 minutes or until puffed and golden. Remove from oven. Allow them to cool away from drafts.

Cut the tops off of the pastries, remove the dough soft dough inside, and spoon the filling into the cavity. Replace the tops.

For the topping: Melt butter in a small saucepan over medium heat. Add brown sugar and salt and stir well with a silicone spatula. Bring mixture to a boil over medium heat. Stir in evaporated milk and let the mixture boil for 2 minutes. Remove from heat and stir in vanilla. Drizzle caramel over the profiteroles.

More Recipes from Jen | Baked by an Introvert 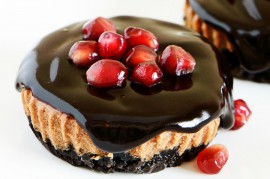 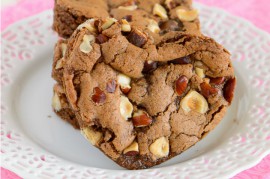 Find Jen | Baked by an Introvert elsewhere on the web.

It may be tough to agree on which movie to watch, but an incredible snack is something everyone will love!
END_OF_DOCUMENT_TOKEN_TO_BE_REPLACED

Here's a quick and easy dish for those busy nights. Be a hero in 30 minutes or less!
END_OF_DOCUMENT_TOKEN_TO_BE_REPLACED

by Lindsay @ My Therapist Cooks in Desserts
Super yummy and easy blondies made in one bowl with no...
0.00 Mitt(s) 0 Rating(s)