This version of twice baked potatoes is rich and yummy. I’ve been making them for years and my family thinks they are the world’s best.

This recipe gives the quantities for 1 baked potato which will yield 2 twice baked potatoes.

Obviously, you’ll be making lots more than just one, so just adjust the quantities of ingredients proportionally to the number of potatoes you’ll be using!

*Rub outside of each potato with uncooked bacon. This will give the potatoes a crisp savory skin. (Don’t bother pricking them with a fork before cooking or wrapping then in foil.)

*While potatoes are cooking, cut bacon into small pieces and saute until crisp. Remove and drain on paper towels.
Pour off most of the bacon grease (allow approximately 1 1/2 T. fat per potato.

*Saute the green onions in the bacon grease for about 5 minutes.

*When potatoes are done, remove from the oven. Cool slightly and cut in half, or if your potatoes are on the small side, just cut off the very top. Scoop out the inside and add to the pan with the onions.

*Mash the potatoes while stirring in all the other ingredients. *The salt and pepper measurements are just suggestions. Season to taste. (Don’t forget the reserved crisp bacon!) You can also do this in a large bowl and mix with an electric mixer, –just be careful, you don’t want the potato mixture to become smooth. The “chunkiness” is part of the appeal of this dish.

*Place potatoes on a baking pan and heat in a 350 degree oven until nice and toasty!

You can make these 2-3 days before serving. Just cover well and put in fridge. (However, don’t freeze.) Allow them to come to room temperature before baking.

I am addicted to potatoes and this sounds wonderful! Can’t wait to try out this version sometime soon.

Our members have the best ideas for food gifts. Like this one!
END_OF_DOCUMENT_TOKEN_TO_BE_REPLACED

Put that slow cooker to work and rest easy knowing you have a warm meal waiting for you at the end of the day!
END_OF_DOCUMENT_TOKEN_TO_BE_REPLACED 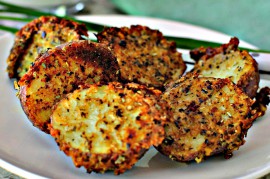 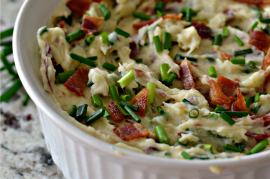 by Beth Pierce in Sides
Garlic Mashed Potatoes with Bacon and Chives is a heavenly combination...
0.00 Mitt(s) 0 Rating(s) 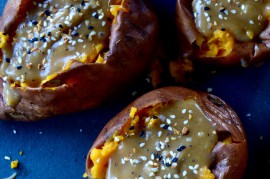 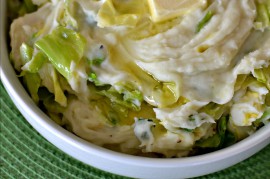 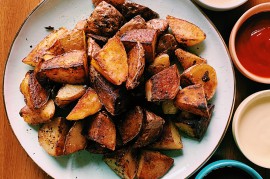